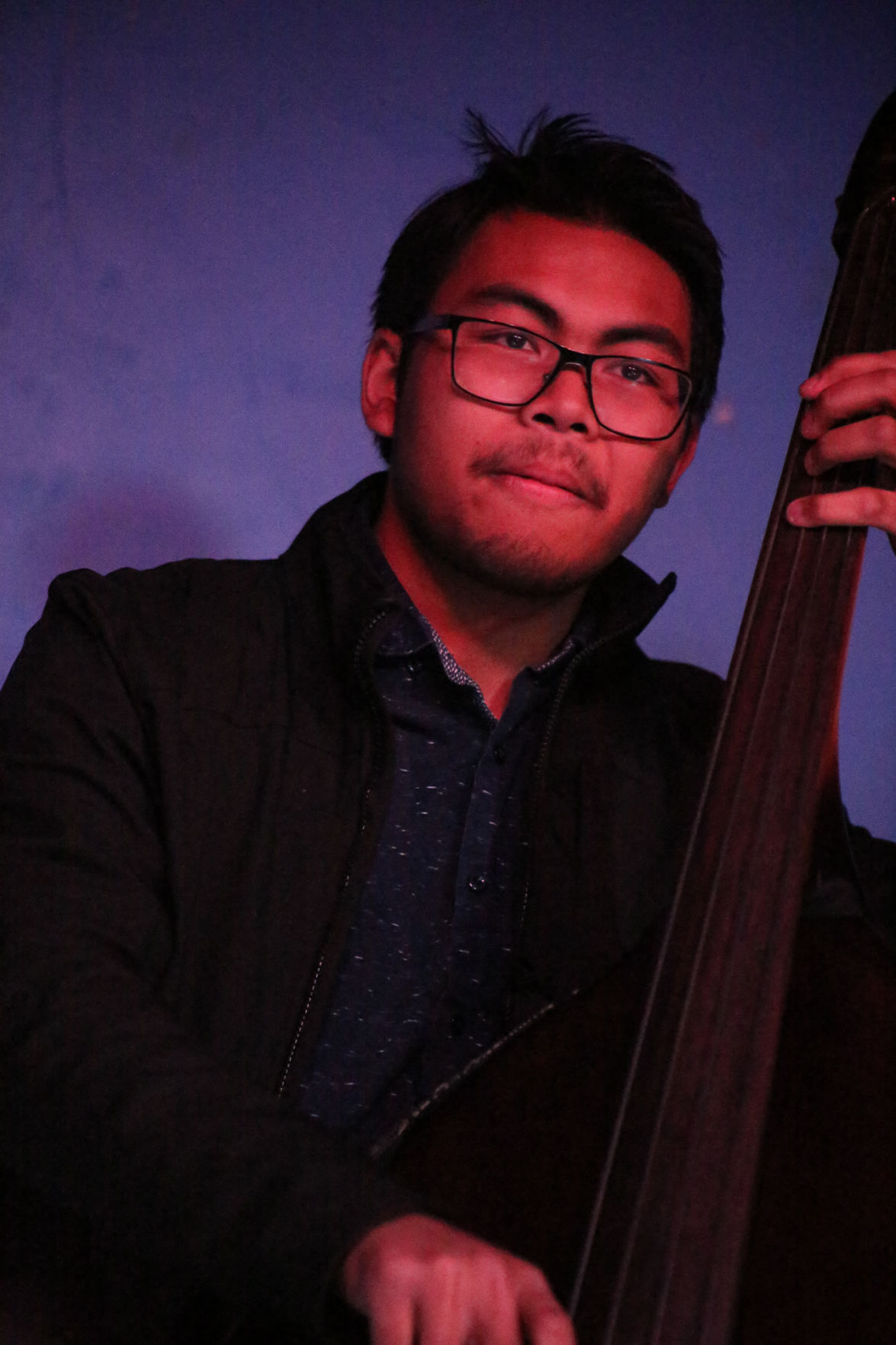 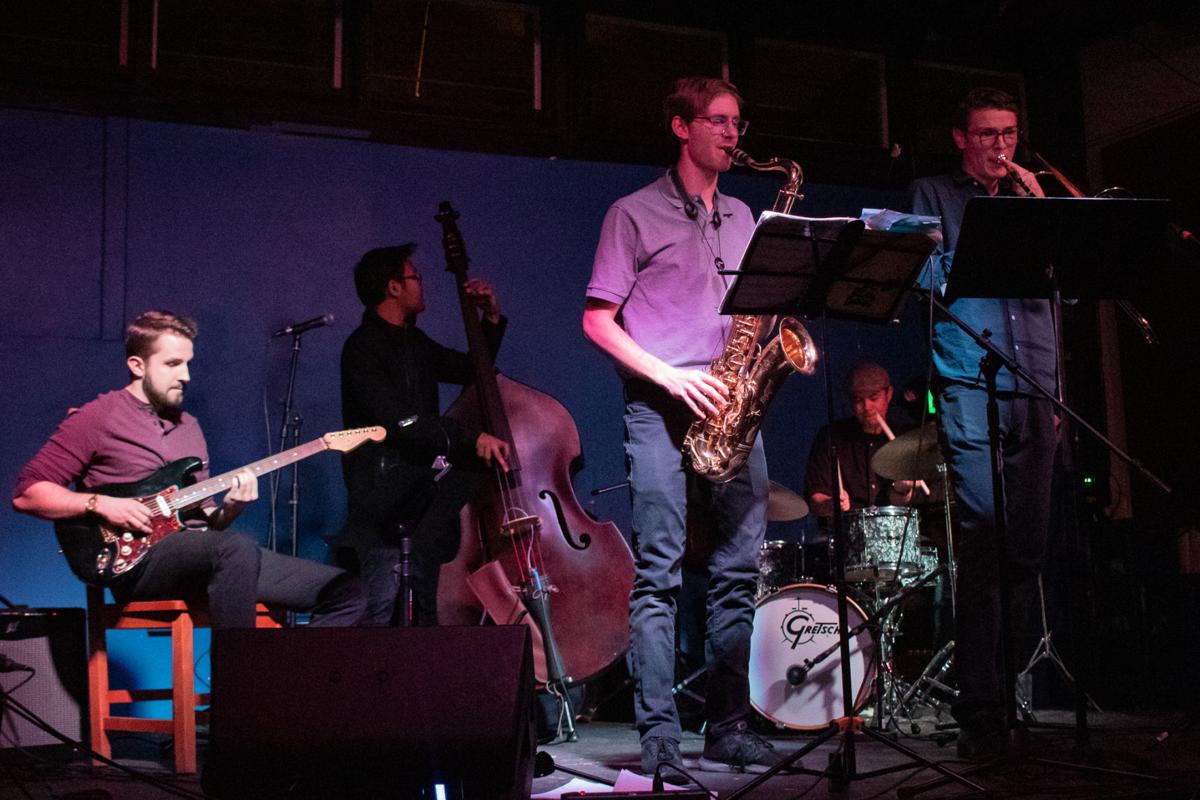 Jazz has been a staple genre within the music industry since the late 19th and early 20th centuries, and has featured legendary artists such as Louis Armstrong and Billie Holiday. Although the genre has seen a decrease in popularity during the 21st century due to the rise of pop music, there are still some who are working to keep the legacy of jazz alive, even in Flagstaff.

The event lasted from 8 p.m. to 11 p.m. and drew a large crowd, which consisted of college students and other adults, including Tucson local Jackson Baine. He said he was initially drawn to the event by a friend who mentioned it. He has seen other jazz bands perform, but he enjoyed the quintet’s transitions most.

“I’m not really a musician, but I appreciate jazz music and I like to see it every opportunity I get,” Baine said. “To be honest, it’s rare to hear it here in Flagstaff.”

During the first half of the set, the quintet played numerous classical jazz standards. However, during the second half of the set, after a brief intermission, the group switched to playing jazz renditions of modern hits, like “For Free” by Kendrick Lamar. Eventually, two audience members got up from their seats to dance in the back of the room where the makeshift dance floor was located.

Nakamoto, the leader of the quintet, said the group was formed early this year. However, he picked the group members because he has known them for a long time and has performed with each one individually.

Nakamoto has been playing the upright bass since he was in sixth grade, however, he was not introduced to jazz until his freshman year of high school.

“When I was 14, I bought this game called Grand Theft Auto IV and in the game, they have fictional radio stations you can listen to,” Nakamoto said. “There was one called Jazz Nation Radio and it was like my introduction to jazz because they played artists like Duke Ellington, [John]Coltrane, Miles Davis and Count Basie.”

Nakamoto said the game also introduced him to jazz-style bass playing, known as bassline. He became obsessed with the style of playing and for a year he tried to figure out the harmonics of it.

In addition to playing at Firecreek, Nakamoto played over 100 shows last semester, which included being a substitute for the Phoenix Symphony. He said he finds it hard to balance school and performing, but as a classical double bass performance major, now that he’s done with his general education courses, he can focus on the performance aspect of his major. He also said he tries to be as disciplined as he can when it comes to practicing and that he keeps a practice journal.

One of Nakamoto’s main inspirations is jazz pianist and bassist Charles Mingus. He said Mingus was one of the first jazz musicians he became obsessed with because of the way he played, and that he was a musician of color during the era of segregation.

Nakamoto said his main goal after he graduates in 2021 is to pursue his master’s degree. He also said he hopes to perform on a motion picture soundtrack and be an educator who can get people excited about music while showing his passion for it.

When it comes to coordinating events at Firecreek, booking agent Sandra Lee said she tries to pick acts that will draw a crowd.

“We like to promote new, local music and offer a unique experience,” Lee said. “We want the concertgoer to have a great night and we want to have the reputation of stellar music.”

Lee also said she picked the quintet to perform because Firecreek aims to give local jazz enthusiasts a place to listen to music while in a venue with an inviting atmosphere.

Overall, Nakamoto wants listeners to understand that jazz is a genre that has its roots in traditional African American music and blues.

“It’s a music genre born out of oppression and we need to understand that,” Nakamoto said. “It’s a very important genre because of what it symbolizes, and we need it.”

Firecreek’s next Jazz Night with the Eric Nakamoto jazz quintet will be held March 21 from 8 p.m. to 11 p.m.