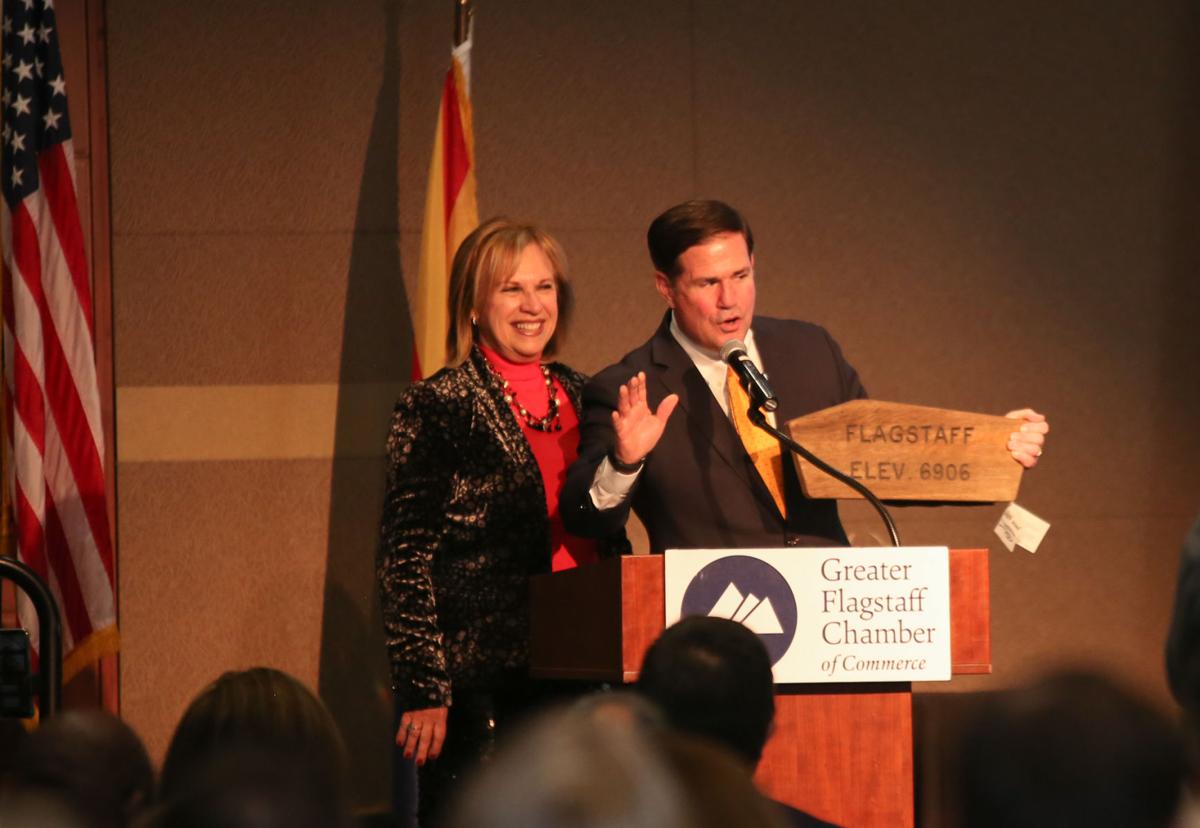 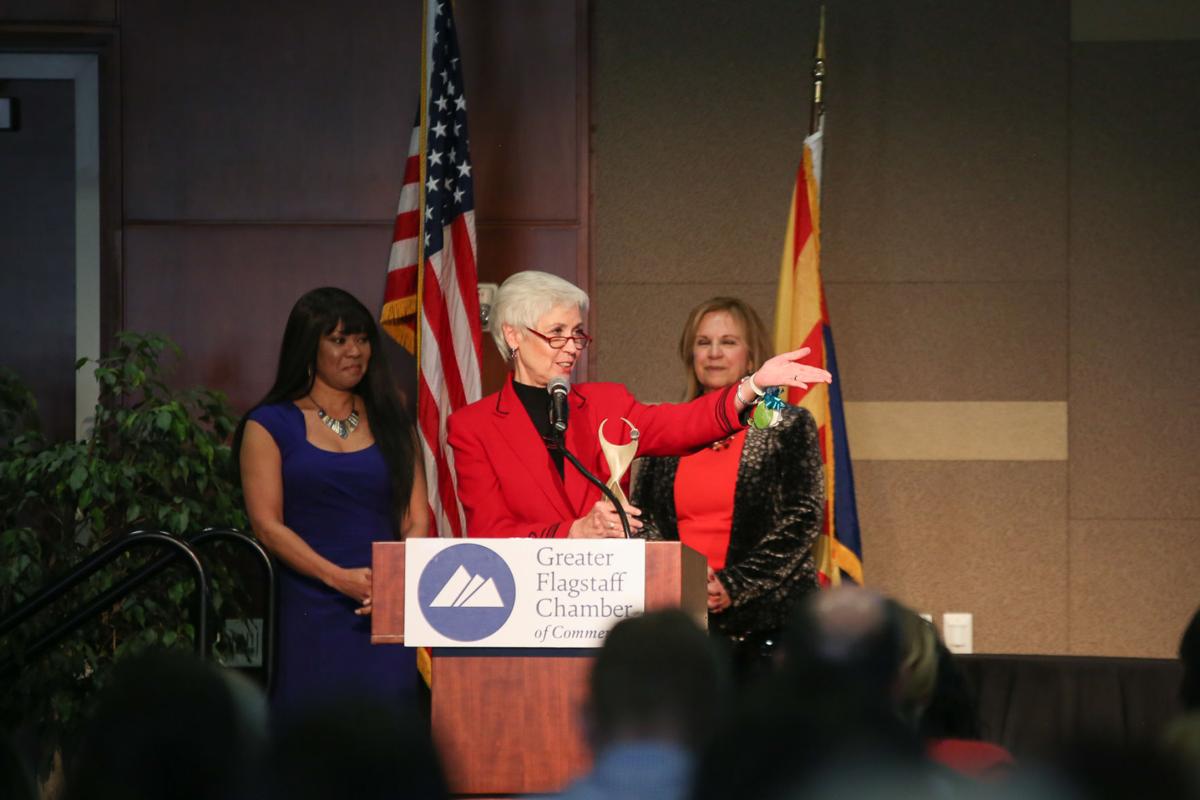 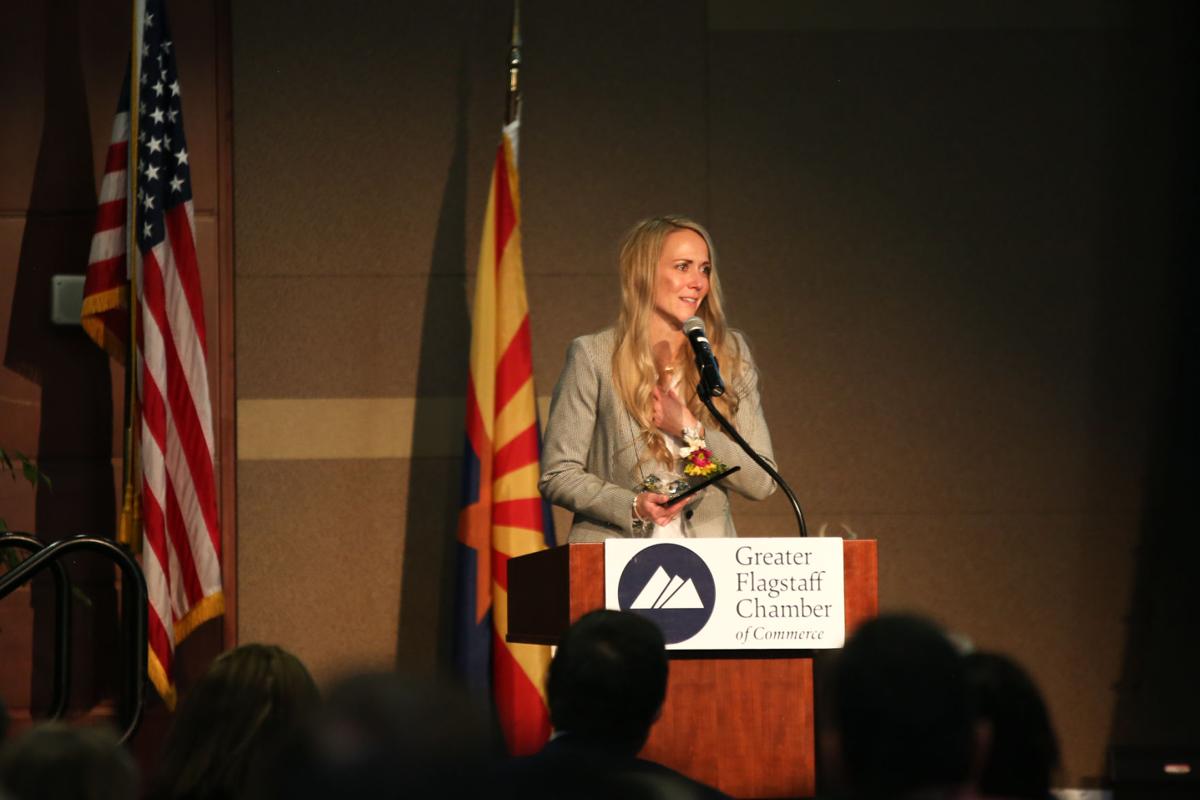 The Greater Flagstaff Chamber of Commerce hosted the 2020 ATHENA Awards that took place at High Country Conference Center. The ATHENA Awards are part of an international program honoring female leaders who exemplify the tenets of the award: excellence in her field, serving the community and mentorship.

Chamber of Commerce President Julie Pastrick served as emcee for the event with the help of several invited guests, including Arizona Gov. Doug Ducey and Sen. Martha McSally.

Pastrick welcomed everyone, provided an overview of the event and an explanation of the unique shape of the ATHENA Award.

“The base is solid marble, signifying the foundation these women are to their communities,” Pastrick said. “The bronze arms reaching out signify the caring nature of the recipients. The crystal signifies the multi-faceted talents these women possess.”

McSally led the sold-out crowd in the Pledge of Allegiance and later assisted Pastrick in introducing the nominees for the Young Professional Award. Many current and former elected officials, like Flagstaff Mayor Coral Evans, were present, along with local businesses owners and representatives from NAU.

Pastrick said the Greater Flagstaff Chamber of Commerce is the largest in the state with over 1,000 members. The support and excitement for the chamber and the awards were palpable.

Ducey, Arizona’s 23rd governor, delivered the keynote address. He spoke of his administration’s accomplishments in balancing Arizona’s deficit and the removal of 18 boards and commissions.

Ducey outlined some of his plans for the state, including the widening of Interstate 17 and investing in K-12 education.

“I hope people don’t think this is a self-serving plan, because I’ve made that drive hundreds of times and this will make it easier,” Ducey said.

“The last time I was there, I was watching a movie with my family. You would never know it had been a theater, except when I went to the kitchen, it smelled like popcorn,” Ducey said. “This opportunity for recognition is well deserved.”

The 15 nominees have achieved excellence in professional leadership through careers and community service that demonstrated their success. This was the sentiment among everyone in the room, as the process to be nominated is lengthy and involved. Each nominee could have received the award. Many of these women did not prepare a speech, presuming another nominee would receive the award.

DancEvolution owner Jesica Barker received the 2019 Young Professional Award. Overwhelmed and emotional from the announcement, Barker was still all smiles as she gave a brief and sincere acceptance speech.

“Watching the girls achieve their goals is what fills my heart,” Barker said. “It’s why I do what I do. Also, thanks to the love and support of my own family, my husband and my own girls.”

Many past nominees and recipients were in attendance, including Theresa Bierer, a professor at the W. A. Franke College of Business. Bierer was the 2017 recipient of the ATHENA Award.

“A lot of women don’t trust other women,” Bierer said. “We need to support each other. We don’t have to step on the backs of others to achieve our goals.”

With the help of the 2018 ATHENA Award recipient, Christina Caldwell, all the nominees were presented. Pastrick tried to hold suspense while announcing the recipient of the award. However, when Pastrick said the recipient has worked in male-dominated fields, it became clear that Smith was the winner.

Smith joins the ranks of other recipients who did not prepare a speech. She humbly accepted her award and began by speaking to the caliber of the other nominees. She said she was honest about her “shock,” and not believing it would be her to receive the award. Smith went on to thank many other women who make wonderful contributions, like Caldwell, president of the CCC Foundation, helping provide scholarships to students.

“I feel like my husband and I have been welcomed into this community from the very beginning and been given so many opportunities to serve,” Smith said.

Later, Smith offered a piece of advice for the other nominees and everybody in the audience.

“Trust yourself,” Smith said. “It’s important to listen to your intuition. Also, find what you’re passionate about. I did. The community college is so meaningful to me and I love being there.”

With all the expertise, energy and support in the room, it was clear why the event had sold out. The ATHENA Awards ceremony is not about one person, it is about all the people who make a community thrive.