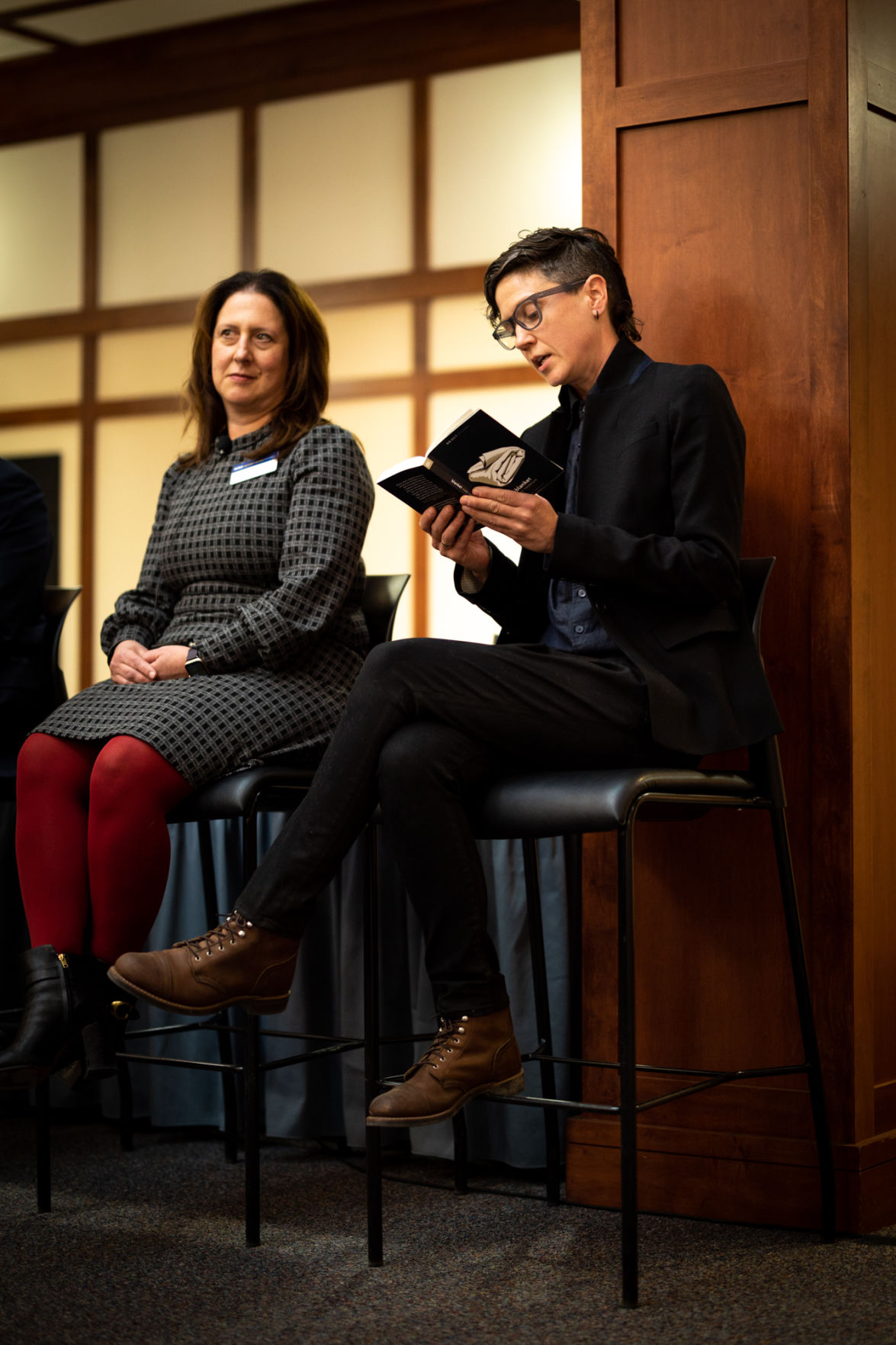 Lori Poloni-Staudinger (left) listens as KT Thompson, author of “blanket,” reads a passage from their book at the NAU Book Authors Event at the Cline Library on March 4. 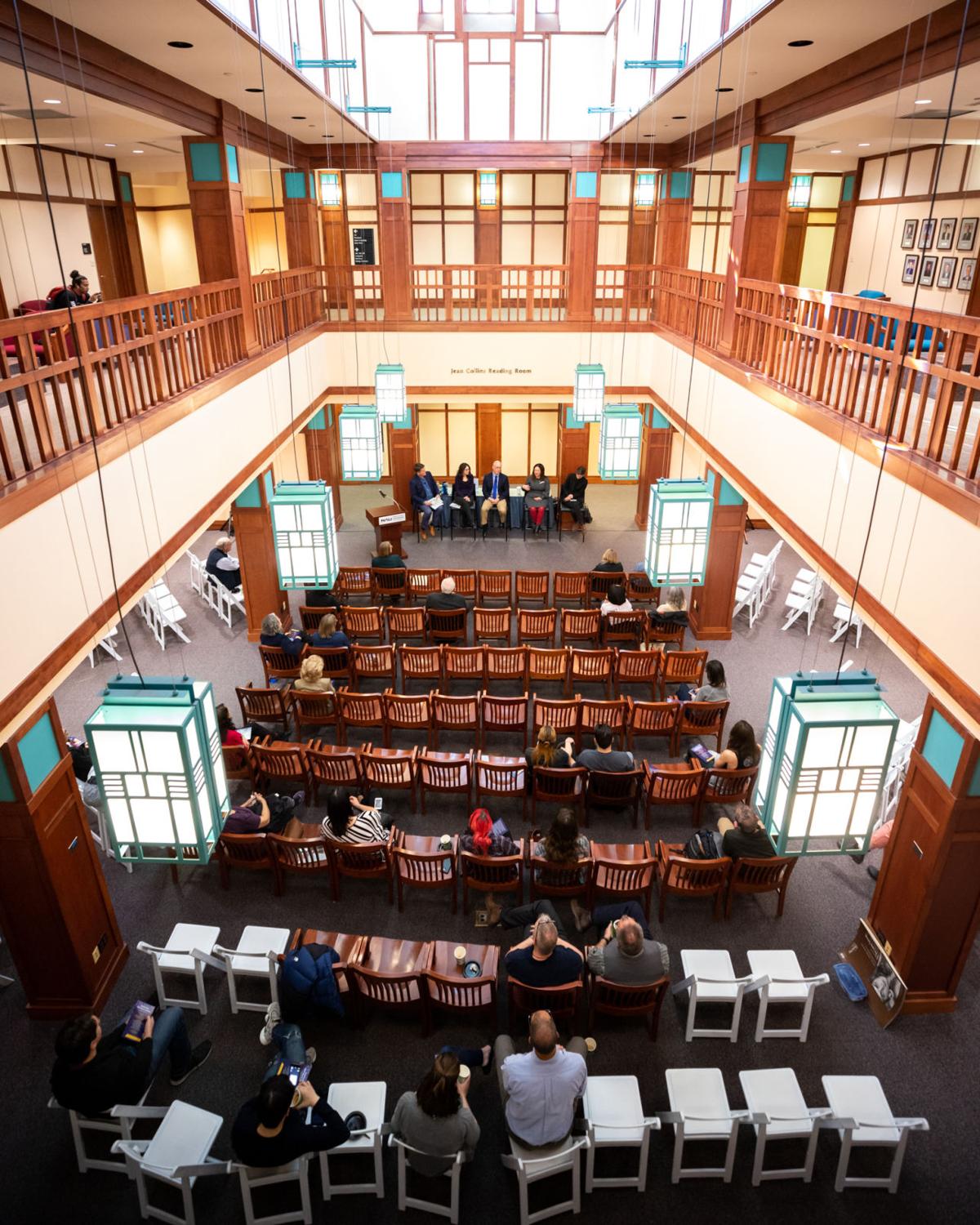 Lori Poloni-Staudinger (left) listens as KT Thompson, author of “blanket,” reads a passage from their book at the NAU Book Authors Event at the Cline Library on March 4.

Becoming an author is no small feat and this past week, NAU honored those on campus who have had their words published. Cline Library director Kathleen Schmand helped facilitate the first NAU book authors event and panel celebrating their work.

Among those featured was Lori Poloni-Staudinger, a professor in the Department of Politics and International Affairs, and an associate dean in the College of Social and Behavioral Sciences.

Poloni-Staudinger said she and her co-authors, J. Cherie Strachan, Candice D. Ortbals and Shannon Jenkins, were compelled to write “Why Don’t Women Rule the World? Understanding Women’s Civic and Political Choices” because they were unhappy with other similar books on the market.

The book highlights how the underrepresentation of women manifests within politics and the impacts this has on government policy. Poloni-Staudinger also wrote it with women’s interests in mind.

“We were also concerned with the trends showing a drop off in political ambition among women in the late high school and early college years,” Poloni-Staudinger said. “Thus, we wanted to write the book that we wanted to teach.”

Janine Schipper, NAU professor of sociology and social work, also wrote a book grounded in her teaching beliefs called “Teaching with Compassion: An Educator’s Oath to Teach from the Heart.”

Schipper and co-author Peter Kaufman based the book on an eight-point oath about teaching with compassion.

Schipper comes from a background of working on compassion projects, so when Kaufman reached out and suggested the title “Teaching with Compassion,” Schipper knew it would be an ideal fit. She said the message of her and Kaufman’s work is clear.

“‘Teaching with Compassion’ offers educators a rationale and a blueprint for teaching with kindness, generosity and concern for all students,” Schipper said.

Both Schipper and Poloni-Staudinger shared an experience unique to published authors — the long process it takes to get one’s words to print.

“It took about two years from idea to publication,” Poloni-Staudinger said. “The hardest part was the coordination of writing schedules among four authors.”

With so much effort going into a book, Schipper found reward in the process itself. She said she had never worked on that type of project with another sociologist before, and was inspired by the brainstorming process.

Schipper said they faced challenges during the book’s publication.

“The most challenging part of writing this book came two months after its publication when Peter passed away,” Schipper said. “Peter was a man of enormous creativity and sociological insight, coupled with care, thoughtfulness and compassion.”

Sophomore Derick Atkins was in attendance at the panel and admired the care that the authors showed for their work.

“It’s inspiring to see how passionate they are about their work and the dedication they had,” Atkins said.

Schipper said she is currently writing a book about the relationships people have with water throughout the arid Southwest. She has also published other books about the environment, such as “Disappearing Desert: The Growth of Phoenix and the Culture of Sprawl.” Poloni-Staudinger has also written three other books on the topic of social injustice in America.

For Poloni-Staudinger, the writing process is always ongoing.

With the many accomplishments accumulated by Poloni-Staudinger, Schipper and the other distinguished professors that spoke at the panel, the event provided an opportunity for them to be honored for their work.