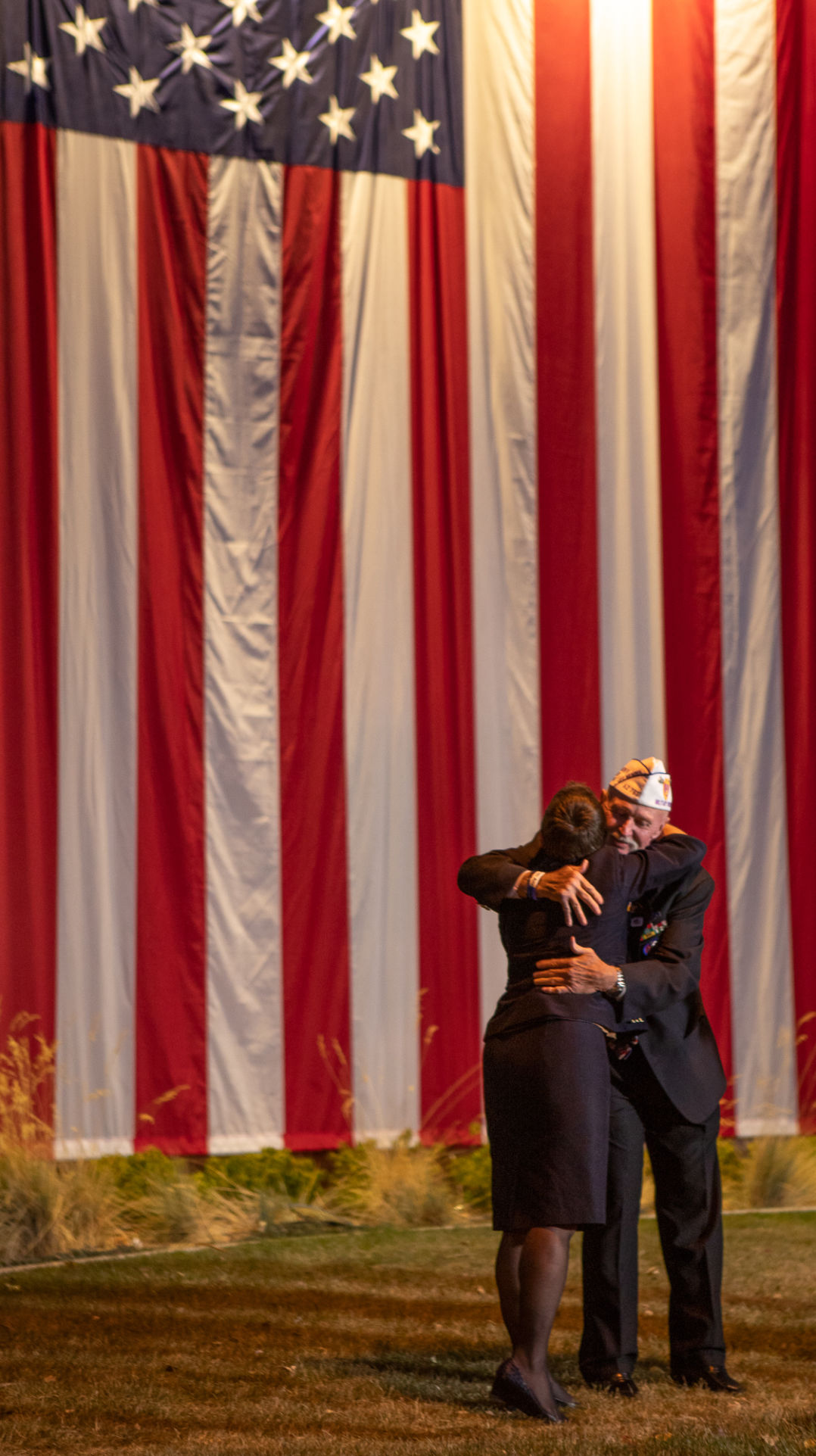 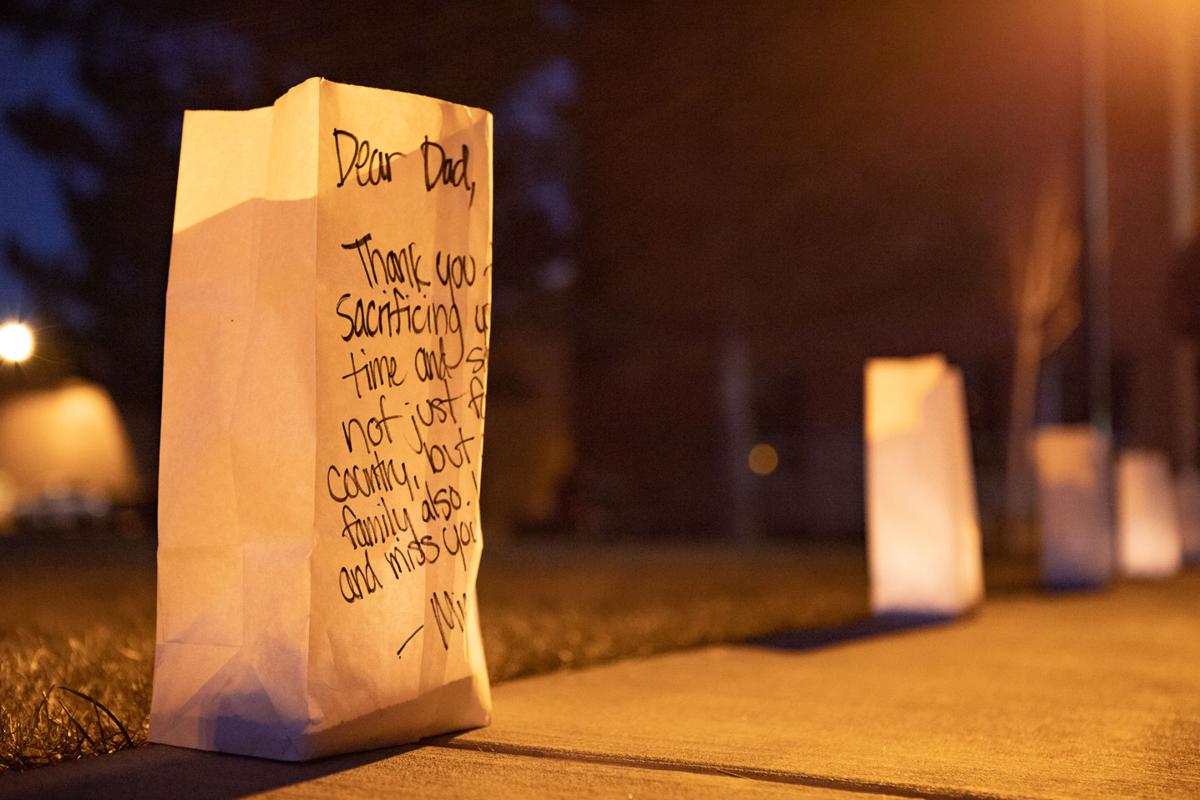 Lighted luminarias with messages of gratitude line the walkway at the 4th annual Veterans Flag Tribute at NAU, Nov 5.

Lighted luminarias with messages of gratitude line the walkway at the 4th annual Veterans Flag Tribute at NAU, Nov 5.

NAU hosted its fourth annual Veterans Flag Tribute, honoring and thanking community and student veterans. Flag Tribute hosted veterans, many of whom grew up in Flagstaff, to share what being a veteran means to them. This event was also held to celebrate NAU being honored as a Purple Heart University.

The event began with a moment of silence and prayer for soldiers who lost their lives while serving. A veteran honor song and traditional Native American piece were performed by Rick Yazzie and the Battle Lake Singers. Pete Yanka, director for Veteran and Military Services at NAU, said it was an honor to have the band perform, because it acknowledged that Native Americans have a high serving percentage in the military.

There were luminaries set along pathways leading to the event, which took place at the University Union on campus. Yanka said the luminaries represented NAU’s mission for veterans to be part of the community, lighting a pathway home for them.

There were many diverse speakers at the event, including representatives of the Native American veteran community and Meg Mosely, who fought among men as one of the first women in the United States Army.

Speaker Rodger Ely described Veterans Day as not only a solemn occasion but a celebration. He said it is a day that we set aside to not only recognize those deployed but those that might join in the future and those who served in the past.

Ely said his father served in Guadalcanal during World War II, he served in Vietnam and his son served in Iraq as a U.S. Marine.

“I spent all of my time trying to support veterans,” Ely said. “I’m so proud to see that so many others do the same thing. I do it because, before I came back from Vietnam, I had friends that planned with me to do things when we got out ... They didn’t make it, and what I’m doing today is what they would’ve been doing. So to me, I’m supporting the people that didn’t come back — the friends who are still in Vietnam.”

Yanka said NAU was recently honored as a Purple Heart University because of a high number of veteran support organizations within the community. NAU President Rita Cheng, along with fellow veteran Ed McGlynn, read the official proclamation.

Cheng said the university has great staff members who help veterans transition from military to civilian life. She said the school agreed to becoming a Purple Heart University right away, as it seemed like a natural fit.

“We have a history of embracing veterans and their families, and we are so proud of veterans who graduate NAU,” Cheng said at the event. “I often think of NAU as being a big family, and we embrace diversity and people from all over the world. This is another dimension of that. We embrace veterans who have been in various military experiences, and they can come in and assimilate and be part of our family.”

Yanka said the event had two key takeaways: to respectfully thank veterans who have served and to share the diversity of the veteran experience with the NAU community so that it can become more aware of what student veterans may have gone through. He said Veterans Day is a way of showing appreciation for others who made sacrifices for the country and embedding their legacies forever.

“I guess, as a humble civilian, one thing that I would encourage fellow civilians to do is to take some time on that day,” Yanka said. “I know life can get busy, and it’s nice to have a day away from school or work, but really make space in that day to understand it is a day of appreciation for those who have served, whatever that may look like ... I think what makes the day more meaningful is when you reflect on the fact that there are folks that stepped up and said yes.”

Flag Tribute was just one way that NAU and the city were able to show pride and salute those who fought or currently fight for the country. Veterans Day is different for everyone, but acknowledgment should remain consistent. Some students may not relate to Veterans Day, but taking a moment to think about those who made sacrifices for this country is worthwhile.