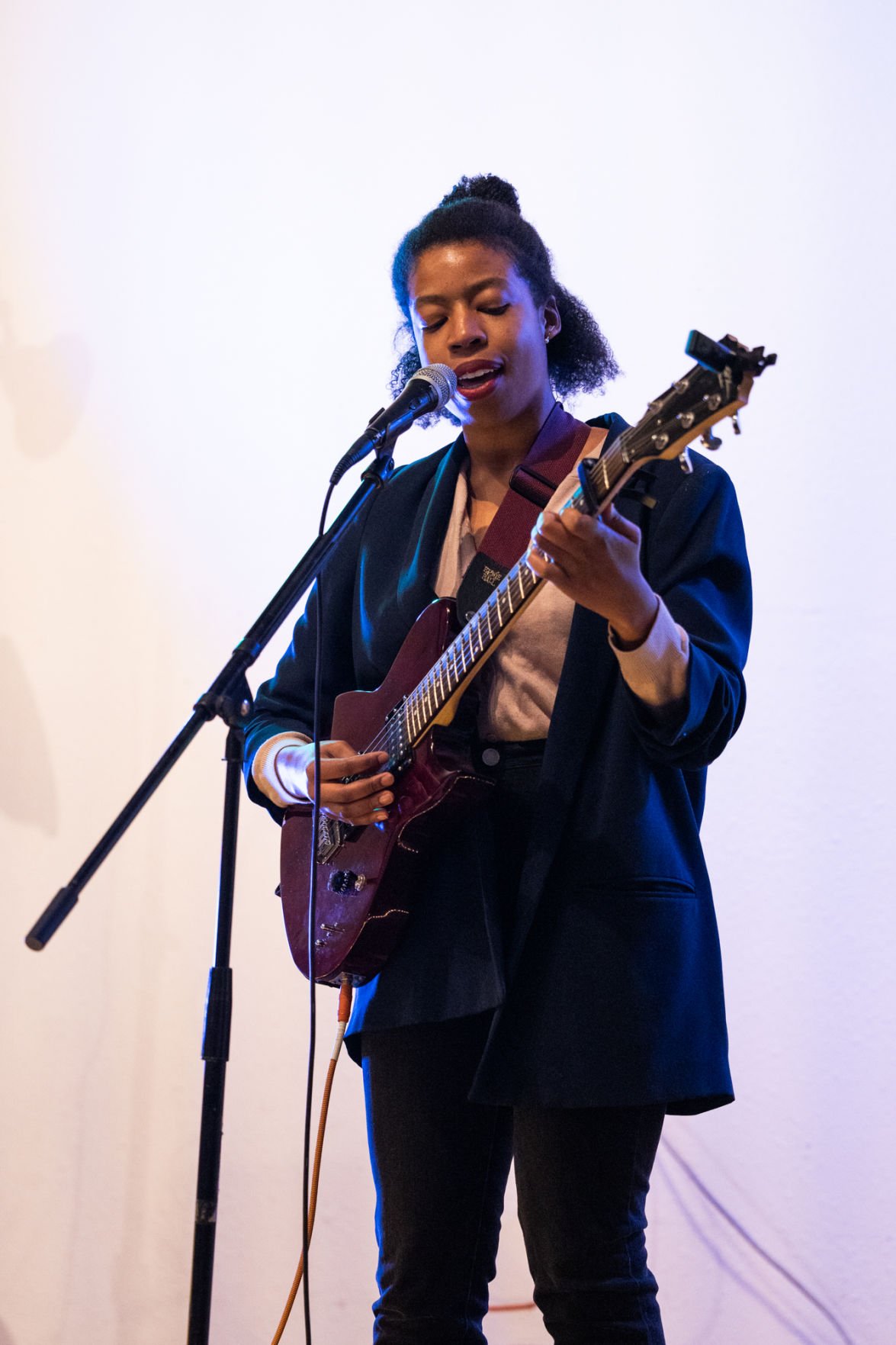 Heaven Johnson, aka Gal Gracious, performs a final song before Wizard Apprentice takes the stage at the Museum of Contemporary Art Flagstaff, Feb. 26. 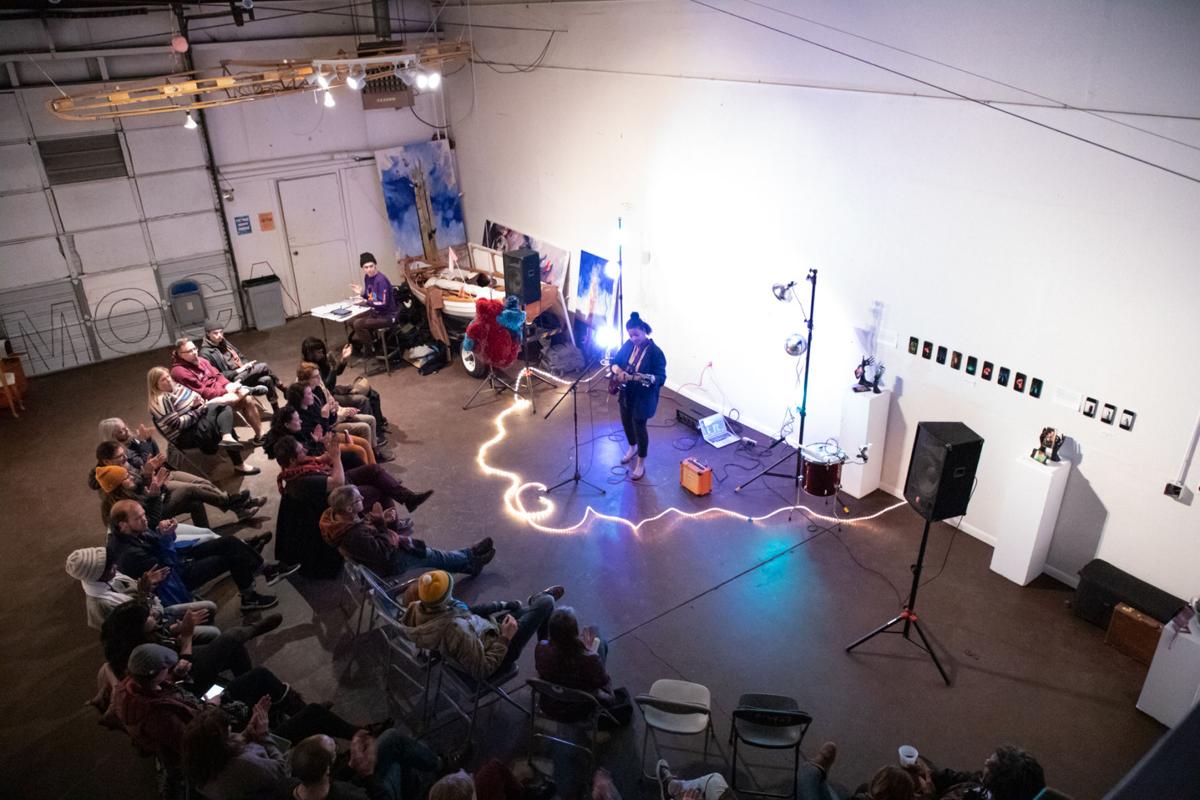 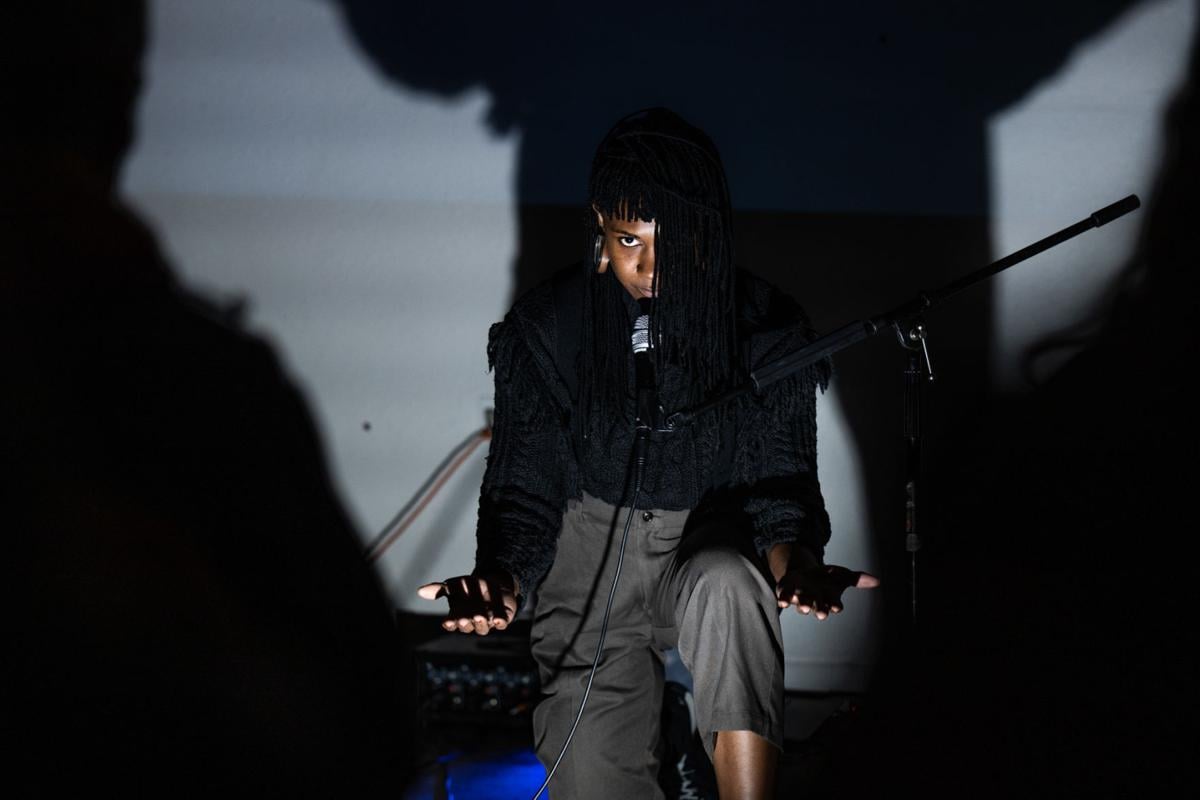 Tieraney Carter, aka Wizard Apprentice, opens with a captivating performance at the Museum of Contemporary Art Flagstaff, Feb. 26.

Heaven Johnson, aka Gal Gracious, performs a final song before Wizard Apprentice takes the stage at the Museum of Contemporary Art Flagstaff, Feb. 26.

Tieraney Carter, aka Wizard Apprentice, opens with a captivating performance at the Museum of Contemporary Art Flagstaff, Feb. 26.

Down a dark alley and through the doors to a warehouse packed with canvases and a rowboat, one can find original artists performing and showcasing their work at the Museum of Contemporary Art Flagstaff (MOCAF). The Interference Series opened with Gal Gracious and introduced Wizard Apprentice to a Flagstaff audience enchanted by their music.

On Feb. 27, The Interference Series, a nonprofit organization dedicated to supporting local original artists and musicians, presented at MOCAF for the first time. There was an intimate crowd set up right in front of the performers.

Founder and curator Owen Davis started The Interference Series in 2015. He serves as one of three people who organize the events and run the organization. Davis is a music teacher at Cromer Elementary School by day and an underground music host by night. He said that the series presents three to four performances a month in various Flagstaff locations between August and May, and this is its fifth season.

“It is an organization that is devoted to presenting artists that make work that is experimental, avant-garde, improvised or anything that really doesn’t fit in the cracks of mainstream performance,” Davis said.

Heaven Johnson, known by her pseudonym Gal Gracious, was the opening act for Wizard Apprentice and was sought out by The Interference Series after performing at the 18th annual Flagstaff Mountain Film Festival, which took place Feb. 13. Johnson’s soft style, soulful songs and infectious laugh created a tranquil feeling in the room. Johnson said she has been playing music all her life but did not perform much until she was offered the chance to drum in her friend’s band five years ago.

“I did it and it was the most euphoric experience ever, and I was kind of captivated by being on stage,” Johnson said. “Never have I felt so comfortable with myself, which is kind of a rare feeling when you feel completely in sync with your own self. I went to another world up there.”

Johnson said she has been playing at Hops on Birch, Firecreek Coffee Company and other locations around town, and that she does it because it is what she is meant to be doing.

Johnson said her music is different because she does not like to adhere to traditional music rules, like chord progressions. She said Flagstaff is similar to an artist’s bubble and that artists can grow here.

Tieraney Carter, whose stage name is Wizard Apprentice, performed the second show of her first solo tour at MOCAF and brought her eccentric, captivating voice. Carter’s performance was completely out of the norm. She used a spotlight, which she moved to cast different shadows on the wall behind her. She had created characters that had her face but with large or blacked-out eyes that were projected behind her, talking to the audience and introducing her songs. At points, she drummed while singing or expressed ideas through motion.

Carter described her music as digital folk art. She said she considers folk art to be music made by and for the community. She said art is often traditional and passed down from person to person in smaller communities or families, and basically digital folk would be a version of that, which involves technology such as cellphones, laptops or music sharing apps. Carter said her performances helped her to clarify her story and experiences.

“A lot of this live show is set up this way because I am a really nervous performer, so having an avatar be the host of the show frees up a role for me,” Carter said. “Since the avatar is doing it, I don’t have to and I can focus on being present and honest about my emotions as they come up. The other avatar in the performance is there to kind of represent a voice that I’ve internalized and that’s not mine, so I’ve needed those characters to help tell the story.”

Davis said that Wizard Apprentice falls in the cracks of different genres and even the phrase digital folk artist makes the imagination start flowing.

“She’s an artist who identifies very much in the do-it-yourself culture and the underground culture, and there’s a lot of that stuff out there and not too much of it in Flagstaff going on,” Davis said. “The more we can present artists like Wizard Apprentice, the more we can expose our community to more artists like them and learn more about ourselves as local artists.”

The Interference Series brings a whole new community together and brings artists, like Gal Gracious, who has her own unique style and songs that make one smile, and Wizard Apprentice, who challenges modern music. The organization is attempting to bring underground music out of the depths of Flagstaff.