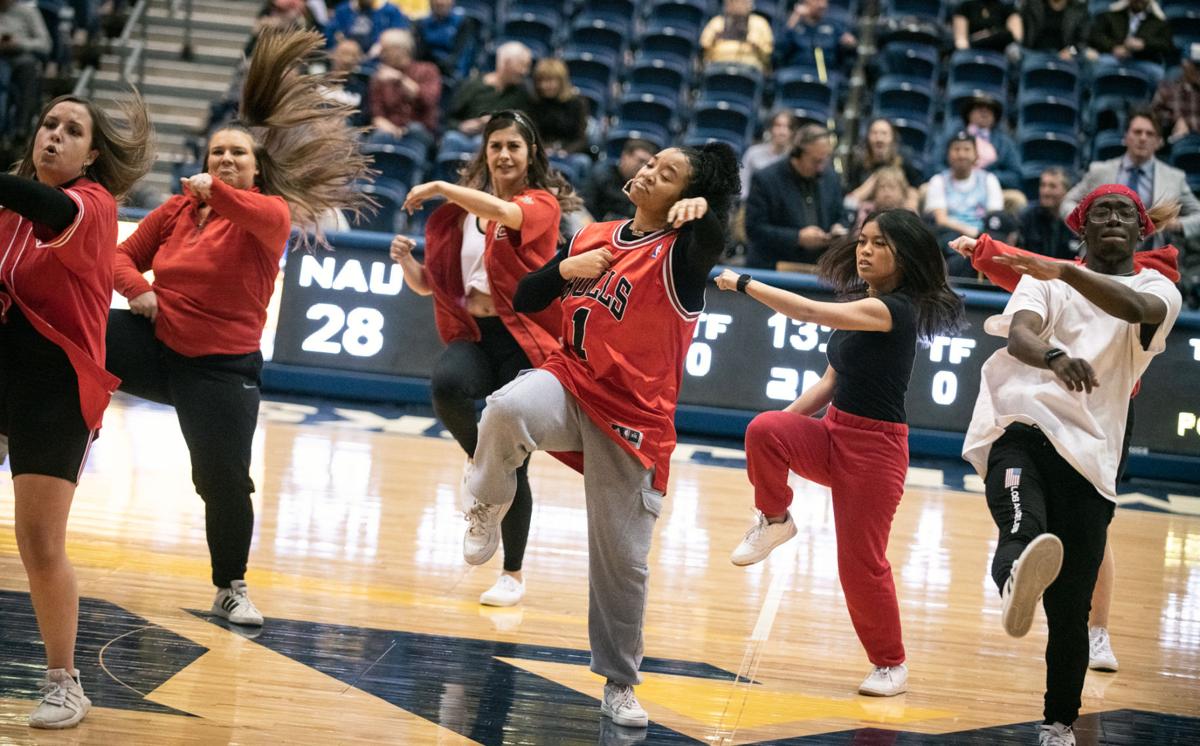 Unity Dance Crew performs at the halftime of an NAU men's nasketball game at the Walkup Skydome, Feb. 13. 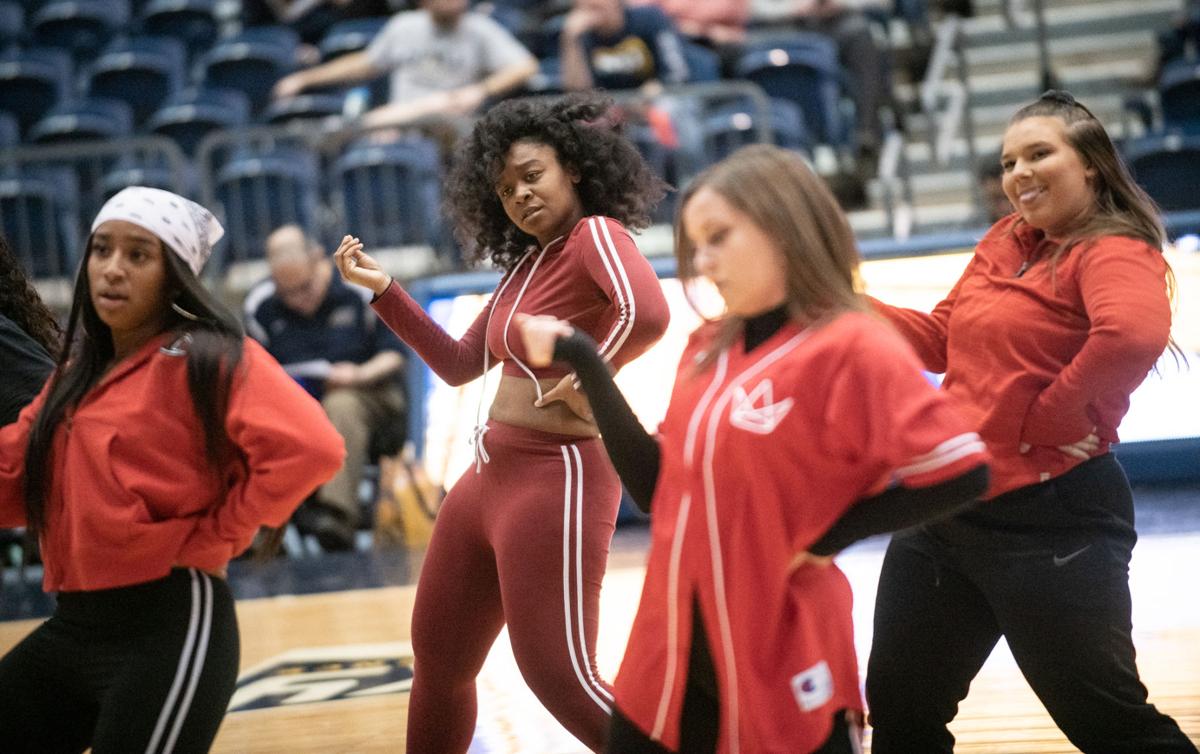 Unity Dance Crew performs at the halftime of an NAU men's basketball game at the Walkup Skydome, Feb. 13.

Unity Dance Crew performs at the halftime of an NAU men's nasketball game at the Walkup Skydome, Feb. 13.

Unity Dance Crew performs at the halftime of an NAU men's basketball game at the Walkup Skydome, Feb. 13.

Being in college and finding a group or activity to stay positive and upbeat can be difficult. However, the members of the Unity Dance Crew have found one another and developed a community around their shared interest in dance.

Unity is an NAU club that is focused on hip-hop collaboration. As club members explained, the name “Unity” comes from their desire to bring people together, regardless of anyone’s background.

Unity started when the club’s founders wanted more of an involvement in Hip Hop Week, which is a week dedicated to celebrating the genre. In 2017, two women, former students Diedre Magaña and Jasmine Coro, asked a few people from one of their hip-hop classes if they would be interested in forming a dance group. After the group was founded, Unity became an official club in fall 2018.

One dancer, senior Jade Hicks, said the team is like her second family. She explained that this year, the dance team is a larger group and she can count on any of the members for support. For Hicks, being on the team is a constant uplift in life and brings her a feeling of security.

“Being on a dance team is unreal,” Hicks said. “It’s like having another whole family who holds you accountable, who not only supports you dance-wise but academically, physically, mentally and personally.”

Freshman Mariah Ruiz is new to the group. She said trying out for the team was intimidating, but ultimately, she doesn’t regret becoming a member of Unity. She said being on the team has made her freshman year so memorable.

Ruiz has been dancing since she was 3-years-old and even though she does not plan on continuing dance for her career, she still wants dance to be a big part of her life. After joining Unity, she had the opportunity to choreograph a dance, which she described as an accomplishment, especially for a freshman.

“The thing about Unity is everything is very open,” Ruiz said. “It doesn’t matter what grade you’re in, age or anything. They allow you to be creative and choreograph.”

Senior Danae Edwards also had the chance to choreograph a routine. She has been in Unity since the beginning and is now teaching hip-hop classes at the Health and Learning Center. Edwards said she is choreographing all the time because of these hip-hop classes but makes sure that dancers on the team also get the opportunity to choreograph if they want.

“I would say I’ve done a pretty heavy amount of choreographing, but I love it,” Edwards said. “We try and get everybody on the team who wants to choreograph and give them a spot. That way, everybody gets a chance to showcase their abilities.”

Unity recently began performing at halftime of NAU men’s basketball games. Edwards said performing at games can be difficult because most of the time, people are not there to watch the dancers. She said it isn’t a bad experience though, because they are still out there performing and the attendees see who they are.

The dance group also performs at the Genetic Showcase, a high school dance showcase in Sahuarita, Arizona, each year. Ruiz said Unity was the only college team at the Sahuarita showcase this year because it typically features high school and elementary school dance teams.

There is also a Hip Hop Festival & Show in Yuma, Arizona, that the group attends. There are high profile choreographers who meet with students and teach them about dance.

“The event as a whole is a huge dance community who shares the same love, passion and dedication,” Hicks said. “The energy at the event leaves with you and you can feel it for at least a week later. At this event particularly in Yuma, there’s also a showcase where the big choreographers get to perform a bunch of their pieces, which are extremely inspiring to see in person rather than through social media.”

The Genetic showcase and the Hip Hop Festival & Show are places for the team to gain experience. Another opportunity for the team to perform is Hip Hop Week, a university-wide event that brings more exposure to the team.

Ruiz said Hip Hop Week is a big deal for the club. Members participate in events put on by ethnic studies classes, like Dance Day, and put in extra time and effort for preparation. Ruiz said Unity will go from practicing two days a week to almost every day before Hip Hop Week. This year, Hip Hop Week will be held the week of April 13.

With all the hard work put into choreographing and performing, Ruiz said that while dance is a sport, it is also an art.

“Dance is definitely an art,” Ruiz said. “There are so many styles whether it be ballet, modern, hip-hop [or] jazz. Everyone gets to express themselves however they want to [and] there are multiple dancers who create their own style. It doesn’t even have to be something that anyone heard of — it could be a mash of everything that they like.”

Edwards said dance is becoming more popular because of its artistry. She explained how dance can get emotional and that it is a form of expression, and that is what makes it artistic.

“I think dance is a very important art form,” Edwards said. “I think it’s really cool to see how shows and things like that come together, especially like ‘The Nutcracker.’”

Unity dancers explained they have found their passion, as well as a group of supporters who make being in college a little easier. The dancers all agreed that being on the team is inspiring and has pushed them past their limits. Being a part of the dance family, to these dancers, is what Unity is all about.