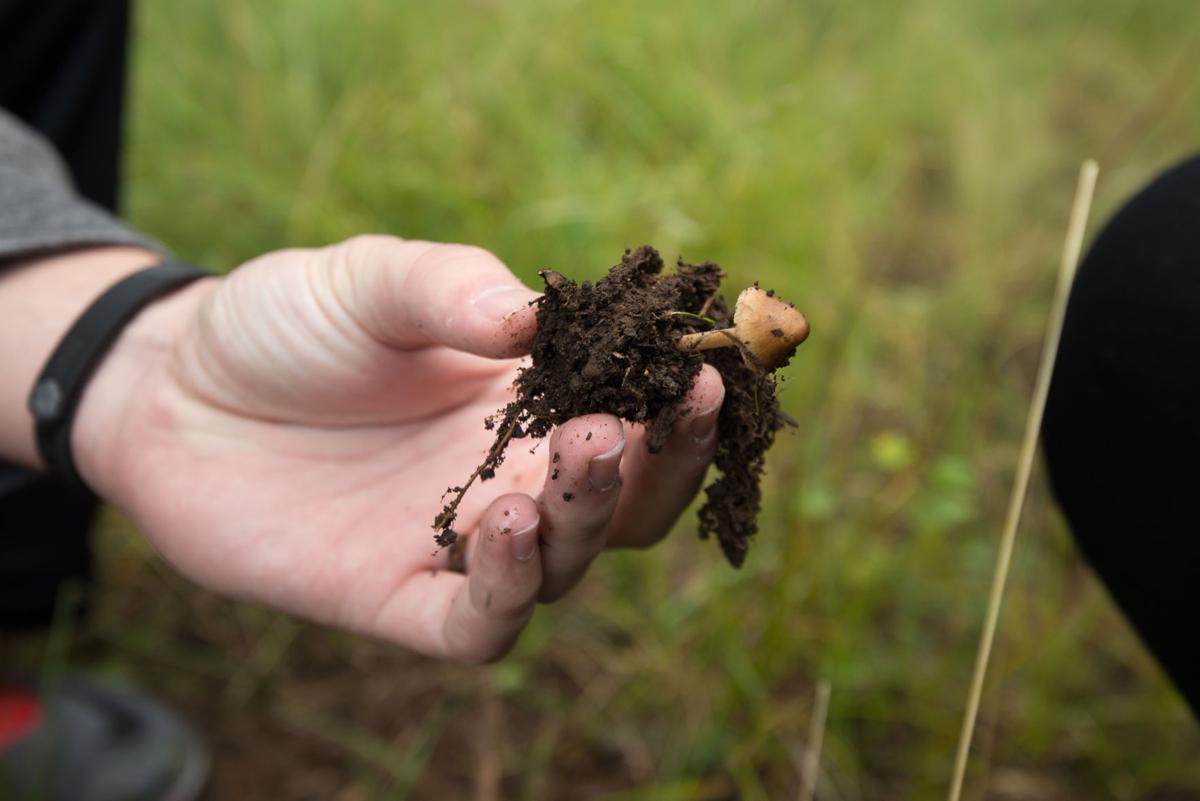 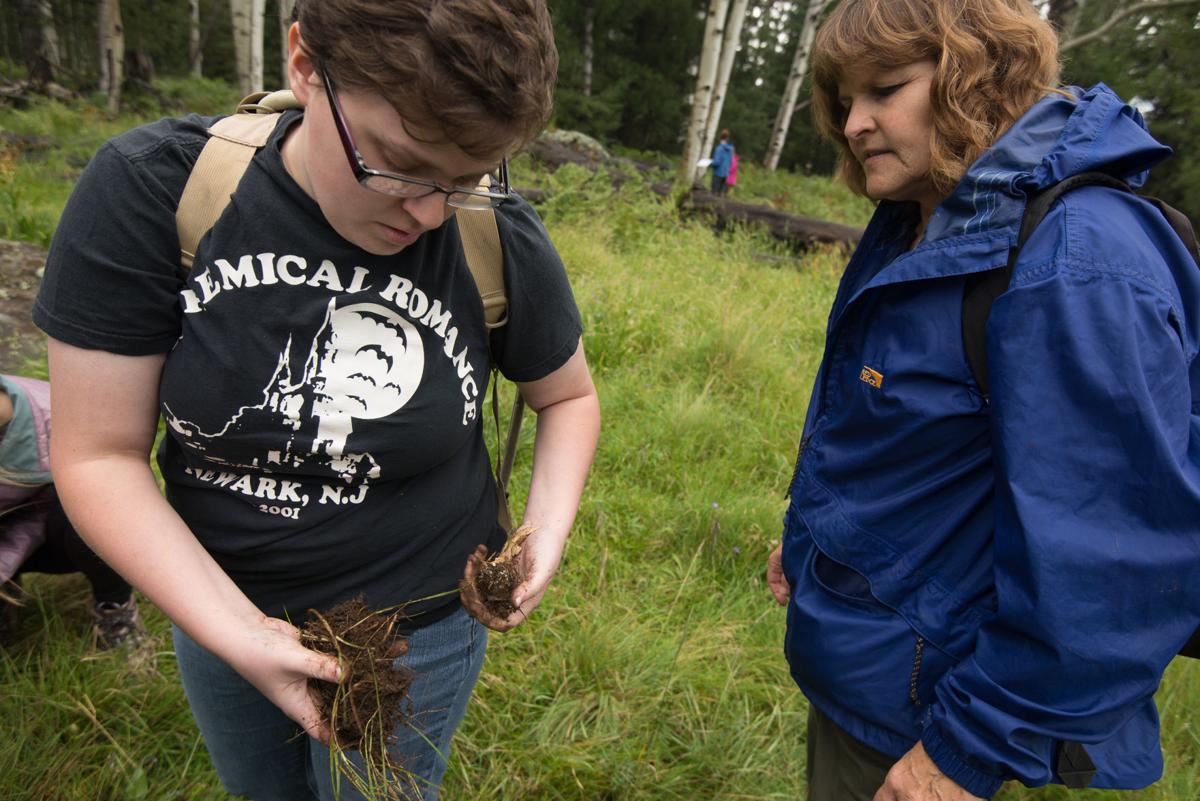 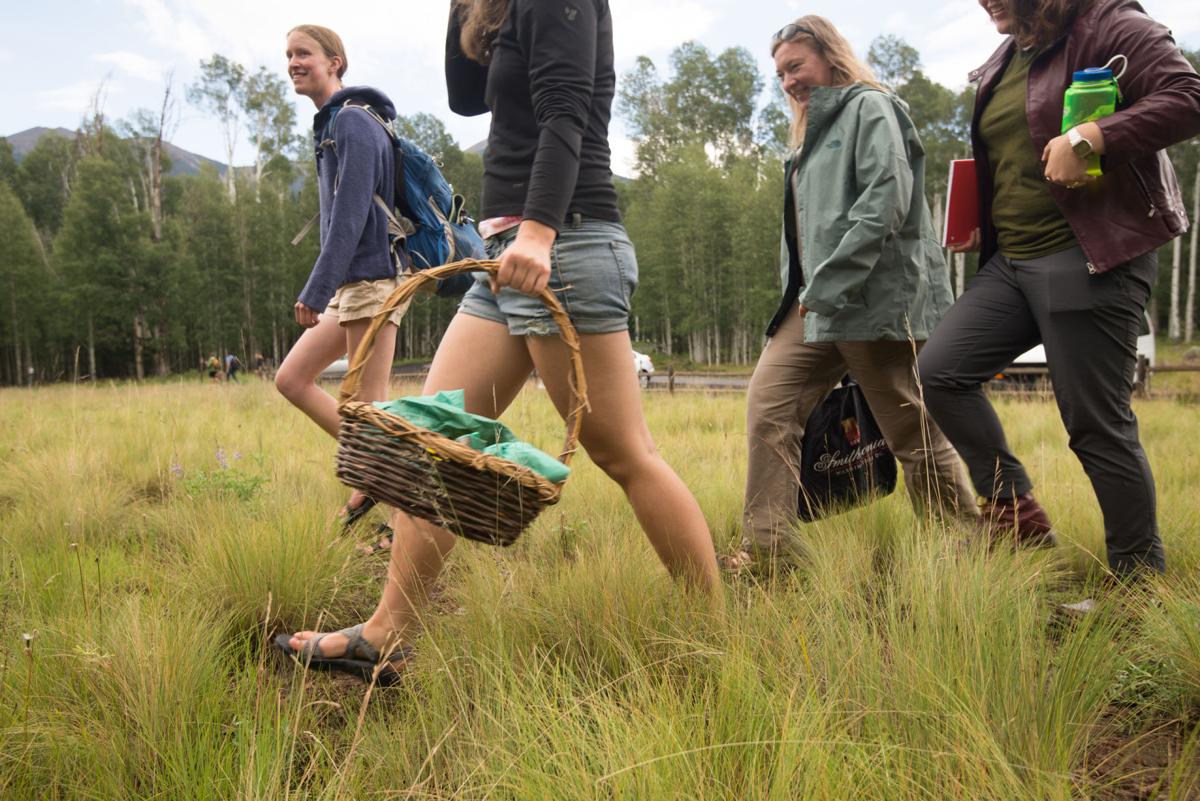 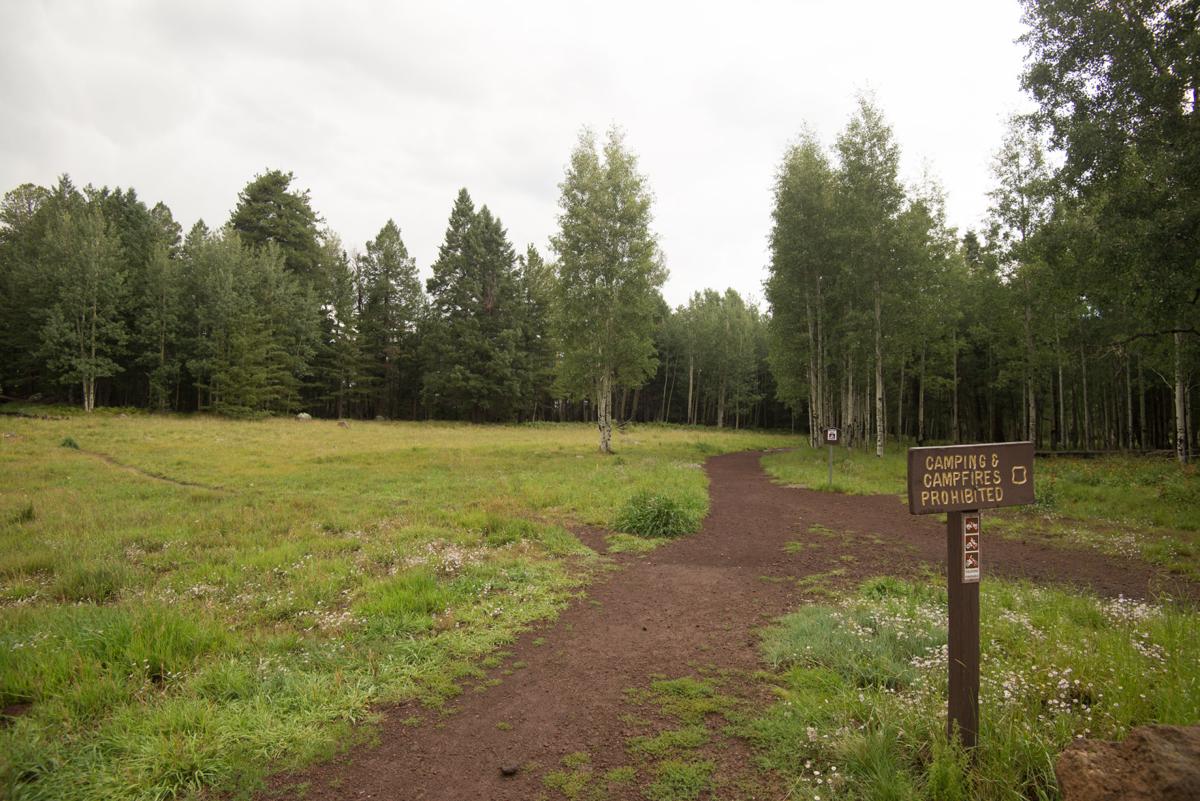 Toward the end of monsoon season in August, professor Catherine Gehring takes her mycology students to Aspen Corner for hands-on learning Aug. 28.

Crackling from the stovetop in a pan of melted butter, is a cluster of morel mushrooms. From first taste, garlic dances upon the tongue, and the morels fall apart in one’s mouth. What makes the mushrooms taste more delicious is that they were collected from the Coconino National Forest. They are the first of many mushrooms that can be found during spring and summer.

The gathering of wild food sources such as fungi is an alternative approach to food gathering known as foraging. When foraging for mushrooms in the forest, the odds may not always be in one’s favor. A person can either leave empty handed or walk away with bags full of mushrooms. However, what can make the hunt rewarding is the end result: cooking mushrooms into a delicious dinner.

Arizona is an expansive desert region, and the low-lying areas of the state are unfavorable conditions for growing mushrooms. Northern Arizona is contrary to an arid environment. The region is predominantly wet, heavily forested and is a promising region for mushroom foraging.

“People don’t realize it. They think of [Arizona] as a desert, but we have at least 300 species of mushrooms that grow here and probably 25 of them are good edibles,” said Christopher May, president of the Arizona Mushroom Society.

The Arizona Mushroom Society is a non-profit corporation located in Phoenix that was formed in the fall of 2015. The society offers experiential opportunities for the community to learn about the various uses of mushroom species in Arizona.

Starting in spring and continuing into summer, the landscape of northern Arizona becomes lush with vegetation and various mushroom species. For foragers who are eager to begin the hunt, it is typical to start foraging early in the first season: spring.

“One type of mushroom people are really excited about [every] spring is the morel mushroom. They are well known to gourmet chefs and so forth,” May said. “We have found a few of those already down in the Verde Valley along the Verde River and a little higher up in the red rock country by Sedona … Someone found 40 of them the other day and those are really delicious edibles.”

Morels also have many health benefits. Typically, plant-based foods often lack vitamin D, but morels are one of the highest mushroom sources for it. According to the Healthy Eating website, eating a cup of raw morel mushrooms can provide approximately 22 percent of the recommended daily consumption of vitamin D.

Morel growing habits also rely on a number of factors, and they generally grow in the spring higher than 6,000 feet and in warmer regions that are primarily wet. Fire is also another element that contributes to the success of the morel growing season.

“Places where there has been a forest fire are often a good place to find [morels],” May said. “After a wet winter like we had, we are expecting a good season.”

Thus far, the spring has brought fruitful morel foraging for the Arizona Mushroom Society. However, it is during the summer monsoon season when peak mushroom foraging typically occurs throughout northern Arizona.

“The monsoon season is, by far, the most productive, and the monsoon rains typically start around the beginning of June. Fourth of July is sort of the classic date in northern Arizona for monsoons to come, but they can come earlier or later,” May said. “The monsoon season peaks in early to mid-August, and that’s probably the very best time to go out looking for mushrooms. Then the rains taper off as you get into mid-September and so does the mushroom growth. We try to do most of our forays typically late June all through August and early September.”

Another desirable native mushroom species to northern Arizona is king Boletes. Their meaty size, nutty flavor and health benefits are what make them desirable to fungophils: mushroom lovers.

“Sometimes when there is a really big fruiting of mushrooms like last summer in August in the Flagstaff area – it was a pretty wet August — they had a big flush of one called the Barrows Bolete ­— Boletus Barrowsii — and that’s the Barrows Bolete or the white porcini. That’s a super delicious porcini,” May said. “You could go out last summer and you could practically collect them with a wheel barrow it was so easy to find them and pick them.”

Barrows Bolete are a robust mushroom, and they are a source of dietary fiber protein, potassium, zinc and vitamin B. They are also low in saturated and unsaturated fat.

Favorable growing conditions for Boletes are in woodlands under conifer trees such as fir and pine. It can also be found growing around deciduous trees such as birches and oaks. Barrows Boletes have been spotted in sites such as the Mogollon Rim and Oak Creek Canyon in Sedona.

While Mushrooms are used for culinary reasons, they are also valued for their medicinal properties and are a facet of scientific studies like mycology.

Mycology is a methodology which studies the genetic and biochemical properties of fungi and how they are classified. The practice also studies the poisonous, infectious, edible and entheogenic properties in fungi which is the psychoactive properties that are used to induce spiritual experience.

The study of mycology is as a course at NAU, and it offers an explicit opportunity for students to develop introductory skills and knowledge in fungi.

As one becomes acquainted with the study and the food sourcing of mushrooms, an amateur may be enticed to delve further into the lifestyle by joining outdoor associations like the Arizona Mushroom Society.

“There are a certain number of people who are interested in medicinal species, and we have medicinal species [in Arizona]. We did a very successful medicinal mushroom foray last July on the Mogollon Rim and we found reishi mushrooms and Artist’s Conk, it’s called Ganoderma applanatum, and turkey tails and oyster mushrooms which some people consider to be medicinal,” May said. “The early season tends to be really good for those medicinals because a lot of them grow on wood, and they fruit very early in the monsoon season.”

According to the Dr. Axe Food is Medicine website, “Over the past several decades, dozens of different studies conducted in Japan, China, the U.S. and the U.K. have demonstrated that reishi mushrooms are capable of offering protection against numerous diseases or illnesses.”

Mycology is one scientific field that can be inclusive to foragers and mycologists at all levels. May notes that people can contribute to mycology by collecting mushroom samples in the wild and sending them to labs for study.

“There are not many fields of science where amateurs can make a big contribution. Mycology is one of them. We have a scientific committee in our club and they are actually pretty active ... The scientific committee consist of eight or 10 people who are really interested in that stuff and I’m among them. I have a microscope, and I love to look at the spores prints,” May said. “They will also collect specimens and will send them to the [Robert L. Gilbertson Mycological Herbarium] down at U of A, and we will sometimes send them to other scientists. I have sent them to California and to New Jersey to scientists that are studying different things.”

Mycology and mushroom foraging can be exhilarating and rewarding. However, it is imperative to adopt a set of foraging ethics. Daniel Revillini, a graduate student from the biological sciences department at NAU encourages people to learn how to correctly identify edible species to avoid interaction with poisonous mushrooms.

“There is always look-a-likes, but one of the easiest things to do when you start mushroom foraging is identifying the poisonous ones, know exactly what they look like, and then you know what isn’t poisonous,” said Revillini. “Some people really like the foraging aspect in general and want to try anything that’s edible, so, that’s when you get into more dangerous territory. But most of the time here it’s pretty easy.”

Knowledge can be power, and when mushroom foraging, knowledge can be what keeps one from becoming ill ­— or worse. At elevations 3500 feet and above, mushrooms can become more toxic and can have a severe effects on the body causing liver, kidney damage or organ failure. Fungi from the genus Amanita are noted to be one of the more life-threatening fungi that grow in northern Arizona. The Destroying Angel is one species in the genus Amanita, according to the Arizona Poison and Drug Information Center.

Those who practice mycology and mushroom foraging may also take spore prints of mushrooms to identify the species and genius. Spore prints can be crucial to the identification process.

To take a spore print, one presses the cap or surface of a mushroom on to a flat sheet of paper. Mushrooms generally produce a powdery deposit and will release their print onto the paper during this process.

“[Spore prints] are super simple. Sometimes you would do it if you find a mushroom in somebody’s lawn you could easily do a spore print and tell if it’s an Agaricus [mushroom genus]. You can tell the genus pretty quickly with spores prints,” Revillini said. “You would look at gills, under the cap, and look at those.”

Also, the color of a spore print, the number of spores that come out of a mushroom and how quickly they drop onto paper are what people will compare to other descriptions of mushrooms in guides or keys.

According to the Mushroom Expert website, relatively mature mushrooms should be used to make spore prints. Young mushrooms and mushrooms that have partial coverings over their gills or pores may not be able to drop the spores needed to make a print.

Security procedures are just as vital to one’s safety as mushroom identification. It is important people are aware of their surroundings and the conditions of foraging sites.

“Sometimes you get tunnel vision and you zone out and then you’re like, ‘Oh, I don’t know where I am.’ Another thing is, especially for morel hunting, it’s the really windy season in Flagstaff, and you’re in a burn area typically looking for morels. So, most of the time you’re looking at the ground but sometimes you need to be aware to the branches and dead wood above you,” Revellini said. “It can be really dangerous out there sometimes. I have been pretty close to trees falling and massive ponderosas branches snapping off in high winds. You do really have to be aware of your surroundings.”

Mycology and mushroom foraging are not confined to experts. They are inclusive fields that allow for experimental learning and independent food sourcing. Whether one is cooking morels into stir fry or cultivating reishi mushrooms into herbal medicines, foraging puts control in the hands of the individual.