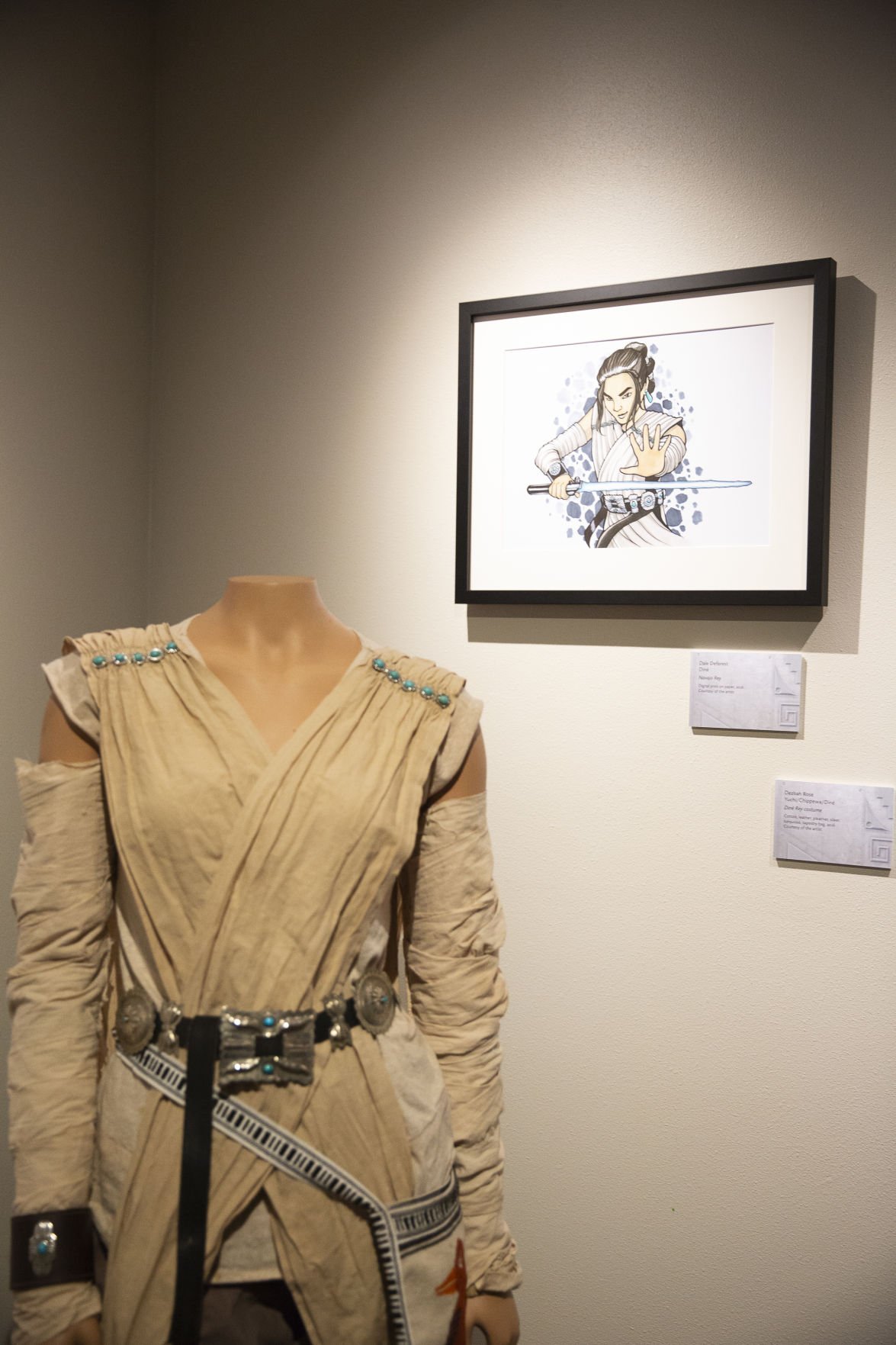 An outfit created by Dezbah Rose and a print by Dale Deforest are both interpretations of Rey from “Star Wars” that incorporate indigenous cultures Oct. 5. 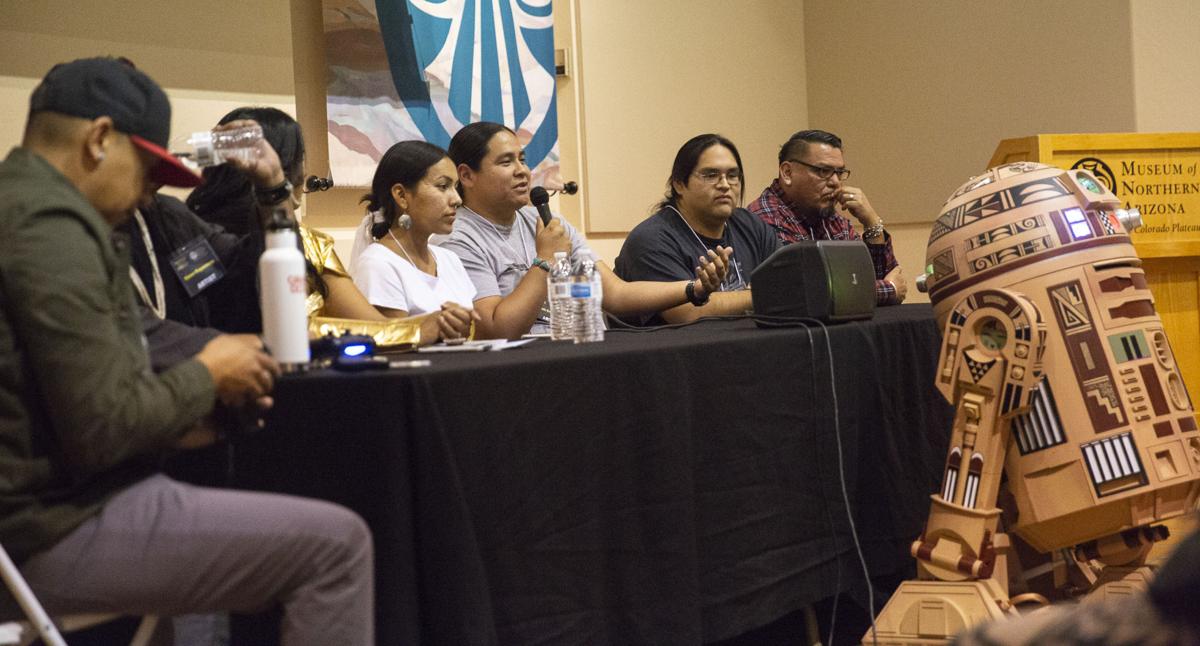 Artists discuss their pieces at a panel for The Force is with Our People gallery Oct. 5. 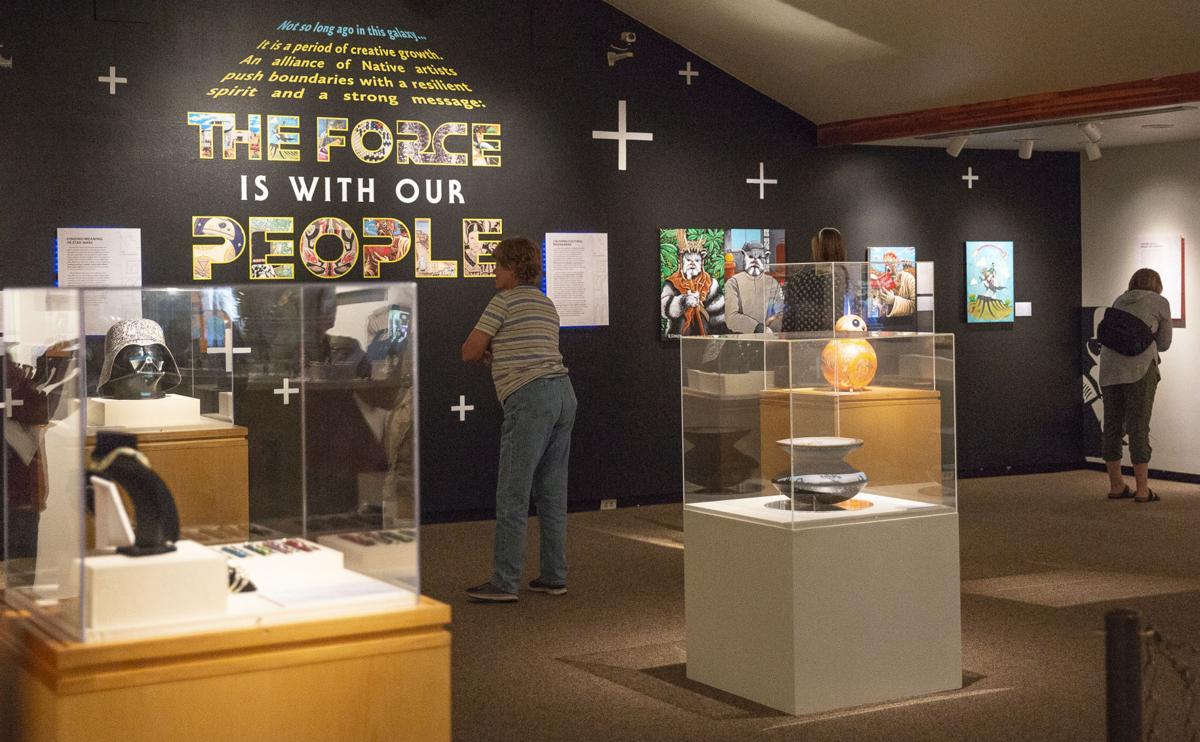 People visit The Force is with Our People gallery Oct. 5.

An outfit created by Dezbah Rose and a print by Dale Deforest are both interpretations of Rey from “Star Wars” that incorporate indigenous cultures Oct. 5.

Artists discuss their pieces at a panel for The Force is with Our People gallery Oct. 5.

People visit The Force is with Our People gallery Oct. 5.

A short time ago in a galaxy not so far away was a period of teaching and collaboration. Native American artists from across the Colorado Plateau have come together in unison to showcase their work, each one unique in telling their passions, and all sharing one common theme.

The Force is with Our People is the name of a new exhibit at the Museum of Northern Arizona that runs through May 2020. It showcases Native American art with the common theme of George Lucas’ 42-year-old space epic, Star Wars, which concludes in December with “The Rise of Skywalker.” The exhibit is free for NAU students with their IDs.

The exhibit has a wide variety of art, ranging from a fully functioning R2-D2 astromech droid to paintings and cosplay. It houses art from 23 different artists, all from tribes across the Colorado Plateau, and is the brainchild of the museum’s anthropology collections manager and Star Wars fan, Anthony Thibodeau.

Thibodeau said he gained inspiration for the exhibit in 2016 after attending the first year of Indigenous Comic-Con, now rebranded as IndigiPop X.

“The first year was when I first started noticing that there are lots of pop culture influences that these artists are tapping in to, but Star Wars was more than anything else,” Thibodeau said. “That was also the first time I became aware of the translated film.”

In 2013 the Navajo Nation Museum, in partnership with LucasFilm Ltd., translated “Star Wars: A New Hope” into the Diné language. He also said IndigiPop X and the translated film served as the main inspirations behind the exhibit, and without them, the exhibit might not have happened.

The overarching theme of the exhibit is the balance between forces that is seen throughout the films. Most recently in “The Last Jedi,” Luke Skywalker teaches Rey the ways of the force on Ahch-To, similar to when Master Yoda taught him on Dagobah. Skywalker explains to Rey that the force is a balance, which binds everything in the universe together, before Rey realizes the same balance of the force is within her. Thibodeau said he wants viewers to realize, like Rey and other force users in the Star Wars universe, they too have to find that same balance in their everyday lives.

Thibodeau met a majority of the artists who are showcased in the exhibit at IndigiPop X and eventually discovered more artists through their work. He didn’t solicit any of the art on display in the exhibit, and he wanted to find work that existed before the idea of the exhibit was conceived.

His favorite pieces in the exhibit are a tie between the “Hopi R2” built by engineer Joe Mastroianni and the “(De)Colonized Ewok” painting by Diné artist Ryan Singer. He is most excited for guests to see all the artwork and the 10-minute documentary that goes into detail about the “Star Wars: A New Hope” translation project.

Thibodeau also wants visitors at the exhibit to grasp the underlying message that indigenous people are still here, are actively engaged with contemporary culture and influenced by popular culture, while still being strongly connected to their traditional roots.

R2-D2, the well-known blue and white astromech droid and long-time counterpart of C3-PO, made its debut in Flagstaff thanks to local engineer Joe Mastroianni. However, his isn’t the usual R2 seen in the films — this is a one-of-a-kind, movie-accurate R2 unit painted in the style of Pueblo pottery, thus inspiring the name “Hopi R2.”

Mastroianni tried contacting the Sacramento Astromech Builders club. He and his wife, the museum’s director of marketing, Kristan Hutchison, knew about the club from their time living in the San Francisco Bay Area. They wanted to see if they could bring an R2 unit to Flagstaff for the exhibit’s opening. However, when that wasn’t possible, Mastroianni said he decided to build one himself.

Building “Hopi R2” took him less than a year from when he decided to start in 2018, and it is the first droid he’s ever built. He said the hardest part of building “Hopi R2” was dealing with mechanical linkages and motor placements.

“The most challenging part of the build was getting the legs to fold up via motors so that R2 could stand straight up and so we could load him into a crate conveniently,” Mastroianni said.

In order to get it to work, Mastroianni had to add a linear drive motor, light switches and a motor controller. He bolted the legs in a way that still allowed them to move freely. The droid is controlled via remote control, as well as WiFi, and has a total of nine embedded processors inside. It also has a video display in its front holoprojector, which contains Princess Leia’s famous hologram from “Star Wars: A New Hope.”

Mastroianni said he’s honored to be a part of the exhibit, because this is the first artistic and Hopi project he’s ever been a part of. He said he wants visitors to understand traditional culture is combined with modern technology.

“Hopi R2” was painted by Hopi artist Duane Koyawena over a period of three weeks. Koyawena has been painting since he was a child, but he has never had any schooling involving the craft. He specializes mainly in Hopi art and tends to paint pieces he likes or grew up with.

Koyawena first got involved with painting “Hopi R2” after Mastroianni brought up the concept of building it. He said he didn’t believe Mastroianni would build it at first and thought it was unrealistic, until Mastroianni invited him over to his house one day.

“[Mastroianni] told me he had something to show me,” Koyawena said. “It was just the head of the R2 in a box. No panels were on it, no motors or wiring — it was just a skeleton. It was then that I knew he was serious about building it.”

Koyawena got the idea for painting R2 in a Hopi pottery design after seeing the head, because it resembled a pot. He researched photos to get an idea of the traditional pottery designs, and eventually the project took off. He was able to take some of the panels home to paint, but once he finished those, the real challenge began. The R2 unit was so heavy he couldn’t bring the entire piece home to paint.

Instead, Koyawena had to lie down in awkward positions on the floor of Mastroianni’s garage to get the job done. Koyawena said despite the long nights of painting, he was always thinking about the outcome of the project and the joy it would bring others once it was completed.

The walls within the exhibit were also painted by Koyawena. Lightsabers and a side-by-side mural of Darth Vader and Jedi Master Yoda add to the Star Wars theme. He said he wants visitors to realize there is a good side and a bad side for everyone in life, and it is the same within the Hopi culture.

Navajo artist Ryan Singer has multiple paintings within the exhibit. Singer has been an artist for 40 years and said he did not have to think about it when Thibodeau asked him if he wanted to be a part of the exhibit.

Singer said he’s been drawing Star Wars imagery since he was 7 or 8. He followed the saga religiously and remembers going to watch “Star Wars: A New Hope” in theaters when it came out in 1977.

When it came to deciding what pieces to include in the exhibit, Singer said a good collection from different years came together, and all the works complemented each other. He’s most excited for visitors to see one piece in particular.

“One of my favorite pieces today is still the “Tuba City Spaceport,” because I grew up in Tuba City,” Singer said. “My memories helped create this piece. I believe this was a turning point in my art career. I realized that the possibilities are endless.”

Singer draws inspiration for his art from everyday life, memories and childhood nostalgia. He gets inspiration from movies, music, photography and paintings. Besides painting with acrylics, his favorite pastime medium is drawing with a pen and ink.

Singer said he wants visitors to enjoy his art and take away what they want from it, whether it be a laugh or something more in-depth, such as an inherited view on social or historical issues. He said he also wants his art to inspire youth to go after their own interests.

Both Thibodeau and Mastroianni said Native American art and Star Wars relate because of the universal story George Lucas told.

“There’s such wide appeal to [Star Wars], but that appeal also includes appeal to Native people, because there are things in that narrative that are widely appealing that resonate with them,” Thibodeau said. “Those are universal stories, not just to native people and artists, but a lot of other ones really hit home for a lot of people. Also going back to the idea of balance between the light and the dark and living in balance — I think that is at the core of it as well.”

Singer said Star Wars and indigenous art relate to one another because, Star Wars is universal and can fit in with any culture. He related to it because of how the desert landscape of Tatooine in “Star Wars: A New Hope” looked like Tuba City where he grew up.

The Force is with Our People is an exhibit that not only strives to educate visitors on Native American art through the common lens of “Star Wars,” but also brings together artists who are influenced by the numerous themes within the films. So just as it flows through the Skywalker bloodline and each of the indigenous artists within the exhibit, “May the force be with you.”