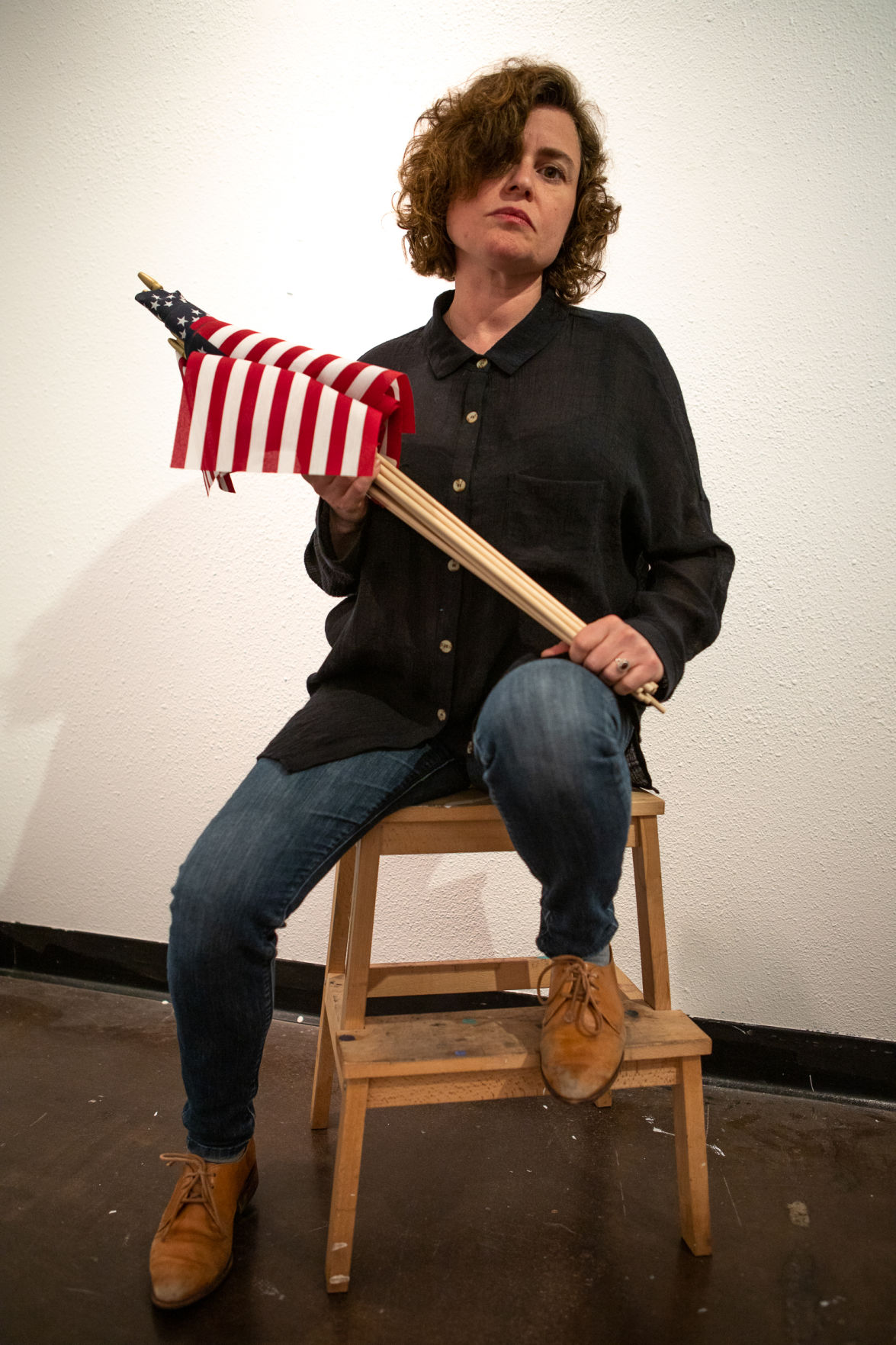 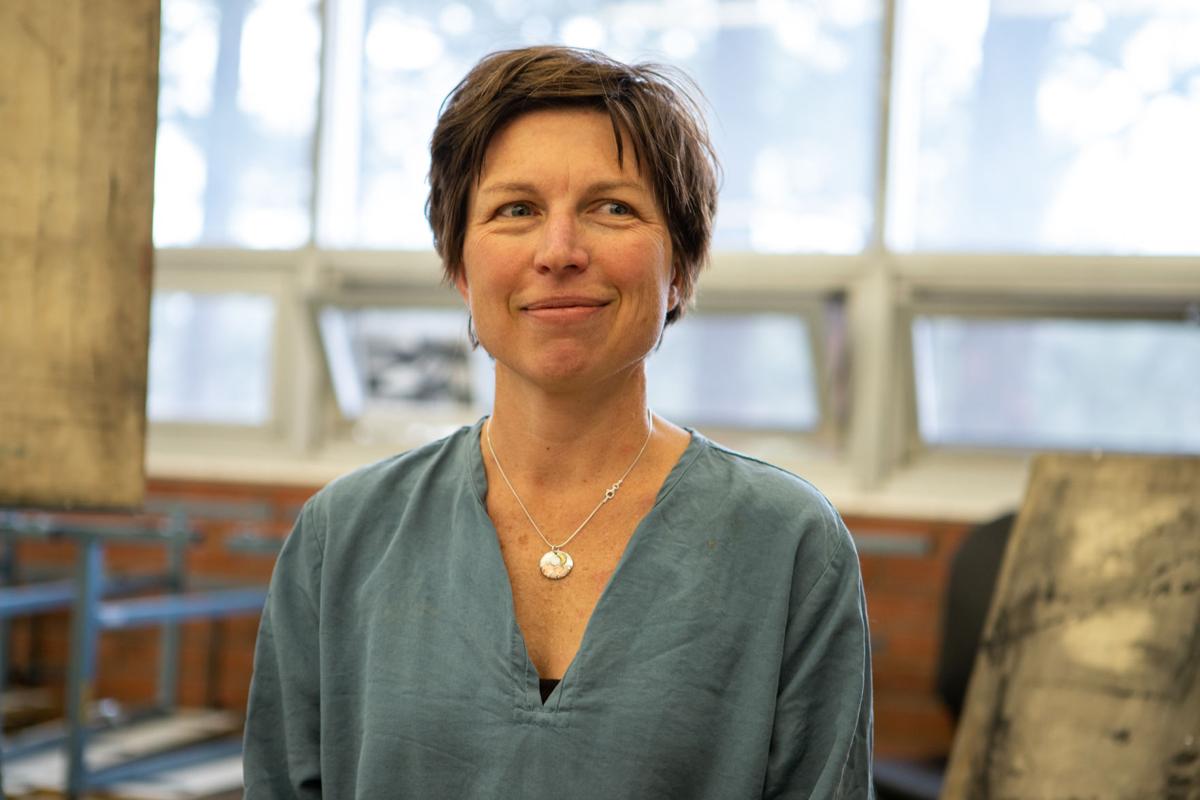 Foundations of Art coordinator Julie Comnick sits in one of the art studios where she teaches, March 11. 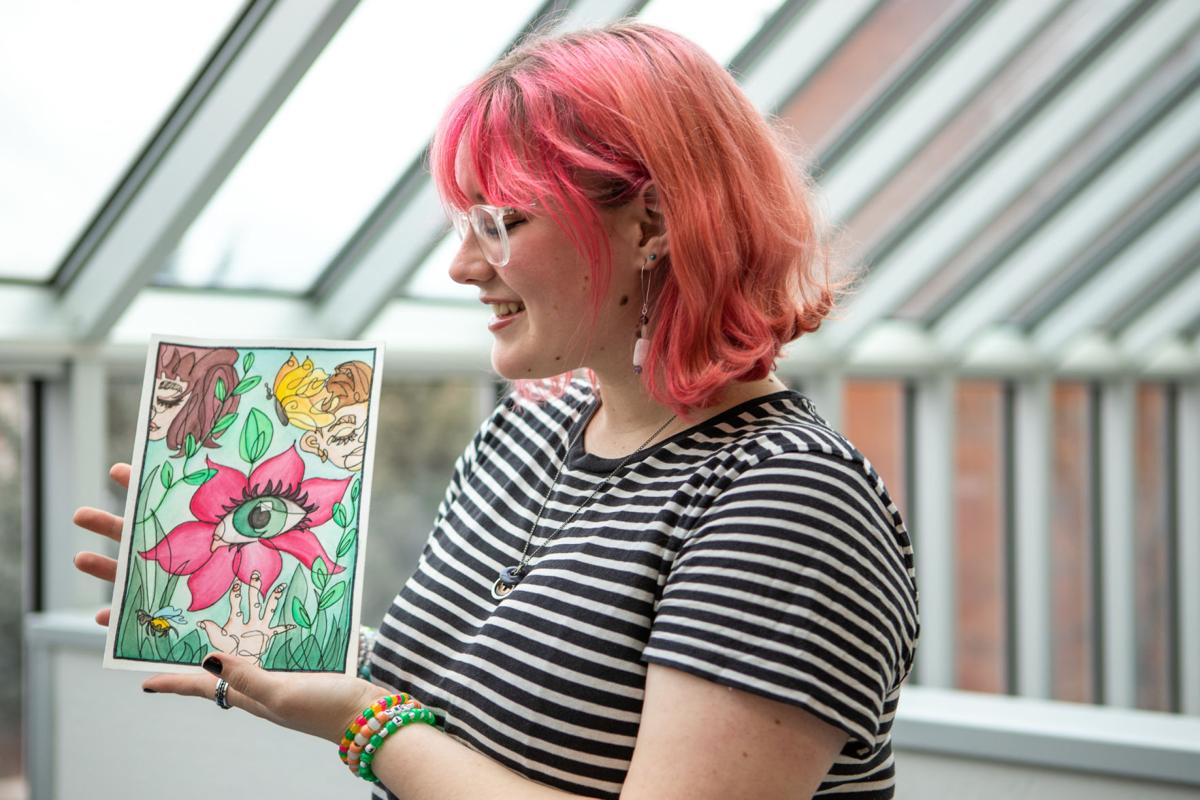 Freshman Hannah Rockwood holds up her artwork titled “Seen,” March 11. The piece was displayed in the NAU 2020 Salon Show.

Foundations of Art coordinator Julie Comnick sits in one of the art studios where she teaches, March 11.

Freshman Hannah Rockwood holds up her artwork titled “Seen,” March 11. The piece was displayed in the NAU 2020 Salon Show.

Art can take on many forms and whether it be painting, drawing, singing or performing, artists find a way to express themselves through their work. Whether they started in kindergarten or later on in life, NAU's female artists continue to pursue their passion.

Debra Edgerton, a senior lecturer for the school of art, said she remembers back to when her mother would do drawings for her and her sister. As the years went on, when Edgerton was in first grade, she began doing her own drawings and now teaches at NAU's School of Art. Being artistic growing up comes with having people as role models and influencers for the art.

“There are a lot of African American women artists who have influenced my thinking in art,” Edgerton said. “Kara Walker and Laylah Ali come to mind. My style isn't anything like theirs, but the way they contextualize their work is what I admire. They research the historic and cultural context of their work and they let pop culture and personal experience seep into their work.”

Another artist who began early and even won an award as early as the second grade for her art is freshman Hannah Rockwood. Even though she is a literature major, Rockwood still finds time for art and explained that she was always doodling and would get sketchbooks for Christmas, which helped her interest in art grow. Recently, Rockwood's art was featured in the NAU 2020 Salon show at the Beasley Gallery.

Rockwood said she has long been interested in the abstract impressionist style and drawn inspiration from it. She has even learned some of her skills from her favorite artists.

Senior lecturer Nicole Langille-Jelsing takes on a different form of art: singing. She began her artistic career in high school when she would do set designs for the theater program. She went to college starting out with studying art and then changed her major to sculpture. After graduating and realizing she felt as though she did not learn enough from the program, Langille-Jelsing said she decided to work at museums in New York. She now has a graduate degree in painting from Ohio State University but enjoys performing the most.

“I knew [performing] is where I want to go, instead of me just performing in front of the camera by myself, I’m with other people,” Langille-Jelsing said. “I think it’s very interesting when you can gather positive energy and positive ideas from people. I like the idea of bringing people into it.”

Langille-Jelsing explained that, now, as a teacher, she wants to make sure her female students know they are in charge. Rockwood said there are a lot of females in the art world and they all should stand together in solidarity.

Julie Comnick is another lecturer in the school of art. She said her artwork reflects herself as an artist. Her values are also reflected through her art and even though she does consider herself a feminist, her art does not take on feminism as a topic.

Comnick described how when museums do women artists only galleries, they are setting an assumption that it is a women’s job to bring up the topic of women being excluded in history.

Along the same lines, Edgerton explained artwork dating back to cave paintings have had a visual voice and can use their vision to possibly affect perception and promote change. She said artists have visuals in common, even when they don’t have language in common.

“All voices are important,” Edgerton said. “Women bring different concerns and topics to the table. So, in order to elicit reactions of compassion and empathy and provide perspectives outside the dominant group, we need to be part of the conversation."

Sometimes art can be used for political themes and as a form of activism. Rockwood explained how even though she strays away from using her art for political manners because she is a beginner, she knows that some artists do use their art for activism like mental health issues.

Comnick also described how her art can be about social concerns. She has taught art in activism classes and said that visual art is a strong way of reaching out to people to express concerns.

Langille-Jelsing said she believes in using art for activism and political or social concerns. Before the last election, she focused her art on what it meant to be a human, less about the political spectrum and more about people. Specifically, sensitivity, kindness and caring for someone. After the 2016 election, she said that everything became political and she tries to use her art as an avenue for demonstration.

“In my work, I feel like I am trying to touch something that maybe starts as a political symbol, but ends as something much deeper, ends in something different,” Langille-Jelsing said.

Focusing on the future can be important for artists, especially in college. Rockwood does not currently have a minor in art but is trying to implement one in order to continue creating.

“I'd like to establish an art minor and then go into that,” Rockwood said. “Also look into possibly some internships for a while because I am a literature major. I was thinking about going into the author-illustrator field, but I'm not really sure for now, it's open-ended but just improvement is where I’m headed.”

While some focus on what they will do with their art career, Comnick puts her focus on her current projects. Currently, she is working on a project that explores the relationship between the increasing use of technology and diminishing evidence of cultural heritage. Her piece is called “Arrangement for a Silent Orchestra” and she uses the imagery of a burning pile of violins to get her message across. She has currently been working on the piece for eight years and is moving into the next phase of it.

“I'm interested in what we have to lose if we lose traditional practices in light of new technology and how to find a balance,” Comnick said. “So that project is the first project that's been really a focused exploration of a single theme. Prior to that, I was doing individual paintings as sort of an umbrella theme, but each painting would have a specific topic and theme to explore in and of itself.”

Being a female in the art world can bring solidarity as well as a form of activism for these artists. These women have followed their passion for art and continue to create as a way to express themselves and the issues they value. As Edgerton said, women must not be afraid to use their voices and be committed to what they want to say as an artist.

Education is changing in FUSD this fall