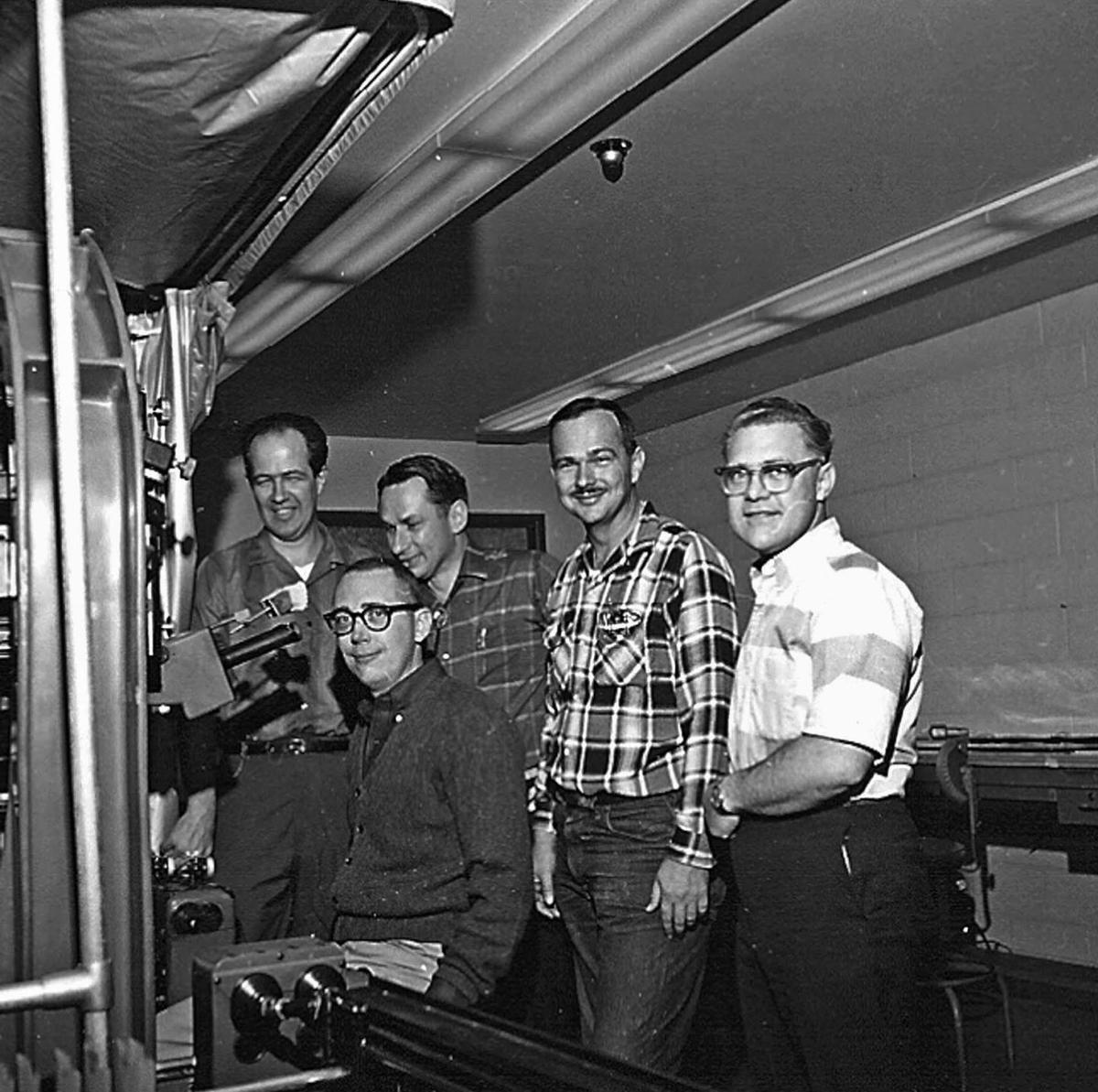 Astrogeologist Ray Jordan (seated) working with other surveyors in Flagstaff, 1968. 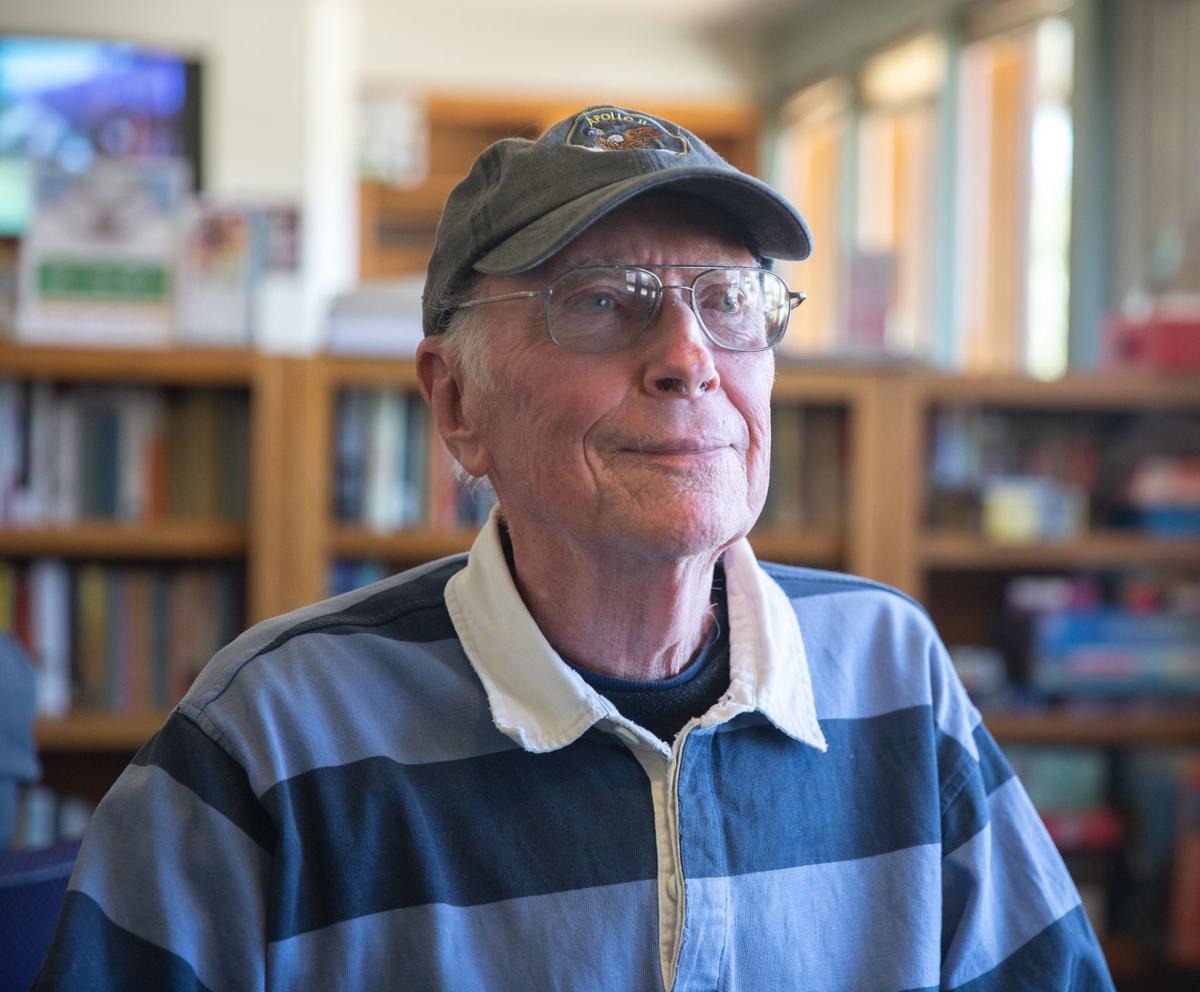 Ray Jordan, a former lunar mapper and astrogeologist, poses for a photo at the Joe C. Montoya Senior and Community Center March 5, 2020. Wearing his Apollo 11 hat, Jordan said he felt privileged to be a part of the wonder and excitement during space exploration in the 60s and 70s. 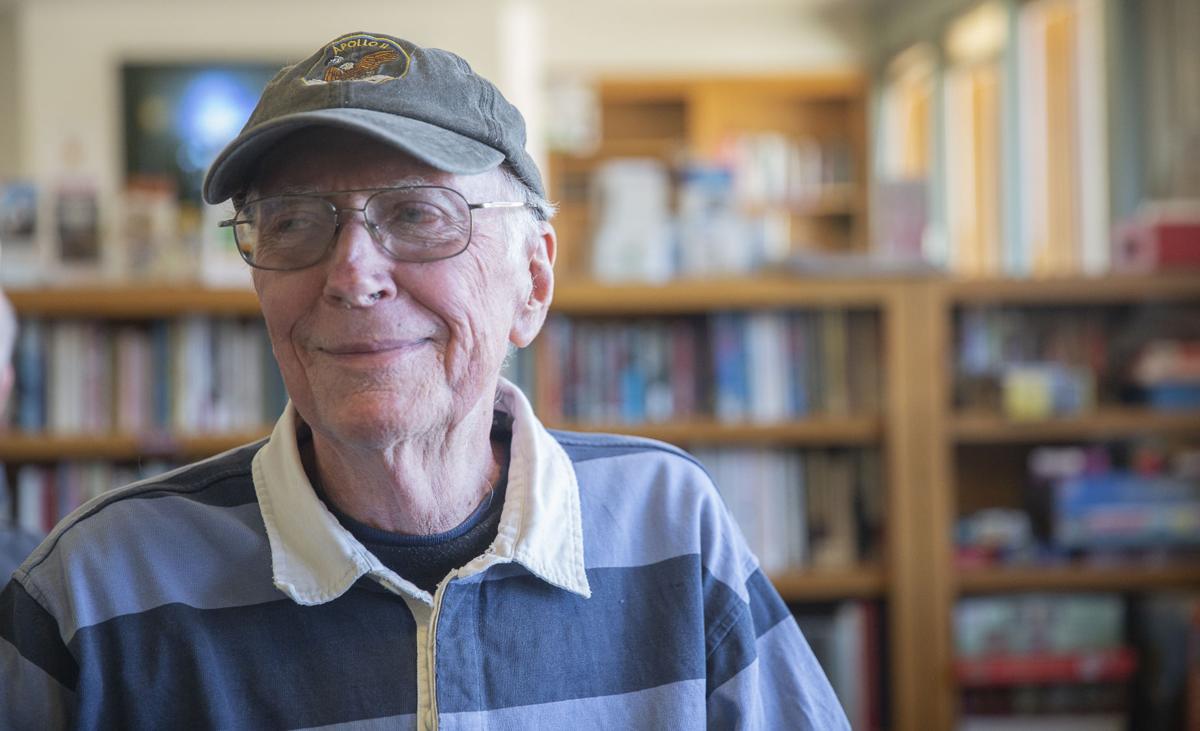 Ray Jordan gives his friend a grin while sitting down for a photo at the Joe C. Montoya Senior and Community Center, March 5. Jordan, after a 27-year career in lunar mapping and astrogeology, now volunteers at the senior center.

Astrogeologist Ray Jordan (seated) working with other surveyors in Flagstaff, 1968.

Ray Jordan, a former lunar mapper and astrogeologist, poses for a photo at the Joe C. Montoya Senior and Community Center March 5, 2020. Wearing his Apollo 11 hat, Jordan said he felt privileged to be a part of the wonder and excitement during space exploration in the 60s and 70s.

Ray Jordan gives his friend a grin while sitting down for a photo at the Joe C. Montoya Senior and Community Center, March 5. Jordan, after a 27-year career in lunar mapping and astrogeology, now volunteers at the senior center.

Beginning in 1966, Flagstaff local Ray Jordan embarked on a career in lunar mapping and astrogeology which lasted 27 years. Even after his major contributions to the astrogeology field, to those now close to him, Jordan is an avid bike rider with a big heart who gives back to his community.

Jordan’s career ranged from mapping the topography, or landscape, of the moon to analyzing the geology of Mars to create 3D representations of their surfaces. Prior to his career in astrogeology, Jordan said he was also a geophysicist within the oil exploration business and was given a two-year assignment in the North African deserts.

Upon his return to the United States, Jordan said he was offered a job within the mapping training program of the U.S. Air Force. Although it was a cut in pay, Jordan said he accepted the offer because he believed it could potentially lead to something extremely interesting and rewarding.

During his time with the Air Force, Jordan attended a mapping convention where he said he first saw one of the U.S. Geological Survey’s (USGS) maps of Earth made by their astrogeology branch. Jordan said that is when he knew what he truly wanted to do with his life.

When Jordan joined the USGS astrogeology department, it was 1966 and the country was preparing to send men to the moon.

“When [former President] John Kennedy said we’d be going to the moon, [USGS] was staffed by a bunch of mavericks all around the same age,” Jordan said. “So, they had vision and ambition.”

Although there were plenty of young, independent thinkers, or as Jordan called them “mavericks,” within the USGS, Jordan said there were also many older professionals in the organization who thought a lot of the department’s new-age concepts were crazy. Jordan said the older professionals were afraid that the changes being conceived within their department would prove ruinous for their careers.

Jordan and his fellow mavericks remained calm because they did not have a career that was set in stone yet and was focused mainly on the exploration aspect of his work.

“For people like me, it was just an adventure — just a tremendous adventure,” Jordan said.

Astrogeology took Jordan places in his professional life that he had never even thought of previously, which is why he said he loved his career. He said that working in the field of astrogeology provided him with a lot of personal and professional satisfaction.

“In the astrogeology branch, primarily, they did geologic mapping, but I was part of a small group there that did topographic maps,” Jordan said. “We were trained in 3D, whether it was the contours or measurements, how high mountains were, how deep craters, valleys or canyons were. It was a real privilege.”

As his career in astrogeology progressed, Jordan said he eventually began to map the surface of Mars. He said he specifically made topographic maps of Mars to shed some light on its geologic features.

Mapping the topography of Mars taught Jordan just how important it is to view surfaces topographically, rather than only see them as two-dimensional photographs.

“When you look at a photograph, it doesn’t necessarily tell you how high or how deep an area is, but I was in the position where I could create these things in a 3D way,” Jordan said.

Having the opportunity to map Mars was a dream come true for Jordan; a dream he didn’t realize until he looked back on his childhood.

“As a teenager, I would lay on my back, look up at the sky and look at Mars, wondering what it looked like,” Jordan said. “Now, I had the wonderful privilege of going over the space cartography of Mars and making sense of the topography.”

Jordan said he never worked with Lowell Observatory because it wasn’t something he really considered because of the sheer difference between observing through a telescope and actually analyzing geological surfaces. He said when one looks through a strong telescope, they could potentially see Mars’ polar caps. However, astrogeology primarily uses small spacecrafts and rovers to collect samples and analyze the terrain of the planet using spectroscopic images.

“With a spacecraft orbiting Mars, you can see a lot of detail like flooding and erosions, a lot of geology ... you can’t really see that through a telescope,” Jordan said.

Finding some of Jordan’s old cartographic works could be difficult nowadays because more updated data has come along and drowned out Jordan’s work since he worked for the USGS. However, Jordan and his team laid the foundation for all the advancements that followed.

Jordan said he loved his job in astrogeology, not only for its uniqueness but also because it allowed him to live his life in a state of exploration and wonder. He said it is important for people to find a career they love and are truly interested in, even if it doesn’t provide them with the income they are looking for. Jordan made the decision to move to Flagstaff 54 years ago purely to map the moon and has had no regrets since then because the city has offered him so much more than just professional success.

“I was lucky,” Jordan said. “I was very fortunate to have such an interesting profession and also to live in such a beautiful area. I couldn’t ask for anything better.”

After his professional life, Jordan continued to lend a helping hand wherever he could at Flagstaff’s local Joe C. Montoya Community and Senior Center. The recreation supervisor of the center, Matt Faull, said Jordan has been a regular at the center every day since he began working there in 2008.

Faull said Jordan has often shared stories of his past career with the USGS, as well as some of his personal passions.

“He’s an avid bike rider,” Faull said. “He rides his bike to the top of [Arizona] Snowbowl [Ski Resort] every birthday, including most recently his 81st.”

Both Lucero and Faull expressed that Jordan’s help in the center is appreciated by everyone who frequents it because he truly does contribute a lot of time and effort.

“He is somebody who wants to pitch in and contribute to the greater good,” Faull said. “So, he volunteers every day cleaning up the dining room and he’s always trying to be helpful and useful to his community.”

Lucero characterized Jordan as an amazing member of the Flagstaff community who never hesitates at the chance to help, no matter what he’s doing.

“I would characterize Ray as an affable guy,” Faull said. “He’s very smart, friendly and he’s patient. He needs to be patient with other people who aren’t as smart as he is.”

Throughout both his professional and personal life, Faull said Jordan has truly made a difference in the city and on this planet. Not only has Jordan aided in the development of astrogeology, but he took part in a career that he said he truly loved and enjoyed.