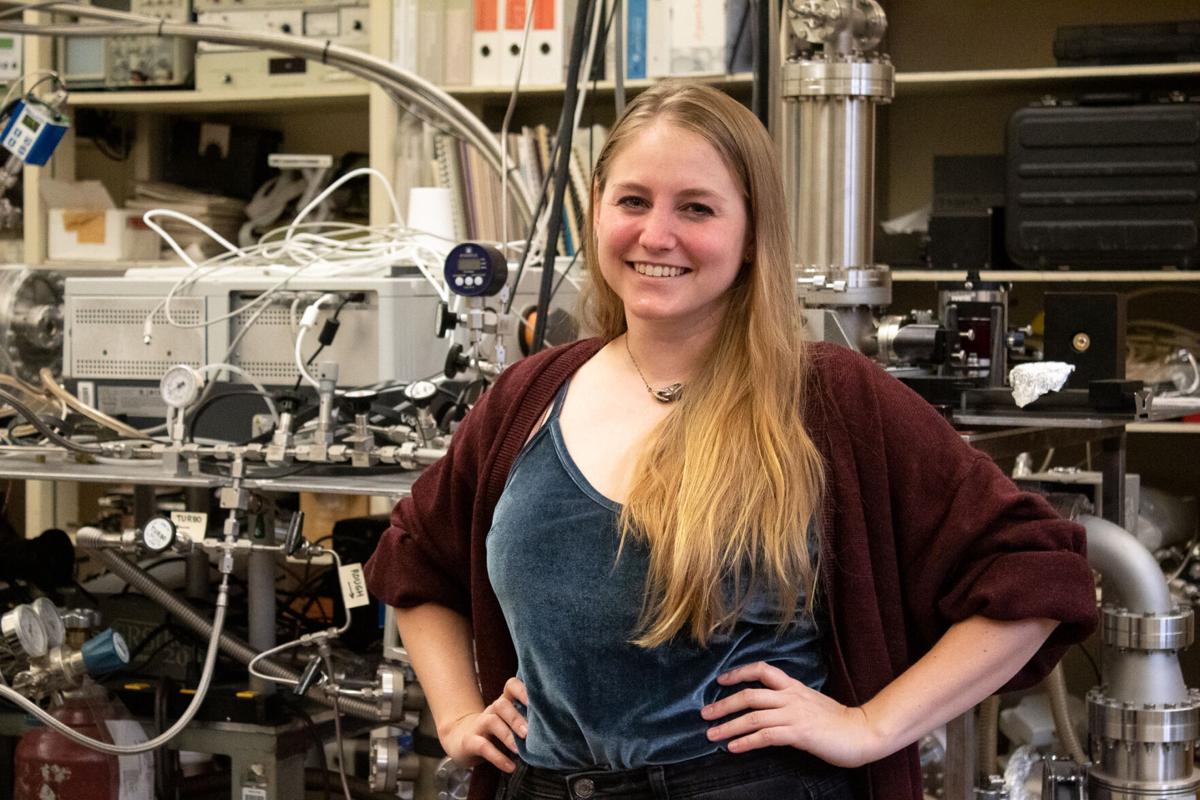 Anna Engle does most of her research in the lab with a machine called a cryogenic system, Sept. 13. 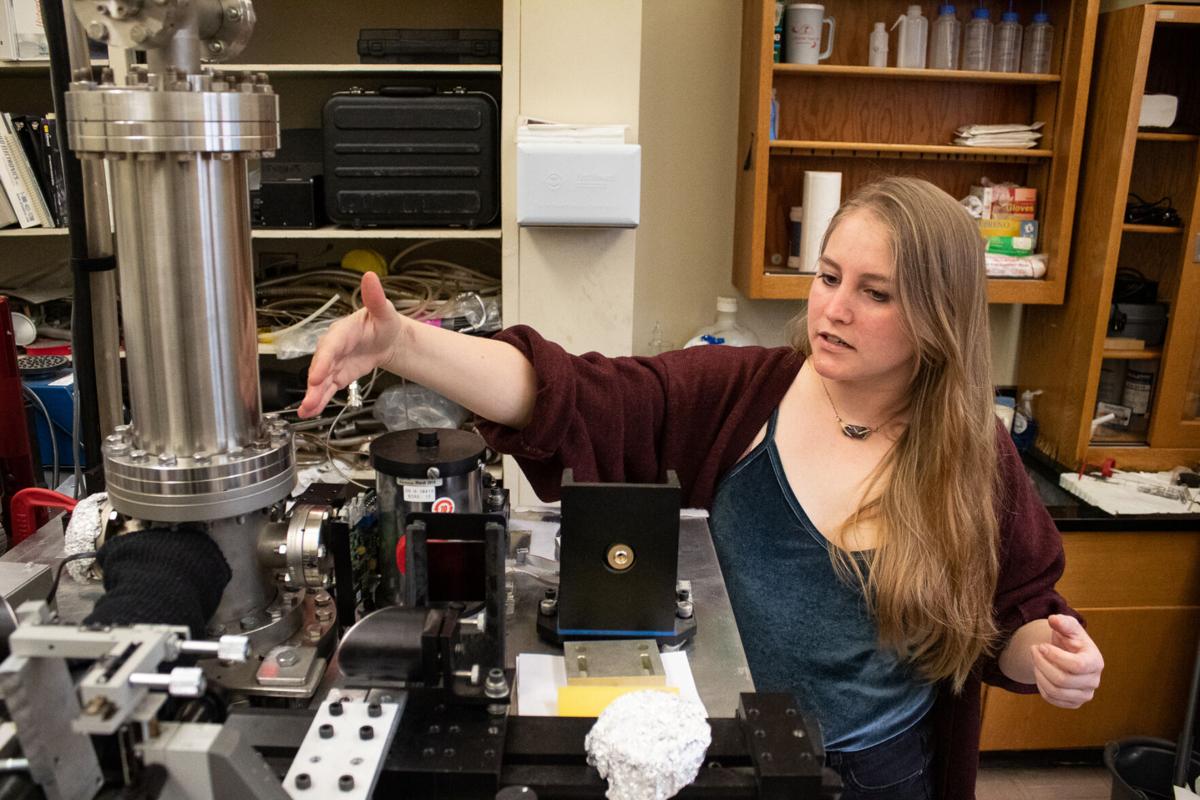 Anna Engle shows the machines she works with as part of her research. 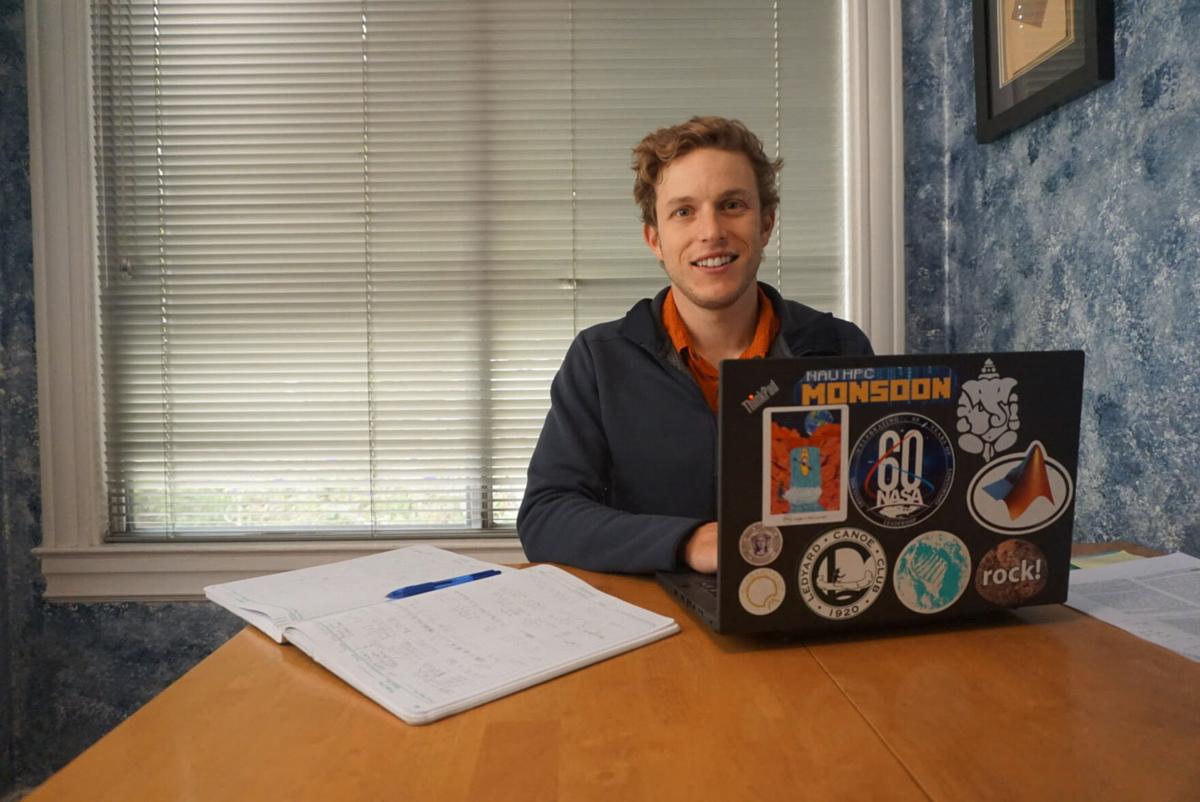 Ari Koeppel is studying materials on the surface of Mars to figure out whether it could have once hosted life. To help better interpret what is on Mars, he is collecting data from volcanic deposits in Arizona, Iceland and Hawaii, Sept. 13. 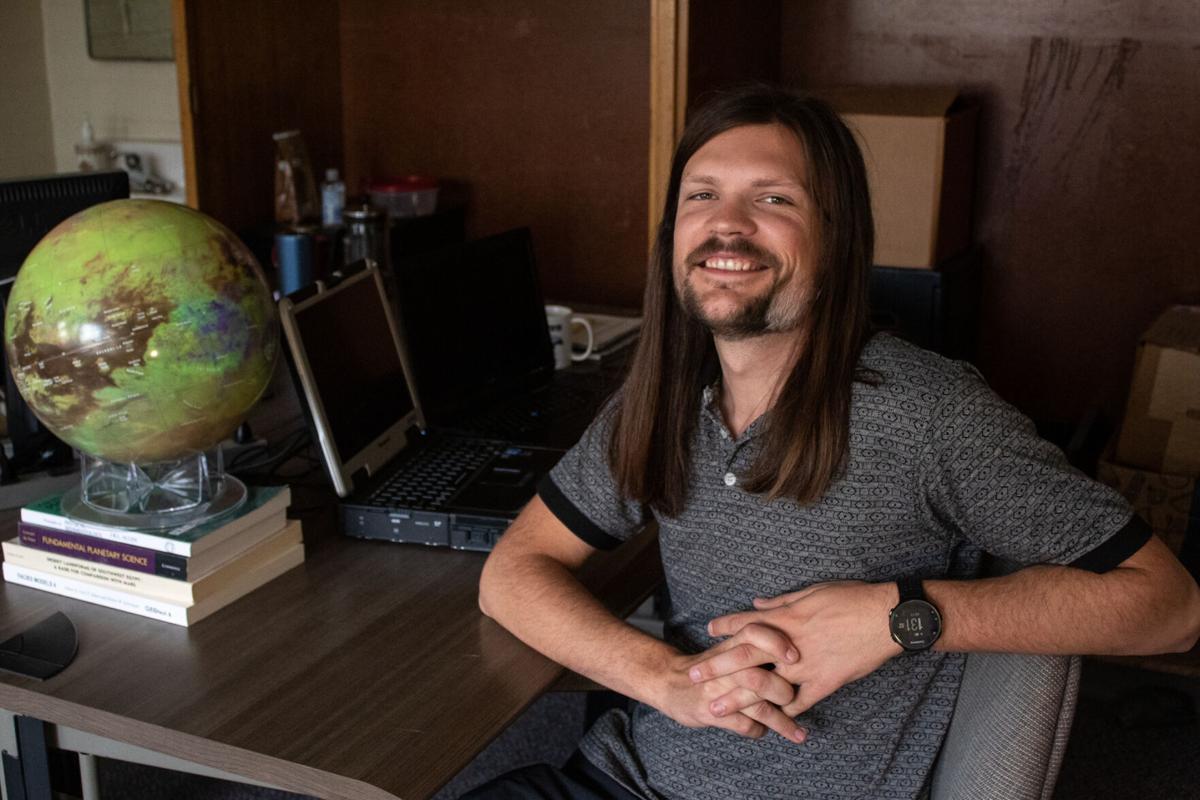 Anna Engle does most of her research in the lab with a machine called a cryogenic system, Sept. 13.

Anna Engle shows the machines she works with as part of her research.

Ari Koeppel is studying materials on the surface of Mars to figure out whether it could have once hosted life. To help better interpret what is on Mars, he is collecting data from volcanic deposits in Arizona, Iceland and Hawaii, Sept. 13.

Three years ago, NAU launched its doctoral program in astronomy and planetary science. Now, with 27 students in the program, its reputation and success has led to various research projects and grant opportunities for students.

Maue said the FINESST grant provides graduate students studying Earth and planetary science funding on an independent project. The grant will provide students three years of funding up to $45,000 a year and can pay for stipends, travel expenses, paper publications and even field work.

With its many benefits, this application process is extremely competitive as graduate students all over the country can apply, Koeppel and Engle explained.  Of the hundreds of students who applied, 34 were awarded the FINESST grant.  The three NAU students who were selected this year tied with the University of Arizona for the highest awardance of any institution nationwide.

“I think that what they’ve been saying is that we got about 9% of the 34 just from Northern Arizona University,” Engle said. “We cleaned up this year.”

Now, with funding for up to three years on their research, these graduate students are able to continue doing what they are passionate about without the stress of finding funding to do so.

Engle, who is in her second year of the doctorate program, is focusing her research on Titan, the largest moon of Saturn.

Engle said she plans to explore the lakes on Titan to see what kind of consequences this has to the geology in the surrounding area.

Engle said there is some idea of the chemical composition of the lakes on Titan from NASA’s Cassini spacecraft, which explored Saturn and its family of icy moons and finished its mission on Sept. 15, 2017.

Working at the Astrophysical Ice Laboratory at Lowell Observatory provides Engle the necessary tools to continue her research. Engle is conducting experiments using a system that can go down to 30 K (Kelvins), or about negative 243 C, to look at varying mixtures of nitrogen, methane, ethane, propane, ethylene and acetylene.

From there, she will be able to mix samples and put them into a cryogenic chamber, and use spectroscopy, a method that uses light to gather information about materials, to understand the quantities and interactions happening in the samples.

Maue, a fifth year doctorate student, transferred from the University of Tennessee with his adviser a year ago and said Flagstaff is a very cool town and is good for what his research entails.

Maue is also studying Saturn’s largest moon, Titan, through information provided by NASA’s Cassini mission, specifically from the radar instrument that was on board. He mentioned Titan is the only

other body in the solar system that has stable liquid on its surface aside from Earth. However, an exception to this similarity, Maue explained, is Titan’s cold surface that measures about 95 K or negative 290 degrees F.

Maue said that instead of a surface made of silicate rocks and flowing water like on Earth, Titan is composed of liquid hydrocarbons like methane and ethane that flow over a surface made of mostly water ice and organic material.

“I study these features, and specifically the pebbles and cobbles that we have imaged at the surface,” Maue said. “Broadly speaking — to understand how sediment abrasion or sediment breakdown occurs under those conditions as compared to the Earth.”

With his grant, Maue said he plans to visit Death Valley National Park and nearby areas to collect further data of sediment properties in the field and correlate those findings to the radar backscatter to try to make better interpretations about the sediment on Titan.

Koeppel, who is in his third year of the doctorate program, also plans to visit locations outside  Flagstaff to further his research on Mars.

“I’m interested in questions of what was going on in the early solar system that allowed for life to become so prominent on Earth and whether those conditions were also prominent on Mars,” Koeppel said.

Primarily, Koeppel said he is trying to touch on answers to those questions by using both satellite data from Mars and comparisons to materials on Earth. He said that although few rovers have been sent to the surface of Mars, most of the surface features of the planet are known because of satellites orbiting around Mars taking pictures.

One of the useful data sets retrieved from those satellites is infrared imagery, Koeppel explained, which is imagery in wavelengths of light longer than can be seen with the human eye. Infrared imagery can provide information regarding the ancient environments that are recorded in the surface materials, Koeppel said.

With this, Koeppel will work to interpret the geological history on Mars by simulating infrared satellite data at key locations including Flagstaff, Hawaii and Iceland.

For Maue and Koeppel, applying for this NASA grant for a second time provided them a unique lesson. Through their experiences, both mentioned they were able to take comments from their previous proposals to strengthen them this year.

“Winning the grant has been kind of a nice confidence boost,” Maue said. “I have been able to successfully bring in money with my research ideas and hopefully make a career in this field. I’ve learned about myself and that I can do that sort of thing.”

In preparation for applying for such a prestigious grant, Engle, Maue and Koeppel gave thanks toTy Robinson, assistant professor in the department of astronomy and planetary science, who led a proposal writing workshop. Koeppel said the class discussed covering various important aspects that should be considered when writing a proposal, including identifying the audience. The students also thanked their advisers for the work they have put into the grant process.

Receiving a prestigious award from not one, not two, but three graduate students is a testament to the dedication and passion of faculty, staff and students in NAU’s Department of Astronomy and Physical Science. Great accomplishments have been achieved, and there are more to come.