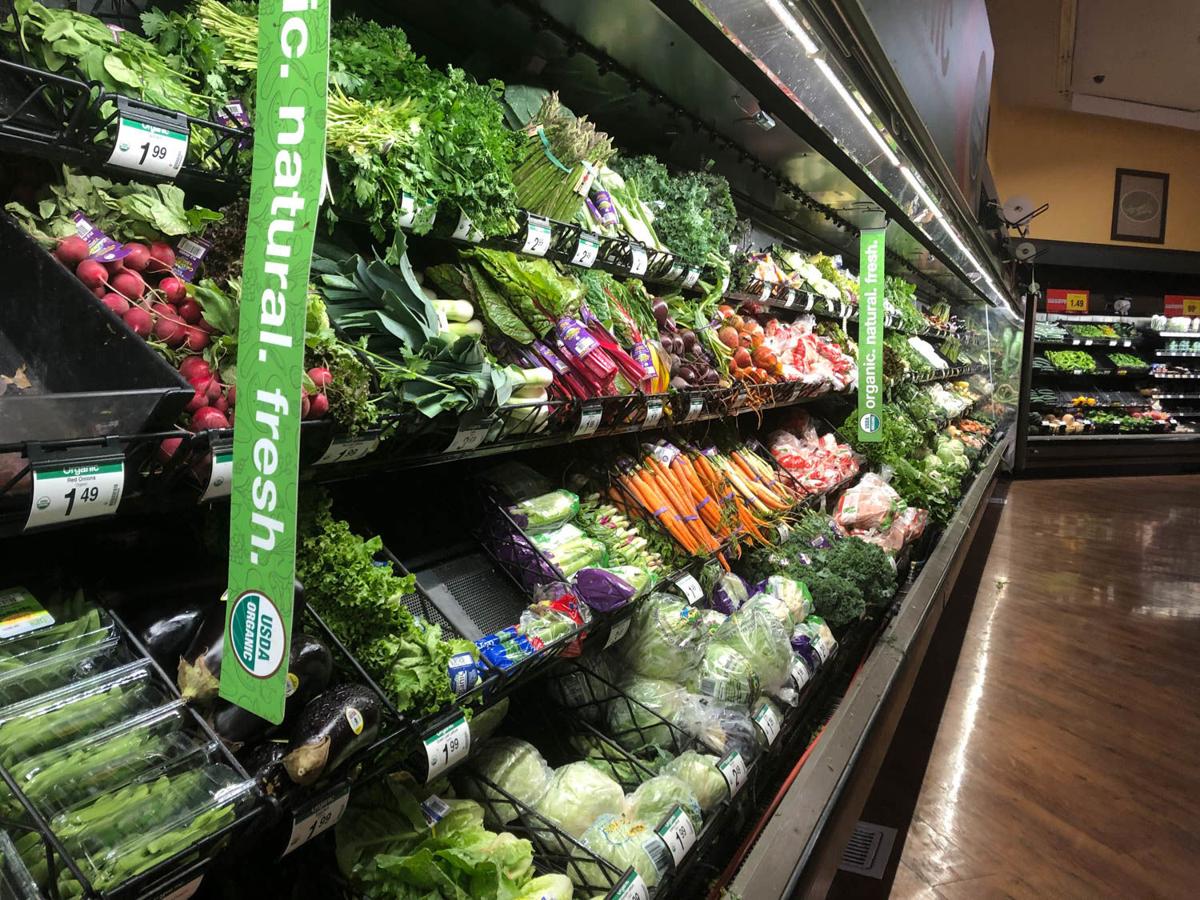 Fresh produce on display at Fry’s in Flagstaff, Aug. 20. 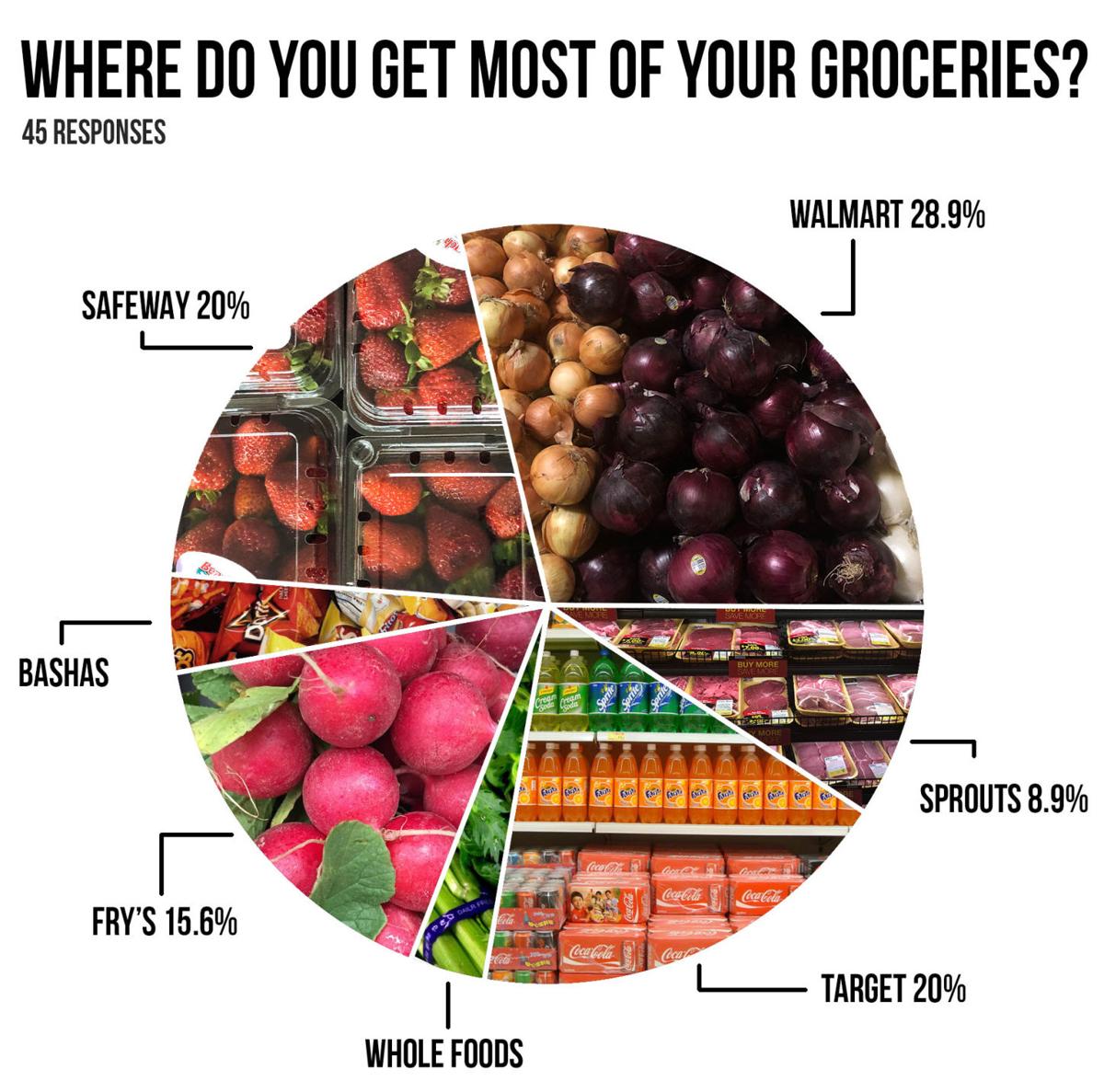 Fresh produce on display at Fry’s in Flagstaff, Aug. 20.

There are many different grocery stores available in the greater Flagstaff area, including Fry’s Food Stores, Safeway, Target, Walmart, Sprouts Farmers Market, Whole Foods and Bashas’. However, an unofficial survey of 45 NAU students revealed that 29% of students tend to go to Fry’s for most of their groceries. Tied for second most popular were Safeway and Target at 20%.

The most common reason for students going to these grocery stores is proximity, and the second is how inexpensive the food is. Another reason is simply that the students liked the selection of products offered.

Senior Trinidad Jimenez said he only recently started going to Safeway because he is no longer on a meal plan.

“[Safeway has] more options than Sprouts, but it’s closer than Fry’s,” Jimenez said. “Safeway is cheapest in terms of how much variety I can get and how close it is to where I live on campus.”

Jimenez said Safeway’s deals, such as those provided by the Safeway club card, are another reason he goes to that grocery store.

Jimenez said although he does shop around at other stores, he usually goes to Safeway. He said he goes to Fry’s only if he is in the area, because it isn’t the closest store to him.

“Sometimes I go to Sprouts as well because I like a lot of the stuff that they have there,” Jimenez said. “At Sprouts they tend to have nicer things. But if I want to get cereal or something, they don’t have regular cereal.”

Jimenez said he likes Sprouts because the selection at Sprouts is specialized. However, the wide selection of items at Safeway is what keeps Jimenez coming back.

Jimenez said Safeway better provides for his needs as a student in regard to budget and time limitations.

Unlike Jimenez, Senior Emma Harries shops primarily at Fry’s for her groceries. However, Harries said her reasoning is similar to Jimenez.

“It is cheap, but the atmosphere is something I appreciate,” Harries said. “Though the actual company, Kroger, is a chain, I like how Fry’s feels local and that each location throughout the state caters to the locals’ needs.”

“Some people may be shocked that I shop at Fry’s and not Whole Foods,” Harries said. “But hello, I am balling on a budget. Fry’s carries high quality produce that gives me plenty of options.”

Harries said vegan meats, milks and pre-made frozen dinners and vegetables are cheaper at Fry’s compared to places like Whole Foods or even Safeway.

Harries said another reason Fry’s is affordable is because they offer a 10% discount for those over 65 years old on the first Wednesday of every month.

“I thank my dad for his old age every first Wednesday when I see myself saving $10 to $30 on my grocery bill,” Harries said.

Although there are no discounts available specifically to students who shop at Fry’s, assistant store manager John Griffis said that students shop there “because it’s where their parents shop.” Even when students’ parents aren’t around, Griffis said they can share Fry’s discount cards that are available to everybody.

Another factor that is important to some students when deciding where to get groceries is whether the store has a bulk section. Harries said Fry’s has a bulk section similar to but smaller than Sprouts, which she likes to take advantage of.

“Buying in bulk is often cheaper than packaged, processed foods,” Harries said. “And I also find the bulk section to be low-waste, which is important to me. I bring my own jars and have the cashiers tare the weight.”

Senior Valentine Sargent is trying to transition to a zero-waste lifestyle and shops primarily at Sprouts because of its produce and bulk selection.

“I think that Sprouts is really accessible and affordable if you’re going to a zero-waste lifestyle,” Sargent said.

As an example, Sargent said instead of buying cereal in a box, she will get granola and use that as cereal. Sprouts store director Michael Hager said the grocery store carries 216 bins of bulk products.

“We run great deals on it,” Hager said. “The greatest thing about bulk is you’re not paying for any of the labeling costs or merchandising costs of products. You’re just getting it as it was intended, so you save quite a bit of money.”

Not only can shoppers purchase bulk products like beans and rice at Sprouts, there is even a bulk spice section.

“You’ll save on average $2 to $3 by buying the spice out of the bulk spices as opposed to buying the little glass jars,” Hager said.

Hager said the focus of Sprouts as a company is on produce. He said many students shop at Sprouts looking for more healthful alternatives, and that this is particularly clear with how popular their to-go foods are.

“Our convenience food moves really well here,” Hager said. “Our pre-made sandwiches and things like that move really quickly during the lunch time.”

Hager added that Sprouts being so accessible to students on campus is another reason why they choose Sprouts for their go-to grocery stop.