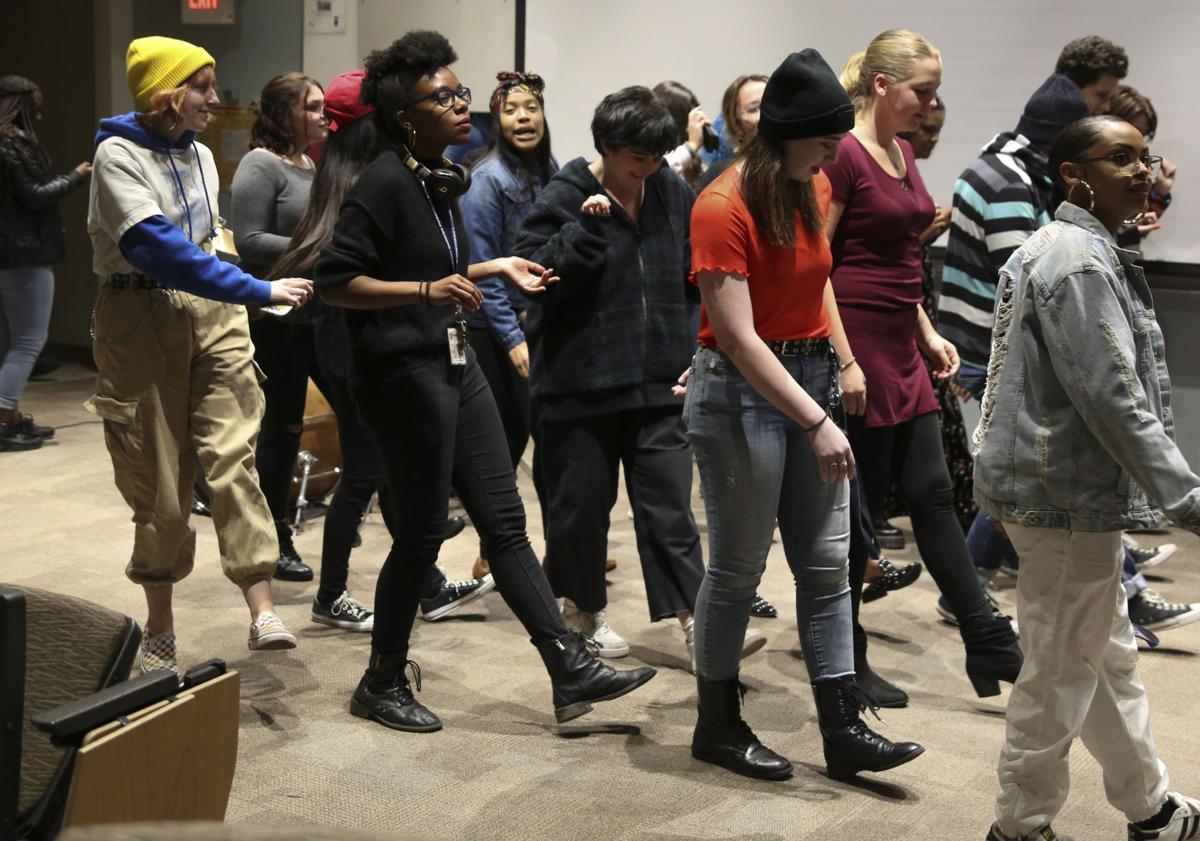 Members of Soul Sugar dance during intermission at an open mic night Oct. 10. 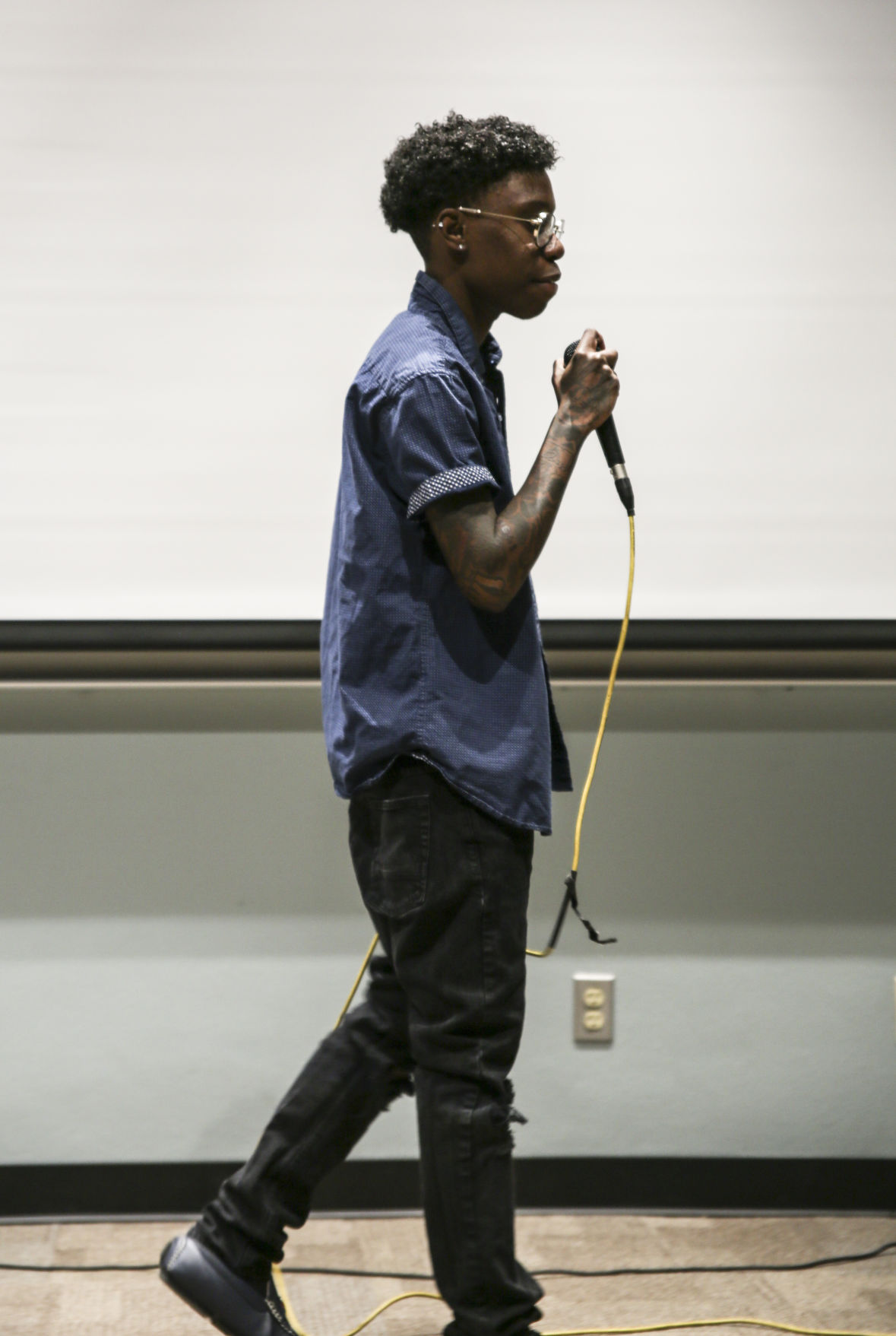 Kobe Lee, a leader for the Soul Sugar club at NAU, speaks before opening the stage up to performers Oct. 10. 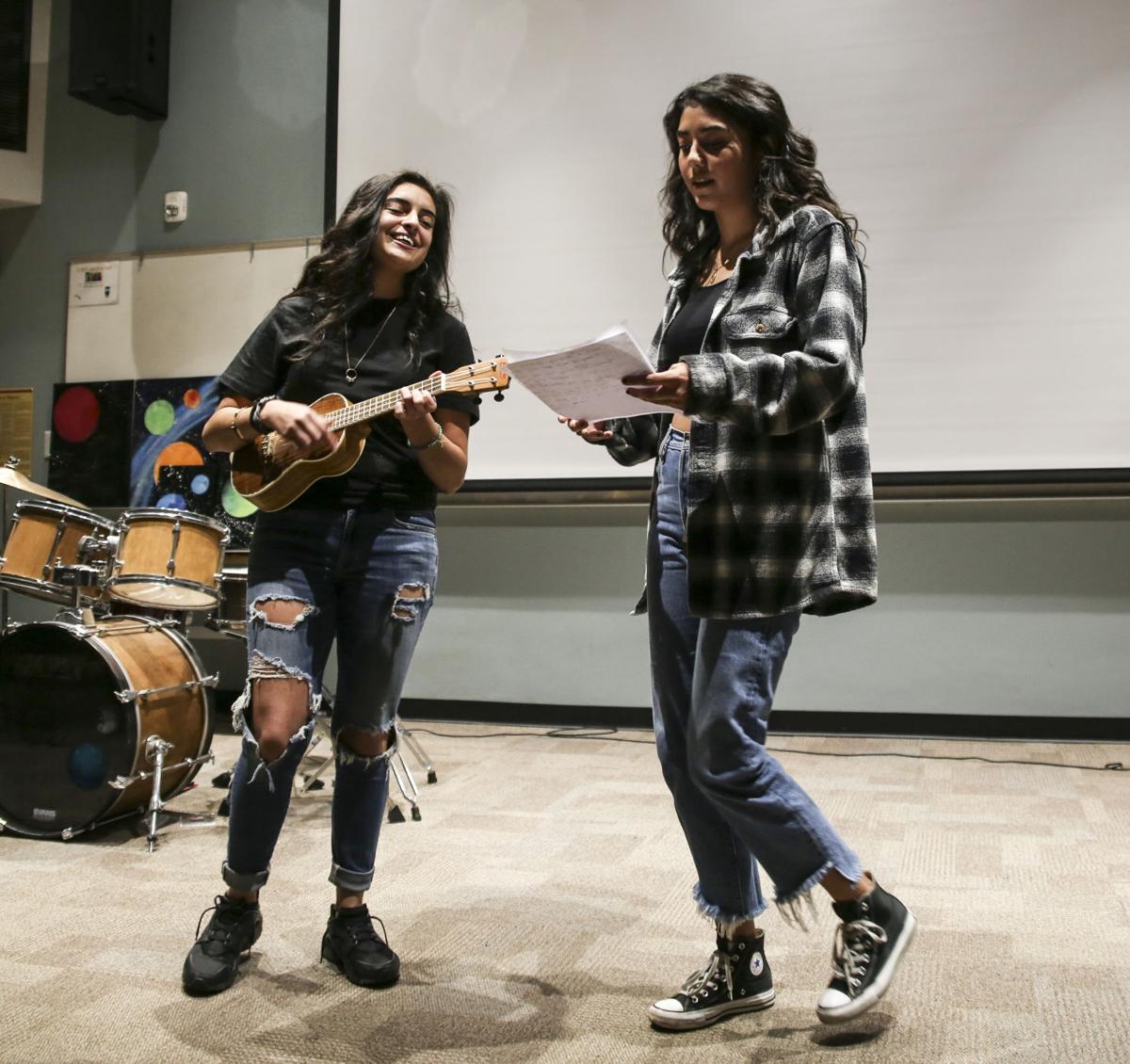 Members of Soul Sugar dance during intermission at an open mic night Oct. 10.

Kobe Lee, a leader for the Soul Sugar club at NAU, speaks before opening the stage up to performers Oct. 10.

Imagine a space where free expression and open minds are a priority. Picture being surrounded by dozens of others who value those same things. The NAU Soul Sugar club provides a space where people can come together to share their talents in an open and judgment-free environment. The sole purpose of the group is to allow anyone to feel comfortable being themselves.

The club has been active for three years. Soul Sugar was created by NAU graduates Lissette Flores, Kevon Mckinney, Kiara Brown and senior Brooke Tarver. These individuals came together and developed a welcoming and creative subcommunity.

Soul Sugar was formed from two different preexisting groups, Soul Tribe and the Brown Sugar Hour radio show, which came together with a common goal of providing a safe and comfortable environment for free expression. After three creators of Soul Sugar graduated, the club was handed to current sophomores Kobe Lee and Rina Garcia, while Tarver still has a leadership role in the group.

The freedom of expression Soul Sugar promotes has been the catalyst for many individuals who attend with no intention of going on stage, yet by the end of open mic night decide to perform as well. This was the exact case with Lee, the current leader of the group.

Lee said he first participated in Soul Sugar when the hosts made their last call for performers at the end of a meeting and finally decided to join in. He said he was nervous and never thought he would stand in front of an audience to read his personal work. Despite his nerves, he held his book to his face and shyly read to the supportive crowd, which marked the beginning of what would become his very own community.

“As time went on, I wanted to be a bigger part of it — to pass out flyers, anything,” Lee said.

The passion for the club held by its members and leaders comes from a place of love and acceptance. Garcia said each leader and member brings something unique and valuable to the group, so the purpose of Soul Sugar differs from person to person.

For Garcia, the most important part of the club is building a community. Club members refer to Soul Sugar participants as a family of artists.

Lee agreed with Garcia’s values of family and community, but also values the club in other ways.

“I like the idea of having a space for people to come to when they feel like they don’t have anywhere else to [go],” Lee said. “Half of these people don’t know each other, but here in this space it feels free to get to know different people. It doesn’t matter what you look like. It doesn’t matter your ethnicity. It’s not just for one person.”

Giving people freedom of expression comes from setting an expectation for those who attend. The audience is required to be open and accepting of the individuals who perform. Garcia said it is important for attendees to know they are more than just audience members and are, instead, part of a family.

“We make sure to know people’s names,” Garcia said. “We try to get to know people personally and know their stories. That’s what makes it more of a family.”

Although Soul Sugar has no direct ties to religion, the club hosts a prayer hour at each of their meetings, when a projector runs various sermons and the hosts prepare the stage.

All three of the current leaders running Soul Sugar are religious. It is an important part of their lives, but Lee said they do not impose it upon their members.

“Brooke was actually the person who thought of the prayer group idea, and it is open for those who are religious. But that does not revolve around what we do,” Lee said. “Not everybody here is religious.”

Garcia said the club has grown and plans to expand. She said expansion within Soul Sugar does not mean everyone needs to perform. It can mean more spectators are welcome to absorb the inspiration that comes through open mic nights.

“We can’t have performances if we don’t have an audience,” Garica said. “We definitely welcome people just to show up. It just encourages you to write. I brought a friend who had never been to open mic before — had never written poetry before. After this, she went and bought a notebook and started writing. It’s cool that this can inspire people to heal.”

This resonates with many individuals who attend and perform, including poet and sophomore Javier Ramirez, who is a regular performer at Soul Sugar open mic nights.

The positive atmosphere does not always mean there aren’t hardships. Lee said there are limits to what can and cannot be said within this space.

Lee said although rare, there have been instances by individuals who have not upheld the values Soul Sugar represents.

“If you say something that is not OK, I will gladly take the mic from you and probably tell you not to come back, or to come back with different content,” Lee said.

The group will not accept language that is offensive to entire groups of people or hate speeches on stage — anything that is against what the club stands for. Hate speech has been limited, and the environment remains free to all.

“I’ve had people come up to me and say, ‘I feel attacked,’ or, ‘I didn’t feel good about this,’ and that hurts me,” Lee said. “I feel as if I’ve been attacked, because I’m the first person that holds the mic.”

Soul Sugar incorporates the diversity of the Flagstaff community and the acceptance the world often needs into each of their meetings. This club brings together many people from around Flagstaff to form a family.