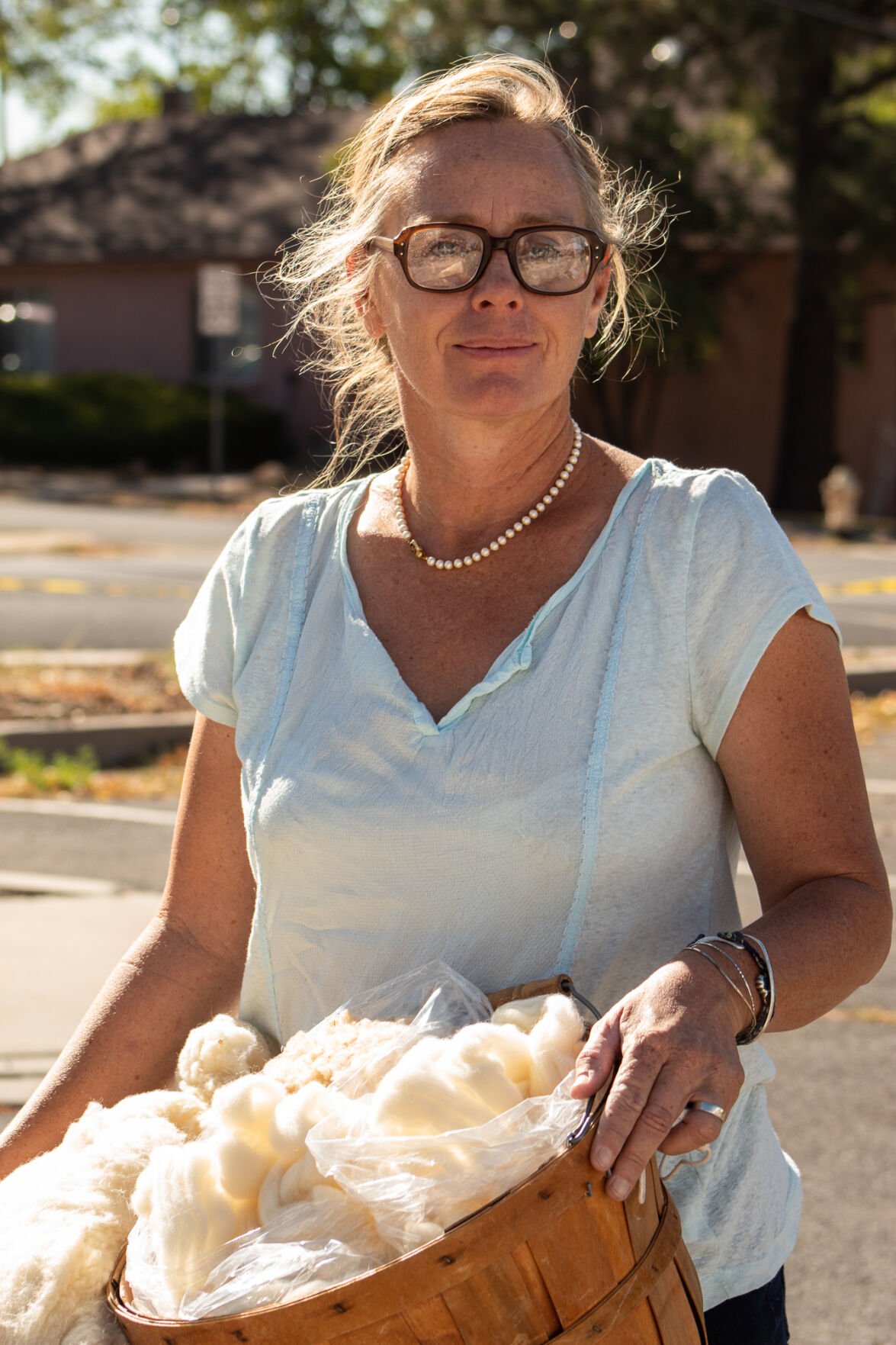 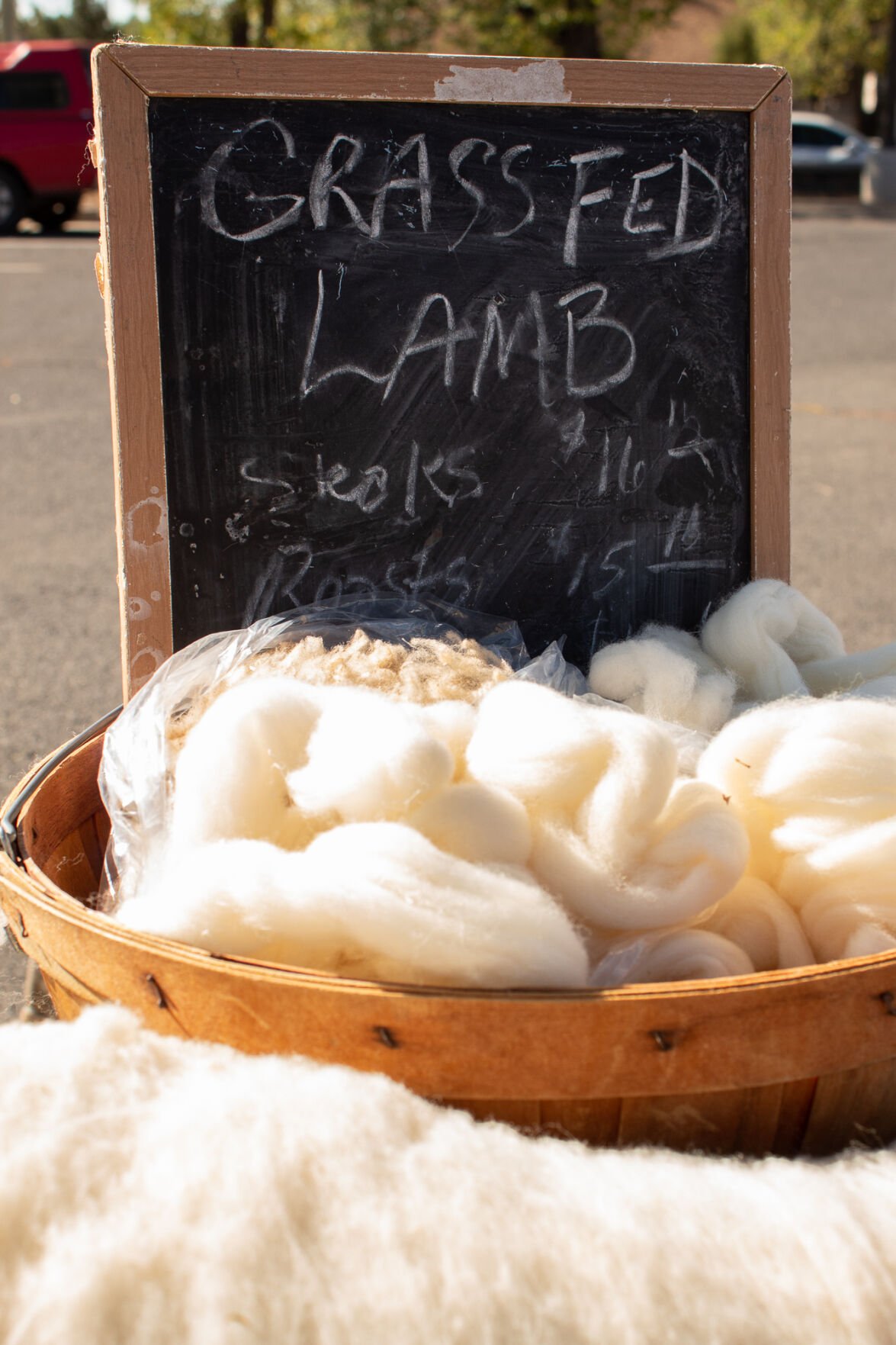 Strong Mouse Merino owns over 100 lambs and one ram on their farm, Oct. 11. 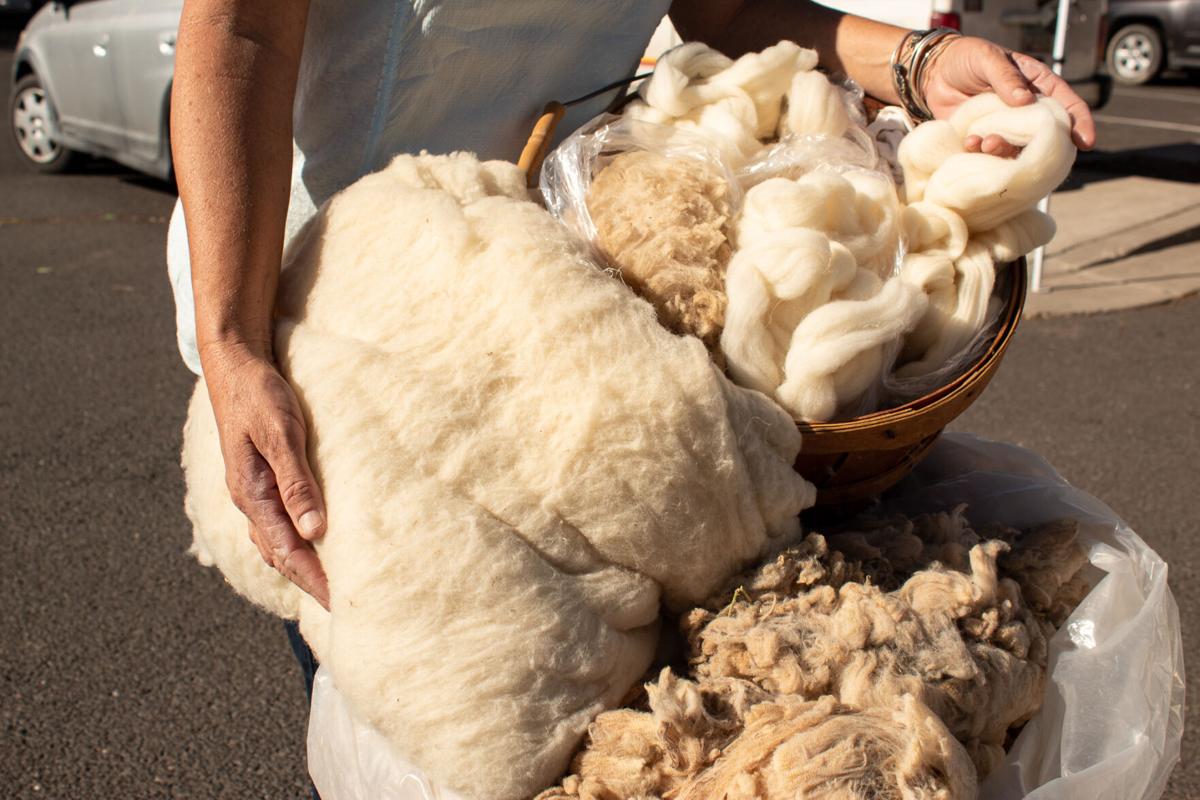 Memi Perkins gathers the wool that is sold at the Flagstaff Farmers Market and used for Strong Mouse Merino's crafts, Oct. 11.

Strong Mouse Merino owns over 100 lambs and one ram on their farm, Oct. 11.

Memi Perkins gathers the wool that is sold at the Flagstaff Farmers Market and used for Strong Mouse Merino's crafts, Oct. 11.

Strong Mouse Merino is a sheep farm based on the idea that common people and entities can have a big impact, explained owner Dulcy Perkins. She said she is working toward creating a sustainable farm that enriches the lives of people in the community and contributes to the local economy.

Dulcy Perkins’ farm is located in Cornville, Arizona, a town about an hour south of Flagstaff, where she bought nine acres of land about two years ago. She said she hopes to create a space for traditional crafts like spinning and weaving to be learned and practiced in the community.

Growing up on a cattle farm, Dulcy Perkins said her interest in the fiber arts ­­— arts consisting of components such as fabric or yarn — is actually what drove her to start her own sheep farm.

“I had the interest in learning how to process wool into yarn,” Dulcy Perkins said. “I really find the fiber arts to be quite lovely, so I bought those first six sheep specifically for that purpose.”

Dulcy Perkins is currently working on setting up an educational experience for homeschooled children to learn how to process raw wool for felting and spinning. She said teaching people where their clothes and food comes from is extremely important in order to create sustainable communities. Having knowledge of how and where material goods are created also causes people to be more likely to take care of their items and appreciate the work that was put into them, she explained.

When items are produced across the world, Dulcy Perkins explained, we don’t see all of the time and effort that goes into creating them. She said this problem occurs when clothing is created in China, but sold in the United States.

“When it’s so far removed from us individually, we don’t know how much overgrazing is occurring so that the economy in China can flow, so they can get to Americans this cheap product that we will wear for a short amount of time,” Dulcy Perkins said. “If you can source what you’re getting from local places, you can see this is a place that is concerned about the viability of their pasture.”

Dulcy Perkins said large industrial farms are less likely to care about pasture viability because their focus is on how much product can be made in the shortest amount of time for the cheapest price.

While small local farms also have to think about money, Dulcy Perkins said they are more likely to also think about the long-term effects of the farm, as well as keep money within the local economy. Perkins’ sister, Memi Perkins, helps sell the lamb meat at farmers markets, which helps achieve Strong Mouse Merino’s goal of supporting local economies.

“I love to hear when people spend money locally because that just keeps the money flowing around in a circle,” Memi Perkins said. “So, that $10 that you spend, if it stays local, becomes $1,000 because it gets moved so many times within that local economy. You spend $10 online, and that $10 is now taken out of your local economy.”

Dulcy Perkins is also a volunteer for Water for Agriculture, a group that discusses ways to manage the finite amount of water in Arizona. According to its website, the group’s goal is to select and design a community-led project based on locals’ priorities and interests for water and agriculture. Other goals include implementing the project through education, research and collaboration.

One idea for the project is creating a brand for farmers in the Verde Valley who adhere to criteria set for water conservation, Dulcy Perkins said. She also said the brand would be called Verde Grown and producers who adhere to the guidelines would be able to display a label on their products when they are sold at farmers markets or grocery stores.

Dulcy Perkins said she feels as though this brand would compel people to buy their produce because they would know where it came from, how it was grown and that the people who grew it are using their resources wisely.

On top of a brand that compels farmers to use water more efficiently, Dulcy Perkins said another sustainability initiative she would like to see is the use of mobile butchers in the Verde Valley. She said a meat processor who travels to the farms would be beneficial because that way, farmers wouldn’t have to haul their livestock to a different location that is potentially far away in order to slaughter their animals. A mobile butcher would be able to cut the meat exactly how the farmer wants, as well as make sure all of the parts of the animals, including organs get used, Dulcy Perkins said.

One of the biggest problems with taking livestock to a butcher in a different place is the expenses that come with it, Dulcy Perkins explained. The saved costs of having a butcher come to the farm would allow the farmers to have more meat butchered at one time. This could potentially allow small producers to sell directly to grocery stores and farmers markets.

However, an issue with the idea of mobile butchers is they must get United States Department of Agriculture (USDA) approval, which Dulcy Perkins explained is no easy task. She said she knows of a mobile butcher based in Williams, Arizona, but they are not yet USDA approved. While she doesn’t have a lot of power when it comes to changing the regulations, one thing Dulcy Perkins said she plans to do is write to local government officials about the issue of mobile butchers to see if their contribution would make an impact.

Dulcy Perkins said she hopes to start reaching some of her goals for the farm within the next few years. Creating a space for people to participate in traditional crafts and a sustainable farm culture are just a few of these goals. Even though she said she sometimes feels small, she has big dreams for Strong Mouse Merino.

“I was feeling a little bit down and small in the world, and someone I know was like ‘Yeah, you are small — like a mouse. Like a really strong mouse,’” Dulcy Perkins said. “It’s kind of like even if you are just a little person or entity, you have a lot of capabilities.”