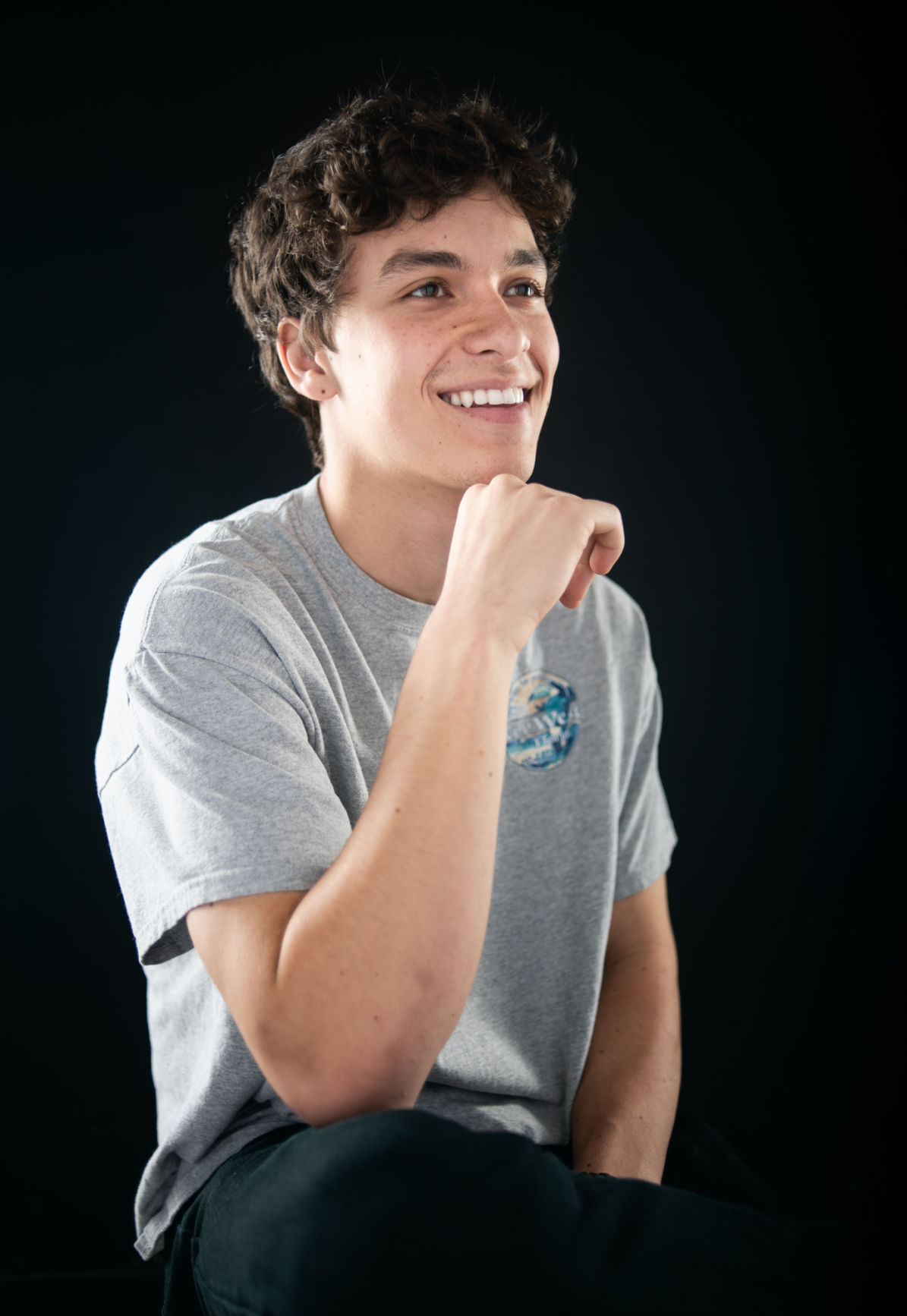 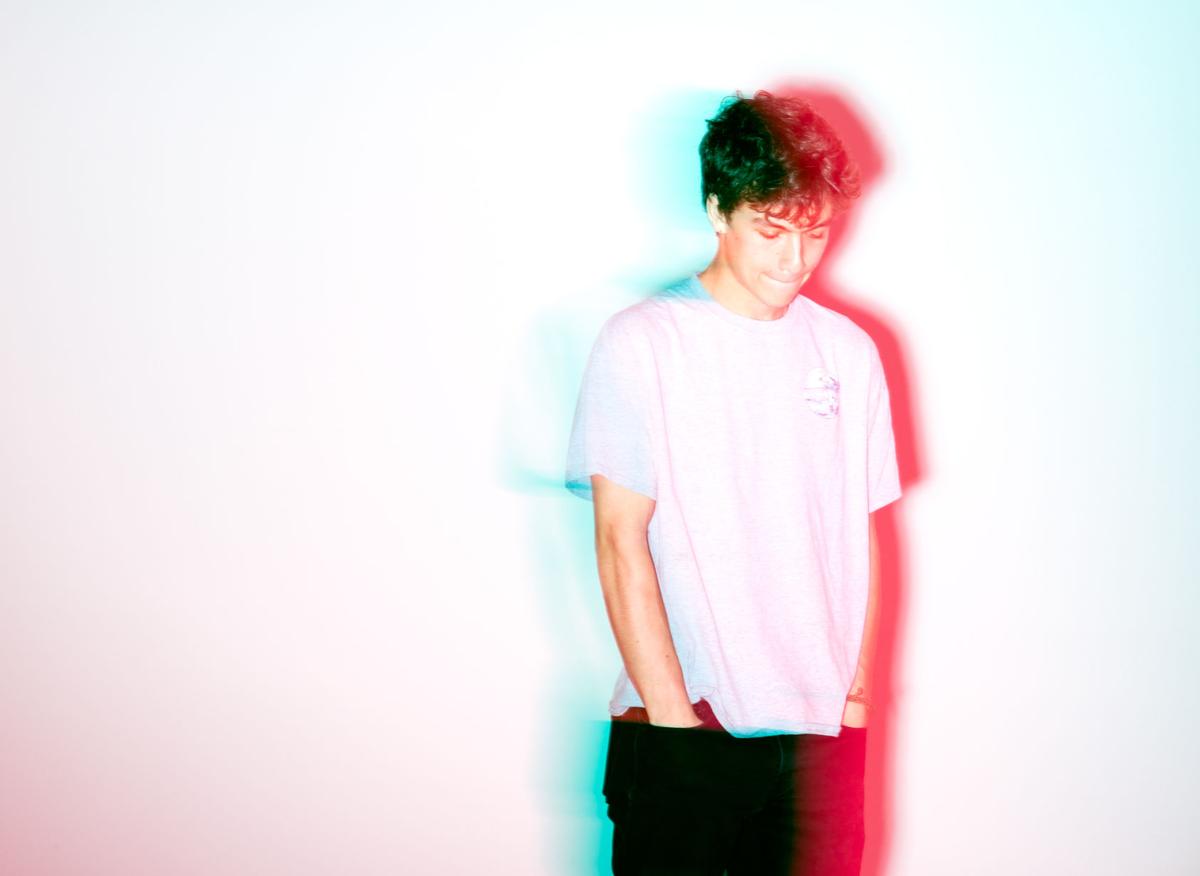 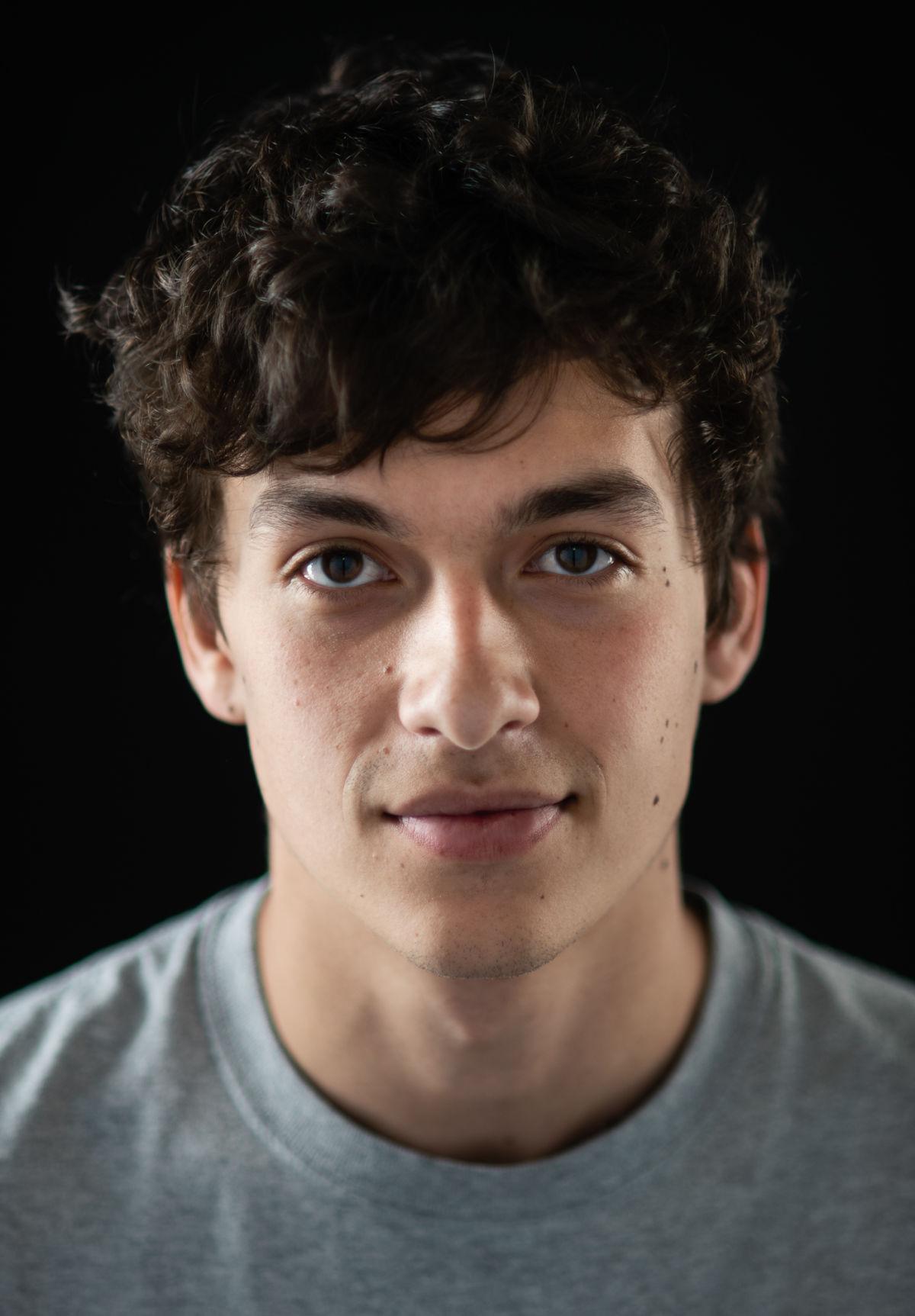 Freshman musician Marius Britt poses for a portrait, Feb. 24. Britt was inspired to focus on his music when coming to college, leading to the creation of “Room 135.” 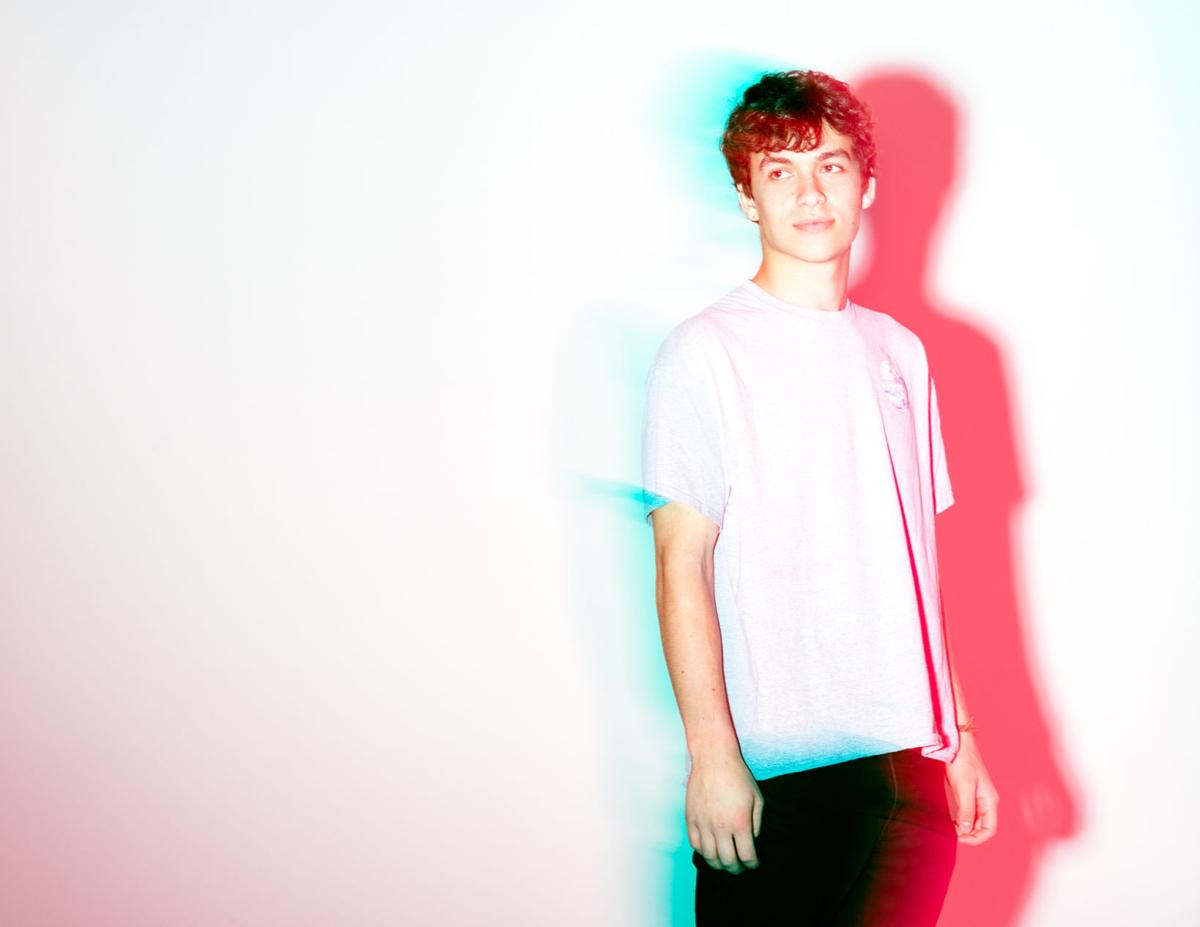 Freshman musician Marius Britt poses for a portrait, Feb. 24. Britt was inspired to focus on his music when coming to college, leading to the creation of “Room 135.”

For many, a freshman dorm room is a place for late-night studying, bonding with a roommate and making memories with newfound friends. For freshman Marius Britt, his dorm room is also the namesake of his first album, “Room 135,” where Britt wrote, recorded, produced, mixed and mastered the album.

Britt said the experiences he had in college thus far have helped inspire his songwriting and pushed him to be creative. With a fresh start and meeting many new people, the more or less culture shock of coming to NAU provided Britt with material for song lyrics, as the new memories interacted with memories of his life before Flagstaff.

Drawing much of his inspiration from Kevin Parker’s psychedelic music project Tame Impala, Britt said that while writing “Room 135,” themes and feelings in the music mattered more to him than the specificities and mechanics. In an Instagram post promoting the album, Britt reflected on human experiences that found their way into “Room 135.”

“There’s love, loss, self-criticism, true happiness and complete feelings of loneliness throughout these songs,” Britt said in the post. “In other words: life.”

To Britt, it was important to create an album with songs that would mean something to the listeners. He said he attempted to craft stories and experiences in each song to make them more worthwhile. In every song, and even in creating the album, Britt valued the journey over the destination.

Scottsdale Community College freshman Greyson Bacal is a close friend of Britt’s. Bacal said Britt has continued to grow musically throughout their friendship, and that Britt’s taste shifted from Green Day to Linkin Park to The Black Keys to Tame Impala, all of which have inspired the music he makes. Even with outside influences, Bacal said he can hear what makes Britt’s sound unique.

“Within the last couple of years, Marius really fell into his own sound and developed his own style, which is a mix of psychedelic, beach, alternative and rock, if that’s even a thing,” Bacal said.

Britt’s roommate, freshman Wills DeGrandpre, said the music style doesn’t fit into a specific genre but rather bleeds between many, with rock and jazz influences found in the chord progressions. DeGrandpre said every song on the album is so different and when paired with Britt’s unique sound, makes for an amazing listening experience that takes the listener along for a story.

Britt’s album isn’t just an adventure for listeners. Britt said the creation of “Room 135” was an experience he’ll remember forever. The album had been turning over in Britt’s mind for a while, but getting a fresh start at college was what pushed him to take the plunge into finally creating it.

“In high school, [music] was a little thing I kept to myself,” Britt said. “No one really knew I played anything even though I was always writing. When I came to college, it was like, OK, no one knows me here. This is going to be me, I’m going to be the kid who always plays music and so, I kind of just went for it.”

Bacal said it was no surprise Britt made “Room 135.” He said that ever since he’s known Britt, he always had a guitar and because of Britt’s drive, creating an album seemed so natural for him. The two started playing music together in high school and Bacal said Britt always had a fascination in making his own album someday.

“Marius is hardworking when he’s passionate about something and his music is definitely at the top of that list,” Bacal said. “I always knew Marius had something special, especially when he wrote some of his first originals like “Going Nowhere.” When we started practicing it, I couldn’t believe how mature it sounded. It didn’t sound cheesy or anything like it, it sounded like Marius.”

The maturity in the music might be derived from Britt being raw and honest while writing his songs. Britt said he often writes in moments when social situations eat away at his mind. Oftentimes, he uses songwriting as a mechanism to cope with stress or discomfort. Britt said writing is usually for himself and producing is more akin to busy work, although he loves the entire process more than anything.

DeGrandpre said even with Britt’s musical skill, it is very difficult to singlehandedly create an entire album.

“There’s so much more work than people realize, and a lot of people have full recording studios and unlimited instruments,” DeGrandpre said. “He does every single part of it on his own. That’s the most impressive thing to me, just how diverse his talents are.”

Bacal agreed that creating an album alone without professional equipment is quite the feat. He said that while some elements of Britt’s album could have been better, the final product was as good as it likely could’ve been for having been created in his dorm room.

“What Marius completed was an absolute touchdown, especially for a debut album,” Bacal said. “He knows exactly what he wants and executed it perfectly, and I couldn’t be more proud of him.”

Whether his ideas come to him piece by piece or all at once, Britt said writing his songs, recording himself play and fitting everything together can be a tedious task. Britt’s production of “Room 135” ultimately took much of his time away from other aspects of his life.

“My social life definitely has been a little bit of a struggle last semester,” Britt said. “I was absent for probably two months last semester and this semester, everyone would say, ‘you’re talking way more than normal,’ ‘we see you all the time now.’ I’m done, so now I have time.”

While it might have been difficult for Britt to balance his social life while composing his album, DeGrandpre said Britt maintains great relationships with his friends and family. He said Britt also managed to make lots of friends who are into music as much as he is, and thus created a large support system.

Britt said all the social challenges and hard work was well worth the end result, especially because making music is what he loves most in the world. He said he knows music is what he wants to do with his life.

“I don’t want to be like, ‘Mom, I’m going to be a rockstar one day,’” Britt said. “Music definitely is what takes precedence over all the other stuff in my life. I enjoy it, which is great because it never feels like a burden or anything.”

Music is something Bacal said Britt could pursue as a career and making “Room 135” was a huge step for Britt’s career as an artist.

DeGrandpre agreed that Britt is making moves toward his goals as an artist. He said because Britt has the right motivations, he would make a better professional musician than many who also dream of making music for a living.

“His album could blow up and he could make tons of money from it,” DeGrandpre said. “Even if he didn’t, that’s not why he’s playing the music. You can tell he’s pouring his heart and soul into it. He’s not just doing it because he wants to become famous or something crazy like that. He really enjoyed the whole process.”

“Room 135” was released Feb. 21 and since, Britt said he’s received so much positive feedback not only from his family and friends, but even from people he doesn’t know. He said he’s so happy to hear people are enjoying what he worked so hard on.

DeGrandpre said that Britt hasn’t received much negative feedback so far, but if and when it does come, it will likely not impact Britt’s morale because he has been drowned in such positive responses already.

Britt said with how fantastic his experience has been already, he is excitedly working toward creating his second album. “Room 135” can be found on major streaming platforms and is available for purchase on iTunes.