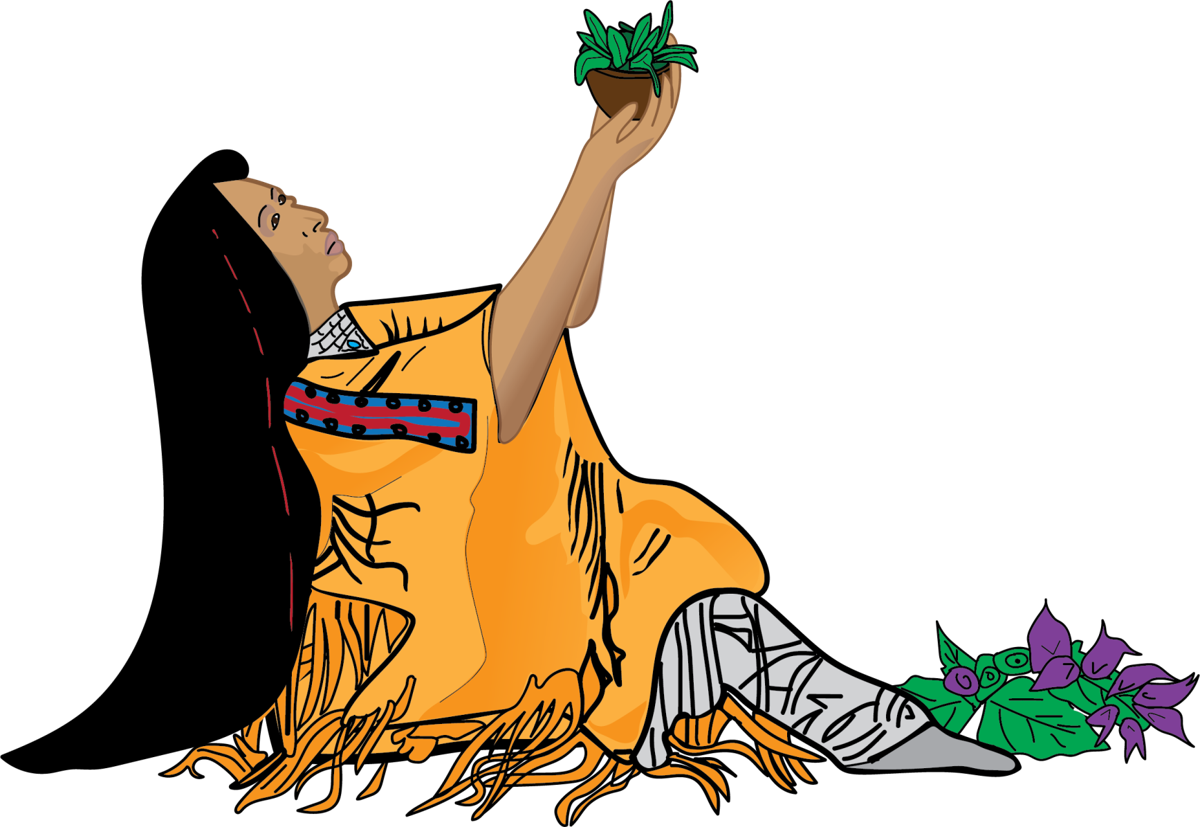 Along time ago all the people of the world walked on the same path known as “Sa’ah Naagháí Bik’eh Hózhóón” or the cosmic road. This included the holy people, the spirit people, the plant people, the four-legged people, the people that lived in the water, the people that flew and the two-legged people. On this road, there was only “Hozho,” happiness, beauty and harmony. One wasn’t superior to the other. This is the story of how the plant people became the foundation of life as told by Lorenzo Max, Navajo traditional elder and cultural adviser for NAU’s Applied Indigenous Studies department and Native American Cultural Center.

One day, the world gradually changed and simple life soon became harsh orders. All the people traveled on this road until they started to try to control and dominate one another. When they started to wander off the cosmic road, they came up with ways to hurt one another. One group would create some evil ailment or disease to inflict upon another group, and other groups would retaliate. Spiritual warfare had begun.

This story as told by Max explained a major part of Native Americans’ relationship with plants.

“We don’t just call them plants, we call them people,” Max said. “They’re just like us. They’re important to us because if we follow the cosmic order of life as they do, then life would be great. We would live a long, happy life.”

The plant people are idolized in the highest regard in Native American teachings, as they are the purest forms of life due to never veering off the cosmic path. Max said the cosmic path reflects the “Hozho” of the individual to its tribe, nature and the universe.

A traditional elder is a vessel of cultural knowledge. Elders like Max relay songs that come from ancestral lineage. Some songs include, but are not limited to, aspects of nature such as the mountains, the thunder and the plant people. Each aspect has a male and female counterpart to induce balance in the universe.

Knowledge of a culture is shared among Native Americans through storytelling. Senior Thalius Belinti of the Navajo Nation grew up learning about her culture through narratives.

“Most of the knowledge that I know was taught to me by my parents and grandparents,” Belinti said. “My father is very traditional and often participates in various ceremonies. Plants, especially those with supposed medicinal properties, are important during ceremonies.”

Max said ceremonies are practiced as a way of bringing balance and harmony back to an individual’s relationship with nature. While ceremonies can be about the wind, the mountain or any part of nature, in the end, everything goes back to the plant people.

The practice of plants in ceremonies provides a medium for Native Americans to pray. Pollen is used for praying as it is the one substance in common among all plant people. Belinti said the prayers that are recited when the cedar burns carry wishes to their ancestors in the sky.

“We grow coyote tobacco at the museum and have received several requests from the Hopi to collect it to be used in their ceremonies,” Phillips said. “We have also received requests to gather Arroyo willow boughs, which also grows in the museum gardens.”

Max said the spiritual energy from the plant people provides unique healing properties. This spiritual energy is known as “Baa’ aa’h leel,’ Bee’ Des Lah’” and is present in all people. How the energy is used is dependent on the individual and dictates the choice to do harm or heal.

“Whenever I felt stuffy and was unable to breathe properly, my parents would encourage me to place my head over a pan of sagebrush and water,” Belinti said. “They would then add in a red hot rock from the outside stove and the mixture would immediately start steaming. I’d then cover my head with several towels to contain all the steam.”

Nikki Cooley of the Diné Nation and co-manager of the Institute for Tribal Environmental Professionals said that plants are family. They view plants as relatives that heal, soothe, comfort and accompany individuals on their journey. Plants have always been viewed as relatives and not objects to treat carelessly.

Medicinal plants are an integral part of Native American culture. The connection between nature and the individual is a mutual relationship. Cooley said they believe to take from the Earth means to give back to the Earth.

“The larger university community, especially students, need to be aware of how important plants are,” Cooley said. “They are not objects to use and discard but rather respect by taking the time to understand, respect and ensure the longevity for future generations to learn about.”

Max said with climate change being more prominent, the ability to find such plants for ceremonies is more difficult than ever. Max had been searching for a specific plant on the mountains that used to grow in large patches years ago but said he was only able to find one this year.

Confronting this challenge has made preserving Native American culture more difficult. Cooley said that plants deserve the utmost respect. Actions such as not stomping on plants, over-harvesting and writing on trees can help to preserve plants.

“Knowledge of plants and their uses is becoming lost,” Phillips said. “Traditional knowledge is not being passed down, so now people are no longer able to identify the common trees, grasses and flowers that grow in their neighborhood.”

Max said that everything revolves around the plant people in every ceremony, so much so that at the end of every song or prayer all things tie to the center of the cornfield, the main stalk of life.

“Plants represent resilience despite the past and current repetitive efforts to assimilate and whitewash the Native American culture,” Cooley said. “Plants have provided hope, which has long been a symbol of prosperity and love.”