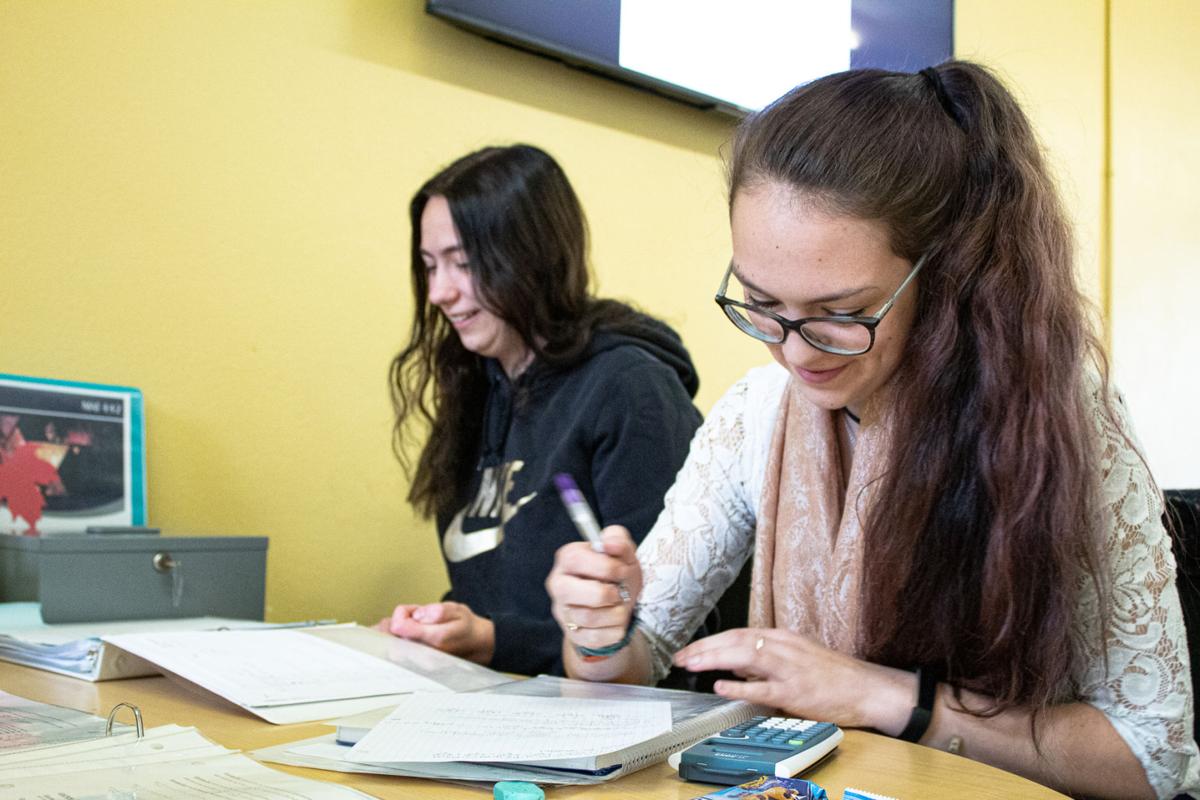 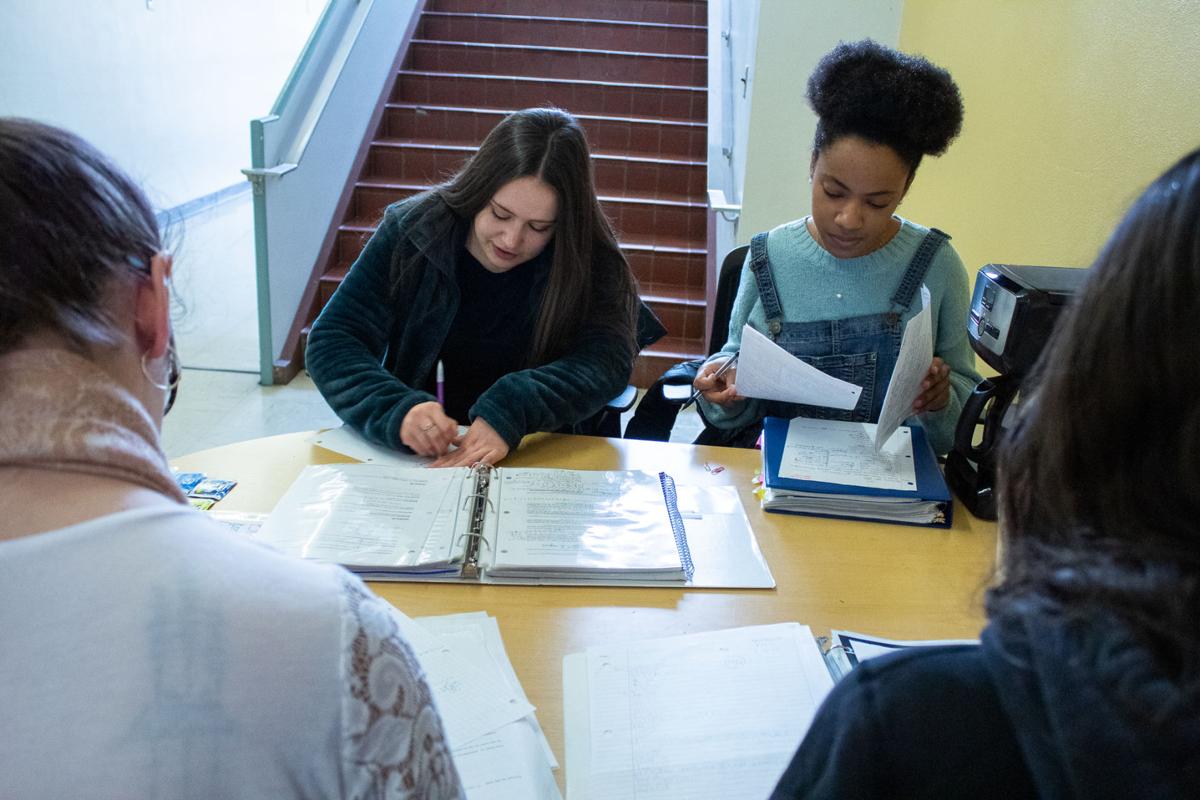 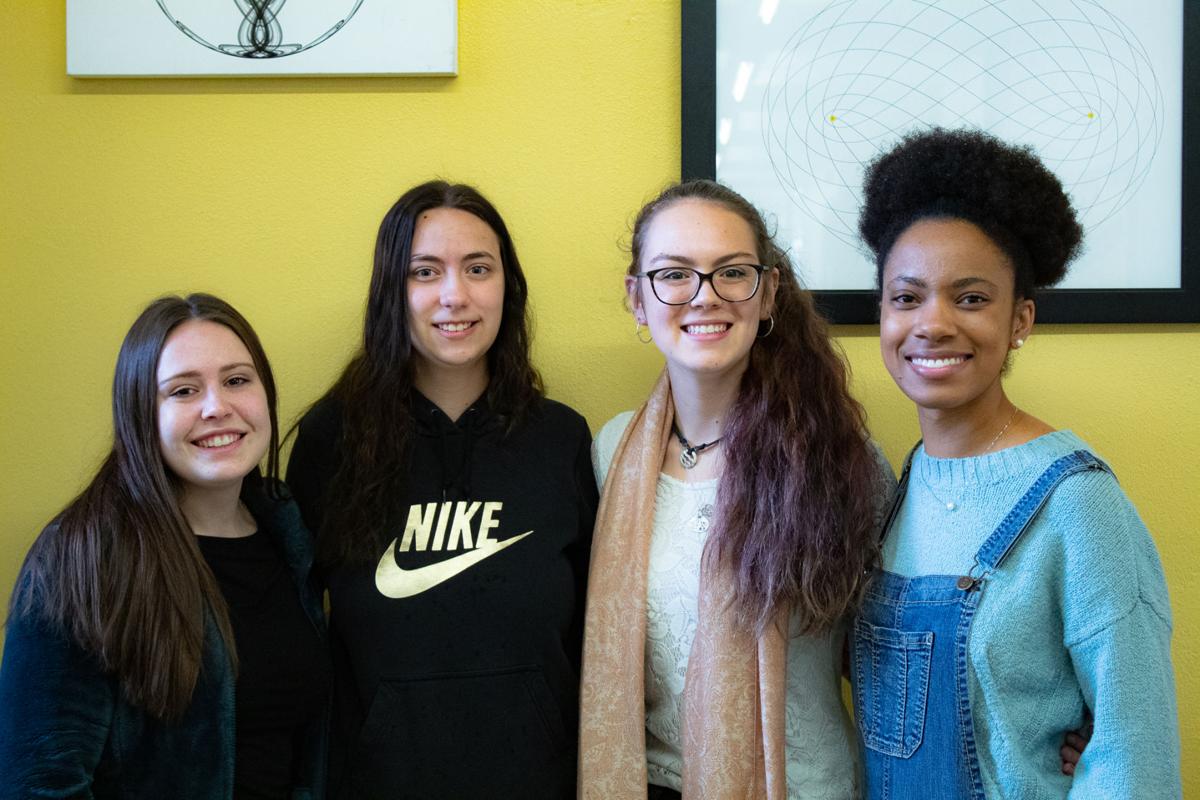 Kameron Filardi, Alea Lwanga, Chole Frechette and Kara Jones (from left to right) are all studying to excel in the male-dominated mathematics field. Friday, March 13. 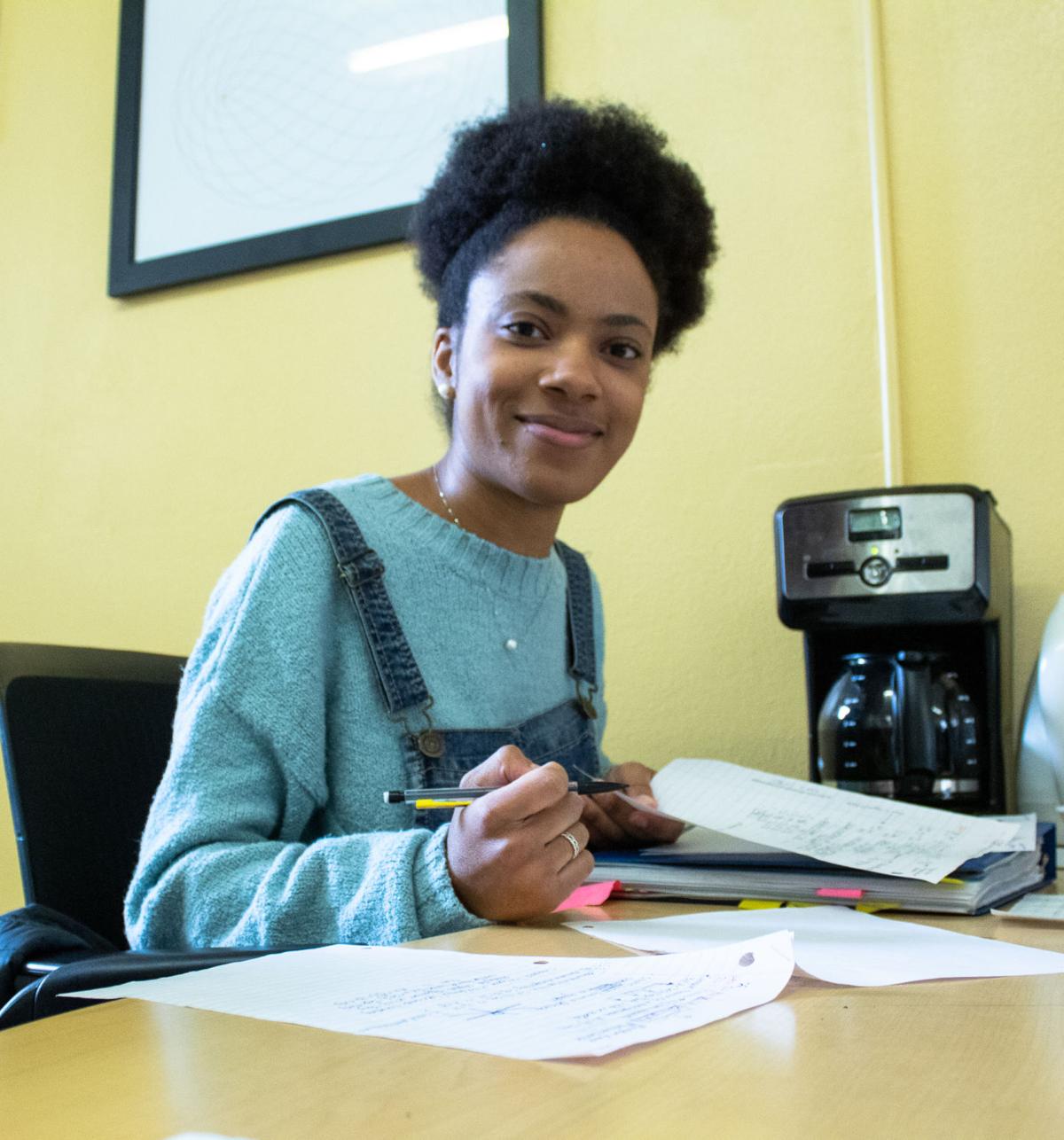 Kameron Filardi, Alea Lwanga, Chole Frechette and Kara Jones (from left to right) are all studying to excel in the male-dominated mathematics field. Friday, March 13.

Margaret Cozzens is now one of the most esteemed mathematics professors at Rutgers University, but she overcame many obstacles to get where she is now. In graduate school, she was dating a man who was also in the math field. She had to put hers on hold because she got pregnant, and she waited while he completed his master’s and doctorate degrees. Then she finally went back. Eventually, she pushed through her doctorate program and is now a recognized scholar of mathematics.

Cozzens was a guest speaker at The Nebraska Conference for Undergraduate Women in Mathematics held Jan. 31 to Feb. 2 where sophomore Chloe Frechette was the only NAU student to attend.

NCUWM celebrated undergraduate women in pursuit of continuing their education at the graduate level and seeking mathematical careers. There, Frechette presented her research from her internship project called Sylver Coinage, a math game that utilizes digraphs to depict a game in a picture. She said the conference was a prideful experience.

“I felt empowered that it was an all-women’s conference because not only were all the undergraduates attending women, the faculty and speakers that attended were as well,” Frechette said. “It showed that yes, I am a girl and I can do this.”

The idea of an all-women’s math conference brings to light what it means to be a woman in a male-dominated field. Frechette’s internship mentor Jeff Rushall, principal lecturer in the Department of Mathematics and Statistics at NAU, said this gender imbalance is in some cases historical, cultural and systemic.

“There are old school men all over the math profession who still believe that a woman's place is in the home,” Rushall said. “They won't say it out loud anymore, but that's what they think. They don't actively try to recruit or promote women in mathematics at all.”

Rushall said female students have to work harder to get noticed or appreciated. He said they don’t fake and rely on their ego as much as their male counterparts. Because of this that, he said, female students, in general, tend to have higher averages on exams and higher overall grades in classes.

Senior Kameron Filardi, a math and math education dual major, said she noticed in her courses that those who speak up the most are men. Her capstone class consists of 14 students, only four of whom are women.

“It depends on what level of math class it is because the higher you are in math, the fewer females you're going to see,” Filardi said.

The majority of students in advanced math classes are male, and Filardi said she sometimes feels uncomfortable answering a math problem she knows the answer due to feeling outnumbered.

Filardi and her classmate, senior Kara Jones, who is also a math tutor and is in the same area of study, explained when it comes to discussions in class, men tend to dominate the conversations. Jones said it can feel as though their male classmates feel the need to explain math to their female peers.

“I felt a lot of pressure to always know what I was doing particularly because I was female,” Jones said.

In regard to her area of study, Filardi said people are surprised to find she studies math. She said that many people expect her to teach elementary or junior high math, as it has often been depicted as the norm when in reality she wants to pursue a career in secondary education.

Filardi said there are women she has learned about in her math history class. She said that as a woman studying mathematics, it’s difficult to find someone in history to identify with.

“I think it would be helpful if our female professors talked a little bit more about it,” Filardi said. “We've had it mentioned a couple of times about being a woman and being in math but not to the extent of where I feel like I can be supported.”

Ye Chen, who has a doctorate in mathematics, is an assistant professor in the Department of Mathematics and Statistics and teaches higher-level math like linear algebra. She said there is a gender disparity in the field of mathematics as 15% of tenure-track positions are held by women. However, she said women are just as competitive as men in the field and should be treated equally.

“Feeling bad for women doesn't fix the problem,” Frechette said. “It's the support, the encouragement, and the tools that they need to advance themselves and be seen as someone that can do what a male can do. Women need to be out there encouraging each other and standing up for each other.”

Issues of gender are of concern to Jones, as it highlights the lack of recognition females and gender-fluid individuals receive. The challenge now is to make an environment that provides equal opportunity for everyone.

Junior Alea Lwanga, a math tutor and math education major, said she has to prove herself to others by competing with her classmates. Lwanga said she is trying to stop comparing herself to others and competing since it is unhealthy. Chen agreed that as a woman in math, it is best to focus on one's individual ambitions.

“To be a successful female mathematician, I think the most important thing is to have a clear and determined goal as early as possible,” Chen said. “There will be many challenges along the way, especially pregnancy and child care.”

Gender equality for Jones means being provided the same, or similar, opportunities as her male counterparts. Jones said women can achieve great levels of success, however, many don’t receive the same opportunities offered to men.

Rushall said a reason why the mathematics field is male-dominated is that some men feel threatened by a woman being as good, or better, than them at something, resulting in women feeling intimidated about the situation.

“It's like a cycle that can't really be broken, but it is slowly being broken one hire at a time and one retirement at a time," Rushall said. "Slowly things are leveling out but it's going to take time.”

As an educator, husband and father of three daughters, Rushall said it is important to include more women in the picture. He encourages female students who have talent to pursue undergraduate research projects whenever possible. For Rushall, showing female students opportunities will make them realize there are many avenues they can take.

Both Rushall and Chen explained that to make students feel equal in the classroom, they intentionally call on specific students to create a balanced environment.

Lwanga said that while the gender disparity is intimidating, her race is also something that makes her different than most people pursuing careers in math.

"I don't always see it as a gender thing," Lwanga said. "For me, it's also because I'm a different color. So, sometimes I just don't know which box to check. I just feel like there's stigma for everyone in different boxes."

As education has been accessible to men longer than it has been for women, Lwanga said the gender difference in the mathematics field is unsurprising. For her, empowerment means staying true to oneself despite the challenges ahead and to keep doors open.

Instead of placing limitations on what women can do, empowerment through tools and support can go a long way. Frechette said victimizing the situation won't be the solution to this rather complicated mathematics problem. When it comes to women in mathematics, the limit does not exist and the doors remain open for encouragement and opportunity.