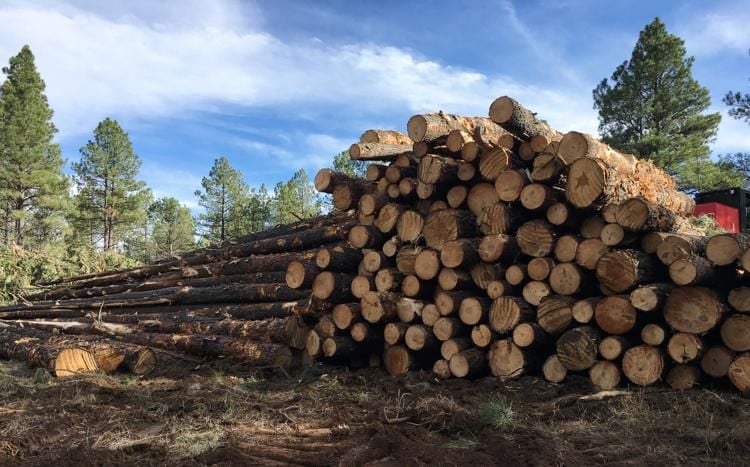 Stacked logs near Rio de Flag mark the area where forest is being cleared by the Flagstaff Watershed Protection Project, Oct. 28. 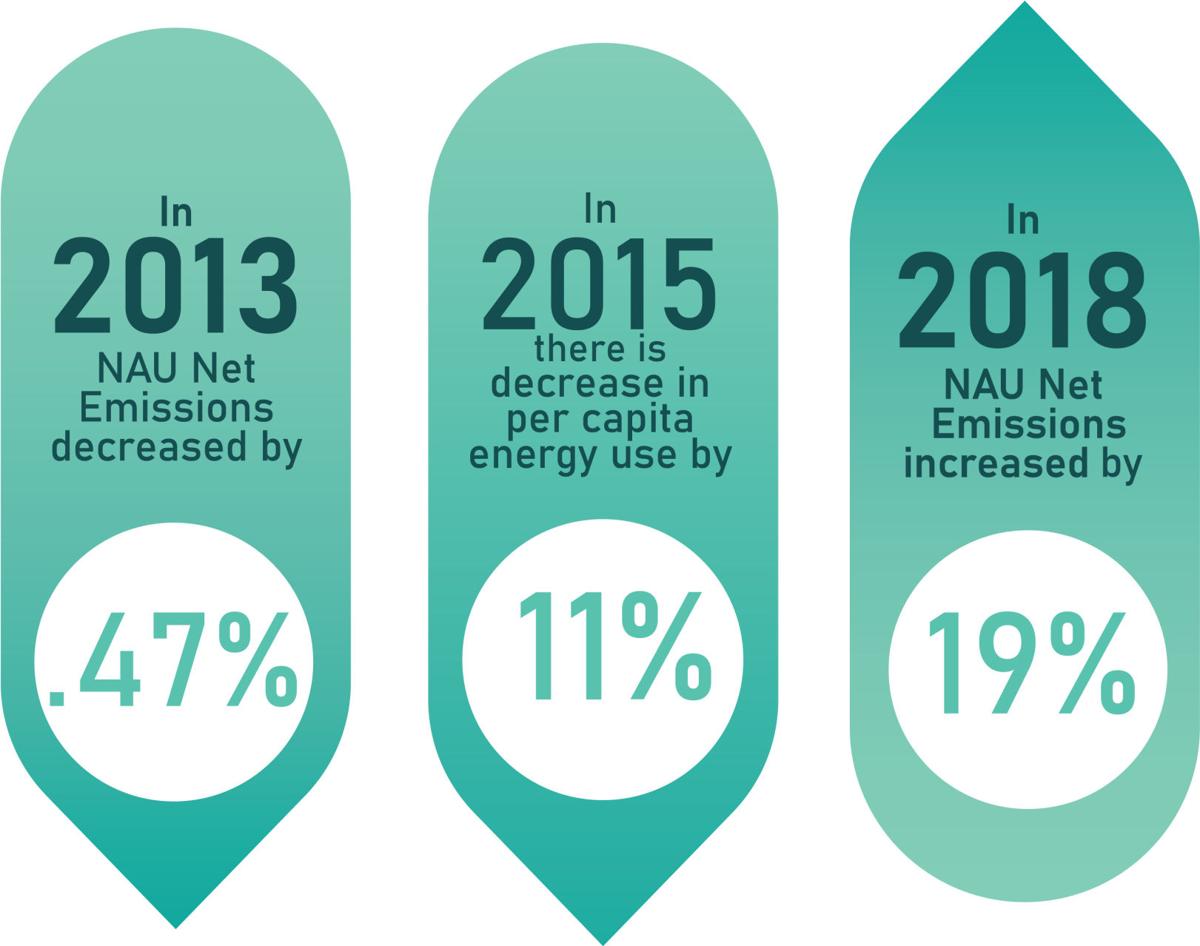 Stacked logs near Rio de Flag mark the area where forest is being cleared by the Flagstaff Watershed Protection Project, Oct. 28.

In 2010, NAU released an ambitious plan to render the university carbon neutral by the year 2020. However, data from 2018 shows that NAU’s net emissions have increased by 19% since 2007. In fall 2020, NAU’s Office of Sustainability is slated to release an updated climate action plan. It is unclear whether the new plan will be more successful than its predecessor.

The 2010 Climate Action Plan was a result of then-president, John Haeger, signing the American College & University Presidents' Climate Commitment (ACUPCC). The plan set forth aspirational steps and goals to reach carbon neutrality. The first mile marker was set for 2014, when the plan projected for NAU to return to emission levels of the year 2000. According to the timeline presented in the early pages of the plan, the first-ever emissions inventory for NAU was completed in 2006, so it is hard to say whether or not the plan succeeded in this goal, but according to the data available, net emissions were indeed down in 2013, if only by a marginal .47%.

In 2015, however, net emissions spiked. This was paired with the release of a new plan by the university. The new plan was dubbed the NAU Sustainability Action Plan and was split up into seven different documents, one for each of the seven sections listed under the original 2010 Climate Action Plan. The revision intended “to make even more detailed and specific actionable items,” according to the website dedicated to the plan. While The Energy and Climate Section did provide more specific steps it also made the timetable indefinite, “Goal: Reach Climate Neutrality by 20xx.” The revision also removed any explicit measures of success.

Since 2015, emissions have seemingly stabilized. This is seen as a promising sign by those at the Office of Sustainability.

"Even though we have doubled our enrollment since 2010, essentially we've been able to hold our emissions since then," Matthew Muchna, sustainability manager at the Office of Sustainability, said.

This encouragement is based on the fact that the steady emissions levels, when paired with rising attendance figures, show that energy use per capita has gone down by approximately 11%. However, figures provided after 2015 fail to take into account carbon emitted by factors beyond the borders of NAU.

Muchna called such factors "scope three emissions" and noted the inherent difficulty in tracking them. Scope three factors, according to the Second Nature report which details NAU emissions, are broken into categories: waste generated in operations, fuel and energy related to activities, purchasing goods and services and commuting and air travel. The only year that three of these five categories were tracked was 2015. The sudden attempt to track scope three emissions was in response to the spike that occurred. The subsequent decision to stop tracking scope three emissions accounts for the purported stabilization of emissions afterward.

Muchna hopes that with the advancement of the Climate Action Plan, the Office of Sustainability will come up with better means to accurately measure the impact of scope three emissions. Muchna said the Office of Sustainability has been working in close relation with the city of Flagstaff in order to expand and integrate the actions taken by both of their respective Climate Action Plans.

Not all are optimistic about the current framework for the Climate Action Plan. Brian Petersen, director of the Sustainable Communities Program, cited the near universal failure of large institutions and even nation-states to hit goals set by similar climate action plans. Potentially, Petersen said, this failure comes from other interests within these institutions that are diametrically opposed to the reduction of climate change.

“If we wanted to really achieve sustainability, we would have to make it the top priority,” Petersen said.

This unanimous embrace of sustainable best practices is directly at odds with the proclivity for growth embraced by university leadership, evidenced by the building of four massive new structures in the last five years. All four structures are Lead in Energy and Environmental Design (LEED) certified, a designation bestowed based upon the relative resource efficiency of the construction and operation of the building. This has been a point of pride for many within the university since the onset of the ACUPCC agreement in 2007. However, many who study sustainability are concerned that the construction of any new building, no matter the credentials, is over-burdensome on global ecology.

These critics, including Petersen and NAU Environmental Caucus Chair Erik Nielsen, often cite the failure of organizations such as the U.S. Green Building Council, the accrediting organization behind LEED, to account for the embodied energy demands that accompany any construction project. Embodied energy is a term that aims to take into account all the impacts of producing materials that go into a building, from the energy spent milling lumber to the human capital spent in mines across the globe and the energy consumed by material’s various means of transportation. Taking these factors into account drastically increases the ecological impact of every construction project.

Nielsen disagreed with the idea of new construction.

“We have to stop making the problem worse," Nielsen said. "Building new buildings is likely to add to the problem.”

Off-campus buildings that are directly correlated to NAU further expands the true ecological impact of the school. Less than half of NAU’s students live on campus. Some brave the hyper-competitive market for locally owned rental properties, but many other students rely on off-campus student housing structures, none of which are LEED certified. There is nothing within Flagstaff’s Climate Action and Adaptation Plan that addresses the connection between these structures and the standards lauded by NAU.

In a survey conducted by the Office of Sustainability, 89% of those surveyed claimed that NAU being a leader in sustainability was either very important or extremely important. That number rises to a near unanimous 97% when accounting for those who responded moderately important. Perhaps just as telling of a figure is, of the 240 asked what qualities they would like to see in a climate action plan, 112 answered a demonstration of accountability. This plan, and the adherence to it, represents an opportunity for the university to demonstrate that accountability. Only time will tell if it will succeed.