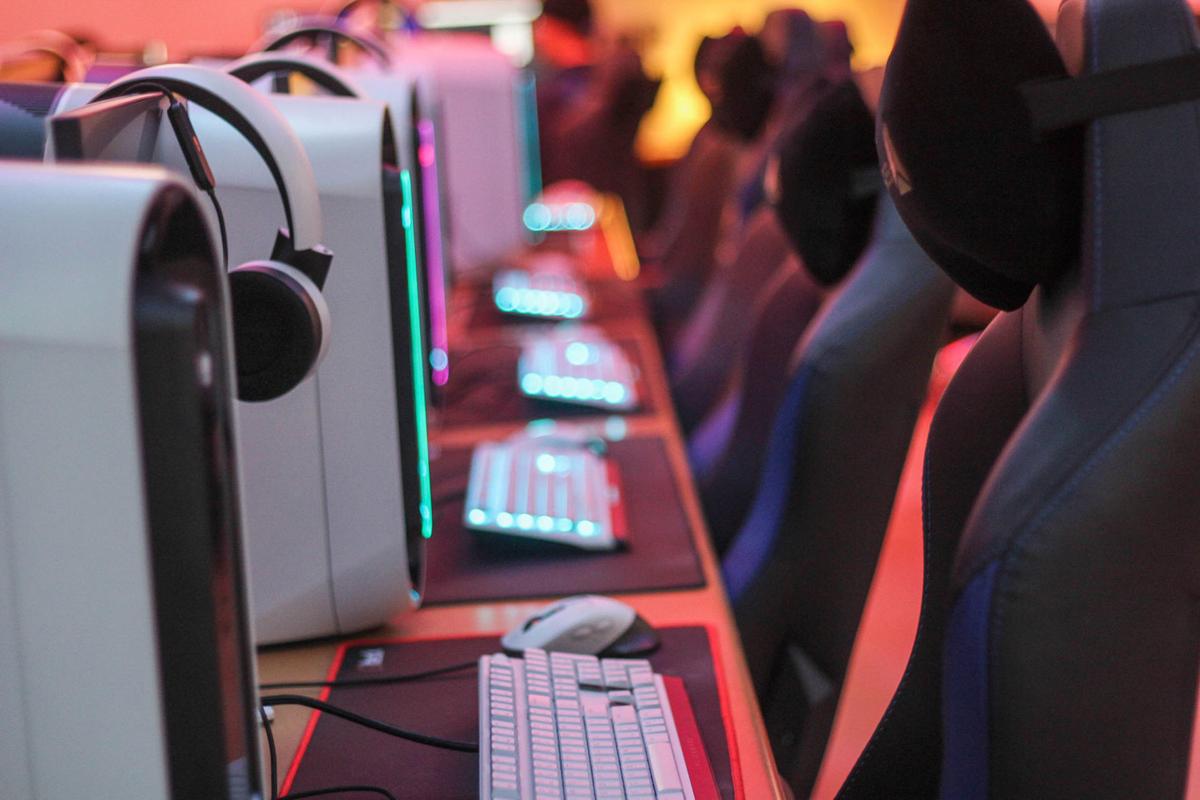 Through the Advanced Media Lab, the School of Communication faculty is eager to achieve technological innovation and breakthroughs. It also serves as a laboratory for VR-related research, March 6. 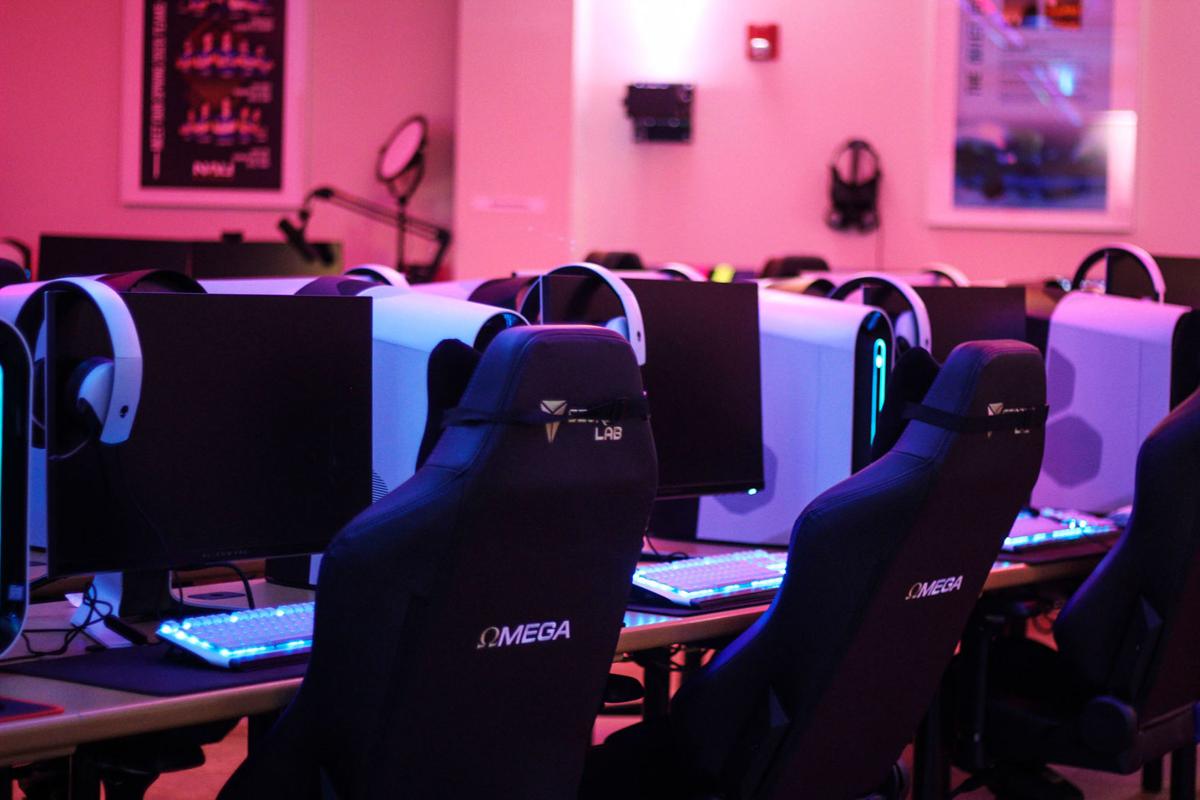 The Advanced Media Lab is located in the Communication building room 112, March 6.

Through the Advanced Media Lab, the School of Communication faculty is eager to achieve technological innovation and breakthroughs. It also serves as a laboratory for VR-related research, March 6.

The Advanced Media Lab is located in the Communication building room 112, March 6.

For the last five years, a windowed door projecting hues of colorful LEDs provided a glimpse into the vast possibilities of incorporating virtual reality (VR) into campus curriculum. Hidden within was nothing more than a “storage closet” repurposed in 2015 to house six VR capable computers. Unlike the limited space, the aspirations of lab managers Norm Medoff, professor of communication, and Giovanni Castillo, lecturer of communication, was boundless.

Castillo and Medoff had a vision. Piggybacking on the recent surge of technological advances in virtual reality, the pair wanted to establish a VR lab within the School of Communication. If all were to go according to plan, this lab would eventually provide programs across campus the opportunity to incorporate technology-assisted communication into learning, research and extracurricular activities.

This semester, the Advanced Media Lab (AML), previously called the NAU Virtual Reality Lab, relocated to a 2,000-square-foot space in the Communication building. President Rita Cheng cut a ribbon signaling the official opening of the lab Feb. 25, with Castillo, Medoff and six Dell Computer sponsors by her side.

“Students have the opportunity to access high powered computers that are sitting here during the day, not necessarily being assigned to anybody for use,” Medoff said. “So, it’s a little bit like an open lab in that regard. Students from all parts of the school can come in here and use it.”

The move follows a partnership between the AML and the NAU eSports club. The idea to incorporate esports came from NAU Chief Information Officer Steven Burrell, who agreed to provide funding for the AML contingent on successfully creating a space for the athletes to game.

Harkening back to the program’s days in the storage closet, the VR lab drew intrigue from students, faculty and administration alike, but the process of acquiring support was slow.

Castillo described his persistent efforts to acquire support from the university.

“I basically bugged [NAU] for about five years consistently until they started to listen to me,” Castillo said. “It’s not like it happened overnight.”

The AML simultaneously looked for funding from both the university and through outside grants. Castillo was cobbling money together from a variety of different sources, including funding from Diane Stearns, provost and vice president for Academic Affairs. Stearns offered Castillo around $25,000 to get the lab running.

Castillo described Stearns as one of his mentors and credits her for assisting in the grant application process. Castillo applied for over $8 million from various funds but initially found little success. He recalled rejected grants from the National Science Foundation (NSF), specifically.

“One grant that I applied to every year is called the National Science Foundation ISO grant,” Castillo said. “We were applying for $1 to $2 million dollars of funding for creating learning innovations with technology.”

The increase in space and funding allowed the AML to expand its focus beyond VR. The lab houses a variety of technology-based projects, including drone cinematography, grant-funded research, esports, shoutcasting and motion capture.

The NAU eSports club consists of about 200 students competing across five different games, according to NAU News. Castillo worked closely with the club’s athletes to ensure that the hardware selected for the lab is up to par with the industry standards for professional gamers. After compiling a list of specs, the AML enlisted the help of Dell Computers.

“We met with Dell representatives and I showed them my technology concept for the lab, which is really far beyond what we have here. They bought into it and they helped us specify everything hardware-wise for the lab,” Castillo said. “So, it was pretty easy in this way — we didn’t need any extensive consultant work for [the lab] because it’s pretty much plug-and -play stuff.”

After being pressured by students to partake in playing video games himself, Castillo set up an account on the popular game developer Blizzard’s platform. Although he said he enjoyed playing the games, what he enjoyed most was experiencing the game engines used to develop the individual gaming experiences. Castillo said a large portion of the work done in the AML, including research and learning projects, utilizes similar game engines.

A shoutcasting booth was also designed and implemented by Castillo to support the NAU eSports teams. Shoutcasting is akin to sports broadcasting but for video games. Unlike traditional sports broadcasts that are hosted by TV networks, esports coverage is generally consumed online through livestreaming websites, like Twitch. In the booth, student shoutcasters are equipped to commentate and broadcast video game matches.

One goal frequently discussed in the AML is to amass a large following through online streaming platforms. This could benefit the program in a variety of ways, including personal donations from fans, advertising partnerships with the streaming websites and sponsorships from computer hardware companies. Castillo said the NAU eSports club is looking into sponsorship opportunities with hardware manufacturers, like Dell.

Castillo views livestreaming as the future of media.

“Streaming is kind of like a cultural deal. [Young people] create community, they communicate with each other. They play games, watch each other and communicate online,” Castillo said. “It becomes a forum of sorts.”

Castillo said public relations students have benefited from having space on campus dedicated to this culture. New media opportunities, like creating specialized marketing videos for the esports team, allow students hands-on experiences in the media field. This semester, the AML is hosting two courses, CMF 251 and CMF 252, which will teach students about public relations, sports management and streamcasting for esports.

These workshop-style classes are closely related to the student media workshops offered by the Media Innovation Center (MIC) just across the hall. Currently, there are no specific plans to integrate MIC programs with the AML, however, Medoff said a partnership is not out of the question.

Castillo said while esports may be the entry point for students, learning is the primary objective. In addition to the work with the NSF and Lowell, the lab has assisted student academics, too.

ChemVR is a learning tool that has been employed in organic chemistry classes at NAU. According to the AML website, the program allows students the “ability to directly manipulate molecular structures in virtual space.”

In 2018, a study involving 65 students was conducted to evaluate how effectively people learn in virtual space. Department of Psychological Sciences professor Michelle Miller, doctorate in cognitive psychology, studied the inclusion of ChemVR in the organic chemistry curriculum. Two classes identically structured and taught by the same professor were compared as part of a between-subjects experimental design. The study found VR-assisted learning to positively benefit student letter grades and exam scores, especially for first-generation students.

Medoff said he is inspired by this type of research.

“Organic chemistry ignited my interest because it presented some testable hypotheses for us as researchers and also involve psychological science professors as well,” Medoff said.

It is difficult to pinpoint one specific academic goal in the AML. Instead, the lab seeks to expand the possibilities of communication through technology. Communication is broad, whether it’s simplifying the learning process for chemistry students or allowing public relations students an opportunity to represent a esports team on campus.

Many of the projects taking place in the AML are student-driven. Medoff and Castillo agree that the lab would not exist — at least not in its current capacity — if it was not for student initiative. The lab not only bridges the gap between different academic programs on campus but also blends learning and play for NAU students.

“At a certain point, the line between the two becomes indistinguishable,” Castillo said.