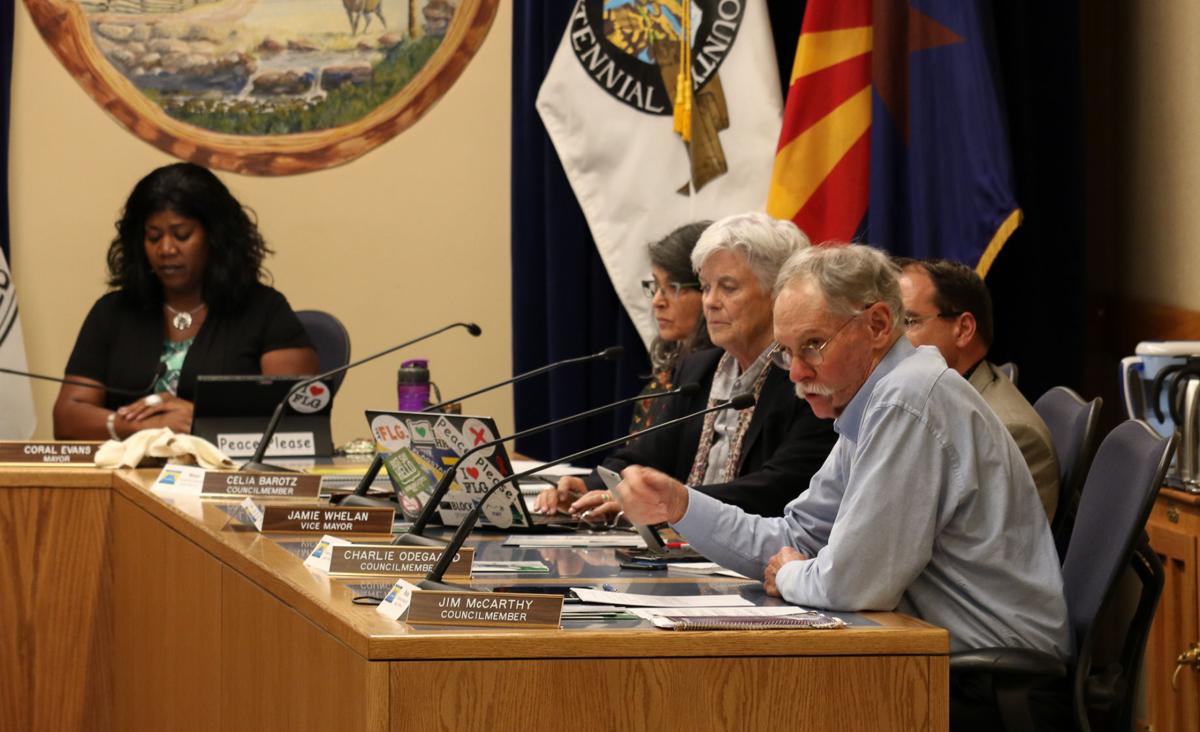 Councilmember Jim McCarthy joins the discussion during a city council meeting held in Flagstaff City Hall on Sept. 18, 2018. There were many items on the meeting’s agenda, including a continued discussion on affordable housing in Flagstaff. 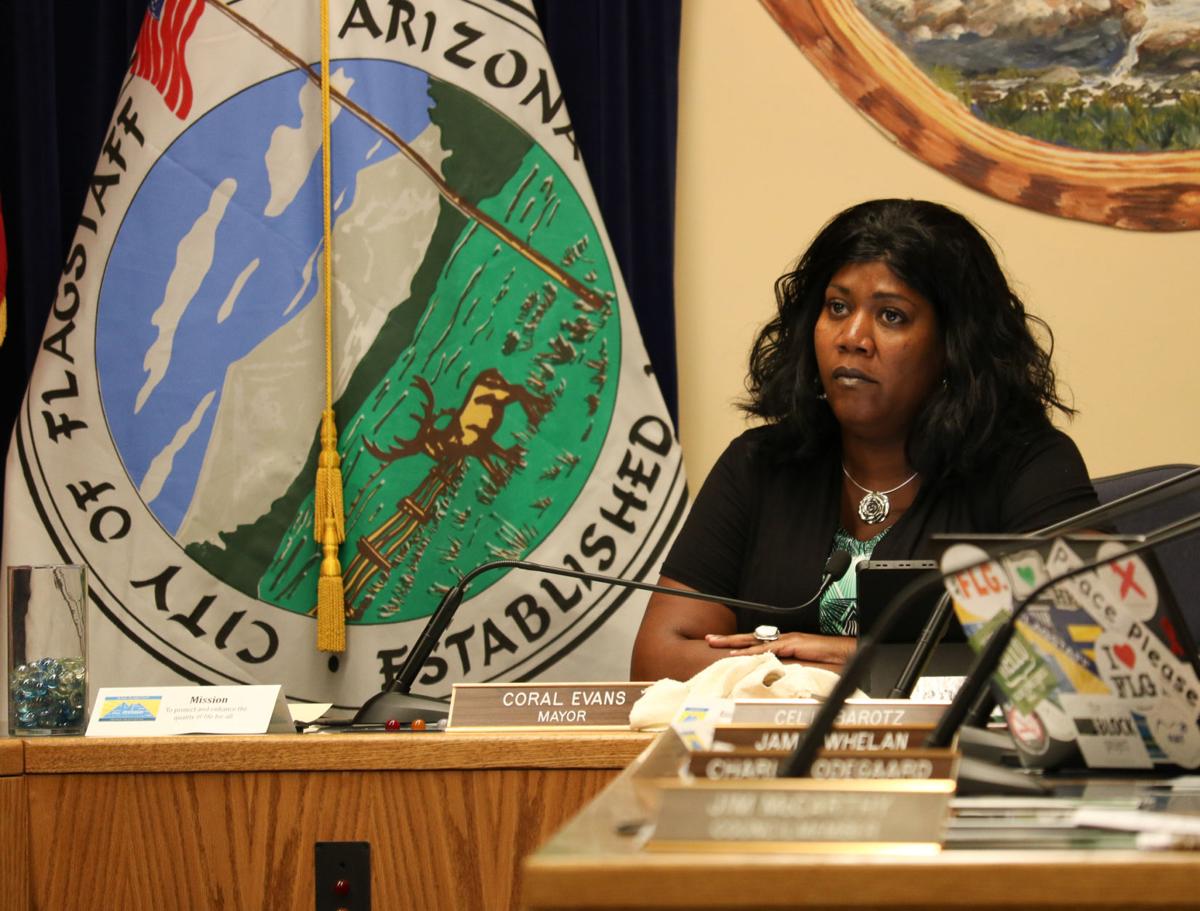 Mayor of the City of Flagstaff Coral Evans listening in during a typical city council meeting on Sept. 18, 2018. There were many items on the meeting’s agenda, including a continued discussion on affordable housing in Flagstaff.

Members of Flagstaff City Council gathered for a city council meeting on Sept. 18, 2018. There were many items on the meeting’s agenda, including a continued discussion on affordable housing in Flagstaff.

Councilmember Jim McCarthy joins the discussion during a city council meeting held in Flagstaff City Hall on Sept. 18, 2018. There were many items on the meeting’s agenda, including a continued discussion on affordable housing in Flagstaff.

Mayor of the City of Flagstaff Coral Evans listening in during a typical city council meeting on Sept. 18, 2018. There were many items on the meeting’s agenda, including a continued discussion on affordable housing in Flagstaff.

Members of Flagstaff City Council gathered for a city council meeting on Sept. 18, 2018. There were many items on the meeting’s agenda, including a continued discussion on affordable housing in Flagstaff.

With the recent growth of NAU and with Hub Flagstaff opening this year, affordable housing has once again become a prevalent concern for residents and politicians alike. Both are worried about where this growth will take Flagstaff and what the future of affordable housing will be.

Alex Martinez had his own ideas about how to fix the housing issue within Flagstaff.

Martinez argued that the blame should not be on students or NAU.

“I think they’re [those concerned with housing] just looking for someone to beat up on. The university is going to grow, if it wasn’t a quality institution we wouldn’t be growing,” said Martinez.

He stated the problem is parking, and that the city still looks at housing in a traditional sense, houses with two-car garages and yards. Instead, he believes the city needs to look into a new way to build to keep up with more people moving to Flagstaff.

“Our zoning ought to be able to allow it to put, if a lot is big enough and it qualifies under a certain code we could develop, to put another house behind it, like a discourse that would offer more housing for students or senior citizens. We have to be really creative,” Martinez said.

Austin Aslan agreed it was not the students at fault for the affordable housing issue. However, in his view, there was another factor at play in the issue that few people were talking about.

“I don’t blame the president [Rita Cheng], I think she’s actually a logical agent in all this, she’s doing what she’s been hired to do and she’s doing it very well,” said Aslan. “The problem lies with Arizona Board of Regents [ABOR] and the folks at the state level who are mandating that NAU grows at the rate it is as means of survival. And part of the problem with that is it’s not very sustainable.”

He explained ABOR and the people at the state level are not thinking of the possible future of education, as people are no longer going to a physical class and are taking everything online instead. Aslan was worried that many of the current student housing structures going up will become useless once education goes even more digital and even fewer people are living on campus.

Adam Shimoni had a different opinion of what problems were impacting Flagstaff’s housing issue and what needed to be changed. One big issue he sees is what he calls “inappropriate off-campus student housing,” something he has pushed against for about six years now.

He defined this kind of housing as buildings that rent by the room instead of by the unit, which he stated was a loophole being exploited by the developers to get around laws preventing them from only allowing students to lease. Renting by the room makes it impractical for nonstudents to live there.

A solution he saw was having the university create more on-campus housing.

“I’d like to see NAU take on more accountability for its growth,” said Shimoni. “I’m going to continue speaking up against NAU’s growth with a lack of a housing plan.”

Like other candidates, he didn’t find the students themselves at fault for the housing issues Flagstaff sees. Instead, he said the best Flagstaff could do was welcome them in and that the students become apart of the community, but the issue lies in ABOR.

“I don’t necessarily think Rita is going to be able to communicate our needs to ABOR when it goes against her bonus check,” Shimoni said.

Emphasizing that ABOR pushing Rita to keep growing is an issue and needs to be addressed, Shimoni stated he feels students are being placed in the midst of the issue and taking on the heat because of this.

“We need you guys [students] to engage locally and speak up locally and educate yourself locally and vote locally. Because your voice is needed at the table and is not being represented adequately by the student population,” Shimoni said.

Shimoni also believed that growing vertically was also a means to help fix the affordable housing issue in Flagstaff.

She stated that in the past 12 years, she has noticed that private developer built housing options have created issues for both Flagstaff locals and that they are changing the city.

Salas believed that NAU, Flagstaff residents and ABOR have to work together to keep Flagstaff the mountain town it is. Cooperation and working toward a better Flagstaff is key to helping fix the issue.

“This can be done by pursuing public-private partnerships, fostering synergy and cooperation among partners in the city’s growth including small business, local nonprofits, Coconino County and Northern Arizona University,” said Salas.

She emphasized that everyone is in Flagstaff for their own reasons, and whether they have lived here 20 or two years, working together is key.

Deasy said that Flagstaff not being able to keep up with the growth has lead to issues of homelessness and higher prices for housing. It’s an issue he viewed as a priority to tackle on city council.

“A big part of the problem is NAU, due to cutting of funds by the state, has had to make up for it by expanding enrollment and increasing tuition. I think it’s unfair to the students, it’s not good for the city, and it comes down to the fact that NAU’s trying to survive like the rest of us and the state legislator and the governor have been making it a lot worse,” said Deasy

Dennis Lavin has different ideas, as he runs for city council on what housing and growth mean to Flagstaff.

Lavin stated that having visited here since 1977 and finally moving 1997, the prices in Flagstaff has always been an issue.

He complimented NAU's efforts to house students, stating that it is one of the best in the country. One issue he saw though was a lack of communication between the university and Flagstaff.

"The citizens in town feel they don't have a voice in the off-campus housing, so we have to enhance our communication with the community — both the city and the NAU folks," said Lavin.

One solution he suggests is growing out towards Highway 40.

Lavin believed that building out there would result in cheaper land and would allow for part of the housing issues to be addressed.

In terms of off-campus housing, Lavin doesn't have an opinion on renting by the room and not the unit and other off-campus issues. Instead, his issues are with what will happen to these building in the future and safety.

"My concern is more strategic — what happens in 10-15 years if students decide to telecommute or the international students who, because of economic reasons, decide not to come here in the future," Lavin said.

He also expressed hope that new student housing would be built on campus and even proposed an idea where the university could help contribute to the town.

To achieve this, Lavin's idea involves imposing an "impact fee" included with students' tuition at NAU. Revenue would be used by the city to help fix roads, fund state departments and other projects helping save taxpayer money.

His largest concern still was communicating with one another and NAU working together with Flagstaff to include residents with NAU's plans for future growth.