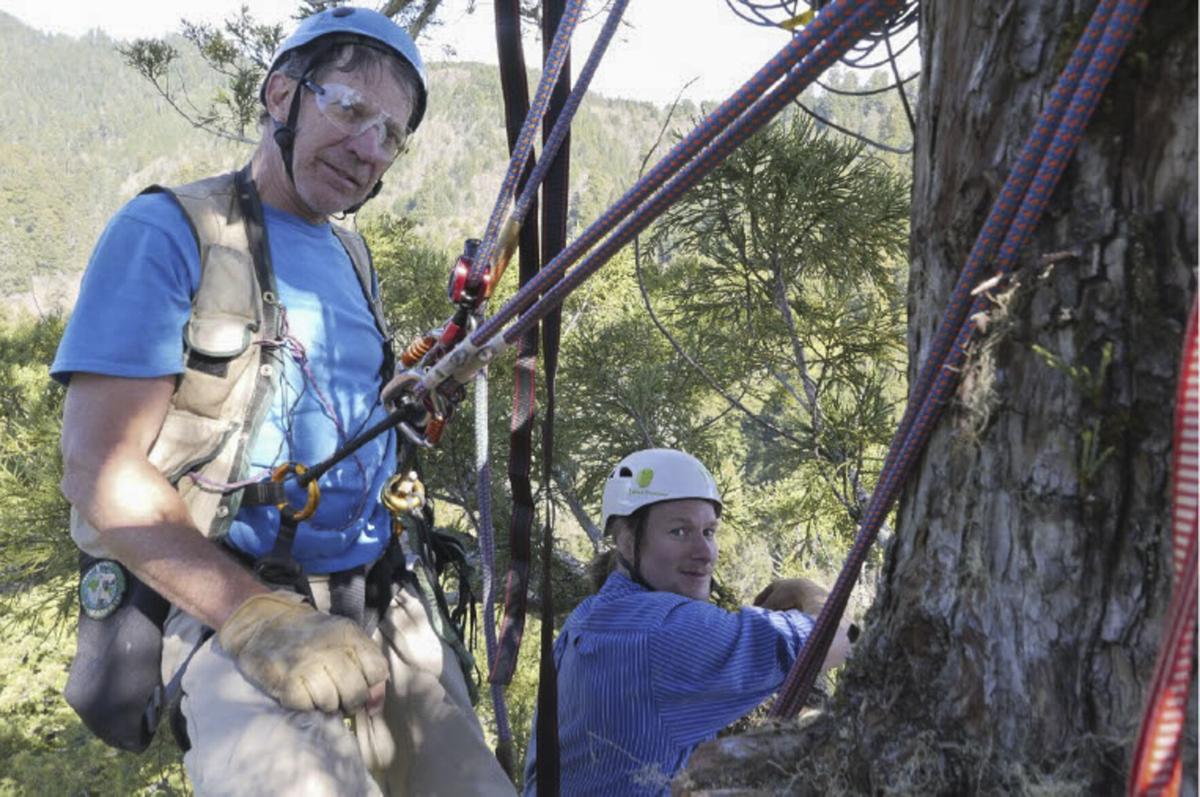 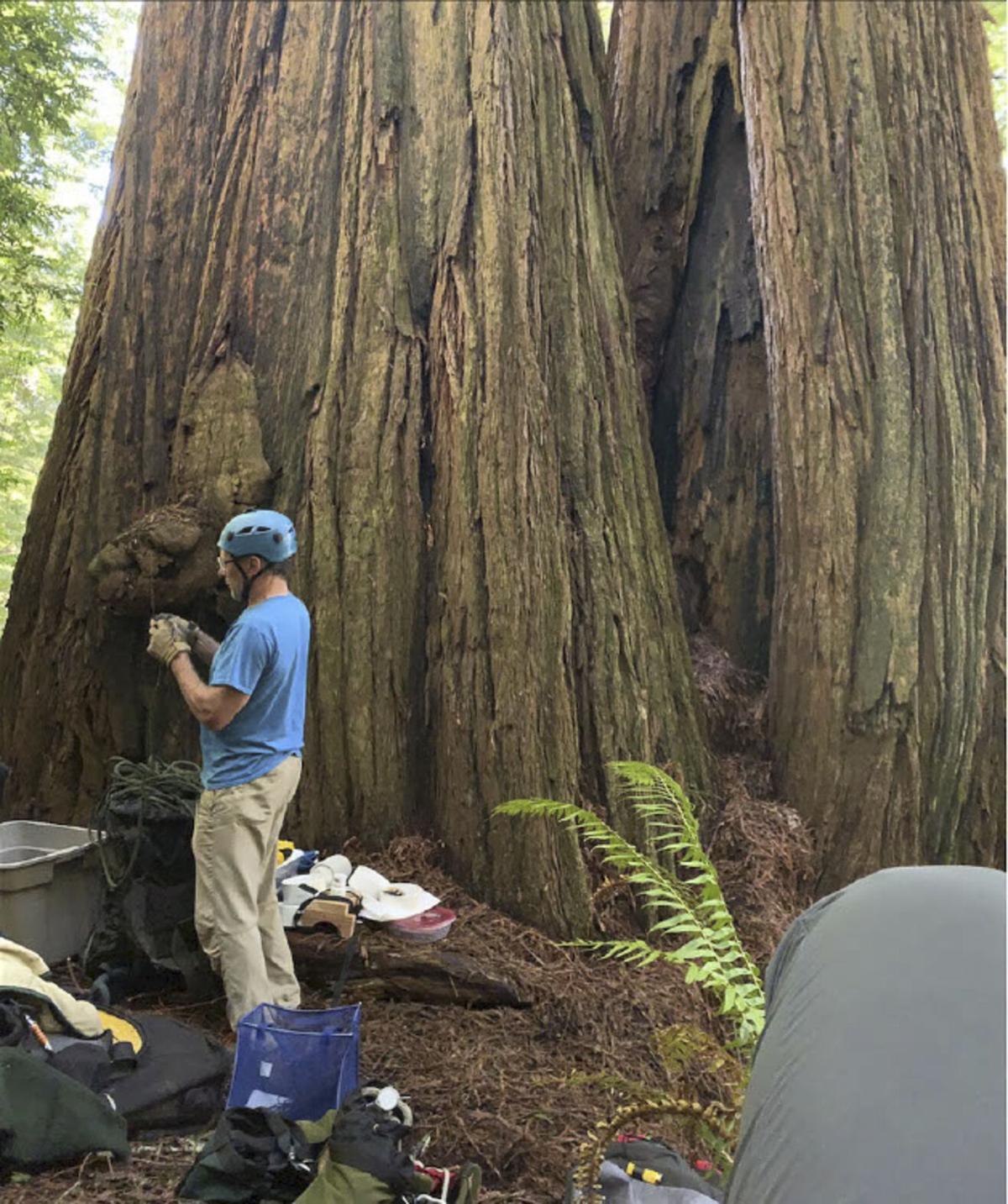 Co-author and postdoctoral researcher George Koch shown on a research trip to the redwoods March 2020. (Photo courtesy of Andrew Richardson)

Co-author and postdoctoral researcher George Koch shown on a research trip to the redwoods March 2020. (Photo courtesy of Andrew Richardson)

A recent study shows that planet Earth may reach its temperature tipping point in the next 20 to 30 years. An international team including NAU researchers found a steady decrease in plant carbon intake.

The plants’ ability to capture carbon in the atmosphere may decrease 50% within the next two decades as temperature rate increases, according to the new study in Science Advances by NAU researchers, Woodwell Climate Research Center and the University of Waikato. Science Advances is a media outlet that allows researchers and authors to have an open journal of new studies, according to its website.

During the photosynthesis process, plants take in carbon dioxide and water from the atmosphere, turning it into glucose for energy and oxygen for humans, according to National Geographic.

NAU postdoctoral scientist Katharyn Duffy and lead author of the study said many countries made an international climate agreement to work on reducing carbon dioxide emissions, according to the World Resources Institute(WRI). However, based on current research, Duffy said she thinks much more has to be done.

“What our study showed is that land carbon uptake by the Earth's plants is much more fragile than we previously realized,” Duffy said. “Essentially, we can't continue to rely on the biosphere to 'pay our emissions tab,' so to speak.”

In December 2015, nearly 200 United Nations delegates addressed the international agreement, or Paris Agreement, and put into effect that all countries be brought together to reduce global greenhouse emissions, according to WRI.

Duffy’s findings sped up this process with alarming evidence of accelerating climate change, as photosynthesis declines and energy levels rise.

“Locally, we need to focus on building forest resilience to climate change via forest restoration,” Duffy said. “This will improve the health of our forests locally, making them more resilient to climate change, not to mention reduce wildfire risk.”

According to a NASA analysis, the last seven years have had the hottest temperature increase on record, so it is no surprise changes are happening. Continuing on this course, 2020 came up with a tie for the warmest year ever.

NAU professor of biological sciences and co-author George Koch said he believes there are hopeful solutions to conquer the carbon problem.

“President Biden has stated that tackling climate change is a top priority,” Koch said. “He plans to rejoin the Paris Climate Accord and take an aggressive approach to seeing the United States become a leader in reducing greenhouse gas emissions. He may increase automobile energy efficiency standards and provide other incentives for increased energy efficiency.”

With many processes still ahead for the U.S., Koch believes some solutions can begin right now.

“Because it's so sunny, Arizona is a great place for solar energy,” Koch said. “As more people invest in rooftop photovoltaic systems, and as large energy companies like APS do the same, we'll reduce our collective emissions of greenhouse gases.”

Solar United Neighbors (SUN) recently joined with the city of Flagstaff, Sedona, and other northern Arizona areas to help residents go solar, with the goal to save money and be more accessible to the communities. Since joining Arizona in 2019, SUN has saved more than 26 million pounds of carbon in the atmosphere, according to recent co-op statistics.

Junior Gilley Arnold said NAU does a good job at educating students on environmental subjects and is very much aware of pressing matters surrounding climate change. The chemistry and environmental engineering major agrees with the study and believes humans are the problem.

“Earth goes through natural fluctuations in temperature, but right now, humans are speeding the process up by a lot,” Arnold said. “My concern with climate change is if we do not start figuring out alternative ways to produce less greenhouse gases, we are going to reach the point of no return and will not have a way to reverse the damage.”

Whether one is a student or not, Arnold thinks it is important to talk more about quick solutions people can take rather than talking about what is wrong.

“In some of my engineering classes, I would like to learn more about what we’re actually able to do to make things better, instead of learning just about the issues,” Arnold said.

In 2019, millions of young people took the streets in protest to demand effort in solving climate change. With this new study pushing the urge for action now, the race continues to solve this seemingly never-ending danger to the planet.