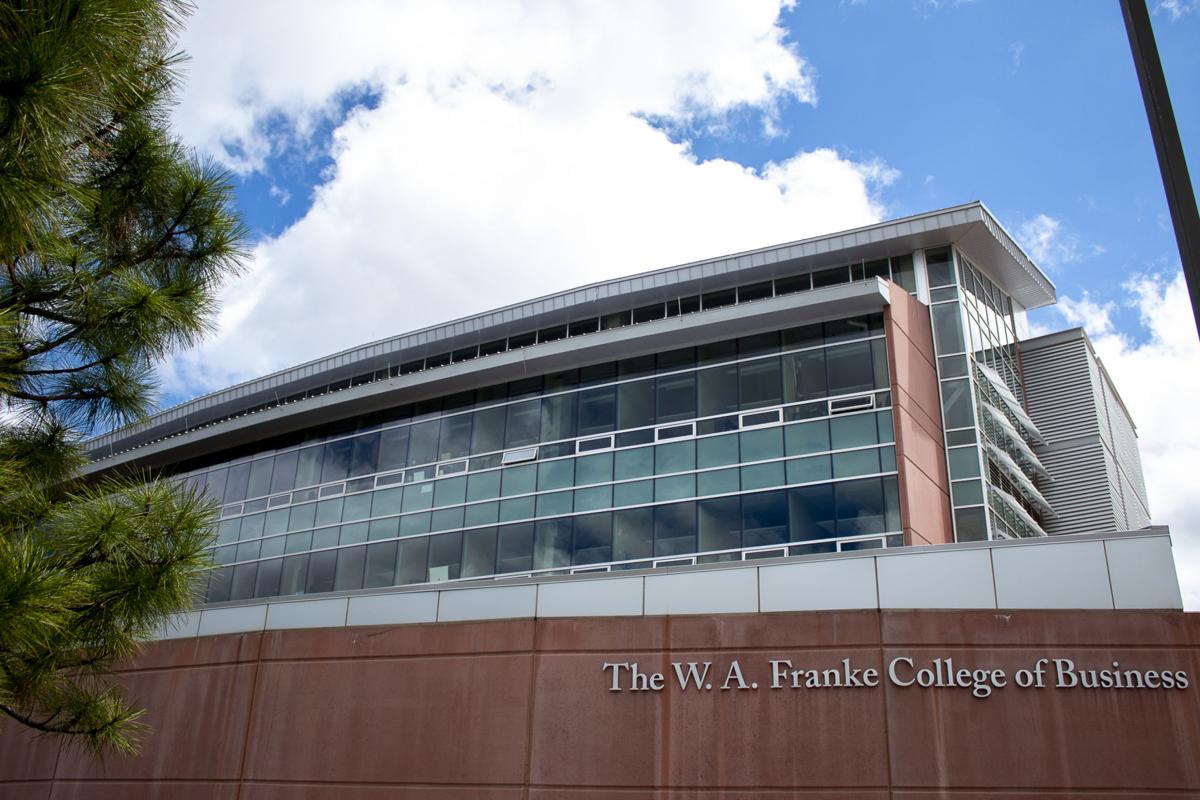 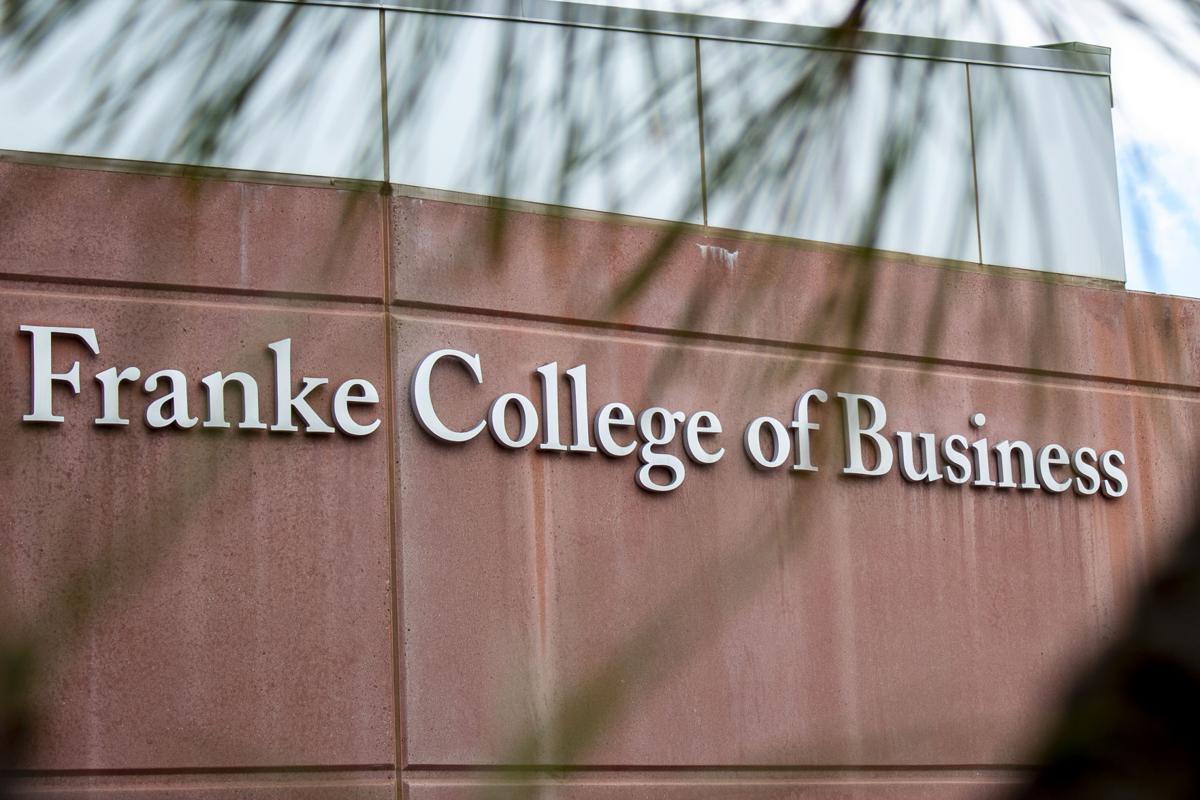 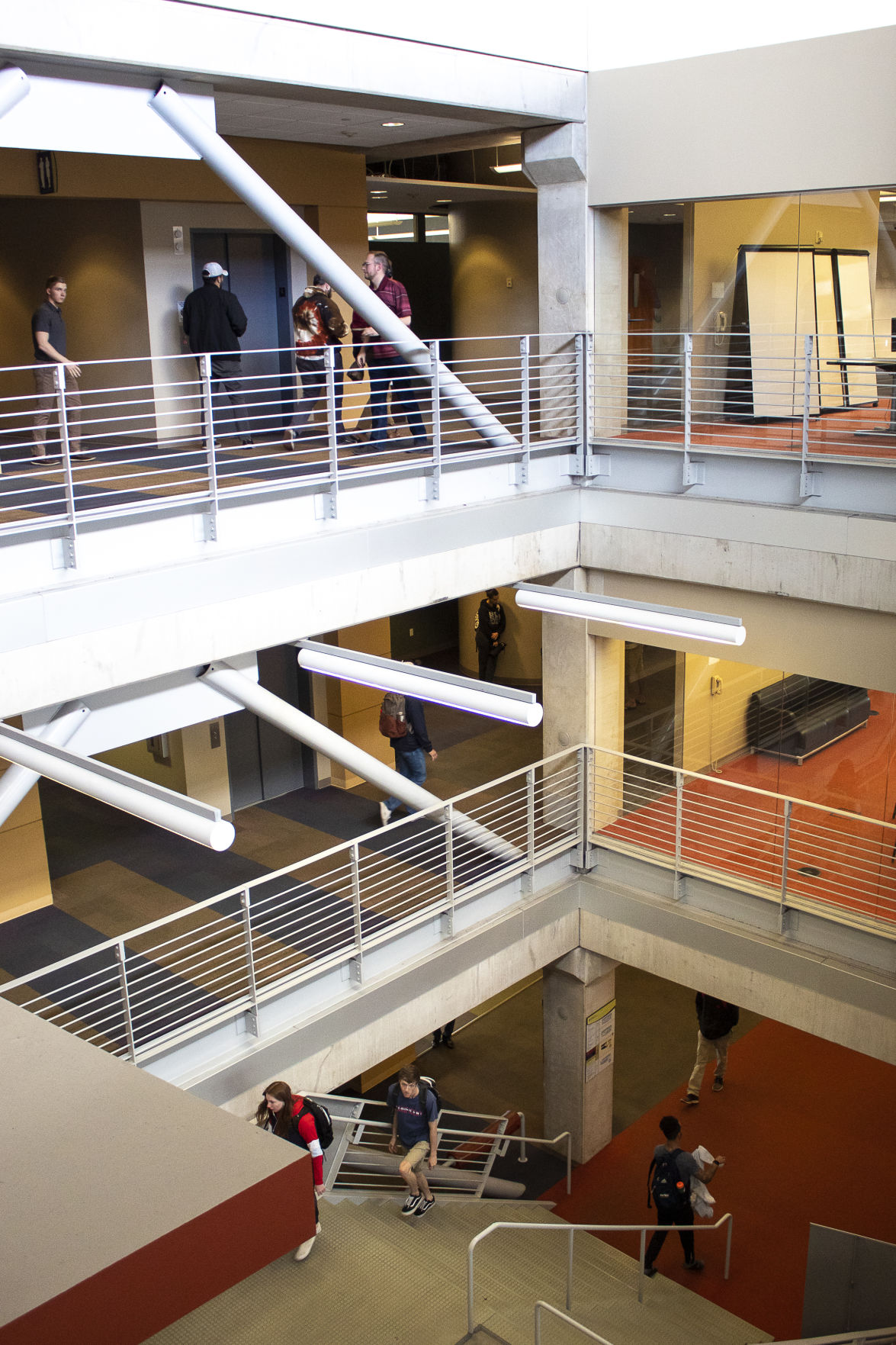 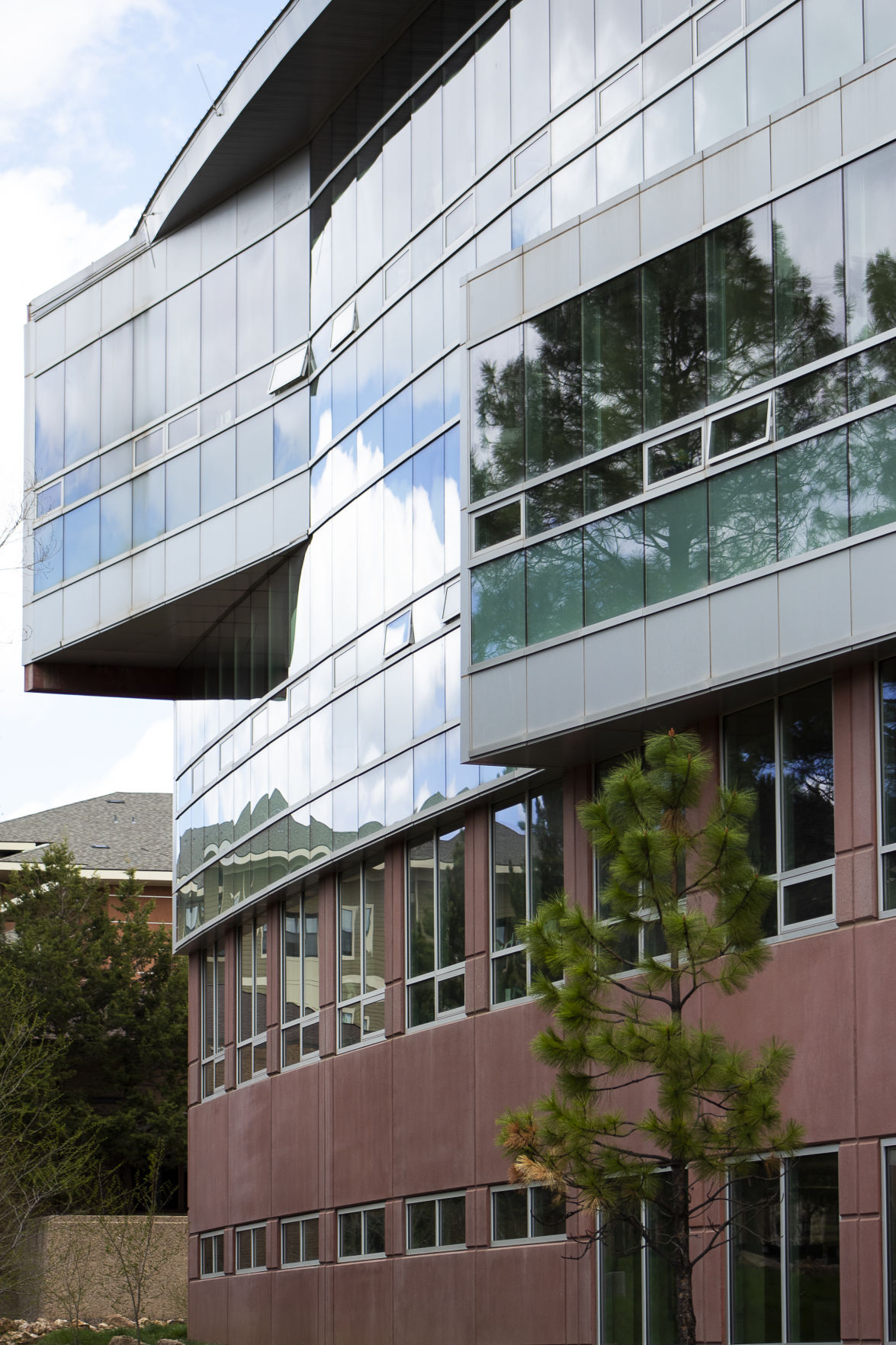 Come graduation week, there will be a number of newly empty offices in the W.A. Franke College of Business (FCB) due to a record number of faculty departures. According to NAU President Rita Cheng, there are seven “announced” retirements or individuals who are moving on within FCB faculty. However, multiple sources within FCB say the actual number is closer to 12 recently open positions out of 67 total faculty, an 18% turnover. Sources report that most of these open positions are tenure-track.

Over the past several weeks, The Lumberjack has been investigating concerns within FCB and discovered tensions between faculty and higher administration, including the Office of the President.

These frustrations have added further strain to the ratio of faculty doing scholarly research required by the Association to Advance Collegiate Schools of Business (AACSB International) for retaining accreditation.

“I think that we’re in a state of alarm,” said Bernadine Lewis, FCB Director of Undergraduate Programs.

The mounting pressure for faculty to increase their workload has been a reason for an evident sinking level of morale among faculty and staff within the college.

Along with early retiring faculty and those leaving Flagstaff for opportunities to teach elsewhere, low morale has played an integral part in the recent vacancies.

“This is definitely the lowest that morale has been,” said Lewis, who has been at NAU for 10 years. “The reality is you have some professors leaving because they do not feel like they are appreciated for what they’re doing. They’re finding a level of unhappiness for whatever reason ... and that’s sad, but it’s a reality.”

Professor Tim Clark began his career at NAU 10 years ago as a tenure-track faculty member. His reasons for moving to the elevated college town were the same as many. He had a love for the welcoming community, the breathtaking atmosphere of outdoor living and a job that he was excited about.

Clark had intentions of planting permanent roots in Flagstaff, but as frustrations with his job at NAU have grown over the past five years, Clark decied to leave his tenured position for a non-tenured position at another university.

“I wanted to finish my career here ... I had no intention of going elsewhere,” Clark said. “I even built a house here. I'm almost done and it looks like I'll never be able to live in it ... That was my dream and it’s a disappointment.”

Clark is one of many faculty members in FCB who are leaving their jobs after this academic year in search of greener pastures as pressures on faculty mount and concerns about the school grow.

Clark has stated that over the past five years, morale has “steadily eroded.” In addition, over the past couple of months with accreditation concerns looming over faculty members’ heads and a discouraging meeting with the president and provost April 8, morale has only gotten worse.

“I cannot think of an employer that I have worked for whose morale is lower than this,” Clark said. “The morale was already on the decline, if not an all-time low, a couple months ago, which is why I and a couple of others looked for jobs elsewhere.”

The Lumberjack reached out to dozens of faculty across FCB. Three have commented on the record and multiple others have remained anonymous, including an anonymous letter sent to the newspaper in order to avoid “consequences for the person that [they] get the information from.”

The ratio for tenured Ph.D. scholarly positions is 40% of total FCB faculty to meet the AACSB International accreditation standard. NAU is one of 865 schools throughout 56 countries accredited by AACSB International. NAU has maintained its accreditation status since the mid-1960s. In order to mainatin the scholarly faculty ratio, FCB has received approval to search for eight tenure-track faculty that will join the college full time by fall 2020, according to FCB Dean Daniel Goebel.

Suzanne Mintz, AACSB International's assistant vice president of accreditation strategy and policy, emphasized the unlikeliness that a college would get its accreditation revoked. According to Mintz, since 2016, there have only been four schools worldwide that have lost accreditation and even then it was “voluntarily” given up by the colleges before accredidations were stripped away. Mintz also said the last time a college got stripped of its accreditation due to issues so egregious was more than a decade ago.

However, the anonymous writer states that there is a “larger issue” within the college of business that has nothing to do with the state of accreditation.

According to the letter, President Rita Cheng has reduced FCB's faculty and staff to the point that the college has “at least 60 classes” for the fall semester that do not have a full-time faculty member to teach them. The drop in faculty has affected many student initiative projects. When asked about the 60 positions, Dean Goebel has yet to comment.

The letter goes on to state that FCB has lost 10 to 15 faculty and counting in the spring 2019 semester due to the poor environment within the college.

Additionally, the author pointed out that FCB’s executive job shadow program, which is is an important initiative to the Franke family who fund the college, has been put on hold due to lack of qualified staff.

“There is a clear neglect that the FCB receives from [President Cheng],” according to the anonymous letter. “The college is slowly deteriorating. The college has zero support from the president to enable the college to be successful.”

In Lewis’ 22 years of work in higher education, she found it unusual that President Cheng, who has an Master of Business Administration (MBA)from the University of Rhode Island and has years of practice in business, doesn’t seem to be as involved with FCB.

“I expected having programs where the president would come in and do workshops with the students and talk to them and, for some reason, that has not happened,” Lewis said. “Usually a president will come in and give a lot of special attention to their discipline wherever they got their degree from.”

A meeting to discuss the future of FCB was held April 8 by President Cheng and Interim Provost Brian Levin-Stankevich regarding business faculty.

In the meeting, there were “three bitter pills” to swallow, according to Clark. It was announced that:

1. Leadership within FCB would turn over with Dean Goebel stepping down and Associate Dean Wade Rousse leaving for another opportunity.

2. The number of Ph.D. professor vacancies would increase substantially prior to the end of the academic year, with 12 potential openings.

3. According to Clark, President Cheng and Levin-Stankevich said the university would only be able to offer salaries that are 10% below market average for comparable colleges to hire potential professors.

The average salary between 31 full-time equivalent professors with a Ph.D. at NAU's FCB is $112,102, according to the 2019 fiscal year budget. ASU offers an average salary of $163,243 to its business scholarly academics and UA’s average salary is $162,670 for the same qualified position. Both ASU and UA are accredited by AACSB International. ASU salaries were provided by The State Press and UA salaries were provided by The Daily Wildcat newspaper. Positions including those within the dean’s office, directors and head management were not included in the averages.

President Cheng told The Lumberjack in an email that, “It is always a challenge to meet growing salary demands, especially in areas of highly competitive market value.”

The poor morale is a result of below-market salaries as well as FCB faculty noticing a lack in vision within the school.

“[The April 8 meeting] was really pretty blunt, unempathetic and uninspirational,” Clark said. “Not one statement regarded how to actually be a great college. There was nothing in there about long-term prospects to restore to this place the joy of working in a college we can all be proud of. Not one sentence from either the president or the provost referred to a visionary inspirational statement like that.”

Clark was also concerned with the faculty time commitment required for the hiring process, which can include “multi-dozen hours of subcommittees” for screening a single candidate. Clark has witnessed multiple qualified candidates that wanted to work at NAU, but the lower salary along with a higher cost of living in Flagstaff often pushed them to decline.

During the 10 years Clark has been at NAU, there have been four different deans within FCB. According to a 2017-2018 survey by AACSB International, a dean’s average time in their role is 5.9 years. Rather than someone familiar with the college taking the dean position, NAU will hire an interim dean from outside the university to fill the post vacated by Goebel, who is stepping down to rejoin FCB faculty.

“We will be bringing in an interim dean this summer to work on the leadership issues in the school,” President Cheng said during the faculty senate meeting April 22. “We reinforce that the business school is accredited and will continue to be accredited, [but] they have some issues.”

One of the issues according to business faculty is lack of communication between the president’s office, the provost and dean’s office toward FCB faculty. There also seems to be a lack of goals and future planning from higher administration.

“We would like to have a more deep and meaningful conversation with university leadership for more than an hour — more than just statements prepared,” Lewis said. “[We’re] waiting, expecting more communication, an opportunity to have a dialogue of what really is our mission for the college of business. What do we really want to do for our students? What are we really committed to?”

During his career, Clark has never witnessed a predicament like the one currently going on at FCB.

“I’ve never worked at any organization that is more opaque in its communication,” Clark said. “I started [looking for jobs elsewhere] when I started getting increasingly frustrated by the short-termism and the lack of strategic intention and execution [by] either the dean's office or from top administration.”

Many faculty within the college of business have only heard rumors to provide clarity toward the issue of faculty retention within FCB.

Communication issues for faculty in FCB were not only present during the AACSB International review process earlier in the 2018-2019 academic year, but are a continual concern for the college.

Director of the MBA program James Hilliard is another faculty member leaving NAU after five years at the university, but said he has been “generally very happy” and has worked well with administrators.

Still, he recognizes that there have been some struggles to produce research over the years at NAU.

“I think the biggest challenge is we’ve seen our increase in class sizes sap our research productivity,” Hilliard said. “I would say our focus on student engagement and classroom success may have come at the cost of some research support. I think those of us who are research inclined find that frustrating and when we see fewer resources to help alleviate that problem, that’s going to cause anyone to feel underappreciated and overworked.”

When asked if she believes there is tension between the president’s office and faculty within FCB, President Cheng stated in an email, “No, in fact, many of the issues raised recently have not been brought to my office. I look forward to working with our new provost and interim dean to move FCB forward.”