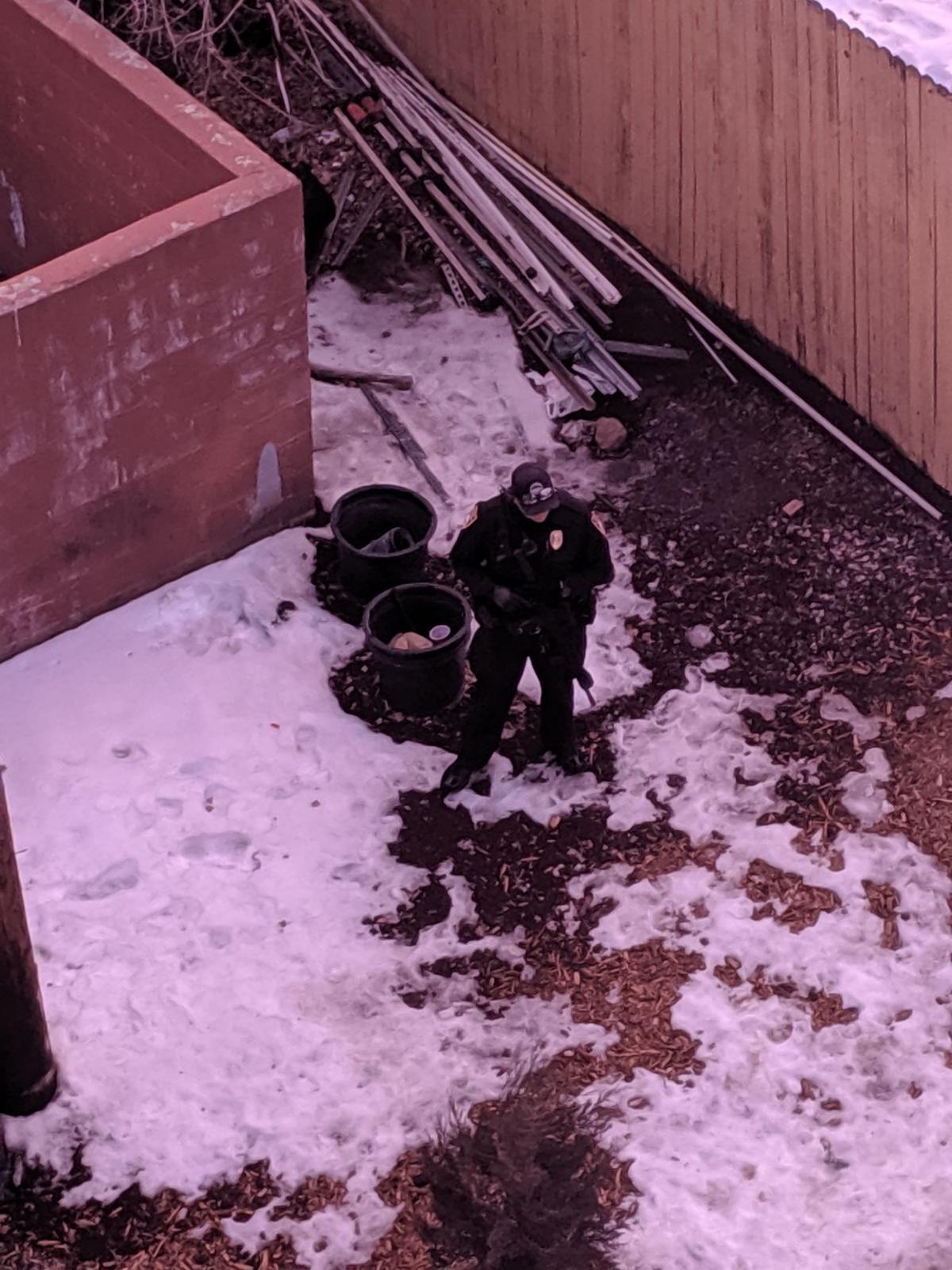 A police officer seen from The Standard at Flagstaff, Jan. 16. 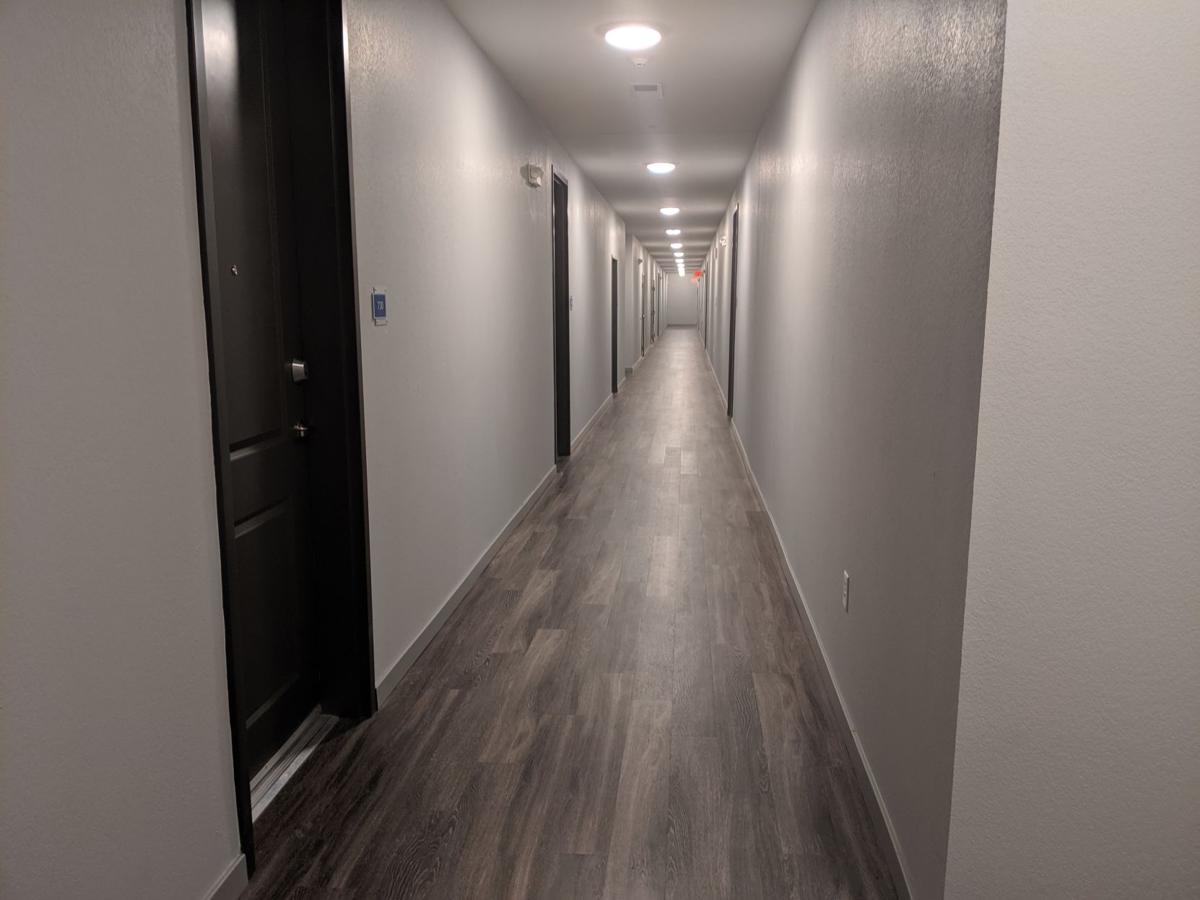 An inside hallway of The Standard, where an incident with a firearm took place, Jan. 16.

A police officer seen from The Standard at Flagstaff, Jan. 16.

An inside hallway of The Standard, where an incident with a firearm took place, Jan. 16.

Residents of The Standard were met with a surprise upon returning home from their afternoon classes last week, as crowds overflowed the standing area outside the complex and police flooded the street.

On Jan. 16 at 5:04 p.m., an unidentified man entered the complex carrying a firearm and wearing a bulletproof vest. Within minutes, the Flagstaff Police Department (FPD) arrived at the scene on West Route 66 with force, lining the righthand side of the street with police vehicles and deploying officers to patrol the building’s perimeter.

Before long, police began clearing sections of the building as residents anxiously waited outside — an operation that would last just short of two hours. Individuals inside the building at the time of the incident were asked by The Standard staff to lock their doors and wait inside.

“Flagstaff officers responded quickly. When they arrived at The Standard, we provided them with surveillance footage that helped them identify the person who possessed the firearm,” FPD Public Information Officer Charles Hernandez said. “Simultaneously, the officers were conducting a thorough floor-to-floor safety and security search. Fortunately, during that process, they were able to locate the individual.”

The suspect was identified by police as 24-year-old Kestin Gary, who entered the complex via an elevator behind an electronically locked door requiring a key. Gary, who is not a resident at the complex, was let in by a frightened resident, according to an email from The Standard.

Gary was apprehended and charged with disorderly conduct, Hernandez told The Lumberjack. Gary entered the complex to visit friends and there were no signs pointing to malicious intent. However, the complex has a strict no firearms policy, which, along with the public display, resulted in police taking Gary into custody.

“There is a no firearms policy, which caused the panic,” Hernandez said. “He was a guest of a resident here.”

“This is all just a big misunderstanding. We had no idea [Gary] was coming with a gun and he had no idea that he was doing anything wrong,” an anonymous source connected to the suspect said.

At the time that police apprehended Gary, he was not in possession of the firearm or bulletproof vest, according to an email sent to residents of The Standard. He led police to an apartment within the building where the items in question were found.

Witness accounts were confirmed by The Standard, which aligned with the account that friends of Gary were not aware that he was bringing a firearm. Hernandez confirmed that a bulletproof vest and a rifle were secured by FPD, and that the suspect no longer posed a threat to residents.

Residents filled the standing area outside of the student housing complex, observing the situation unfold and anxiously awaiting the go-ahead to resume normal building activity.

“He was taken into custody on a criminal charge of disorderly conduct,” Hernandez said. “He is not charged with any weapons-related violations, but it did cause panic within the residents here, and we are happy that the outcome of this incident was a peaceful and successful one with minimal charges.”

Those waiting outside were eventually allowed to wait inside the building’s lobby, as temperatures lowered and police made their way to clear the upper floors. Hernandez said Gary was first spotted on the fifth floor. Further details, such as the exact location within the complex, are not confirmed.

The Standard has a strict no-firearm policy signed by all residents in their lease agreement, stating that a resident is in violation of their contract if in possession of “any handgun, firearm or weapon of any type.”

Although the suspect was not a resident, the no firearm policy still applies, according to The Standard staff and Hernandez.

Police responded to the incident as a precaution, but no criminal activity was confirmed other than the disorderly conduct. Hernandez said a large “show of force” responded to the scene swiftly, which included approximately 12 police vehicles.

FPD did not suspect any threat to the safety of residents, according to The Standard.

“We are extremely grateful that no one was harmed during the incident, but we are disappointed in the individual’s extremely poor judgment ... As a result of violating community guidelines, the individual has been banned from our property,” according to an email to residents from The Standard. “We ask that you please keep us informed of any suspicious activity and to immediately contact the police if you feel threatened or believe anyone in our community is at risk.”