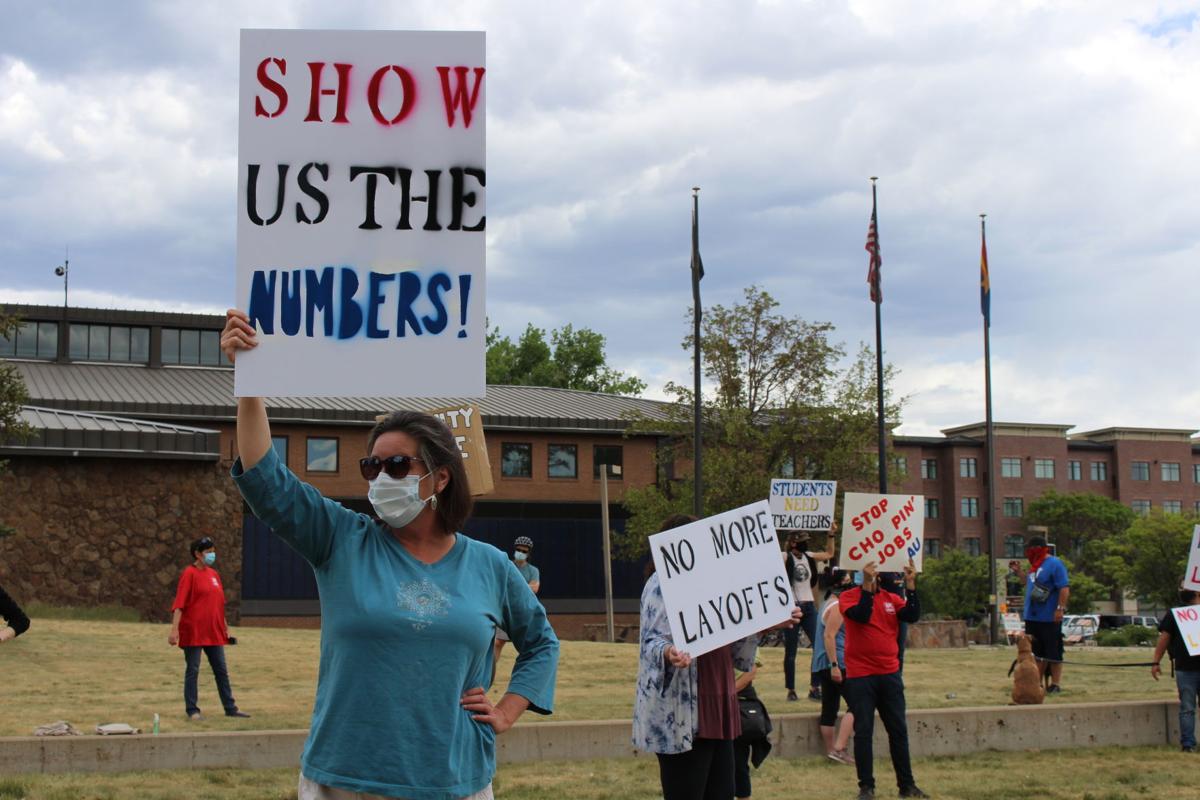 Many attendees also advocated for greater transparency between administrators and staff members, May 27. 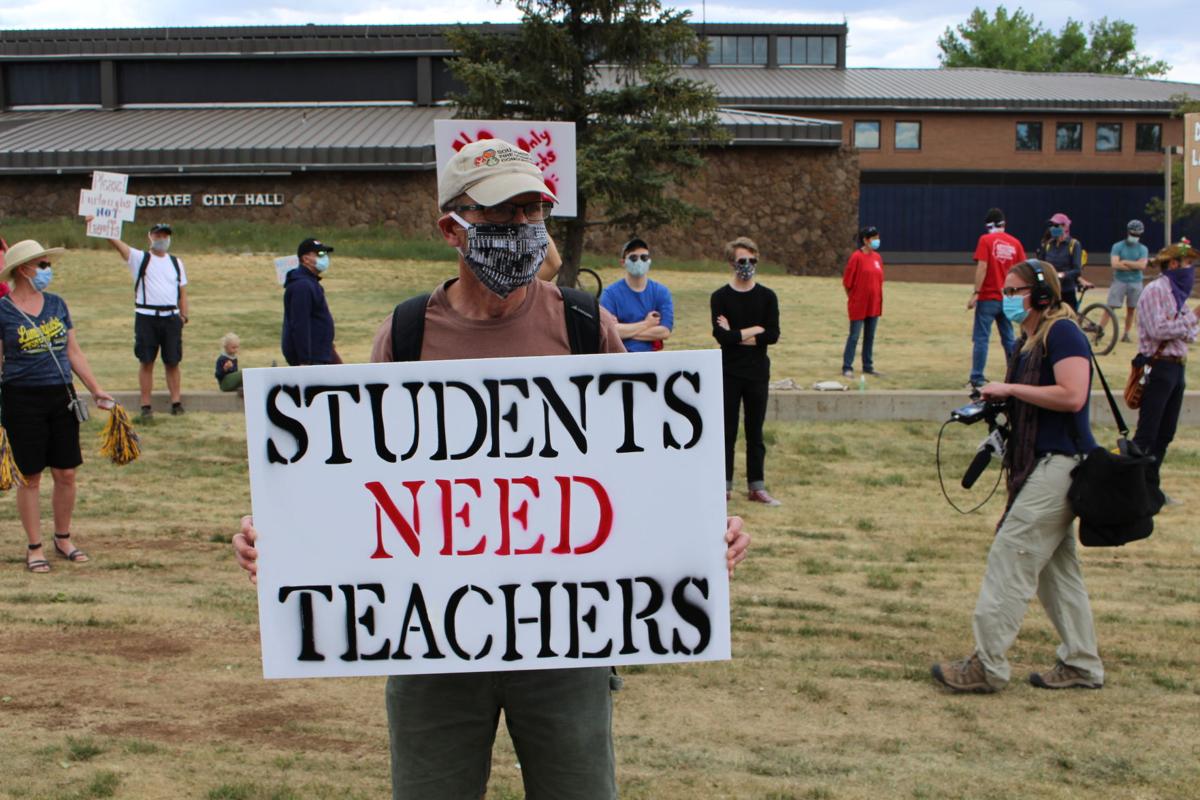 Others worried that layoffs will increase student-faculty ratios, subsequently decreasing student success, May 27. 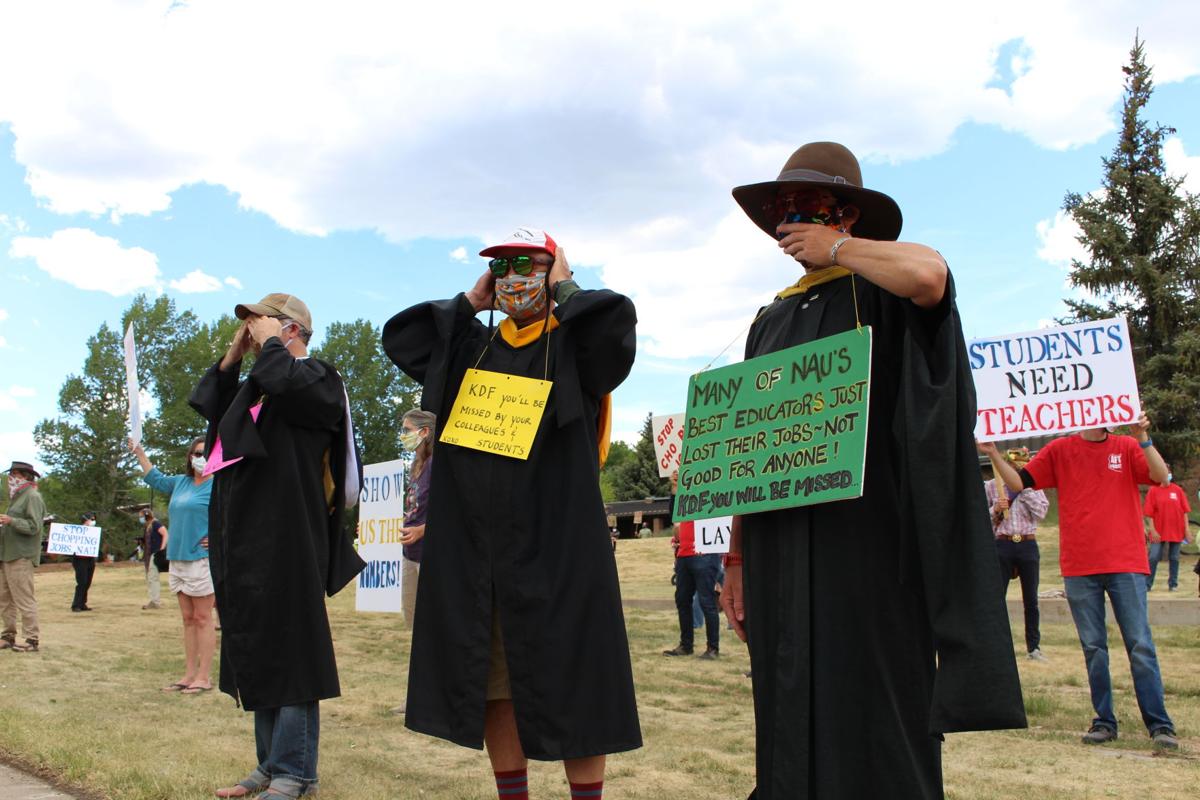 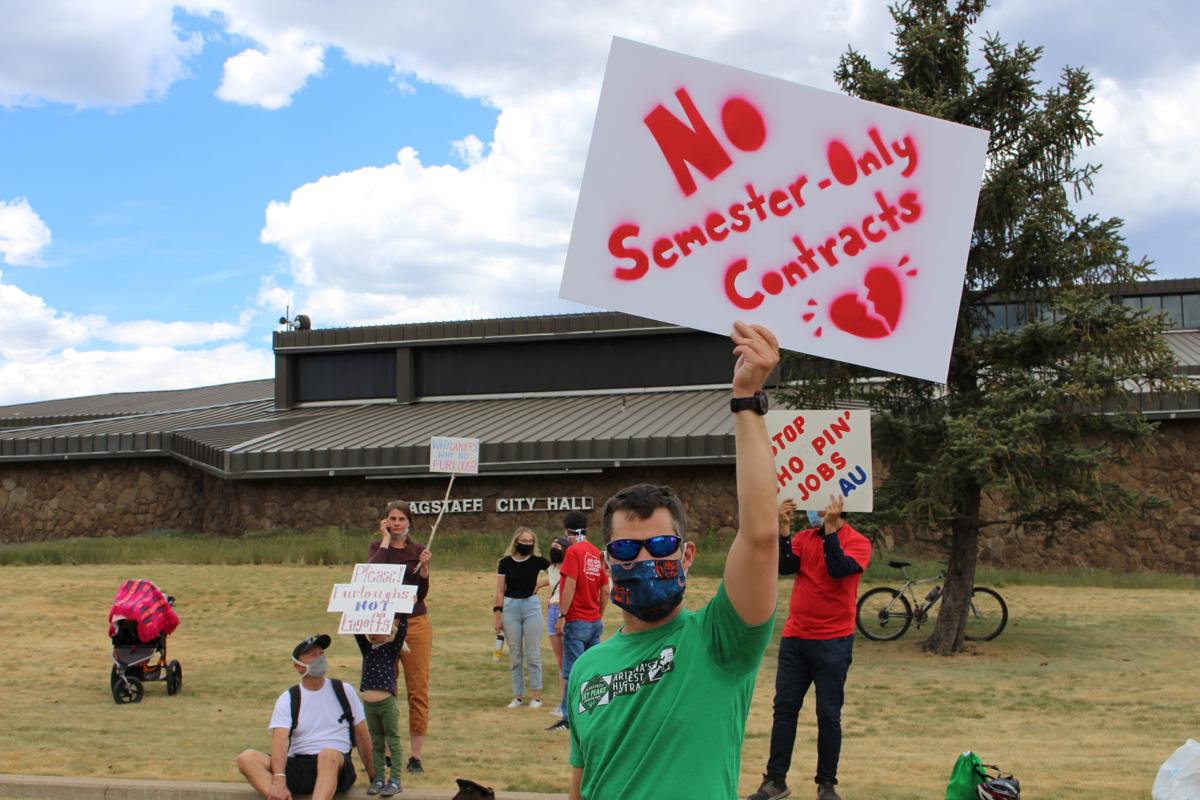 Many protesters fought against short-term contract renewals, May 27.

Many attendees also advocated for greater transparency between administrators and staff members, May 27.

Others worried that layoffs will increase student-faculty ratios, subsequently decreasing student success, May 27.

Many protesters fought against short-term contract renewals, May 27.

Peaceful protesters gathered outside Flagstaff City Hall to take action and save jobs at NAU. Amid the COVID-19 pandemic, class sizes, course structures and faculty jobs have all been questioned, leading to various controversies around the community.

The university estimated $30 to $100 million in financial impact, which could vary based on enrollment figures and event cancellations, according to an email from President Rita Cheng on April 27. These predictions led to another email sent by Cheng May 22, which announced probable salary reductions for senior administrators, along with tiered pay cuts or furloughs for other employees.

Furthermore, the email stated that effective July 1, Cheng and her executive team will take 10% pay cuts for the 2021 fiscal year.

“Transparency has and will continue to be my commitment,” the email stated. “I will continue to communicate and engage with every part of the community, listening to your suggestions and providing updates about our response, planning efforts, and budgetary implications.”

Gerald Wood, an associate professor and president of the American Federation of Teachers labor union, said this transparency between higher administration and staff members is critical as the pandemic progresses. However, he added that more communication is necessary.

“Show us the numbers, because the numbers don’t add up,” Wood said. “We are trying to make sure the administration separates the pandemic from the projected decline in enrollment.”

As the fall semester approaches, Wood said 87% of students plan on returning to classes. A recent article in The New York Times closely mirrored this claim, referencing a higher-education trade group’s finding that enrollment will drop by 15% nationwide. In this regard, Wood said NAU could be using COVID-19 as an excuse for making significant adjustments to class sizes, pay scales and faculty workloads.

“Utilizing the pandemic as a way to make long-term cuts is a morally bankrupt strategy,” Wood said.

One specific area that already witnessed changes is the College of the Environment, Forestry, and Natural Sciences (CEFNS). The School of Earth & Sustainability — which is a part of CEFNS — recently announced adjustments for the upcoming semester.

Both faculty members explained the importance of non-tenure track (NTT) employees at the university. The three lecturers who were not offered new contracts teach large intro-level classes, they added, which serve approximately 2,000 students every semester.

“As the NAU community, we all recognize the vital role that our non-tenure track faculty and staff play in the education of our students,” Regalla said. “We were willing to have much higher furloughs to save their jobs, and we were not allowed to do that.”

Similarly, Fegyveresi said many faculty members are ready to sacrifice portions of their pay, retirement or other benefits to help keep NTTs employed. For example, if NAU reduces its retirement matching policy for a few years, this system could potentially spare additional money and jobs.

“I think people are really willing to make a huge sacrifice — at least in our school and our department — in order to save these jobs,” Fegyveresi said. “I just feel like no matter what ideas we come forth with, we’re falling on deaf ears.”

As addressed in a former article in The Lumberjack, UA announced staggered furloughs and pay cuts for its employees. Both Fegyveresi and Regalla said this system is better than using layoffs, which they said make NAU more of a business than an educational institute.

While these changes are considered, the two assistant professors also said higher administration must communicate more actively and effectively with lower-level employees. Even with the challenges posed by COVID-19, honesty is critical.

“We all have to come together and make mutual sacrifices for the betterment of everyone,” Fegveresi said. “Being transparent with that information allows us to know that what we’re doing is actually for the greater good.”

Outside Flagstaff City Hall, the lawn was also filled with NAU students and alumni. Senior Audrey McPherron said the COVID-19 pandemic certainly caused a difficult situation, but also that it could have been handled better.

“I understand that it’s stressful for everybody involved, but it’s the administration’s responsibility to take care of their people, and it doesn’t sound like that’s happened,” McPherron said.

NAU’s student-faculty ratio is 19:1, and 30.1% of classes hold fewer than 30 students, according to U.S. News & World Report. These personable class sizes drew McPherron to Flagstaff, she explained, and also improved her undergraduate career.

However, following COVID-19 and possible layoffs, McPherron said she is worried that NAU will lose this appealing part of its community. 2019 graduate Kyra Bennett also said faculty members and class sizes should be prioritized, especially considering their role in student success, retention and overall experience.

“I personally feel like the faculty made my experience at NAU meaningful, and for them to be unsure of their employment after all they’ve given to the school community is disappointing,” Bennett said.

Instead of announcing layoffs, Bennett explained that the university's staff should be prioritized.

“I think the faculty are obviously the most important people at NAU, so I don’t know how I would handle everything, but I would put them first,” Bennett said.