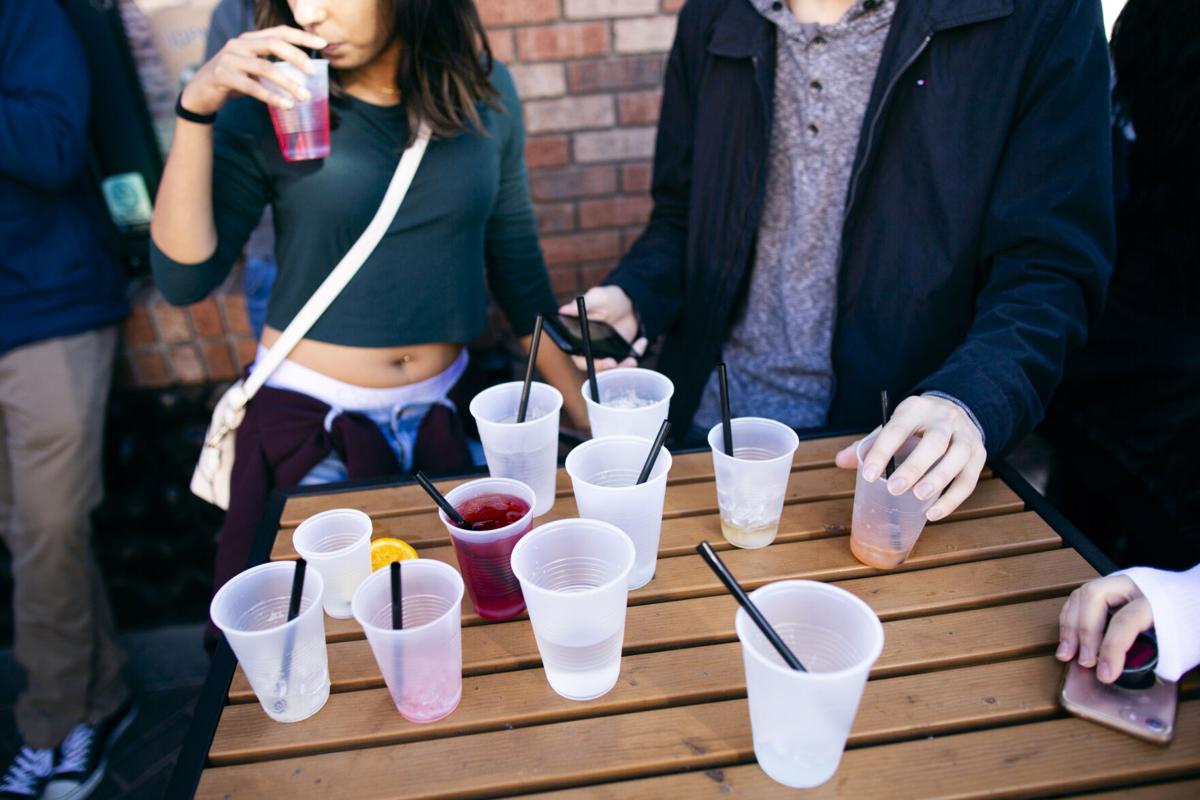 Drinks at various levels of completion are left on a table in downtown Flagstaff during Tequila Sunrise, Oct. 27, 2018. 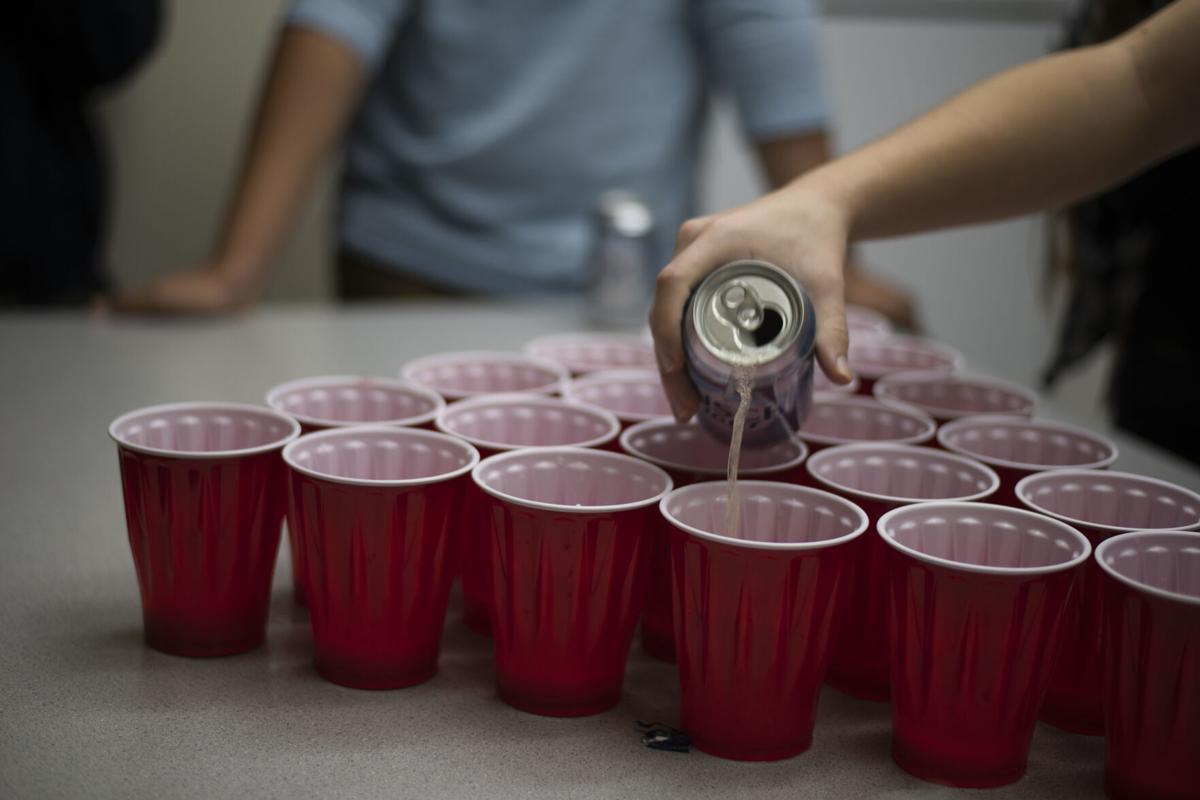 Beer is poured into red cups before the commencement of a drinking game at a house party in Flagstaff, Dec. 12, 2018.

Drinks at various levels of completion are left on a table in downtown Flagstaff during Tequila Sunrise, Oct. 27, 2018.

Beer is poured into red cups before the commencement of a drinking game at a house party in Flagstaff, Dec. 12, 2018.

With additional COVID-19 cases confirmed on campus in recent weeks, concerns about spread have continued as college students refuse to surrender parties and large gatherings.

According to Campus Health Services (CHS), in order to reduce the number of cases and decrease risk, the pandemic obligated colleges to minimize gatherings of five or more people. CHS clarified that students should decrease exposure by avoiding close contact, never sharing personal items and staying away from confined spaces, which can be elements of college parties.

The lack of obedience toward COVID-19 regulations can be filed as incident reports, which are available through NAU’s Office of the Dean of Students. According to the office’s website, this infrastructure allows students to highlight the nature of COVID-19 violations and the people who are exposed.

Faith Nagel, a medical assistant at Northern Arizona Dermatology Center, said there are not as many regulations nor punishments among the student body as there may seem.

“I have heard of like 15 parties in the past month with well over 20 people, either indoors or out in the wilderness,” Nagel said. “I don’t believe any have been reported nor do I know anyone in trouble for these parties.”

Despite ongoing emails distributed by NAU Student Affairs, along with the enforcement of suspensions, NAUPD and Flagstaff Police Department have not responded to these claims.

Four sororities and fraternities at ASU were put on temporary suspension late September, according to The Arizona Republic. Investigations of large gatherings, which were exposed on social media, continue with 162 cases currently confirmed by ASU.

“I don’t believe we should be going to parties at all,”  Nagel said. “Even though we could be asymptomatic, we can still spread the virus to our families and homes.”

While some believe that partying poses an extreme risk of getting sick, others believe these safety precautions are taking away their rights as college students.

Junior Amanda Rambert said instead of enforcing campus-wide requirements, students should be able to assess risk themselves.

“I go to parties, and I think people should during this time,” Rambert said. “I think it’s hypocritical that people are allowed to go to restaurants, movies, bars and any other social events where you eventually have to remove your mask to eat or socialize.”

Rambert explained that usually, the parties she attends have a mixture of people with or without masks. After going to parties, Rambert added she gets tested for the virus consistently.

“I completely understand that certain individuals pose a higher risk of the virus, and I think it is wise of them to refrain from attending parties or large social gatherings to [protect themselves],” Rambert said.

The brain does not stop developing until adults are in their mid-20s, and at this age, young people feel “invincible,” Forrest Talley, a clinical psychologist who formerly worked at University of California, Davis, told Business Insider. Rebelling against social norms and restrictions may even create a newfound sense of independence within this group.

According to a study conducted by Marcos Altable, a private practitioner of neurology, people are more likely to be in an unpleasant, anxious state after a period of social isolation because humans often thrive while interacting. Brains need the ability to communicate, Altable stated, or else the body can be at higher risk of coronary heart disease, strokes and other conditions.

Research from Altable’s study found social connectedness relates to staying healthy, just like hunger and thirst are also “unpleasant states.” However, he also said these discomforts must be endured to avoid the long-term effects of COVID-19.

Freshman Michael McAnerney said he is glad to finally be at college, although he wishes he could get the traditional college life.

“My college experience has been a mix of expected versus unexpected, [and] with no orientation and starting classes online, it was a weird transition from high school to college,” McAnerney said. “Making friends was hard at first, and except for my roommate, I hardly met people because Zoom classrooms are no replacement for in person.”

As a freshman, McAnerney found himself with more free time than expected, and even though he is not a huge partier, he still missed sharing interactions with his friends.

“If it had been a normal year, I would have given it some thought, because I am not against parties — but this year it is just too risky,” McAnerney said. “Eventually I would love to go to parties, but at the end of the day, I didn’t come here to party. I came here to learn."