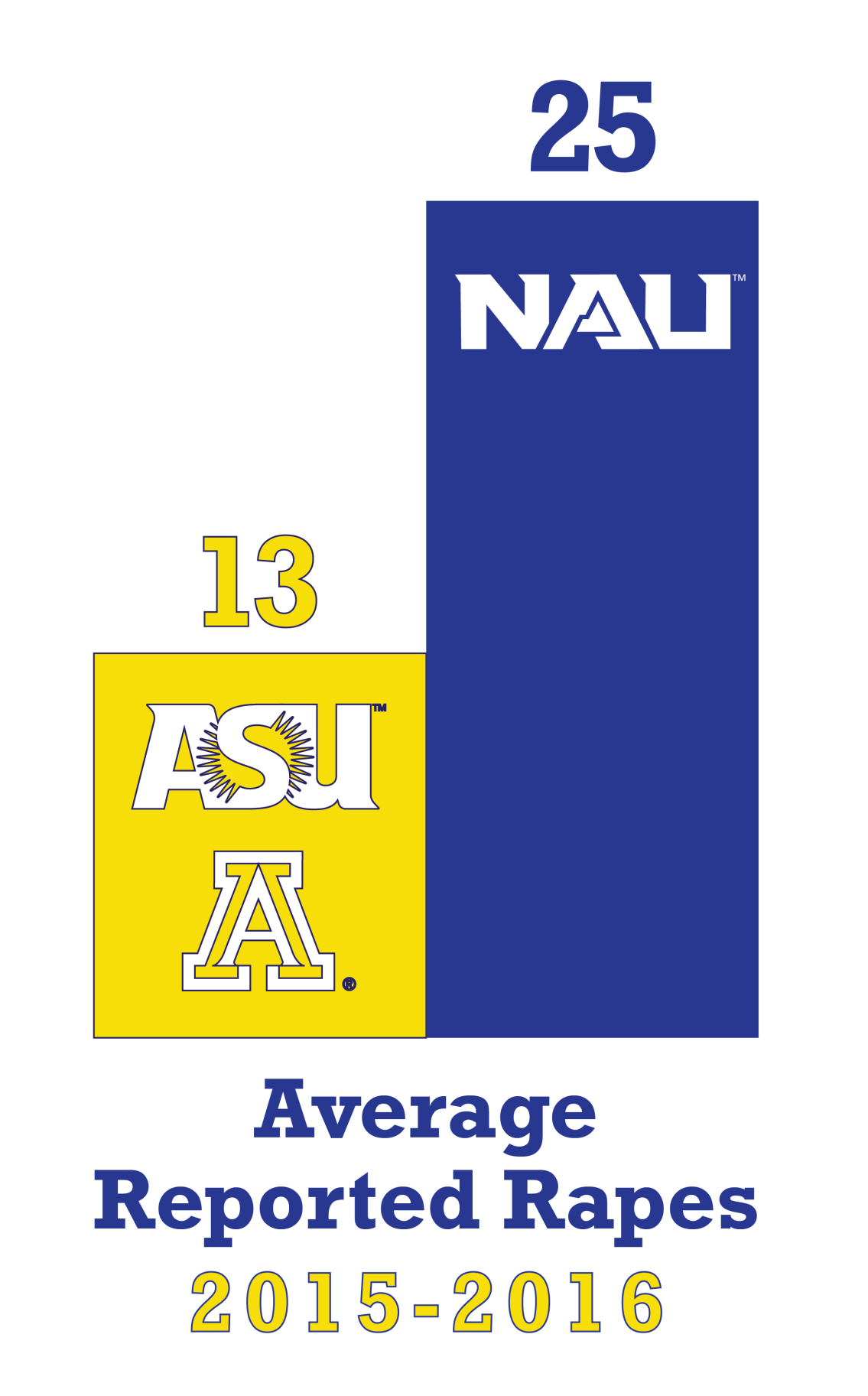 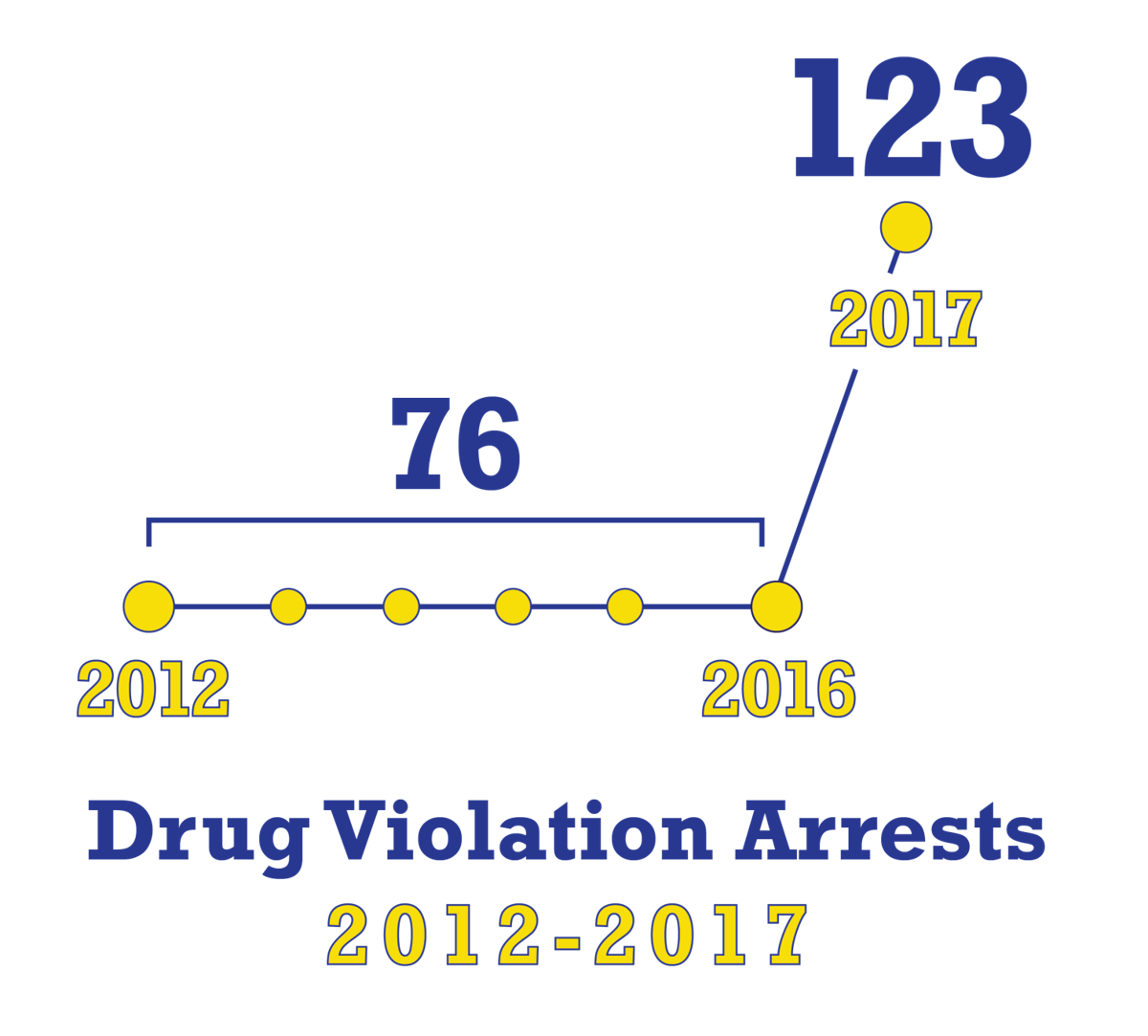 Crime rates at NAU are always fluctuating. To keep track of its prominence on college campuses, the federal government’s Clery Act requires universities across the nation to report on all on-campus crime annually. Known as the Clery Report, NAU’s 2017 report has been made available to the public.

The most prevalent statistic is reported rapes. From 2011 to 2014, the average reported incidences were 13 per year. However, that number almost doubled from 2015 to 2017, averaging almost 25 per year over the time span, with 2017 totaling 31 cases.

Kirk Fitch, director of Clery compliance and the composer of NAU’s report, explained why these numbers are increasing at such a staggering rate.

“There’s definitely more frequency on reporting, not necessarily incidents. There is much more awareness every year, so more of these incidents are being reported by victims. We also have more delayed reports coming in,” said Fitch.

He also credited the higher numbers to availability of resources for victims on campus, claiming NAU has a very robust system for supporting victims compared to other campuses.

Fitch predicted the rise in reported rapes is going to increase each year as the student population grows as well.

Lynn Jones, associate chair of criminology and criminal justice at NAU, provided her expertise on the subject.

“There’s greater awareness of what rape is, and students are more readily identifying when those situations happen to them,” said Jones.

Jones asserts rape continues to be one of most underreported crimes, but people are coming out in other ways, such as counseling, if they’re not reporting it officially with a criminal case.

Fitch stated NAUPD tries to use social media frequently to inform students and create as many in-person training classes as possible.

“It’s a challenge because students have a limited amount of time to allow them to utilize the information out there,” Fitch said.

Despite being the smallest of the three state universities, NAU appears to have a better reporting and training program for sexual assault.

ASU and UA averaged 13 reported rapes from 2014 to 2016. Nearly half compared to NAU, despite both of those schools being larger in population and campus size.

Another crime statistic on the rise at NAU were drug law violations. Since 2012, the average number of arrests made from these violations were approximately 76, until 2017 when 123 arrests were made.

Fitch claimed part of the issue is that there are some students coming from states where marijuana is legal. Medical marijuana is currently legal in Arizona, yet on campus it is still a violation of the student code of conduct.

Jones speculated marijuana wasn’t the only drug that NAUPD was cracking down on.

“We know there are more problems in the country related to opioid abuse,” Jones said.

Analysts from The Council on Foreign Relations stated the problem started with the abuse of legal prescription pain medicine.

The number of annual average of arrests for liquor law violations have decreased in the past four years. 2011 through 2013 averaged about 185 arrests, but it has decreased since then to roughly 86 arrests in 2016.

Referrals were much more abundant for these violations compared to arrests, resulting in about 839 per year since 2011.

Fitch explained referrals are more frequent in general, as they are typically given to first-time offenders. Moreover, most students were caught in campus residencies where they were reported by Residence Assistance and disciplined by Resident Life or Student Life.

Jones pointed out that alcohol is much more accessible to students compared to drugs, making referrals more prevalent as well.

She added that when considering the overall population of NAU, most students were most likely not abusing drugs and alcohol or at least not getting caught.

Finally, burglaries have seen a significant decrease at NAU. There were approximately 38 per year from 2011 through 2014, but that number has dropped to almost six since 2015, with only one being reported last year. However, these numbers may be flawed.

Fitch said this was because the federal definition of a burglary for Clery purposes is more restrictive than Arizona’s definition of the crime.

The Clery report also left out certain stolen items such as bicycles, which are always one of the larger issues regarding theft on NAU’s campus.

On the other hand, Jones believed technology played an important role in the drop in reported burglaries. With advancements in technology, more valuables are in electronics, which students carry around with them.

“People may not have cash, but they have their credit card information on their smartphone or laptop, decreasing opportunities for burglaries,” Jones said.

Even with carefully analyzed data and statistics, the Clery Report only gives a glimpse into criminal activity on campus. Its definitions for certain crimes are vulnerable to alterations by the year, and it relies exclusively on the crimes that are officially reported.

No matter what the numbers say, it is ultimately the responsibility of the students to improve the campus, community and culture of NAU.