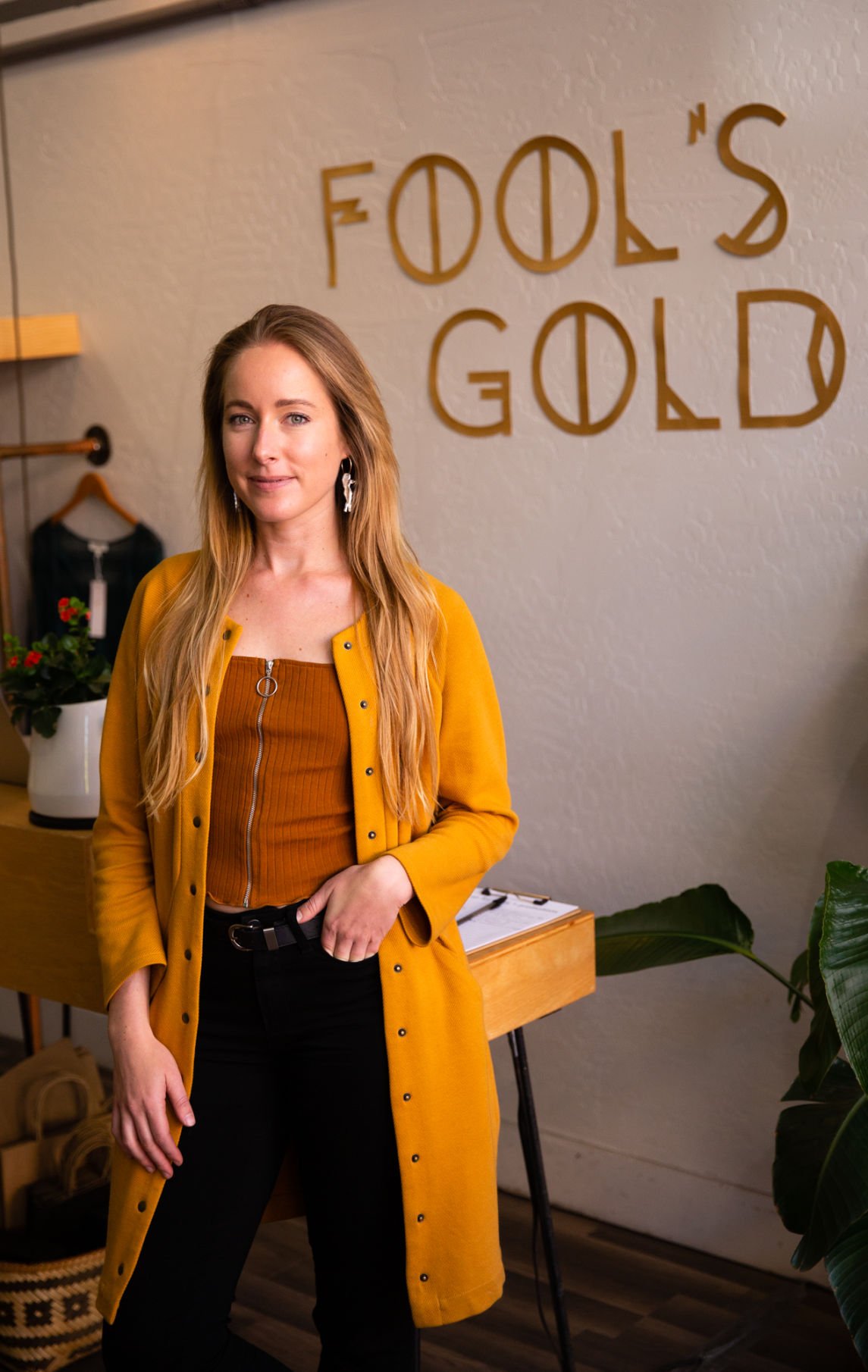 Meredith Butler in front of her Fool's Gold boutique, Sept. 29. 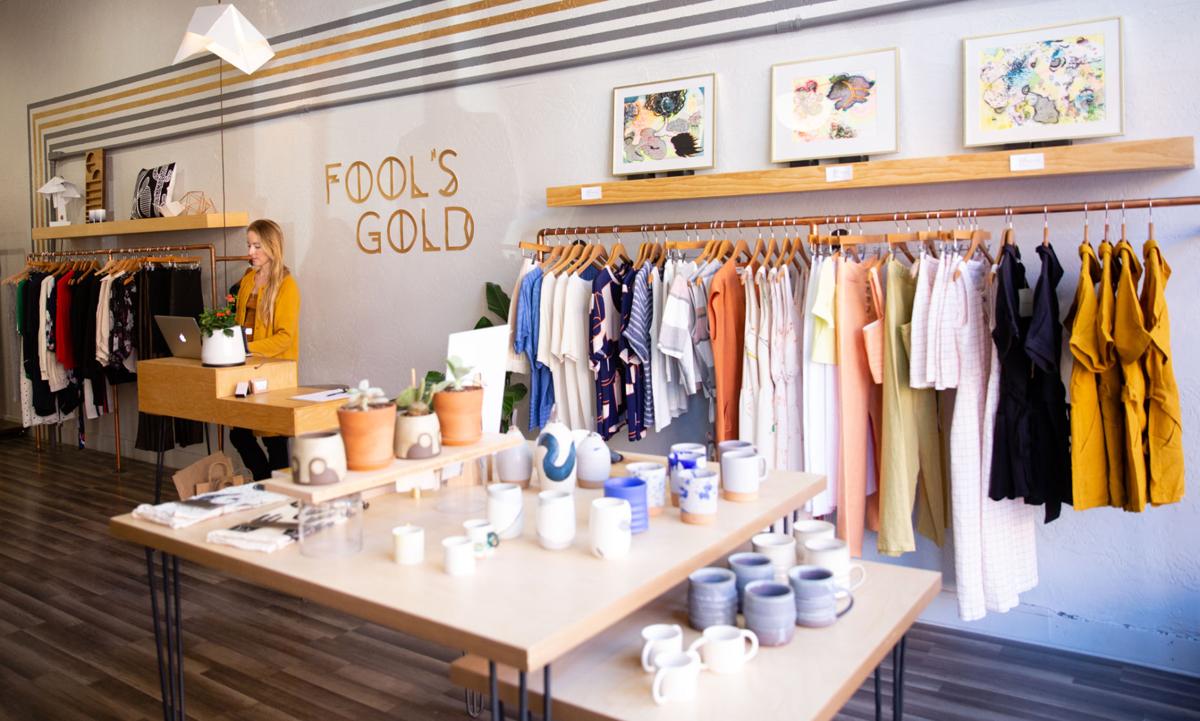 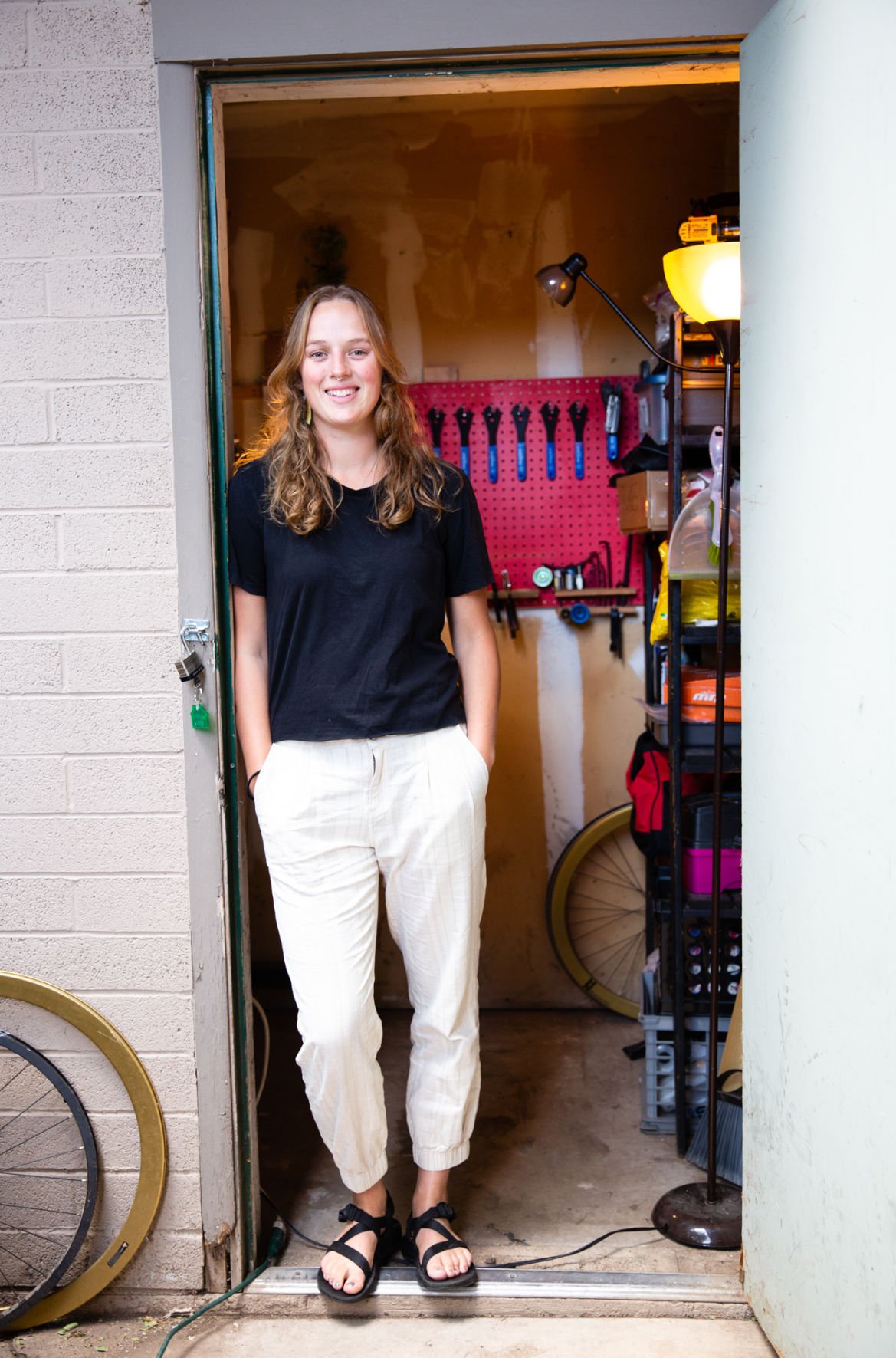 Ava Miller in the entry way of her work space, Sept. 27. 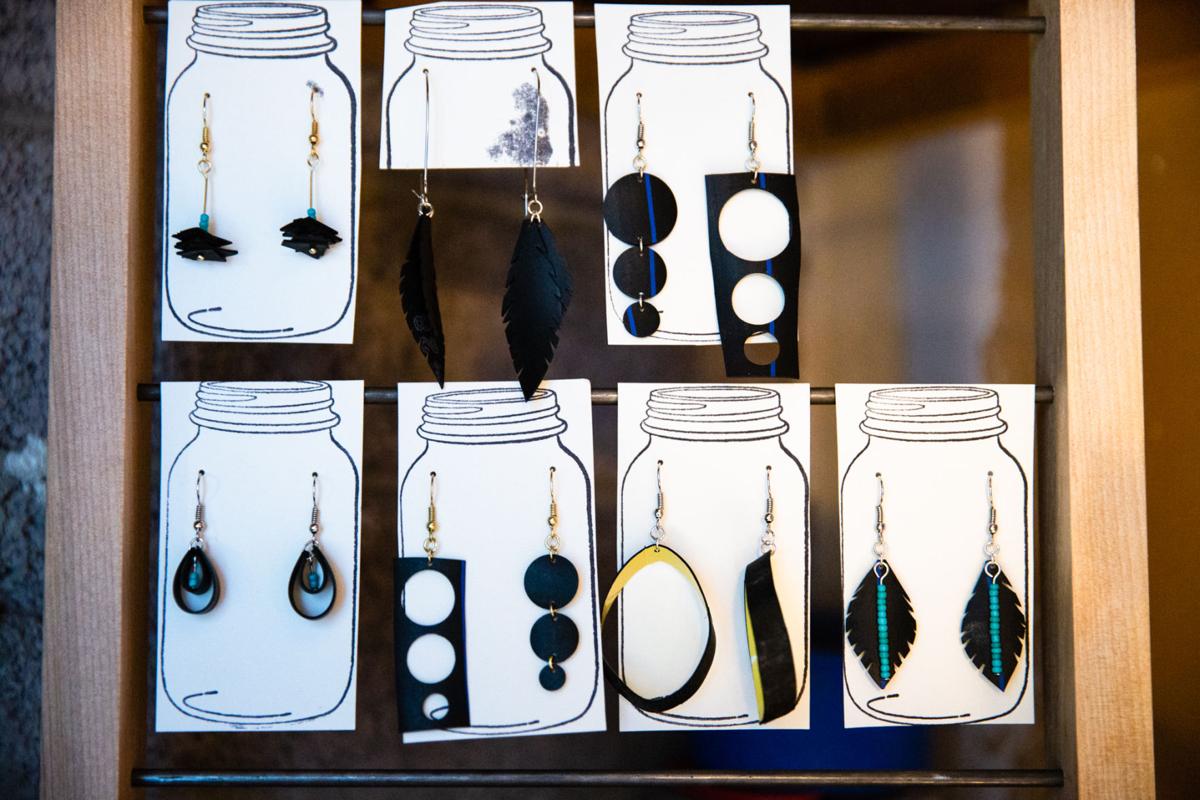 Seven pairs of earrings made out of old bicycle tires by Ava Miller, Sept. 27. 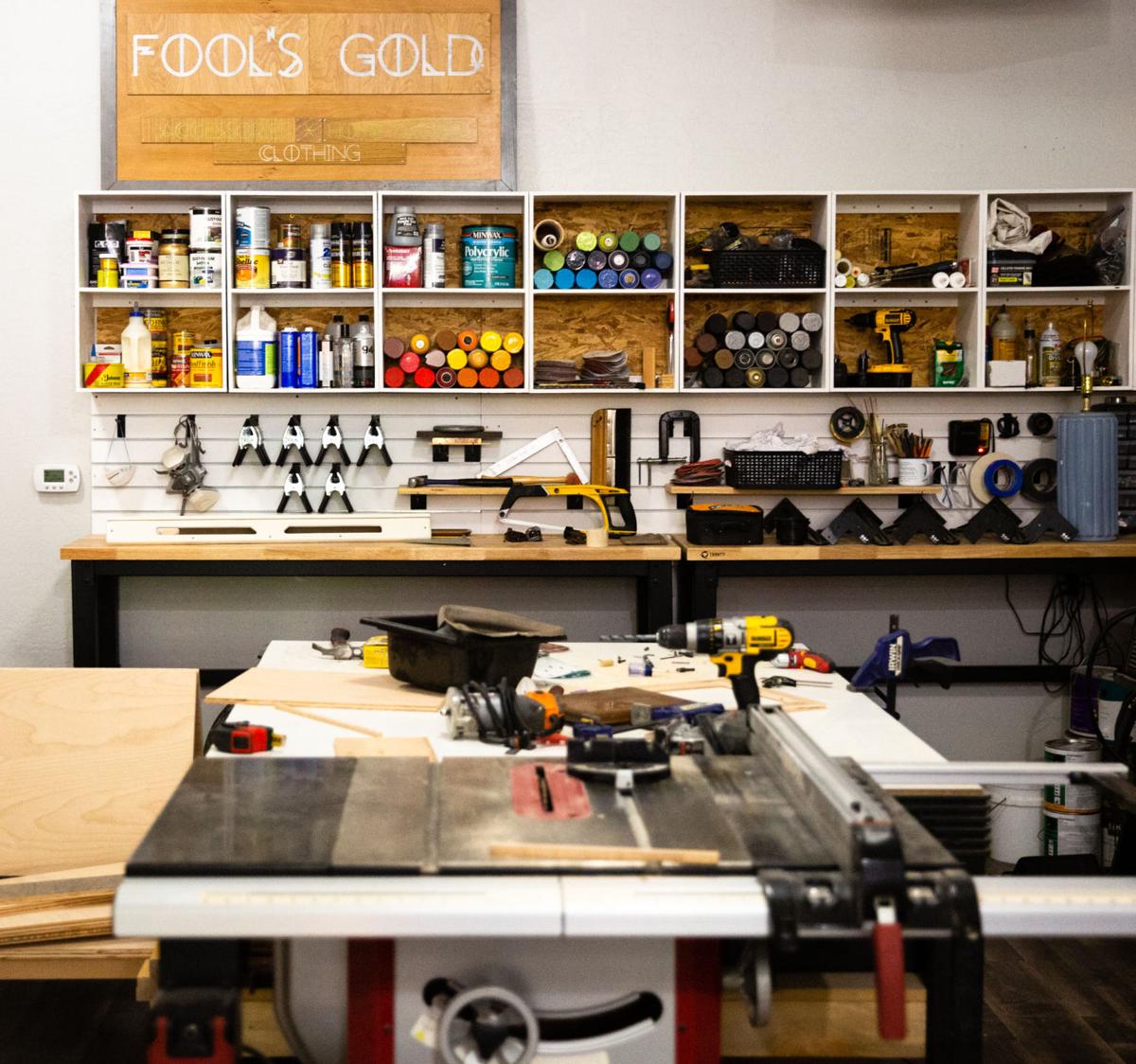 Workspace in the back of Fool’s Gold where Meredith Butler creates jewelry and furniture pieces, Sept. 29.

Meredith Butler in front of her Fool's Gold boutique, Sept. 29.

Ava Miller in the entry way of her work space, Sept. 27.

Seven pairs of earrings made out of old bicycle tires by Ava Miller, Sept. 27.

Workspace in the back of Fool’s Gold where Meredith Butler creates jewelry and furniture pieces, Sept. 29.

When one thinks about clothing and jewelry, the idea of them being sustainable may seem hard to grasp. However, one lesser known way to promote sustainability comes in the form of local artists who make jewelry from a wide variety of sustainable materials. These local shops and artists use their work to raise awareness about being sustainable within the ever growing Flagstaff community, while selling customers something they can enjoy wearing.

Fool’s Gold owner Meredith Butler creates and sells sustainable jewelry in her boutique. Butler said she had the idea Fool’s Gold while studying architecture in college. She incorporated sustainability into her work because she was learning about it in her classes and knew she needed to address it in some way. Butler and her boyfriend, Micheal Murphy started the business together.

“We started Fool’s Gold and set out to challenge the current jewelry and fashion industries,” Butler said. “We chose to use alternative materials to the standard diamonds, gemstones and gold, while using our platform to spread awareness about the negative impacts of these industries.”

The materials Butler uses for her jewelry line include wood that is sustainably harvested in Finland. The suppliers they work with ensure the metals used aren’t harming the environment when they’re being mined. They also certify that the fabrics used by clothing brands they carry leave less of a touch on the environment, and the packaging is both recycled and recyclable.

When it comes to creating designs for her jewelry, Butler draws inspiration from both art and architecture from a variety of regions and historical eras. She tries to design something new every day on the brand’s Instagram. Butler said the new pieces she tries to come up with daily are typically based on something or someone she encountered throughout the day.

“I loved the modern feel of her jewelry and the fact that the material wasn’t the focus, just a means to an end,” Butler said. “It was such a natural fit for the store, and I’m thrilled to be a part of her journey.”

Miller creates a variety of earrings out of recycled bike tubes, which she gets from Flagstaff Bike Revolution. She sells them at other places downtown in addition to Fool’s Gold, as well as on her Etsy shop.

She decided to start this project because she would always make art out of glass that she found in a lake near her hometown in Wisconsin. She later found the inspiration to create earrings out of bike tubes because she is a mountain biker, and her boyfriend works at Flagstaff Bike Revolution. This gives her an endless supply of bike tubes, especially because the tubes get thrown away if they’re punctured.

“When a tube is punctured, there is this white, powdery stuff on the inside, so I cut up all the tubes and wash them with warm water and dish soap,” Miller said. “I either keep them in tube form or make them flat — it depends on what kind of earrings I’m making.”

She said she has always been the outdoorsy type and wanted to become more sustainable during her junior year of high school after attending an environmental school in northern Wisconsin called Conserve School. Classroom sessions took place outdoors, where she said she learns best.

Miller is majoring in special and elementary education and plans to incorporate environmental lessons into her future classroom because it is important for children to see the effects they have on the environment.

She said her overall goal is to get people excited about recycled materials and get her product into as many stores as possible.

“I feel like people are super materialistic, and even my earrings are contributing to that,” Miller said. “However, people can be materialistic about sustainable things too. I want to change the perspective on that.”

Butler said her goal is to spread awareness and educate people about sustainability while selling something customers can relate to. She said she wants customers to learn about being sustainable through buying earrings and that they’ll think of the impact their purchase has on the environment, or will at least tell someone else about it. Part of spreading that awareness comes from the boutique donating 10% of profits to causes ranging from environmental and ethical issues to local outreach programs.

Both Miller and Butler said sustainability has high value in their everyday lives. For Butler, every decision she makes throughout the day is centered around sustainability, even though it can be difficult sometimes.

“Occasionally I want cute knick-knacks for my home from Target,” Butler said. “When I pick it up in the store, I think about the impoverished hands that made it, the designer they knocked off to steal the design and the precious and limited resources that were stripped from the Earth to create this throw-away item. Then I no longer need it or want it.”

Miller said she finds it frustrating when she has to throw out her trash bin multiple times a week, and she often wonders if she is getting full use out of a product before she has to throw it out. She said it’s important that individuals understand they can save money and time by being sustainable.

Butler and Miller also offered advice to students and community members who want to get involved with being more sustainable. Butler said to simply buy less and choose well. She said researching the companies they buy from to confirm the CEO’s and the company’s ethical values align with their own is a great way to be conscious of environmental decisions. She also suggested getting involved with the community through volunteering to aid with ethical or environmental projects.

Miller said people think being sustainable is harder than it actually is. It’s about making smart choices, such as switching out regular plastic bags for reusable ones like she did.

NAU alumna Jill Sans owns The HeArt Box Gallery in downtown Flagstaff and sells Miller’s sustainable earrings, as well as other sustainable art made from recycled materials, such as plastic and vinyl records.

“[Miller] brought in this pair of earrings, and I couldn’t believe it,” Sans said. “I thought they were so incredibly elegant and beautiful.”

Sans eventually asked Miller if she wanted to keep some of the earrings in the gallery to sell, thus creating the partnership they have now.

“It’s a good price point for people, and they get something cool, but they’re also supporting someone who’s trying to get on their feet in the business,” Sans said.

Overall, both Butler and Miller want to encourage students and community members alike to try to be more sustainable in their everyday lives whether, it be through purchasing one of their products or making small changes in daily routines.