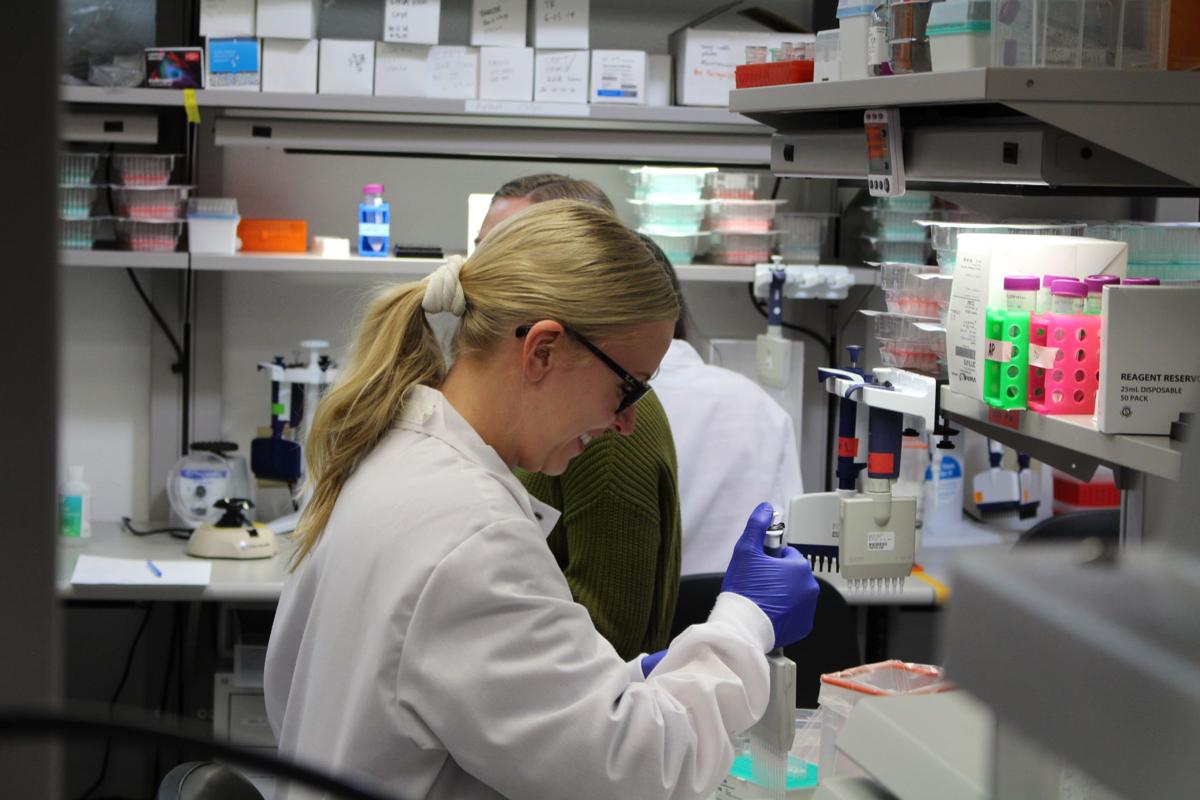 A scientist at TGen North working with co-workers in one of the nonprofit's numerous labs, Feb. 5. 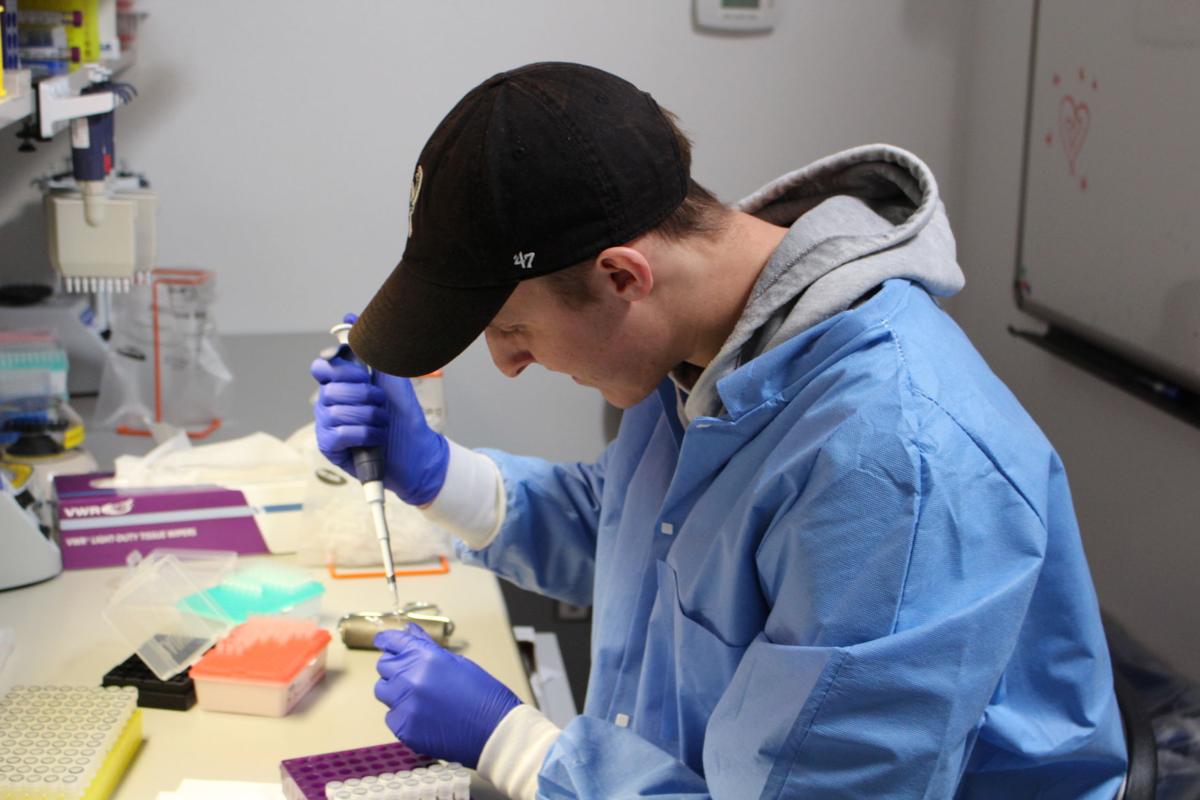 A scientist at TGen North working with co-workers in one of the nonprofit's numerous labs, Feb. 5.

The Translational Genomics Research Institution (TGen) is working to develop highly accurate and precise tests for the novel coronavirus (2019-nCoV). These tests, which are designed and advanced by numerous researchers, compare the genomes within 2019-nCoV to other strains of the coronavirus, including the common cold, Severe Acute Respiratory Syndrome (SARS) and Middle East Respiratory Syndrome (MERS).

David Engelthaler, Ph.D., the co-director and associate professor of the Pathogen and Microbiome Division at TGen North in Flagstaff, said the original human genome project orchestrated TGen’s creation as a nonprofit research facility headquartered in Phoenix. Since 2002, the nonprofit has worked on research to support and enhance medicine, public health and biodefense, which includes recent studies related to the 2019-nCoV.

Engelthaler explained the 2019-nCoV is one of seven coronavirus strains. Researchers at TGen compare the exact genomic composition of the 2019-nCoV — with the precise order of the Gs, As, Ts and Cs in the DNA alphabet — to other strains of the illness. By using this methodology, TGen can accurately confirm or reject the presence of the 2019-nCoV, and they can also monitor its genomic progression over time.

“This is how we can be very precise,” Engelthaler said. “We know exactly what strain we’re looking at, and we can also see any mutations.”

Engelthaler also referenced fatality rates and the potential for communicability. He explained that SARS, which developed in 2002, inflicted a 10% fatality rate and was highly communicable, making it a dangerous virus.

In contrast, MERS, which developed in Saudi Arabia in 2012, had a staggering fatality rate of 35%. However, it was also decidedly noncommunicable, limiting any significant spread. Finally, the 2019-nCoV has proven its communicability between humans, but it also has a current fatality rate of only 2%.

Engelthaler elaborated that SARS, MERS and 2019-nCoV are the three dangerous strains of coronavirus. These viruses started within other animals — presumably bats — and eventually transferred to humans. The 2019-nCoV, which originated in Wuhan, China, likely spread through animal markets before infecting humankind.

Engelthaler said the other four strains of coronavirus are common colds usually found in the upper respiratory system. Over time, humans have adapted to these prevalent viruses, subsequently making them unthreatening. The 2019-nCoV, however, is dangerous because of its recent development and unique genomic structure.

“We have this virus that we’re not ready for — that we’re not adapted to — that has the right combination of genetic sequencing that allows it to invade human cells and cause a much more serious disease than the normal coronavirus,” Engelthaler said.

Engelthaler added that as the 2019-nCoV evolves, scientists are unable to predict its exact mutations. However, by utilizing population analysis techniques that examine 2019-nCoV’s genomic structure, researchers can begin to forecast the frequency of these adaptations. Although studies are still being conducted on the 2019-nCoV, Engelthaler said TGen will likely establish a timeline of its future progression.

“Every single strain is being sequenced, and we’re going to be able to see those changes,” Engelthaler said. “That’s going to allow us to put a molecular clock on this virus to better understand it going forward.”

Engelthaler said TGen developed tests for the 2019-nCoV within seven days of its outbreak. However, these tests must undergo rigorous regulatory processes, which are overseen by the FDA and often conducted through clinical trials.

Engelthaler added that diagnostic tests commonly take six to 18 months to approve for official and regularized use, and drugs often take years.

Despite the difficulty of sampling and approving diagnostics, these tests can be run through advanced computer networks. Engelthaler said the invention and implementation of these digital systems has transformed TGen’s research in recent years.

“The advancement of the science and the technology today allows us to rapidly develop and start to screen these tests in silico,” Engelthaler said. “We can do a lot of validation within our computers.”

Engelthaler also addressed 2019-nCoV’s potential spread, both within the United States and around the world. Public health communication and awareness are invaluable, he explained, especially in places like China, where the 2019-nCoV has infected thousands.

“Public health messaging is critical,” Engelthaler said. “It’s everything your mom and your doctor says: Wash your hands, stay home when you’re sick, use hand sanitizer. They really slow down the amount of flu spread and common colds, and they will work for coronavirus as well.”

For example, old and common viruses — like the flu — are predictably devastating each year. Engelthaler said the flu kills approximately 30,000 people annually, and it has already caused over 10,000 deaths this winter. Despite the prevalence and danger of the flu, it is a familiarized part of society, unlike the 2019-nCoV.

“Fear is the real contagion,” Engelthaler said. “The virus is there, absolutely, but the fear spreads faster and can sometimes cause more damage.”

As a genomic research institution, Engelthaler said TGen is equipped and eager to study these illnesses. Additionally, with modernized technology and over 40 employees, the nonprofit is prepared to respond both efficiently and effectively.

“[We’re the] genomic first responder,” Engelthaler said. “It doesn’t take months or years. we can respond today for whatever the need is.”

With 2019-nCoV continuing to make headlines around the world, TGen is actively working on diagnostics, analytics and research behind the scenes. Further updates will be provided as necessary.