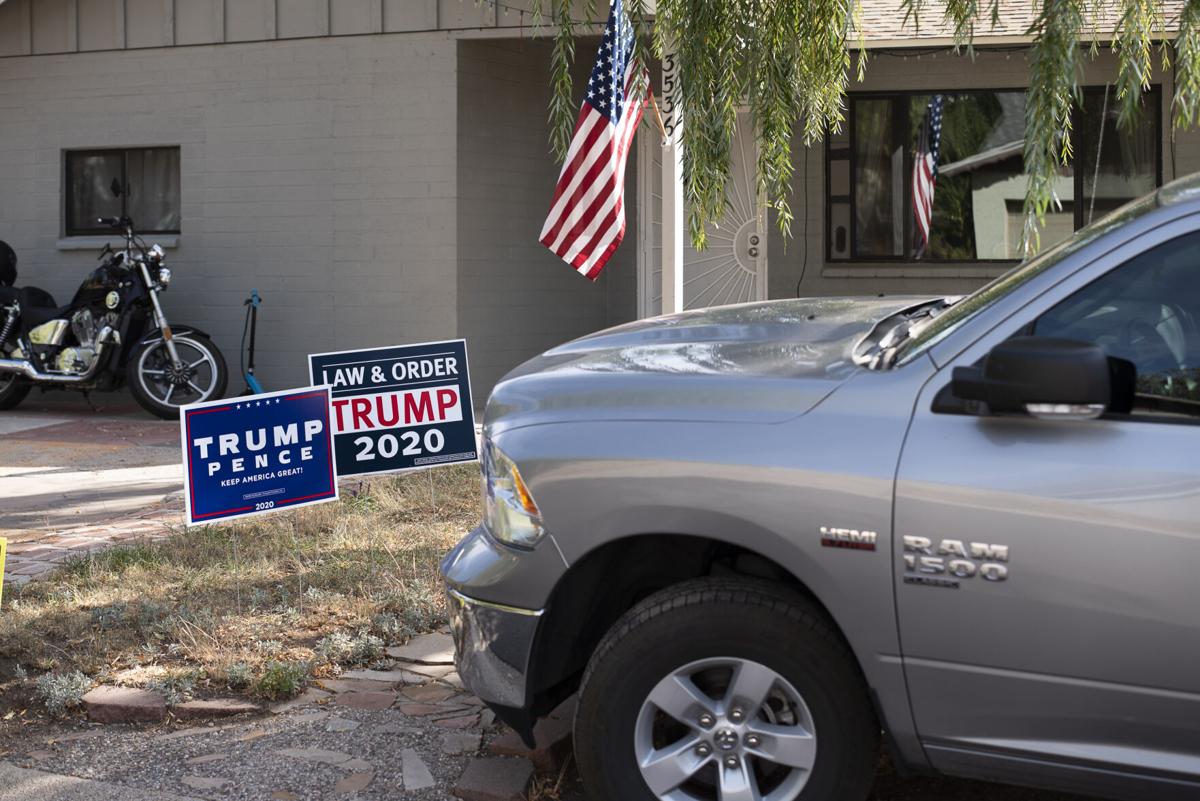 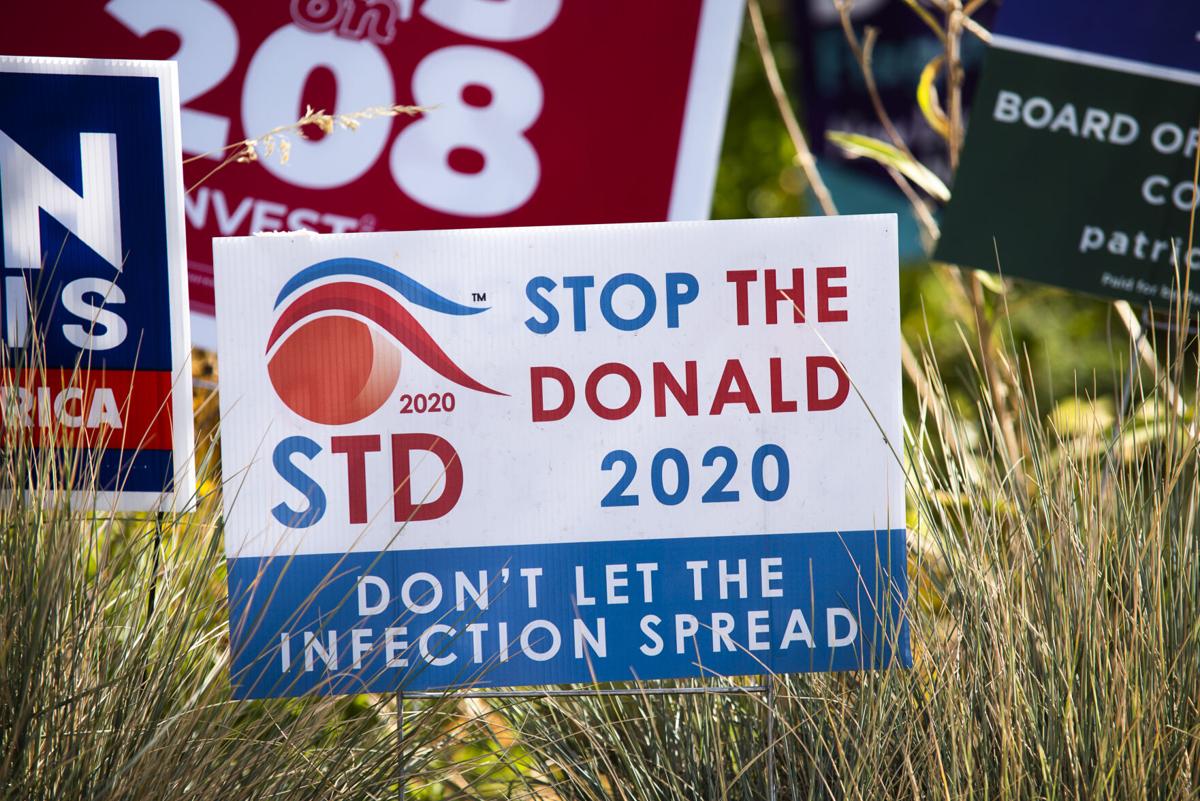 A sign placed by Keith Schaafsma showing her discontent with President Trump stands in her yard, Oct. 8. Schaafsma found the sign on Amazon.com and also got one for her neighbor.

A sign placed by Keith Schaafsma showing her discontent with President Trump stands in her yard, Oct. 8. Schaafsma found the sign on Amazon.com and also got one for her neighbor.

As the general elections approach, Arizona could make a historic swing from a red, Republican-dominated state to a blue, Democratic one. This anticipation comes as the Democratic nominee, former Vice President Joe Biden, leads President Donald Trump in both statewide and national polls.

According to The New York Times, Biden held a 49 to 41% advantage over Trump in recent Arizona polls, and if this advantage carries into the general elections, it would be the first time the state voted blue since 1996. Furthermore, the Senate race also shows Democrat Mark Kelly leading Republican Sen. Martha McSally.

“I think younger generations like NAU students will certainly contribute to which candidate will win in our state,” Heitland said. “Younger people are paying much more attention than they did a decade ago.”

Despite coronavirus-related setbacks and restrictions, Heitland said she hopes students will continue to pay attention and support the Democratic nominee, even though Coconino County Democrats cannot hold any in-person events.

In 2016, young people ages 18 to 29 voted more Democratic than Republican by a 58 to 28% margin, according to a report by the Pew Research Center. Although these voters did not affect the previous election’s results, an additional 37% more young adults voted in the 2018 midterms.

Sophomore Jacob Carter, secretary of NAU Young Democrats and vice president of finance for the Young Democrats of Arizona, said he suspects younger generations will have an immense impact on the 2020 election.

“I was only 15 years old during the 2016 presidential election,” Carter said. “I could not vote, but I still followed the election very closely. Needless to say, I was dismayed at the outcome and felt powerless to do anything about it. I know many young people were in the same position in 2016, but now, four years later, the majority of us have turned 18 and we have become a huge voting block in Arizona.”

Following the Trump administration’s response to the COVID-19 pandemic, in addition to mail-in voting and extended voter registration until Oct. 23, Carter thinks Arizona is on track to set record numbers of youth voter turnout.

“NAU students have to make their voices heard, not only for the sake of our entire country, but also to make sure Arizona’s legislature flips blue so we can see more investment into our public universities,” Carter said.

The New York Times also suggested the party change is developing beyond the presidential election, with the state senate race between former astronaut Kelly and current Sen. McSally. Kelly was already reported to secure a strong lead over his Republican competitor.

In contrast to the young voter turnout, Pew Research Center reported “older voters” — ages 65 and up — favored the GOP and constituted approximately one-third of all voters in 2016. Additionally, their representation was nearly three times larger than the 18- to 29-year-old demographic.

“We have had some events on Saturdays for Students for Trump,” Divelbiss said. “People like Charlie Kirk, or even Donald Trump Jr. in Phoenix, will speak to us and motivate us before the election.”

Kirk is the founder and president of Turning Point USA, a movement that allows over 250,000 students to be youth activists for the Republican party.

Students for Trump is the fastest-growing student organization around the country, according to its website, which holds media and informational assets that they said reach millions of students every year.

“I see Trump being favored in Arizona right now from the polls I have seen and from fellow club members,” Divelbiss said. “Young voters will have a big impact, and I do believe they have a huge role in Arizona’s change.”

According to another statistic published by The New York Times, only six out of 10 people actually end up voting, with 40% of people choosing not to. While education generally increases political knowledge and engagement, the factors that drive an individual to pursue education may be the same ones that lead to participation in politics.

Senior Lindsey Wilson said the statistics in this year’s election do not really matter due to the general election’s candidates.

“I have absolutely no desire to vote, and I know people think that I am not helping the problem, but the whole situation is the problem,” Wilson said. “After the presidential debate, everything I had questioned got verified so that I can’t choose between either candidate.”

Wilson also mentioned she understands 2020 has not been easy for anyone, especially through a pandemic, civil unrest and racial divides plaguing the United States.

“It is almost like an election during this time would be ridiculous, making people make a decision with the world being as it is,” Wilson said. “In my opinion, I think people who are educated should vote and people who are undecided should sit out this one.”

With the general election quickly approaching Nov. 3, Arizona could play a crucial role in who wins the presidency. To register to vote, go to ServiceArizona.com before Oct. 23’s deadline.