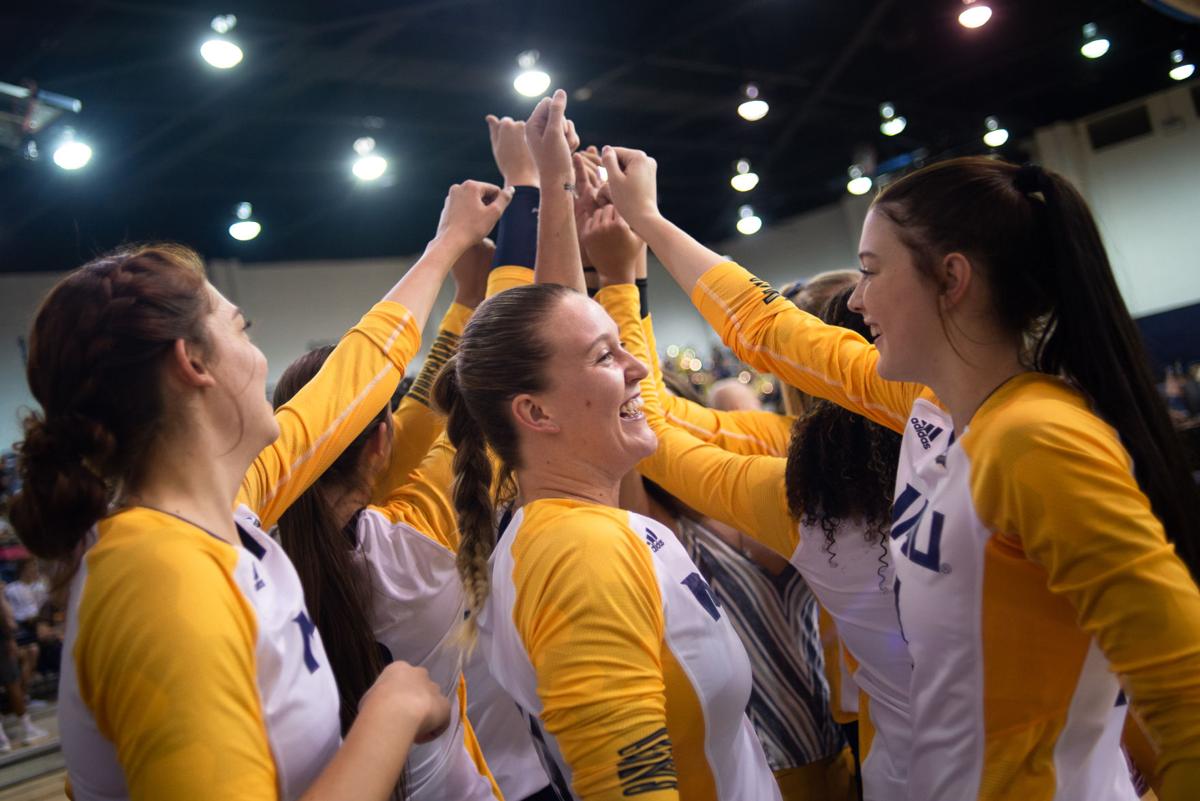 NAU Volleyball gathers together before their matchup against LSU at Rolle Activity Center Sept. 13, 2019. NAU defeated LSU in three straight sets in Friday’s matchup in the Lumberjack Classic. (Photo by Michael Patacsil) 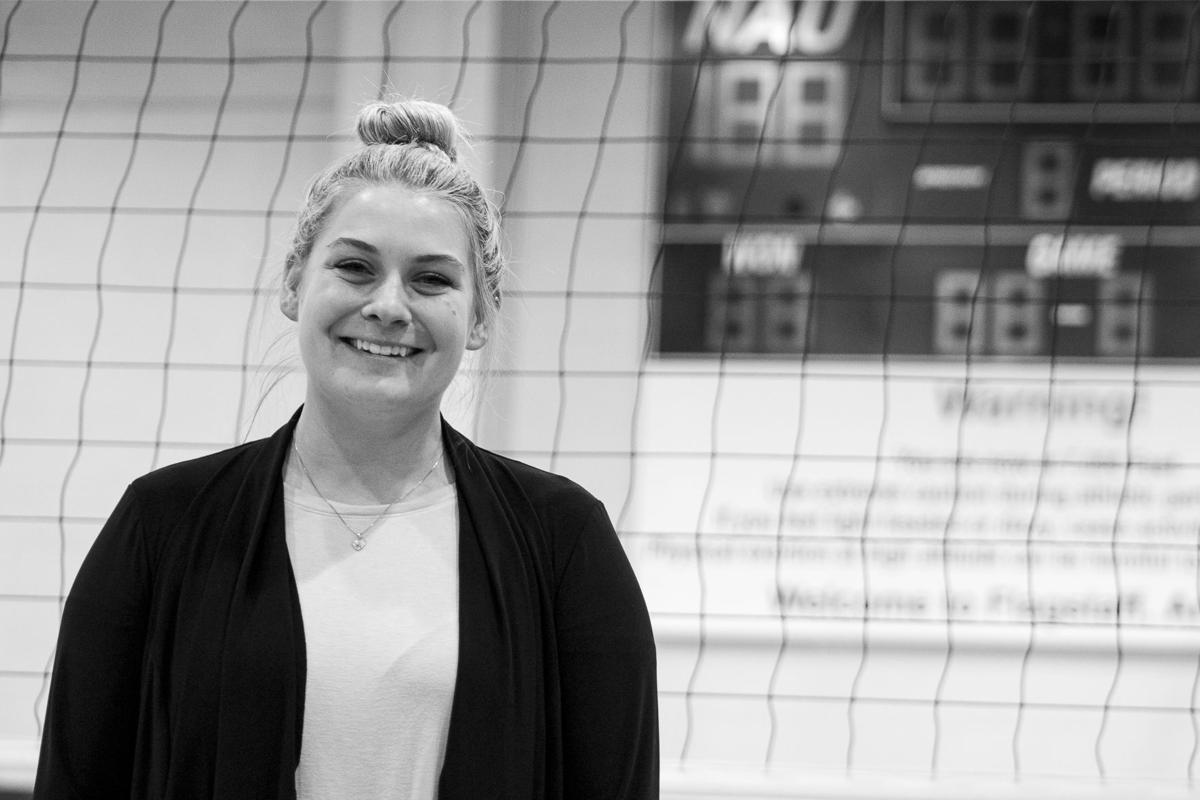 Amanda Bock returned to NAU this July as Assistant Athletic Trainer for the Women's Volleyball team after finishing her master’s degree in 2018. Bock is traveling with the team this week as they take on Idaho and Weber State Universities, Oct. 29, 2019. (Photo by MacKenzie Brower)

NAU Volleyball gathers together before their matchup against LSU at Rolle Activity Center Sept. 13, 2019. NAU defeated LSU in three straight sets in Friday’s matchup in the Lumberjack Classic. (Photo by Michael Patacsil)

Amanda Bock returned to NAU this July as Assistant Athletic Trainer for the Women's Volleyball team after finishing her master’s degree in 2018. Bock is traveling with the team this week as they take on Idaho and Weber State Universities, Oct. 29, 2019. (Photo by MacKenzie Brower)

The glossy court glistened under the fluorescent lights as the NAU volleyball team rushed out of the locker room. It was game time. Assistant athletic trainer Amanda Bock stood courtside, hoping no one would get injured. The sound of squeaky sneakers bounced off the gym walls as senior middle blocker Victoria Ewalefo leapt to hit the ball over the net. As her feet hit the court, a sharp pain rippled through her knee, and Bock ran to her aid.

Bock rushed Ewalefo to the training room to conduct a careful evaluation of her knee. Ewalefo successfully performed a series of squats and running exercises, but she did not return to play.

“Everything felt pretty stable,” Bock said. “She just had a little pain with it. So, I decided then that I didn’t think anything super serious was wrong with her knee.”

Throughout her career, Bock has made mistakes and experienced the overwhelming victory of helping an athlete heal. Sometimes the extent of an injury is not always apparent. This was the case in Ewalefo’s injury. Two days after Ewalefo’s physical evaluation, it was clear that the injury was more serious. An MRI revealed a tear in her ACL, which ended Ewalefo’s 2017 season. Bock was defeated. Every athlete dreads an ACL injury.

Hershey reassured Bock that it’s easy to miss an ACL tear. No one is perfect, and that is why medical imaging exists. Even though Bock faced some personal apprehension, Ewalefo trusted Bock to help her with rehabilitation.

“Going through an injury is actually more of a mental battle than a physical battle,” Ewalefo said. “Amanda was there for me along the way — helped me stay positive and push through. She made me realize how strong I am.”

Ewalefo’s injury was a turning point in Bock’s career. It taught her that mistakes are inevitable, and she became a better, more experienced athletic trainer because of it. She developed a tight bond with a resilient athlete as she stuck with Ewalefo through appointments and surgery. Bock provided more than physical support, consoling her when she was anxious or frustrated. She never left Ewalefo’s side and watched her conquer her debilitating injury.

The intricacies of the human body have always fascinated Bock, and her passion for helping others is infinite. When she was younger, she wanted to be a nurse, so she shadowed her sister, Kristen Mayberry, in the intensive care unit at Providence Saint Joseph Medical Center in Burbank, California.

“Literally the moment I walked into the hospital, they were intubating someone, so I was like, ‘OK, never mind,’” Bock said. “It was too intense, and I knew that’s not really what I want to be doing.”

But Bock knew one thing for sure: she wanted to help people. At a young age, she was a natural, independent leader. She played golf, rugby and was the captain of her equestrian drill team. Whether she was on the field, in the arena or spending time with family at the lake, her compassion touched the hearts of everyone around her.

Her mom could not agree more but said she can be commanding when she needs to.

“She’s giving and kind, but she can come across as a hard-ass when she needs to be in charge,” her mother, Lisa Bock, said.

In high school, football was Bock’s favorite sport to watch and work with. She took a sports medicine course and fell in love with it.

Bock’s college experience was her first time away from her home in Castaic, California. She attended a community college there, then transferred to Fresno State University for two years. After earning an undergraduate degree in athletic training, she earned her master’s degree at NAU.

Bock worked with the Nova Southeastern University volleyball and softball teams in Florida for one year before returning to NAU as the women’s volleyball assistant athletic trainer. Nova volleyball was a different dynamic than coaching the championship-minded NAU team. Nova Southeastern had a 6-24 season record in 2018. Bock saw consistent losses and injuries. Her experience in Florida taught her a lot, but when she received a job offer from NAU, she knew Flagstaff was calling her home.

Senior outside hitter Sydney Lema worked with Bock often and was thrilled with her return.

“This summer, our head trainer said, ‘I have a surprise for you guys,’ and I just had a feeling that Amanda’s coming back,” Lema said. “I was right. She’s back now, and our relationship is even stronger.”

Lema suffered an MCL tear during her sophomore year. Bock worked with her every day to get the swelling down, and Lema was back on the court in just three weeks. This year, Lema injured her shoulder in the first week of the season. After consistent massage treatment, resistance exercise and weight-training rehab with Bock, Lema regained strength in her shoulder and is back on the court again.

“Amanda knows I always want to play, no matter if I’m hurt,” Lema said. “I’m hurt a lot, because I dive around and stuff, so I’m always getting treatment. Amanda’s really important to me.”

Bock is more than an athletic trainer. She is a friend, role model, inspiration and support system for team members.

“I can be that constant factor where they can come and talk to me and vent about anything or get advice,” Bock said. “I’m someone they can trust, who is always in their corner.”

With the help of head coach Ken Murphy, Bock created an ankle prevention program to reduce the risk of player injury. The program entails after-practice activation exercises, such as dynamic hopping, single-leg calf raises and stabilization exercises, that increase in intensity each week. Since the implementation of this program, ankle injuries have been almost nonexistent.

“She has a lot of input in the decisions we make about our players,” Murphy said. “We feel her impact every day.”

For Bock, one of the most rewarding parts of the job is watching the athletes make small victories in their recoveries, but the biggest satisfaction of all is seeing athletes return to play.

“I love NAU, and this is honestly a dream job,” Bock said.