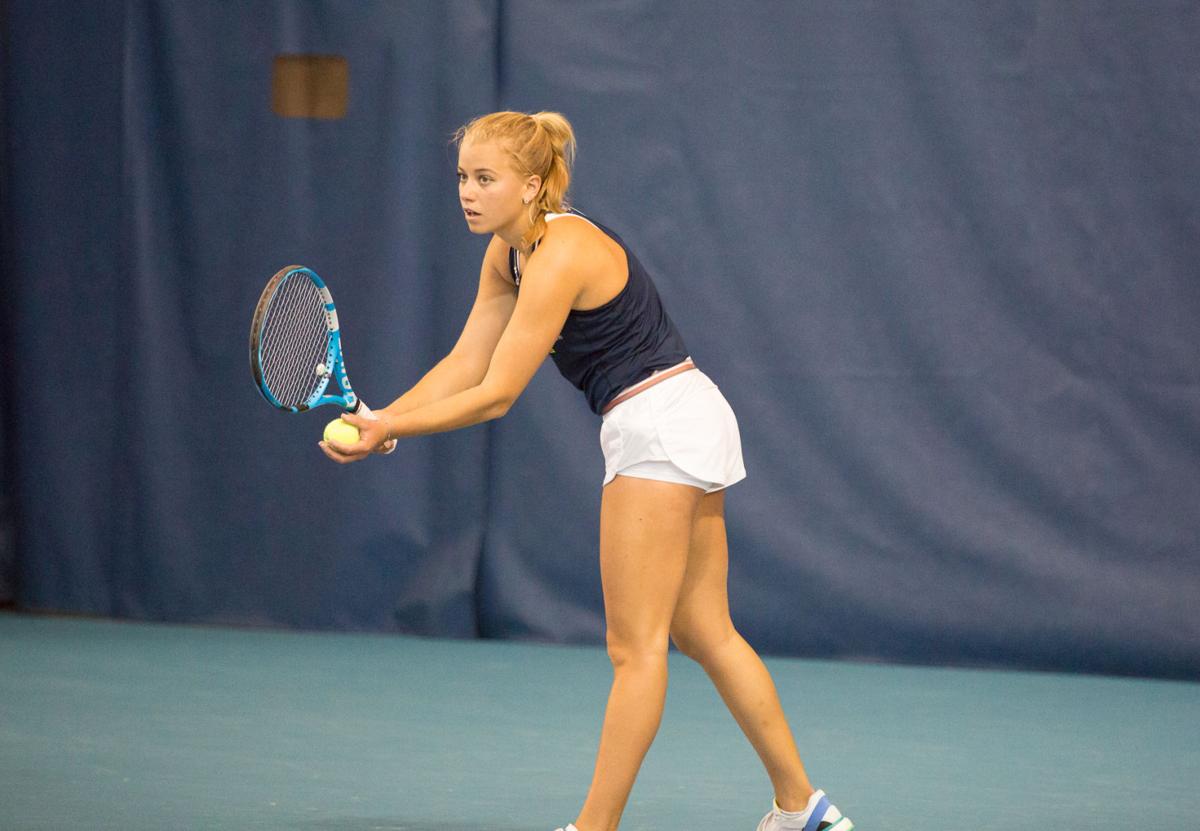 NAU Junior Chiara Tomasetti sets herself for a serve during a match against Portland State March 30, 2019 at the Aquatic and Tennis Center. 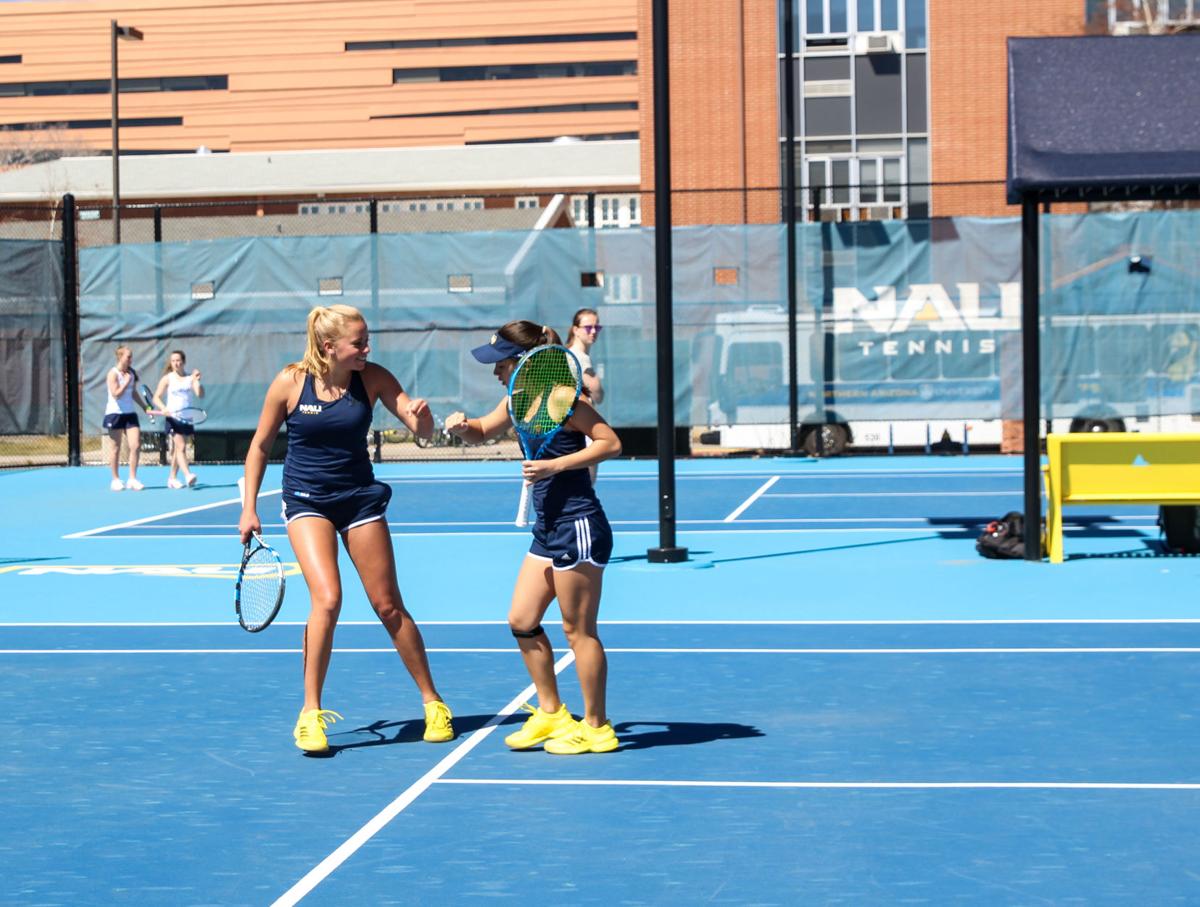 NAU freshman Madi Moore and sophomore Chiara Tomasetti celebrating after getting a point on doubles against Montana State at the Aquatic and Tennis Center March 30.

NAU Junior Chiara Tomasetti sets herself for a serve during a match against Portland State March 30, 2019 at the Aquatic and Tennis Center.

NAU freshman Madi Moore and sophomore Chiara Tomasetti celebrating after getting a point on doubles against Montana State at the Aquatic and Tennis Center March 30.

College graduation day is a day to celebrate a major achievement after long strenuous hours of school work and many anxious moments of making an 11:59 deadline. Students dress in their best outfits and to officially seal the deal, they wrap themselves securely in their graduation gown.

The cap goes on last because it's like the cherry on top of a good sun(day). Unfortunately for the class of 2020, they will not get to walk across the stage hearing their name being chanted and shaking the hands of their college mentors.

“Coming all the way from Germany that’s what you see in all of the highschool and college movies from the states. That was my dream,” senior tennis player Chiara Tomasetti said.

Due to the effects of the COVID-19 pandemic, NAU President Rita Cheng decided to “cancel the scheduled in-person Spring 2020 Commencement.” But that wasn’t the only devastating news Tomasetti received that week. On March 18, the Big Sky conference decided to end the remainder of the spring sports season, therefore ending Tomasetti’s college career.

“I didn't want to believe it,” Tomasetti said. “Short after that I kept telling myself I will never have a senior day. I will not have my last college match… I can't even organize all of my thoughts and I’m so sad at the same time.”

Looking back at Tomasetti’s three and a half years at NAU, there are not many athletes who have made the impact she has made in a short period of time. She ended her season off holding the program all-time high ranking in the country in 44th place.

She was only the fourth lumberjack to be voted Big Sky Most Valuable Player and the first to earn the ALL-Big Sky First Team Singles award for her third straight time. Tomasetti held a record of 66 singles wins in dual matches and holds the best dual match winning percentage with 86%.

These are just a few of the many accolades. Assistant Coach Jordan Gobatie said not only has Tomasetti helped change the future of the NAU Tennis program, but she has “sent waves throughout the entire Big Sky Conference and Mountain Region.”

One of the most pivotal moments to date for NAU and for Tomasetti’s career was during last year when Chiara clinched a Big Sky championship for her team during the last match of the season. Tomasetti went head to head with three time Big Sky MVP from the University of Idaho Mariana Petrei who she played during the regular season and couldn’t beat.

Petrei being the pinnacle of success in the region was undefeated in her four years playing in the Big Sky Conference, that was until Tomasetti showed her dominance on the court. In the final minute, Tomasetti was able to win the match and NAU’s first Big Sky tournament title in 20 years. Coach Gobatie describes it as something out of a fiction book.

“For Chiara to play the way she did, against the best, sent a message to the entire country that herself, and NAU Tennis, are a force to be reckoned with,” Gobatie said. “I've never been more proud of one of my student-athletes than I was that day.”

Being the best didn’t just mean beating the best, Tomasetti became a Big Sky Champion through patience and a lot of hard work. During her four years of training at NAU, Tomasetti’s coaches helped her become the tennis player she is today by spending time with her on the court, day in and day out, sometimes after practices were over.

Tomasetti put in the extra time to improve her craft even if it meant missing some of those sweet college moments with her friends and peers. Coach Gobatie said no matter what Tomasetti was going through she never lost her drive and motivation to be the best.

What her training at NAU has taught her, was to “trust the process” and that good things come to those who work hard and wait. The ultimate key to success though was to stop comparing herself to other athletes and start trying to become a better version of herself.

“I started looking less at my competition,” she said. “I wanted to play my best tennis on that day and I wanted to be better from the day before.”

Since Tomasetti’s season was cut short, her biggest fear was that she didn’t make enough of an impact. She hopes people will remember her and the accomplishments she made at NAU.

Gobatie said there’s no question that people will remember Tomasetti’s name. Future NAU tennis players are going to be spending much of their college careers chasing her records and trying to become an athlete of her kind. Tomasetti’s focus and ability to execute her coaches' game plans are some of the many strengths that sets her apart from the rest.

“Chiara Tomasetti is a once in a generation athlete for NAU,” Gobatie said. “She raises her level in the most important of situations and pushes through the tough moments. It's a trait that is rarely seen and is a testament to her potential to become a professional athlete.”

Gobatie said coaching Tomasetti was an experience of a lifetime to be a part of the journey was an honor. COVID-19 can take away her senior year but there’s no doubt she will still go down as one of the greatest athletes in NAU history.

Tomasetti is back in Germany and is focusing on finishing her senior year of college online. She plans on playing in professional tournaments after she gets her degree and will see where it takes her next.

From the busy streets of Germany to the rural Mountains of Flagstaff, Tomasetti was grateful for everyone who made her dreams possible. She was most grateful to be given the opportunity to play for her Lumberjack family.