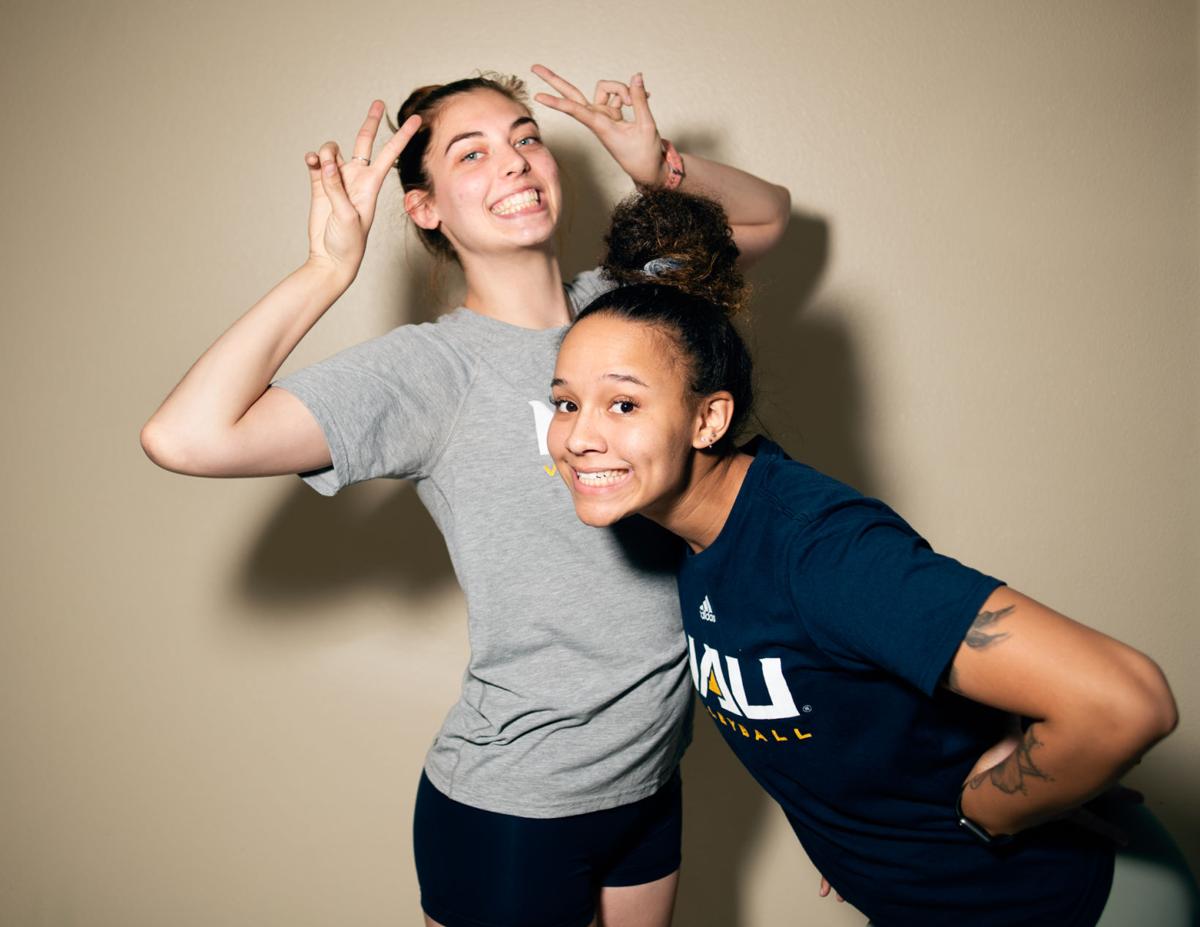 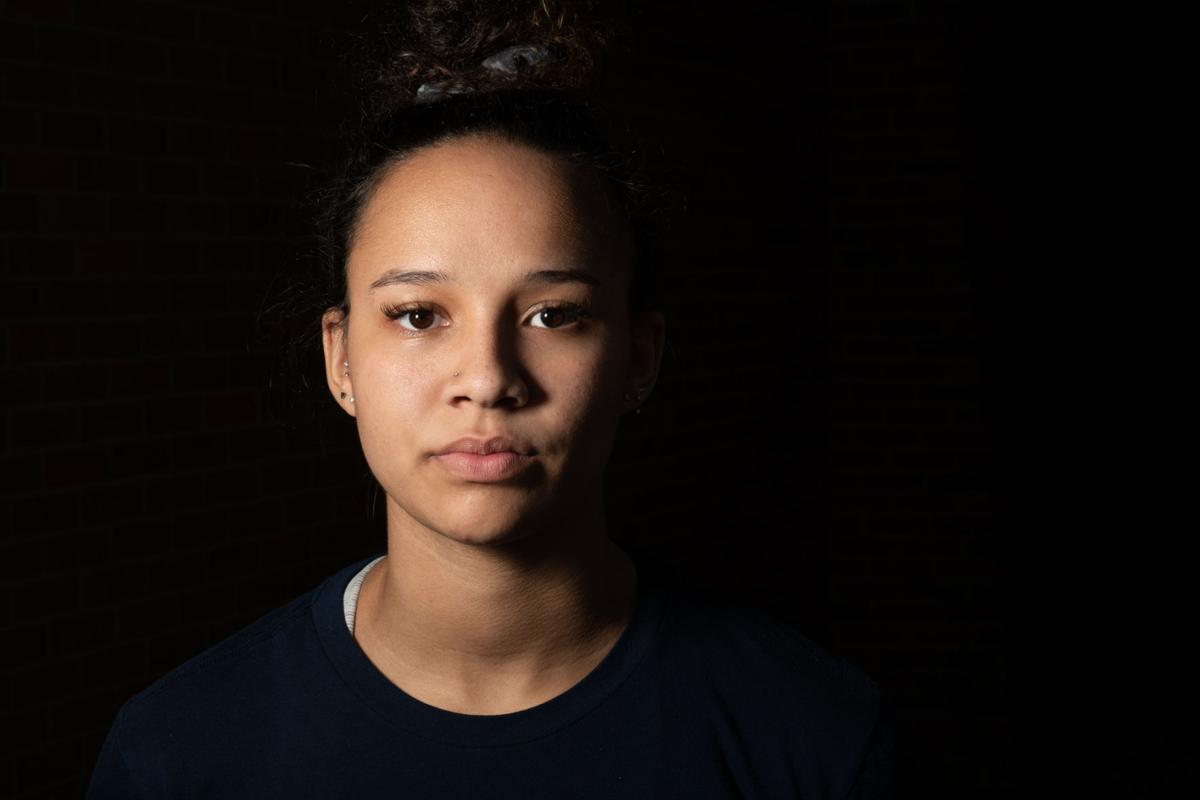 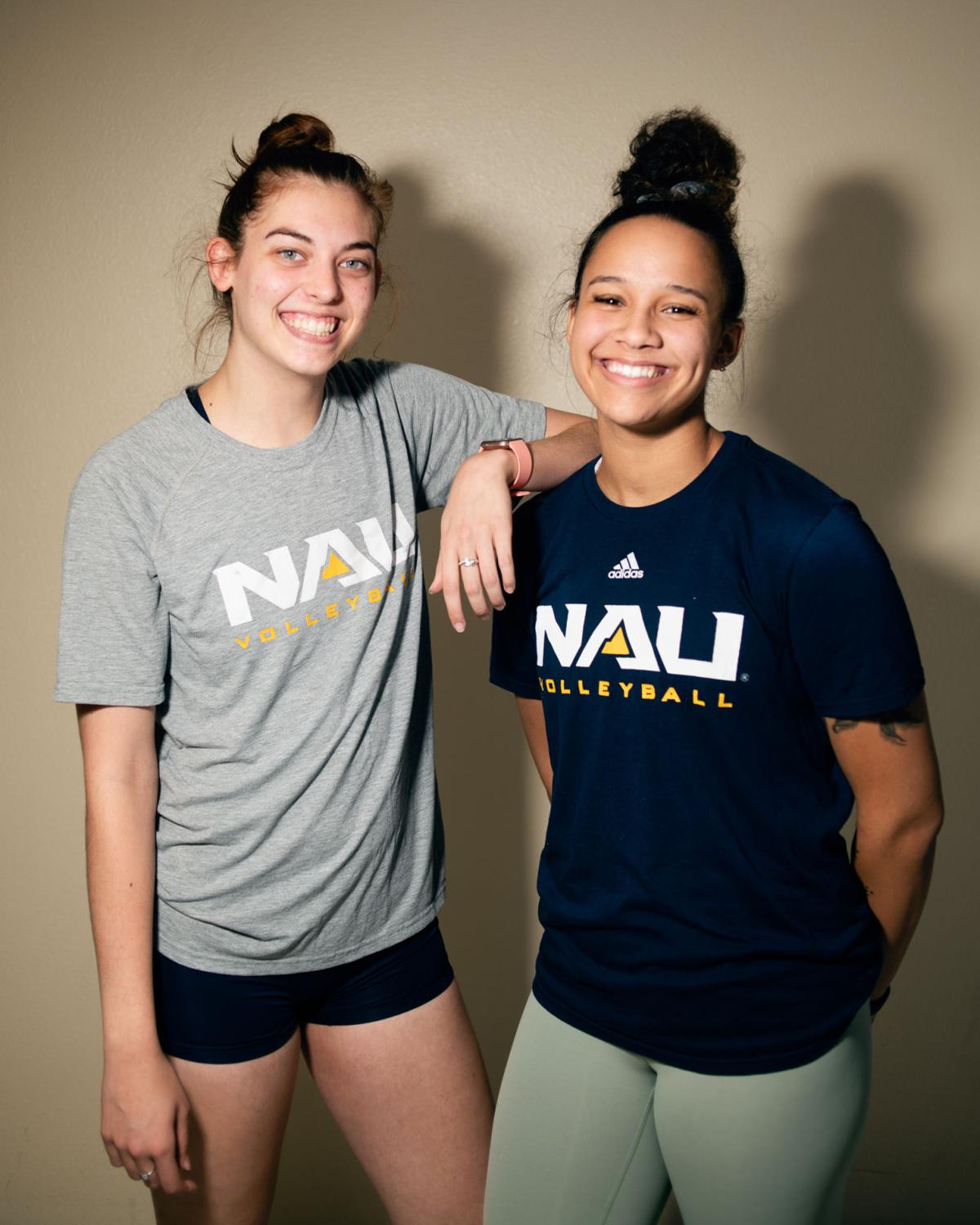 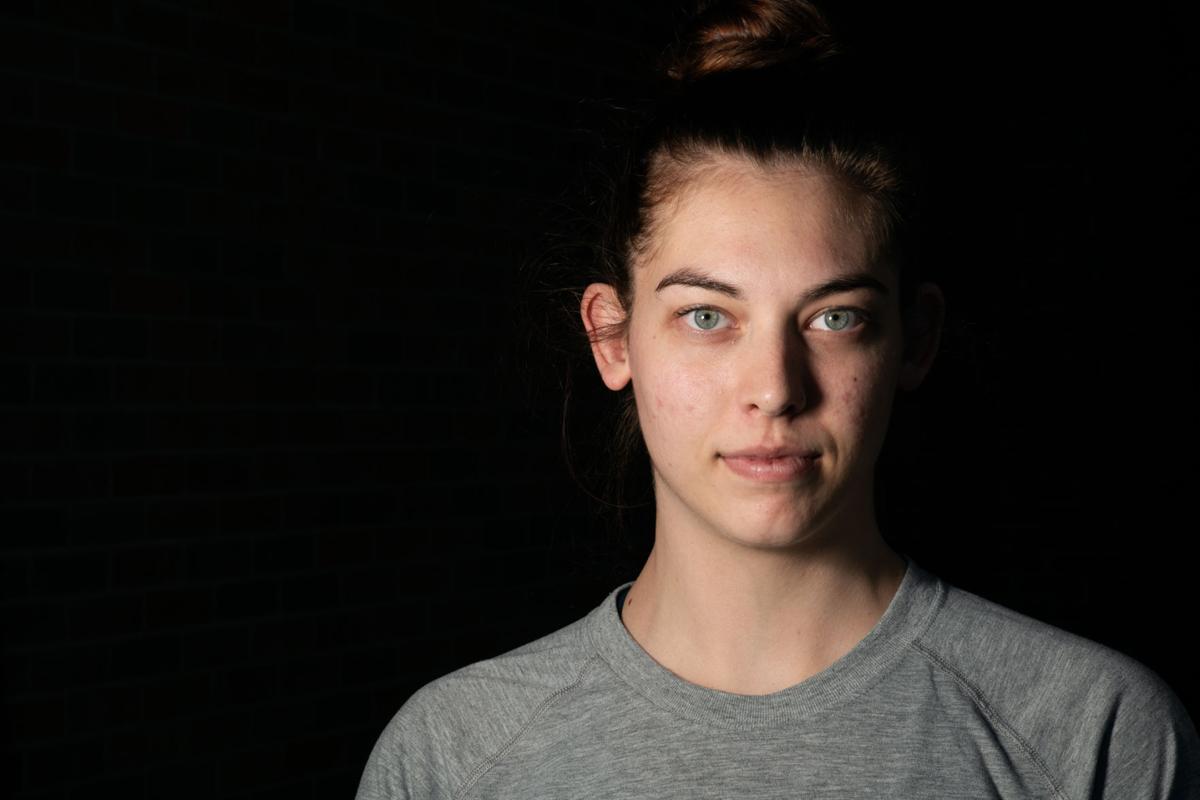 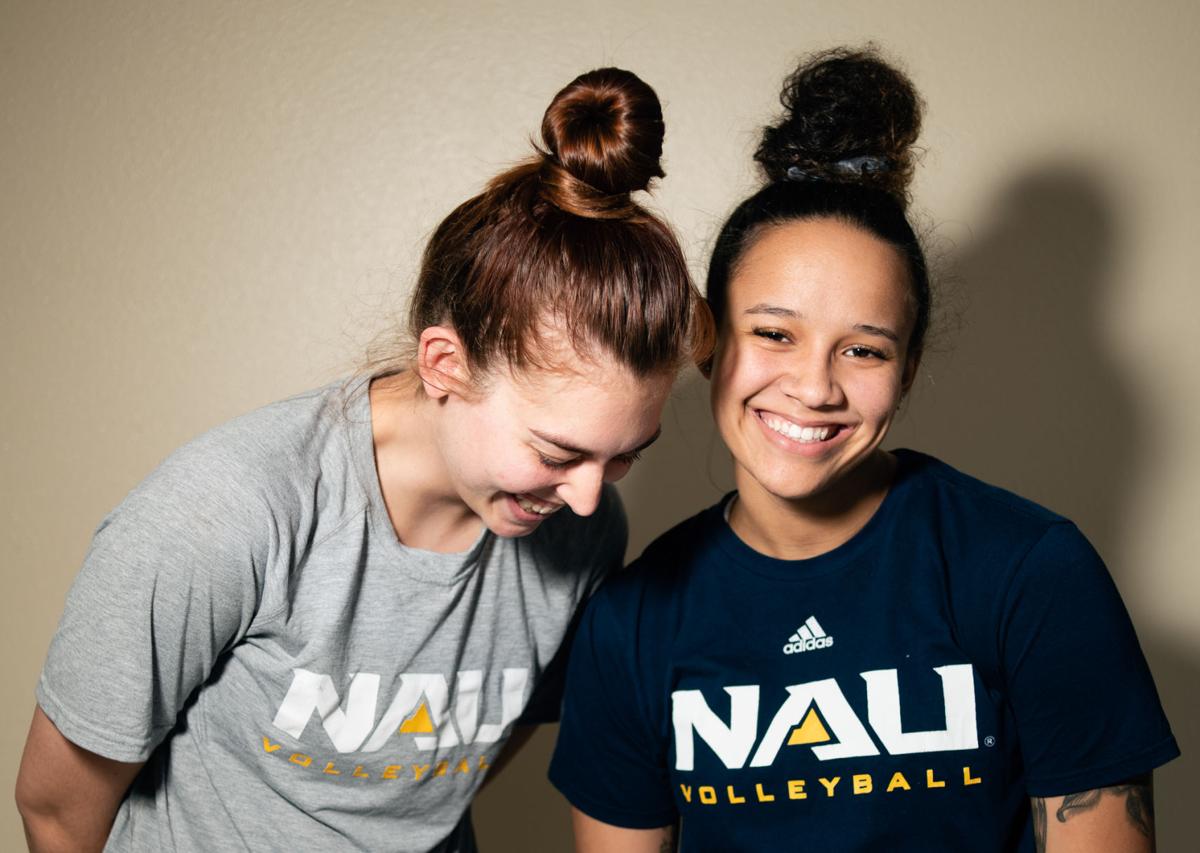 No matter who they compete against, whether it is a nationally ranked team across the country or a conference competitor at home, the NAU women’s volleyball team poses a threat to any team that crosses its path. At the offensive head of the Lumberjack roster are senior middle blocker Abby Akin and junior opposite hitter Heaven Harris, who have shined as two of NAU’s most crucial assets both offensively and as leaders for the young, up-and-coming squad.

“We are a really young team this year, with only three seniors playing and mostly freshman on the court,” Harris said. “I think it’s just something that’s a learning process for everyone.”

For both of NAU’s vital team members, their story begins nearly two hours south in Phoenix. Both Harris and Akin were born in the valley and showed promise early in their high school careers. Harris was a four-year starter at Hamilton High School and received Arizona All-State Honors as an opposite hitter in 2016. Akin was also a four-year starter, who compiled an impressive resume with over 320 kills while at Chapparal High School.

Both being dominant players at their own high schools, Akin and Harris crossed paths before their arrivals at NAU, having played each other through club volleyball leagues in the valley. Akin did not remember much of that time but could recall a couple details about her teammate.

“She had pink hair back then, so I do remember her that way,” Akin said. “She was a stud then and she still is.”

Akin’s choice to attend NAU had an interesting background with a family legacy that not only gives her support, but motivation to get better. Both of Akin’s parents graduated from NAU in the early ‘90s and were college athletes during their time in Flagstaff. Akin’s father played basketball and her mother played volleyball.

With Akin following in their footsteps, she said it’s special to see her family up in the stands every time she gets to play at home in the Rolle Activity Center. Akin said she finds both gratitude and drive when she hears her family cheering her along through each home set.

“When I see [my dad] in the stands, I feel like I’m playing for him and playing for my family, who’s gotten me to the point of being who I am on the court today,” Akin said.

Akin’s motivation shows promise, and she has climbed the national rankings this season on both sides of the net, holding the No. 11 spot in total blocks across the nation with 85 and No. 16 for blocks per set at 1.44.

Not only is Akin ranked nationally on a defensive level but she has also received national recognition on offense, ranking No. 11 in the nation and leading the Big Sky in hitting percentage, at .428 with 168 kills. She has averaged 2.56 kills per set on the season. Harris trails closely behind Akin with the second most kills, at 149 on the season, while averaging 3.10 kills per set and proving herself a dominant offensive threat for the Lumberjacks.

The two upperclassmen shine as leaders of the Lumberjack squad. Their impact as two of the team’s most crucial assets can be found in more places than just the stat book.

“[Akin and Harris] bring such positive energy to our team every single day,” head coach Ken Murphy said. “They’re obviously very accomplished players, and their skills kind of carry us at times. But when they’re performing, their energy is kind of infectious for everybody. It helps everyone relax, boosts some confidence and makes us feel we can play at a very high level just by the way they carry themselves.”

Their energy is no secret to NAU fans either. With an extremely competitive nonconference schedule, the young squad faced No. 15-ranked University of Michigan. The Lumberjacks later came across other teams that have been known threats on a national scale.

No matter the team, these two do not shy away from the competition and prove to be vital components to the Lumberjacks’ performances against larger Division I schools.

Harris has shown her offensive prominence by putting up big numbers throughout the season. This included a season high of 18 kills against La Salle University and nine matches with 11 or more kills. Akin has etched herself in NAU history as No. 1 in program history for hitting percentage at .383.

Akin has received high marks this season. In addition to her record hitting percentage, she also ranks No. 5 in total block assists at 316, as well as No. 5 in blocking average at 1.09.

For both players, as well as the rest of the team, it is important to keep a level head throughout the wins. Despite record-breaking performances, the Lumberjacks are 10-8 for the season and snapped a three-game losing streak against the University of Montana after being handed losses from Portland State University, Sacramento State University and Montana State University. Nearly halfway into their conference schedule this season, Akin said there is plenty the team can improve on as they approach the season’s final stretch.

“When we play big schools, we play really well,” Akin said. “We need to get better at playing not so good schools and still staying the same.”

Harris said one major focus is about not getting complacent and keeping a level head no matter who the opponent is.

“What’s a little tough is that we do undermine schools sometimes in our conference … the schools in our conference are super competitive just like us,” Harris said. “They just didn’t schedule their preseason as hard as we did. Staying consistent and making sure that we’re playing the same regardless of who’s across the net is something that we’re all trying to work on.”

When working around a young team, Akin said confidence is key.

“It’s important to help instill that confidence in [the younger players], especially on the court,” Akin said. “It’s definitely difficult, but I think with anything it’s a learning process, and we’re just trying to get better and better with that.”

The Lumberjacks defeated Montana 3-2 Saturday. The young team seeks to spark a turnaround effort as they begin their fourth weekend of conference play against the University of Idaho Oct. 17 in Moscow, Idaho.