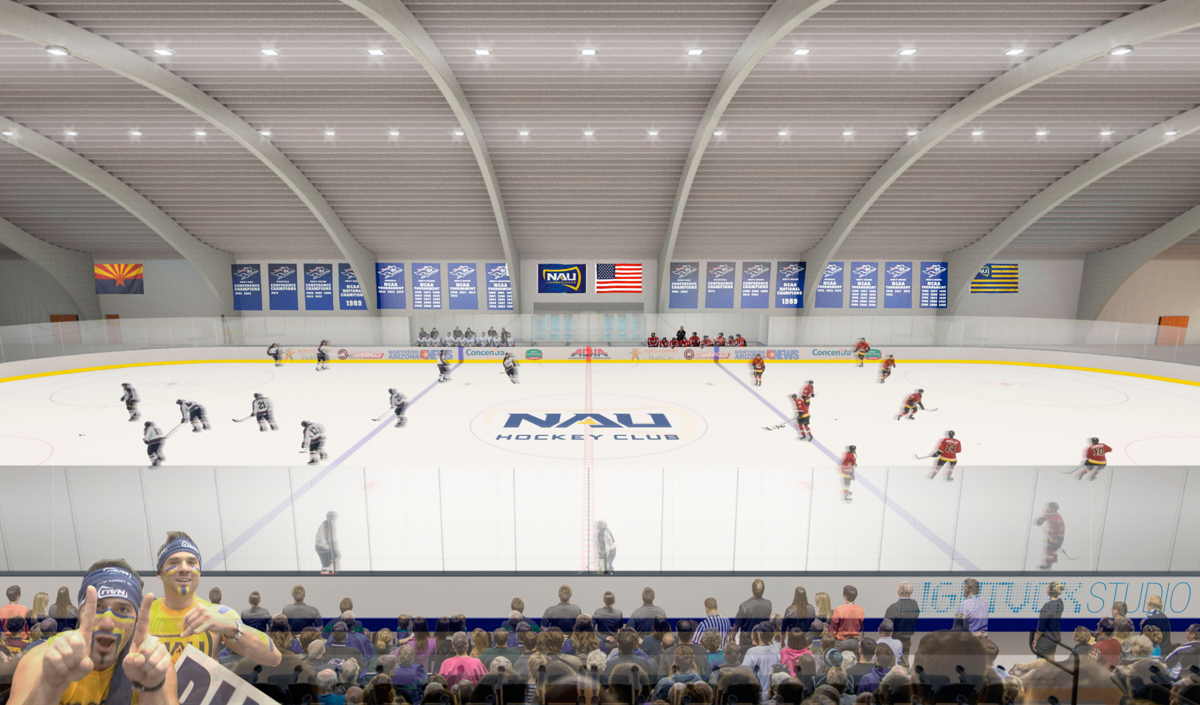 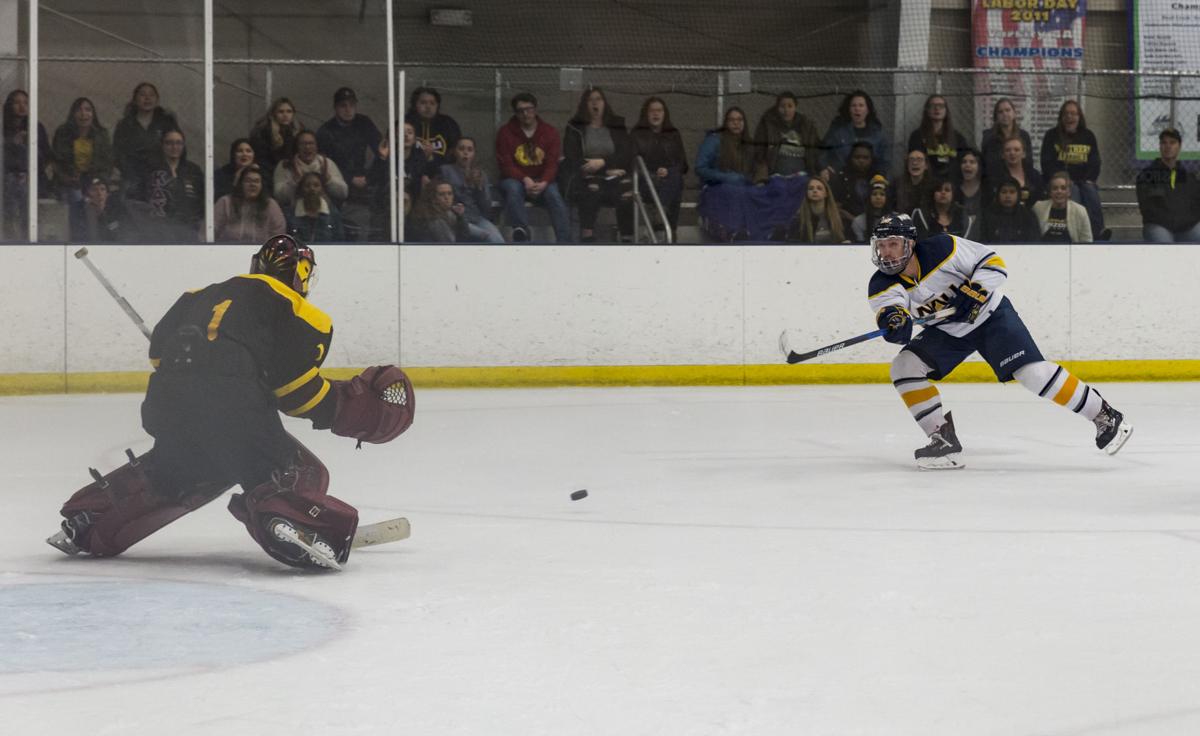 For sports fans, nothing can be more irritating than a referee blowing their whistle to halt a team’s momentum. A drive might look promising until it is whistled back to where the play started.

This feeling of frustration can apply to the NAU ice rink construction project.

With countless delays, it was easy to wonder whether a rink on campus would ever become a reality. However, Kris Walsh, the IceJacks director of hockey, said the ice rink on campus is back on track and that it could be completed by the end of the year.

“Tentatively we have been told by NAU leadership that the project will be completed by August [or] September of 2020,” Walsh said.

The ice rink will be located in the University Union Fieldhouse on north campus. The Division II and III NAU IceJacks currently practice and play at the Jay Lively Center, located 2.2 miles off campus. Walsh said $4.5 million has been dedicated to completing the project.

To complete the project, Walsh said the university has requested the NAU hockey club to donate $130,000 to help to complete rink amenities. These amenities include team benches, penalty benches, protective netting and glass for the boards. Additional amenities, including public restrooms and locker rooms, will also need to be completed.

Other hockey specific items will also be a leading conversation over the coming months, along with possible transportation of the equipment to Flagstaff.

“There will be several items that will need to be purchased, but those have not been determined yet,” Walsh said.

With the rink scheduled to be completed in less than a year, puck drops, bodies skating and crowds cheering will soon become a regularity on campus. Even still, past issues have occurred that have delayed the rink from being completed.

A project countlessly iced, but not terminated

Ryan Haar, the NAU IceJacks Division III head coach and Jay Lively Activity Center rink manager, heard rumblings of an ice rink on campus when he was an IceJacks player. The idea of not having to traverse off campus was great on paper because it would be a closer commute from class to the rink.

Haar said fundraising drives for the rink had gained traction and the rink was planned to be completed by October 2018. As the team started to get funds to help build the rink in the Fieldhouse, everything looked to be going smoothly. Despite this, the project kept getting pushed back year after year.

“Pretty much every year after that they pushed it back a year just because we did not have enough money available,” Haar said. “I do not know too much about it, but it sounded like the hockey club needed NAU support and NAU needed money from the hockey club.”

The stalling of the rink project caused outside donors to shy away. A project that had quickly gained traction was getting iced into another failed project that would only live on through the dreams of players and fans alike.

“Last year, there was a possible donation of $50,000 from the Arizona Coyotes that fell through due to the rink project being stalled out,” Walsh said. “When we picked up the pieces this fall, the funding was already allocated to the state organizations and we missed out.”

Additional problems that have led to delays have included the transformation of the Fieldhouse into a building that can house a functional ice rink. This includes fulfilling the lower temperature requirements needed to operate a rink.

For Thomas Eberly, the executive director of campus services and activities, the goal has been to complete an engineering design that maximizes sustainability and efficiency. However, the university was unable to meet these fulfillments.

“In the end, the combo project was not going to yield the return needed to make sense from an energy efficiency standpoint, but the process to determine the path forward was complex and took significant time nonetheless,” Eberly said.

Despite this substantial roadblock, the project looks to be gaining ground toward a solution. The Fieldhouse Multipurpose Facility (FMF) is looking to use the North Plant space to help accommodate the lower temperatures needed to sustain ice on the rink. The North Plant is located next to the Fieldhouse.

At times, even carpooling can be a struggle, especially once winter kicks into gear and snow starts falling. For Division III defenseman and captain Larry Yancy, commuting from campus to the rink in these conditions is dangerous.

“The major problem is that when it snows, there are high possibilities for people to slide off the roads and have serious injuries,” Yancy said.

Even without these problems, logistical issues are still prevalent, with some players having late classes that overlap with the IceJacks practice schedule.

“When we were practicing Tuesdays and Thursdays, we had a couple of kids who had class until 9:30 on Tuesday night and they would not show up to practice until close to 10:00. So, 45 minutes late,” Haar said. “Same on Thursdays.”

One benefit of a new rink is an easier commute to and from classes to practice. With a rink on campus, better commuting is possible, which alleviates potential travel concerns with weather and also means players will be able to show up to practice earlier. However, one of the primary benefits with a rink on campus would be better ice-time availability for both club teams.

The Jay Lively Center has to schedule ice times for club teams in addition to other programs and teams across town. The priority ice time goes to youth programs and high school teams to make sure neither groups are out late at night.

“Once we move on campus, the ice time should be more available … we should be getting priority ice slots, so right now ideally, we would practice at 6 a.m. every single morning because the first class in college is not until 8 a.m.,” Haar said. “So, if we practiced at 6 a.m. there is no reason everyone can’t get there and it is on campus, so you can shower up at the rink and then go to class right after.”

With more suitable ice times on campus, mandatory morning practices coupled with other skate times for the team could be possible, creating an increased opportunity for more practices that do not conflict with classes.

Perhaps the biggest benefit for the club teams would be the increased publicity and possibility of both club teams being promoted.

“This rink will bring the IceJacks club to a whole new level,” Walsh said. “We will be recruiting some really great talent with the upgraded facility plans and that could propel us to the next level. There are plans to move the two teams up in divisions once we move into the facility.”

Even with the new rink benefiting the club teams, it would not solely be used for hockey games and club teams. It would also be used for other activities students, organizations and clubs want to take part in. This makes the new rink an attraction every student at NAU can enjoy and be a part of.

Yancy said a new rink would only heighten the experience for upcoming students and current ones.

“I believe having a rink on campus will open up opportunities for not just the hockey team but also public skating options for freshmen, job opportunities and different on-ice clubs,” Yancy said. “The rink on campus would be the most beneficial thing for all aspects of NAU really contributing to the Lumberjack experience.”

With the new rink on track to be completed in less than a year, there is room for excitement, not only for the university but for the city as a whole. This excitement for hockey with a new rink could create endless bonds and relationships with the club teams, student body and city.

“It will be truly awesome to see the president of the university drop the first ever puck at the Fieldhouse with a packed crowd to watch NAU hockey,” Walsh said. “It would be awesome to witness and be part of. I am an NAU alumnus and it is so cool to see where the university and the club have come. Hopefully, we can continue to build this unique relationship.”