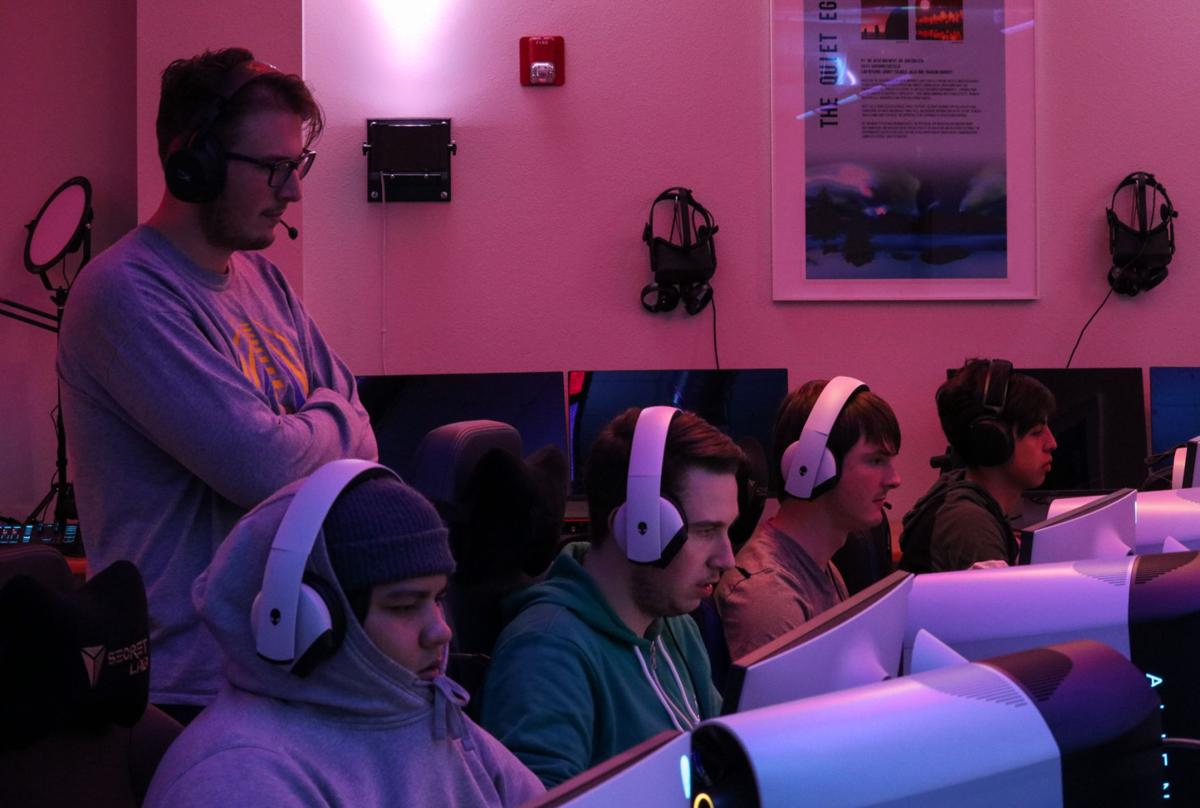 Members of the NAU eSports club play games in the Advanced Media Lab March 9. The NAU eSports club offers players a space to form friendships and grow academically in a cutting edge and competitive environment. (Photo by Morgan Fisher) 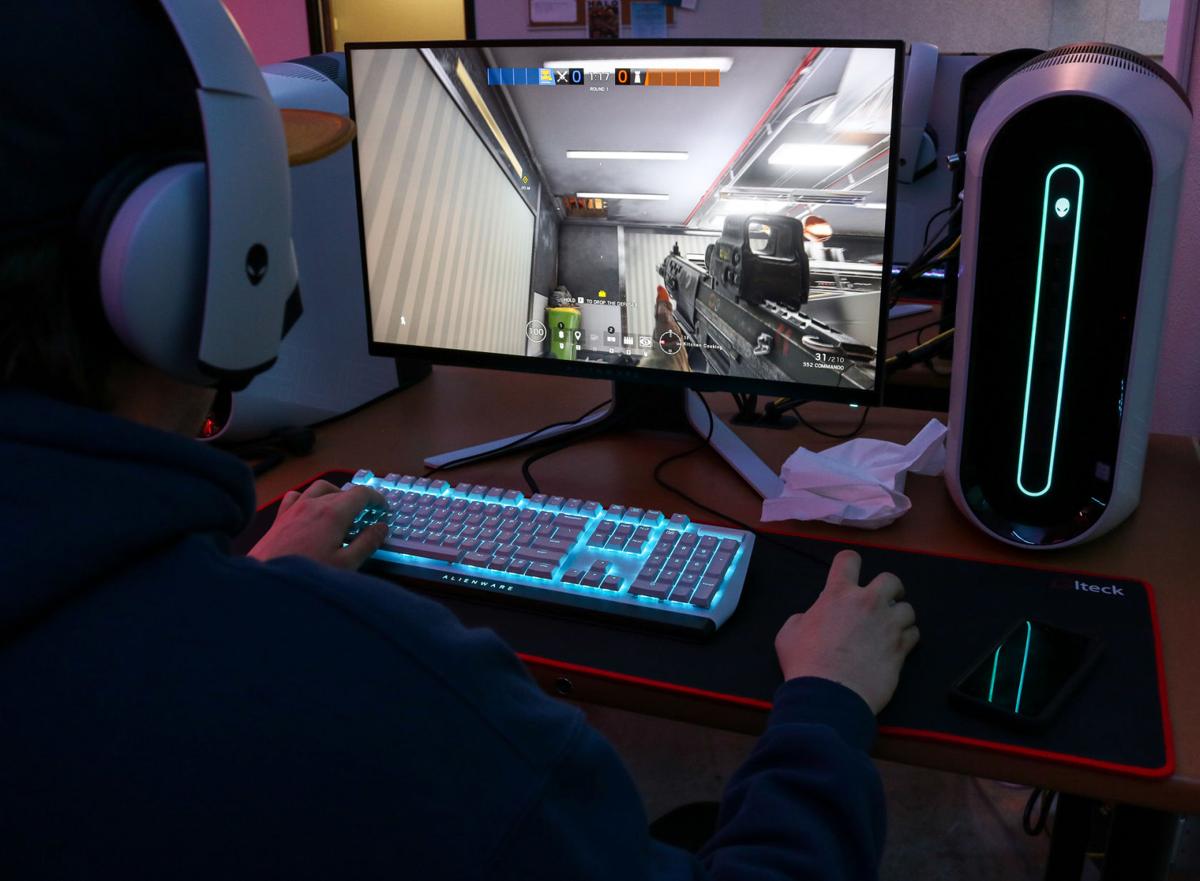 Members of the NAU eSports club play games in the Advanced Media Lab March 9. The NAU eSports club offers players a space to form friendships and grow academically in a cutting edge and competitive environment. (Photo by Morgan Fisher)

The days of couch co-op video games are numbered. Since the rise of internet gaming, more and more games released turn toward online multiplayer gameplay, which results in both good and bad effects on the gaming community. On one hand, gamers can connect and play with millions of people all over the world, but the face-to-face connections made from playing in the same room have been lost to time.

At NAU, through the means of esports, interpersonal connections are being restored one game at a time.

Esports is a type of sport that revolves around teams of people playing various video games in a competitive manner. The NAU eSports Club started out as a small club and has grown into a booming community that consists of players, advisers and fans that unite over the common interest of gaming.

Due to the recent opening of the Advanced Media Lab (AML), students have the opportunity to gather around a centralized location to play games and form connections.

Senior Anthony Danza, the game manager for Overwatch, has watched the club grow over time. Having been a player on the team before the structured nature it has now, Danza reflected on what is important in a team environment and how it used to be.

“One of the big things is cohesion and community environment,” Danza said. “When Overwatch was a really good team, we all were kind of toxic to each other. In some ways, it was good, in other ways bad, but we didn’t really have that interpersonal connection. If you thought of us as a team, I thought of us as players playing on a team. We weren’t thinking about what people might be doing or seeing their faces, and that should have been happening. We couldn’t easily and directly change things.”

Since moving to the centralized location at the AML, Danza is able to directly guide and help players improve without any messages being misconstrued. The individualized players started to turn into a well-oiled machine. Aside from the competitive atmosphere, Danza is grateful for meeting some amazing people.

“I think that the level of connection that I have with people here is really strong,” Danza said. “Even though a lot of my other friends that were on the original team graduated, the new people I have worked with this year have been really inspiring.”

Not everyone who is interested in esports needs to be on a team though. Junior Ian Sloan is an NAU eSports club shoutcaster for the League of Legends squad. Shoutcasting for esports is similar to any other type of sportscasting, where an announcer talks over a game to keep the audience in the loop while the action unfolds. Sloan started his journalism career in high school, continued it in college and hopes to cover events, like esports, in the future.

“It was an industry that I loved,” Sloan said. “I could enter it through a skillset I had already developed without needing to go completely blind into it.”

Thanks to NAU journalism and creative media and film courses, Sloan pursues his goals while taking classes.

The NAU eSports club has been growing over the last two years but really hit its stride with the arrival of the AML in the School of Communication. AML founding director Giovanni Castillo said the AML offers both an area for learning and experimentation, as well as an area for entertainment and competition.

Castillo has been searching for grants and scholarships to help foster growth of the AML, and as a byproduct, the NAU eSports club. Castillo is new to the concept of esports, but through the lens of a professor, he sees the NAU eSports club having serious potential.

“I like how zany all of the interconnections have become,” Castillo said. “At first we were thinking, ‘Oh, it’s Esports and the AML’, but it’s really not that. It’s all of the people interacting and working together. Their lives have become intertwined where they can’t distinguish quite between learning and playing anymore, which is the perfect way to learn.”

Senior Devlin Nipper, coach of the League of Legends esports team, also sees the perks of the NAU eSports club and the AML. Nipper grew up around his father playing arcade games competitively and has had it instilled in him that gaming is nothing to frown at. Instead, it’s a good means to experience competition and camaraderie.

“The esports program generally is a way for all these people at NAU that have these common interests in games or in competitions to bring their interests together in an environment that supports academic growth and personal growth,” Nipper said.

Nipper has helped lead the League of Legends team, the NAU LumberJax, to some recent victories in the 2020 Big Sky Conference, which is a tournament consisting of college esports teams from Arizona, Washington, Idaho, Montana, Colorado, Oregon, Utah and California. NAU LumberJax is ranked seventh of eight teams with three wins under their belt.

NAU President Rita Cheng had high praise for esports and the AML.

“I think that it’s a national interest,” Cheng said. “Having the esports and the gaming come into a social environment helps to bring attention to how much students really enjoy it, but also helps students to connect with people of similar interests, just like we do with all of our other clubs. I think that it’s wonderful to add a competitive component to it and I really like that the Big Sky jumped in to do that.”

Students looking to get involved in esports can enroll in several courses to both earn credits and gain experience in the program. These courses include different sections of CMF 251 and CMF 252, which allow students to learn more about running an esports team, how to shoutcast, public relations and management.