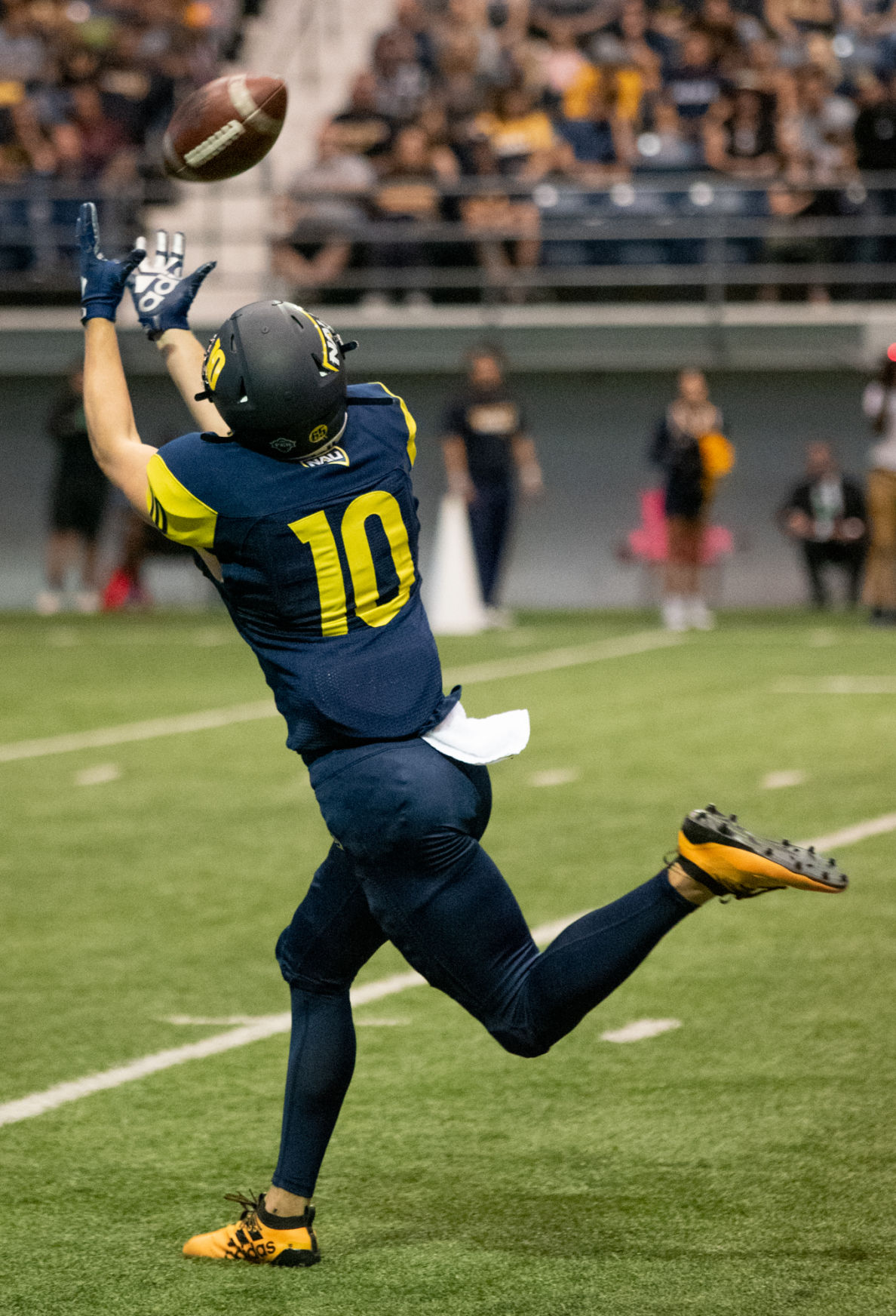 Freshman wide receiver Hendrix Johnson (10) catches the ball to score a touchdown against the University of Northern Colorado at the Walkup Skydome Oct. 5. (Photo by Brian Burke) 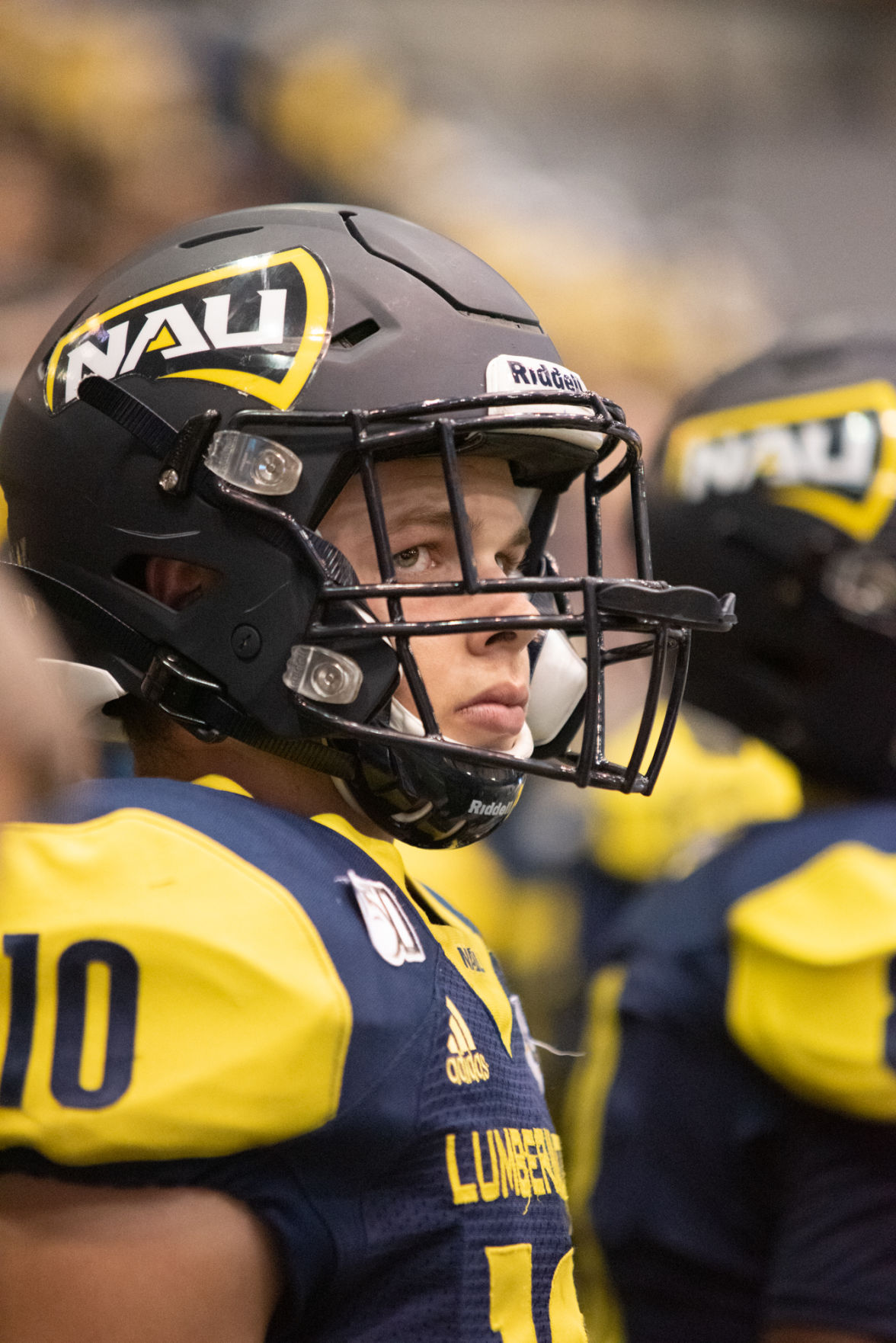 Freshman wide receiver Hendrix Johnson (10) catches the ball to score a touchdown against the University of Northern Colorado at the Walkup Skydome Oct. 5. (Photo by Brian Burke)

NAU’s high-scoring offense is averaging 38.7 points per game this year, and freshmen wide receiver Hendrix Johnson has been a large part of its success. The true freshman has become a leader on the Lumberjack team ever since he stepped into the program, and his coaches have great confidence in his ability and work ethic.

Johnson has been playing football since he was 11 years old, but he fell in love with the game before he strapped on the shoulder pads and ran onto the field.

“It was before I started playing tackle [football] watching my brother play over at UA,” Johnson said. “I went every weekend to watch him.”

Growing up in Phoenix, Johnson was a star at his high school, Boulder Creek. In 2018 he was honored by the Desert Valley Region as offensive player of the year along with being a first-team, all-Arizona selection for wide receiver.

Johnson had an impactful season his senior year of high school, where he had 20 touchdowns. He ended his high school career with 2,028 receiving yards, 106 receptions and 29 receiving touchdowns. In addition, he ran track and field in the offseason. He was an all-around athlete.

Johnson said having a support system can help an athlete reduce some pressure.

“My family, the people in my community and my coaching staff at Boulder Creek have been supportive throughout my career,” Johnson said.

Going from high school to college, the spotlight did not shift from Johnson. After six games starting for the Lumberjacks, Johnson has been able to haul in 30 receptions with 471 yards and two touchdowns. He is currently second on the team in receiving yards and receptions to junior wide receiver Brandon Porter, who has 554 yards and 35 receptions, right in front of him.

Johnson caught his first touchdown Sept. 28 against Montana State University from a accurately placed pass by senior quarterback Case Cookus. The 23-yard touchdown was a fade route that was placed right over the shoulder of Johnson, who knew he was going to catch it, and the feeling was one he said he’d been waiting for.

“I knew I was going to come down with it, because Case put it exactly where it needed to be, and it fell right in — a perfect ball,” Johnson said. “That was the greatest feeling in the world — finally getting it after five games. I get a good amount of yards and catches, but I wanted that touchdown bad so I could show that I can put some points up and support the offense.”

Since joining the team, Johnson’s confidence has grown. Despite his freshman status, he has become a leader within the program and among his other receivers. The coaches have noticed his work ethic since he joined the program, and they have grown confident with him since week one.

“He’s a great player,” head coach Chris Ball said. “He comes out here every day and works, and anybody who comes out every day is going to be successful.”

An athlete’s confidence level will grow as more success is attained throughout the season. There are times where this can cause an athlete to become more egotistical.

This is not the case for Johnson. Ball has always focused on the comradery within his program, and Johnson has taken this to heart, ensuring his success is always about the team and earning a leadership role for it.

“He came in, did all the work this summer and earned his spot,” wide receiver coach Junior Taylor said. “He is one of our leaders on offense.”

Stepping into a new program at a higher level can be nerve-racking, and sometimes it takes a while to feel comfortable. The NAU coaches have noticed that Johnson has been getting more comfortable throughout the season and have even given him a nickname.

“I call him ‘Steady Eddie.’ His confidence doesn’t go too high or too low,” Taylor said. “He just comes out and does his job every day. It’s that consistency that has helped him so far.”

Consistency is helping Johnson stay on track to be one of the top wide receivers for the Lumberjacks offense, averaging 5 receptions per game and 78.5 receiving yards. He is already having a better freshman season than Emanuel Butler, a New Orleans Saints practice squad player, who is known as one of the Lumberjacks’ best wide receivers of all time. In his freshman year, Butler had 13 receptions for 235 yards.

Johnson said the confidence in himself is formed through the coaches and teammates around him who he trusts.

“I am confident in my abilities, because I have amazing coaches, an amazing quarterback and amazing receivers around me,” Johnson said.

The Lumberjacks have six more games left in the regular season, with their next matchup on the road against Weber State University Oct. 19.