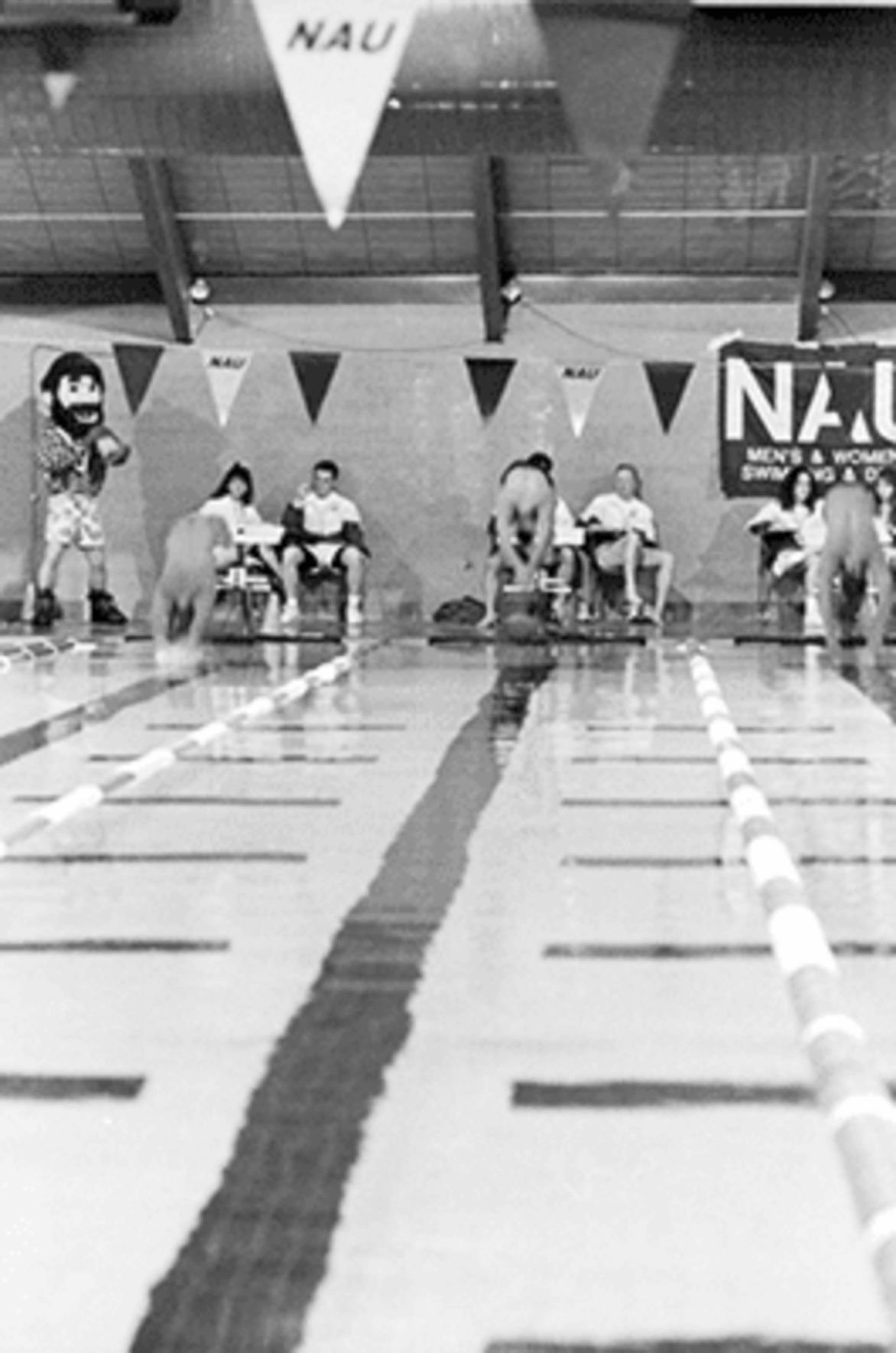 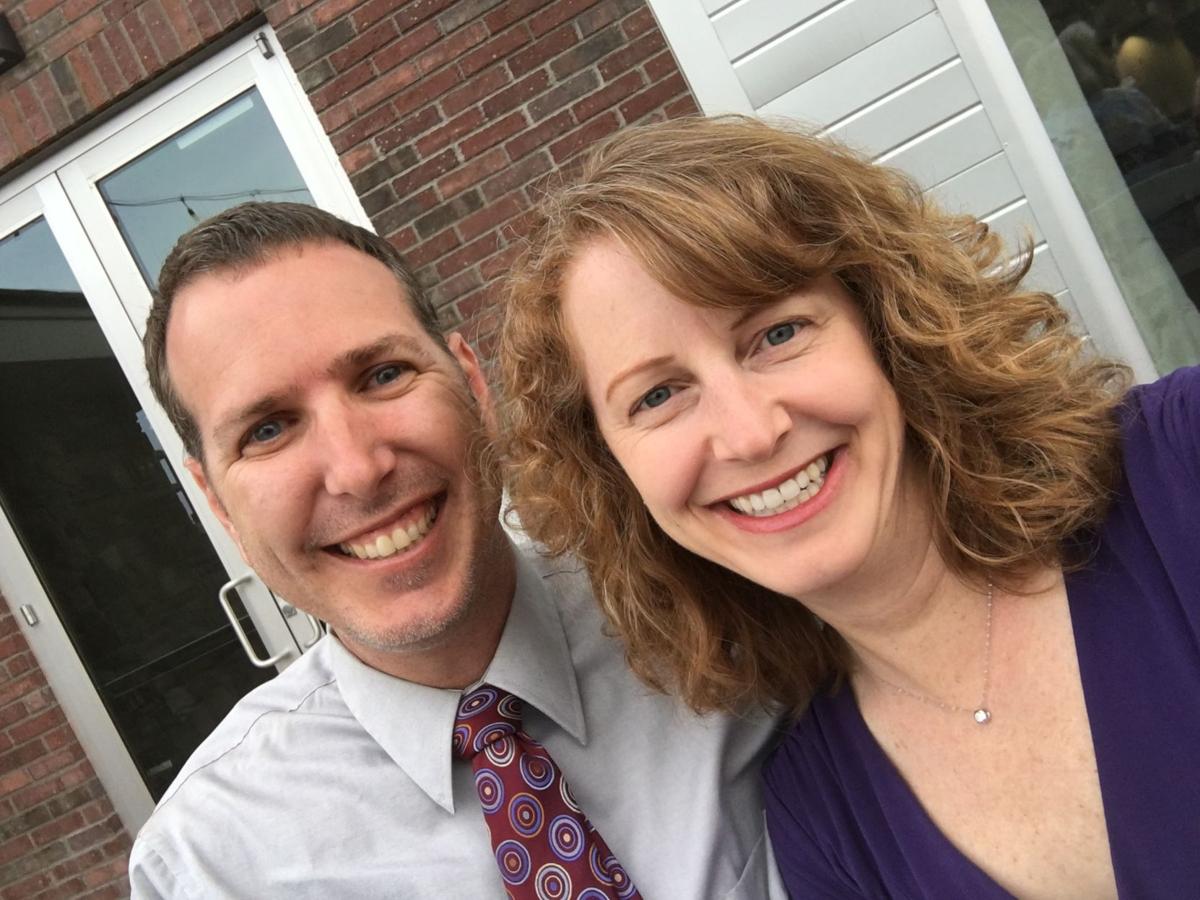 The NAU swim team has a deep history in Flagstaff, having received recognition for achievements both inside the pool and inside the classroom. However, two people who met in the pool ended up creating a relationship that would change their lives.

Dawn and Brody Clifford are former Lumberjack swimmers with a great story. Both were sprint freestyle swimmers participating in the 50- and 100-meter freestyle and relays. Dawn grew up in California and fell in love with Flagstaff when she did a campus tour of NAU. Brody grew up in Phoenix and loved the idea of attending a school with a swim team that was in his home state. The stars aligned for the athletes at the beginning of their careers as Lumberjacks.

“We met at our first swim party, but we didn’t start dating for a few months,” Dawn said.

The two stayed together all four years of college. They both encouraged each other to be the best version of themselves, even when it was difficult. Brody and Dawn helped each other stay motivated as athletes, and made practice and meets more exciting. The two had a great time traveling to meets, training together and seeing new places.

With all the traveling and swimming the Cliffords did, having a partner who knew the feelings that accompanied being a college athlete was a blessing for them both.

“It was nice having a partner who understood the fatigue and hunger that came with every training session,” Dawn said.

Dawn graduated from NAU with a degree in nutrition and dietetics in 1999, and Brody graduated a year later with a degree in liberal studies. After graduation, Dawn moved to Los Angeles for a yearlong internship while Brody finished his schooling at NAU. On weekends and breaks, both Brody and Dawn would alternate driving 6 hours to see each other.

After the internship was finished, Dawn moved to Phoenix to be closer to Brody. In that time, she heard the nutrition program at NAU was shut down. There were a variety of emotions with the news, on top of discovering that the men’s swim team was discontinued in 1999.

“It felt like walls crashing down behind us as we were leaving,” Dawn said.

Striving to get closer to their dream jobs, the Cliffords moved to Colorado to continue their educations. Brody earned a second bachelor’s degree in business and computer science. Dawn earned a master’s and a doctorate degree during her time at Colorado State University. It was during this time that the Cliffords found out there would be an addition to their family. The couple had a son while Dawn was finishing her doctorate degree.

After their college careers were over, Dawn took her first professor position at California State University, Chico. After living in California for 10 years, the family took a trip to the Grand Canyon to see where “mom and dad met.” The family came back to NAU for a visit and rehashed old memories.

“We wanted to check out the new Wall Aquatic Center and on the day we visited, [swim] coach Andy Johns was in the middle of practice and saw us through the windows,” Dawn said.

It had been 17 years since they had seen Johns. Through conversation, Johns informed Dawn that NAU was trying to restart the nutrition program. After considering the job, Dawn applied as a proud alumna and wanted to do anything to help the program take off. She was offered the job at NAU, but she initially turned down the offer because the family was happy in Chico. Brody did not agree with Dawn’s reasoning.

“Ever since I’ve known her, she’s wanted to be a professor at NAU,” Brody said.

With Brody’s encouragement and support, Dawn applied for the position and was hired to restart the undergraduate and graduate nutrition program. She said she loves having the opportunity to teach students at NAU, and loves having a swimmer or diver in her classes, occasionally.

Along with teaching at NAU, Dawn is the public address announcer for most of the home swim meets for the Lumberjacks.

Dawn and Brody get to relive some of their memories through their son, who has participated in swim meets in the past. Now he is trying different sports left and right, but as parents, they want their son to find his sport and flourish in it.

The support the Cliffords show for each other in their journey is what family is all about for them. Having their lives change from taking a family trip to show their son where it all started is how they found their happy place.

“You never know how your life might come full circle,” Dawn said.

NAU men’s swim is extinct, but not forgotten.

NAU Athletics has had its fair share of struggles as well as its fair share of accomplishments. However, some teams have lasting success during their time in Flagstaff. The NAU swim team is one of those sports.

The program was brought to the university in 1983. When it started, there was only a women’s swim team. Pam Rogers was the choice to be the head coach. She graduated from ASU as a four-time All-American, a two-time national champion and an alternate for the 1976 United States’ Olympic Team.

When the program began, it was not recognized by the Big Sky Conference. Rogers took it upon herself to go after other schools facing the same issue and created the Pacific Collegiate Swim and Dive Conference (PCSC).

“The [California] coaches and I started the PCSC for teams who really needed a place to go that was regionally and logistically advantageous,” Rogers said.

In 1990, NAU added a men’s team to the mix and appointed Rogers as the head coach for both teams. Rogers led the men’s team to PCSC titles in its first two years as a program and coached the swimmers to a total of six titles in seven years.

Rogers started her coaching career as an assistant coach at ASU where she swam and attended college herself. The Sun Devils’ athletic director, who was formerly her coach, informed Rogers that NAU was building a natatorium and wanted to start a women’s swim team. Rogers applied and got the job.

At the beginning of her career as the Lumberjacks head coach, the men’s swim team was a club sport. Rogers dedicated a lot of time and effort to get the men’s program up and running.

“I guess I was just working very hard to help the men’s program get started,” Rogers said.

Rogers enjoyed coaching the men’s team due to the athlete’s hard work and dedication. She added that the men’s program was a great addition to the women’s team.

The success of the program is something that Rogers is still proud of to this day. Her career as the swim coach ended in 1996. After coaching the sport for over 20 years, Rogers felt it was time for a change. She headed back to Phoenix to become an English professor at Phoenix College.

After Rogers’ move from Flagstaff to Phoenix, Johns was named head coach and stepped into the program. Johns came from Clemson University in 1999, where he trained the Tigers’ sprinters. Johns was a swimmer in college and earned awards during his career.

Johns said the hardest part of losing the men’s program was seeing the male athletes that wanted to continue swimming for the Lumberjacks but had to leave NAU to continue their college careers.

Johns explained that the bond between the teams was incredible. The men’s team was loud and vocal during the meets. The women’s side of the team was great at keeping the team in high spirits. He said that the women took a while to get accustomed to the change and having to swim alone, but they worked hard and bonded well.

“I have a job to coach these women, prepare them to swim fast and graduate,” Johns said.

With 21 seasons under his belt, Johns has produced high-caliber teams each season he has been with the Lumberjacks. He has five conference titles, nine runner-up finishes and only three conference finishes outside the top three.