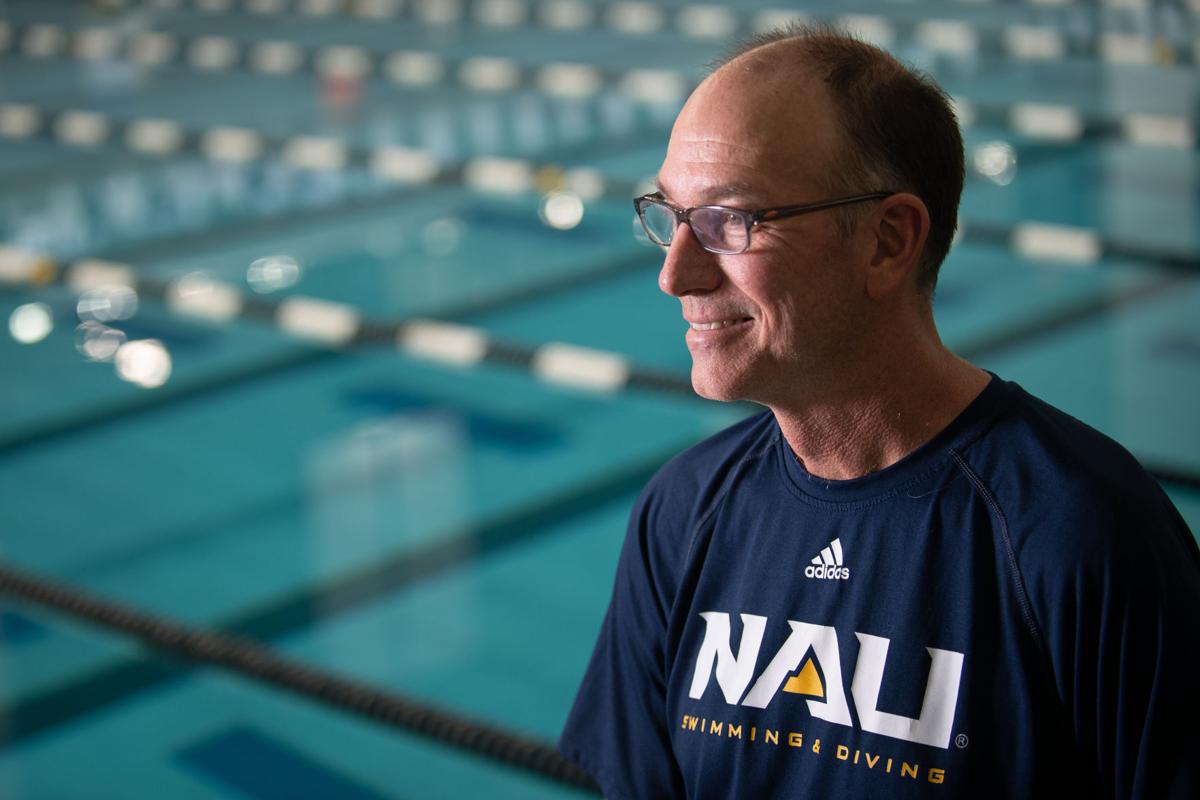 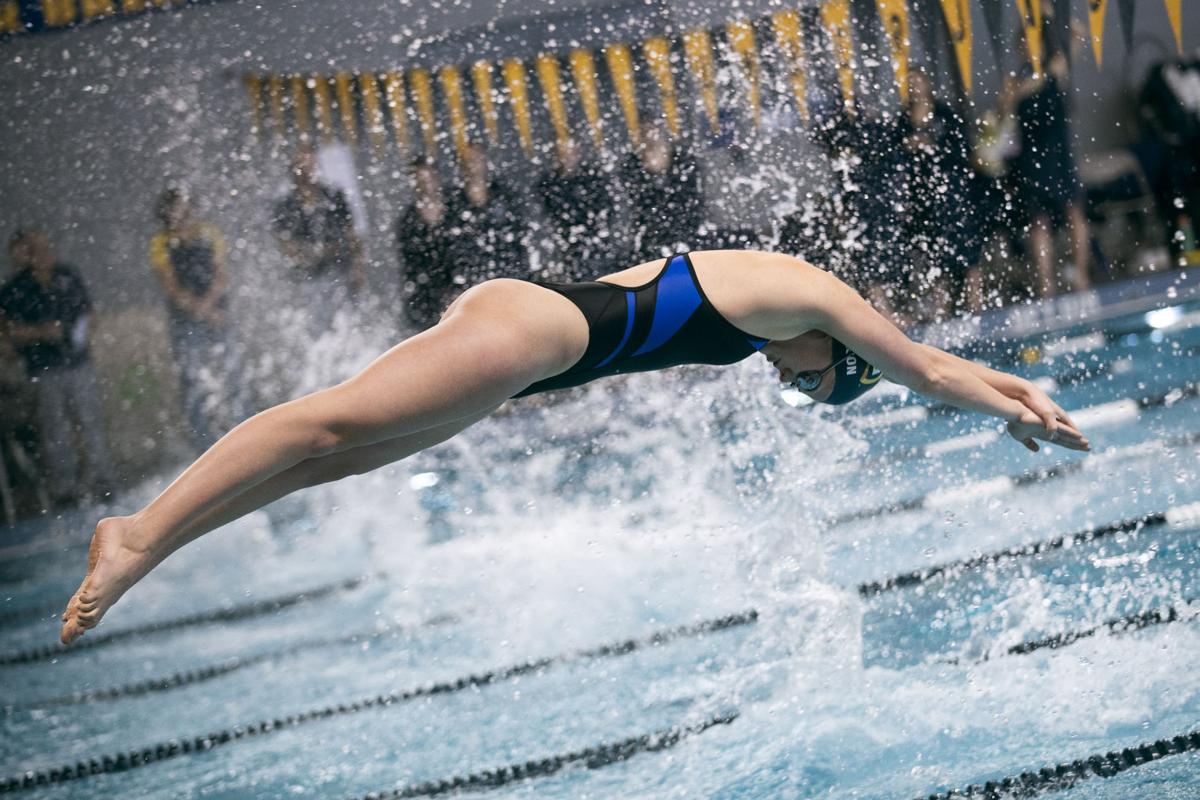 NAU women’s swimming and diving head coach Andy Johns opens the doors to the Wall Aquatic Center. He smiles at the familiar surroundings as he waits for his team to arrive. Johns has been the head coach for the women’s swim and dive team at NAU for 24 seasons. For him, he has never been out of the water.

Johns’ love for the pool began when he was 8 years old when he first developed his passion. Coming from the warm waters of Florida to the lush mountains of Flagstaff, Johns has made a name for himself at NAU. He joined the university in 1996 when he started as head coach.

For Johns, winning goes beyond titles. He runs his program with consistency and the idea of the team being a family. Junior swimmer Hope Williams had a coincidental meeting with coach Johns, which led her to become part of this family.

Waiting in the elevator of a hotel lobby while on vacation in Florida, the bell rang as the door opened, and in walked Johns. Williams was wearing her high school swim shirt and Johns asked if she swam. Little did she know that her family vacation had just turned into recruitment.

Coming from a small town in Texas, she never thought she would be swimming at a college level.

“I loved swimming in high school and I was just like, ‘I’d never be good enough,’ just because I never swam club,” Williams said. “I kind of gave up on the dream. But when I came here and saw Andy, and he actually believed in me, it was a big eye-opener for me and I thought I can do this.”

Williams said that with faith from Johns, she made the best decision of her life to attend NAU. This program gave her a lot more confidence and her times have improved tremendously since the start of her career with the Lumberjacks. According to NAU Athletics, she holds the NAU record in the 100-meter breaststroke, and has the third fastest time in the 200-meter breaststroke.

“Nikki, our diving coach, and I have been here together the whole time, in fact, we were two years together at Clemson before we came here, so that consistency is helpful,” Johns said.

Even though Johns has had a steady partner by his side, being head of the program for 24 years has come with highs and lows. The team may be swimming around the pool with titles, but there were times when it struggled.

Before NAU joined the WAC conference, it competed in the Pacific Collegiate Swim and Dive Conference from 1996 to 1998. Johns was ready for a new level of competition and decided to join the first all-Division I affiliation, the NIC in the 1998-1999 season.

NAU competed fairly well in the division, placing second in the NIC Swimming and Diving Championships in the 2003-04 season. However, when the opportunity came to join the WAC prior to the 2004-2005 season, Johns did not hesitate.

“It was a good challenge and something we needed at the time,” Johns said. “We are happy to have made that decision.”

Competing at a new level helped the team improve and since then, they have been swimming rapidly to the top.

Johns also stressed the importance of being leaders on campus and active members of the community. He knows this is a full-time job for his athletes, going from practice to school to the weight room and repeat.

That is why the program works cohesively, from the recruitment process to the training and preparation going into their conference appearances. Johns and the coaching staff work closely with their swimmers, but the swimmers are the ones who do all the work.

“We have been fortunate to have some great athletes come here and get better,” Johns said. “They love to compete. They really love to perform.”

The team has been floating comfortably on top for years, but they want to keep performing at high levels. Former NAU swimmer Monique King will be trying out for the New Zealand Olympics team in March 2020. Even though Johns has not had swimmers at the professional level, he has not given up.

“I think it is really important to have clearly defined goals and expectations,” Johns said. “Everyone helps each other, pushes each other and when we can achieve those goals, it is a nice accomplishment.”

Even with challenging goals for the team to meet, no dream is impossible. With continuous goals and a great support system, the individuals that make up the team believes they can make it to the Olympics.

Despite these big dreams and goals, the coaching staff wants the swimmers to have fun and not focus too much on their swim times. The program continues to succeed, as it provides confidence and a level of comfort for the athlete in and out of the pool. Williams never thought she would swim at a college level, yet she broke a school record. For her, NAU was the first and the only school she considered.

“They’ve literally given me the best college experience I could ask for,” Williams said.

On Feb. 20 2016, NAU opened the doors to its Wall Aquatic Center. With its Olympic-size competitive pool, NAU’s swim program got a lot better. The team was already attracting recruits with their dominating performances, however, the opening of the facility has been a deciding factor for a few of their swimmers.

This was the case for junior swimmer Elisa Rodriguez.

“The facility is obviously beautiful and brand new,” Rodriguez said. “After looking at other schools and seeing you are going to spend most of your time here, you want it to be something very comfortable and nice.”

Rodriguez and Williams were some of the first swimmers to enjoy the complex. Williams never saw the old pool facility, but compares it to a dungeon based on old pictures she has seen. For her, waking up at 5 a.m. is exciting because the new facility does not make it feel like practice.

Not only does the facility have an exciting atmosphere, but the relationships that form in the recruitment process help keep the program afloat. From the moment potential students fly in for their recruitment trip, a bond is formed.

“It was awesome. I came and I went to the Hot Spot with a bunch of girls and they made me feel very welcome,” Rodriguez said. “I got to tour the pool and see everything and talk to Andy. It was great, really great.”

The program takes recruitment seriously. Johns said the program is half of it, but the city of Flagstaff is the other half. High altitude is great for swimmers and this city provides that. Even though the program seeks ways to welcome their recruits, Rodriguez said she thinks having better communication between the players and coaches will make the recruits experience unforgettable.

“We want a bunch of girls to come here and ... love it,” Rodriguez said. “I think there needs to be more communication when touring the girls, among the coaches, just so their experience flows really well.”

The facility has marked new beginnings for the swim program at NAU. Although Johns does not believe the facility has contributed to their championships, he is looking forward to continuing to expand the program.