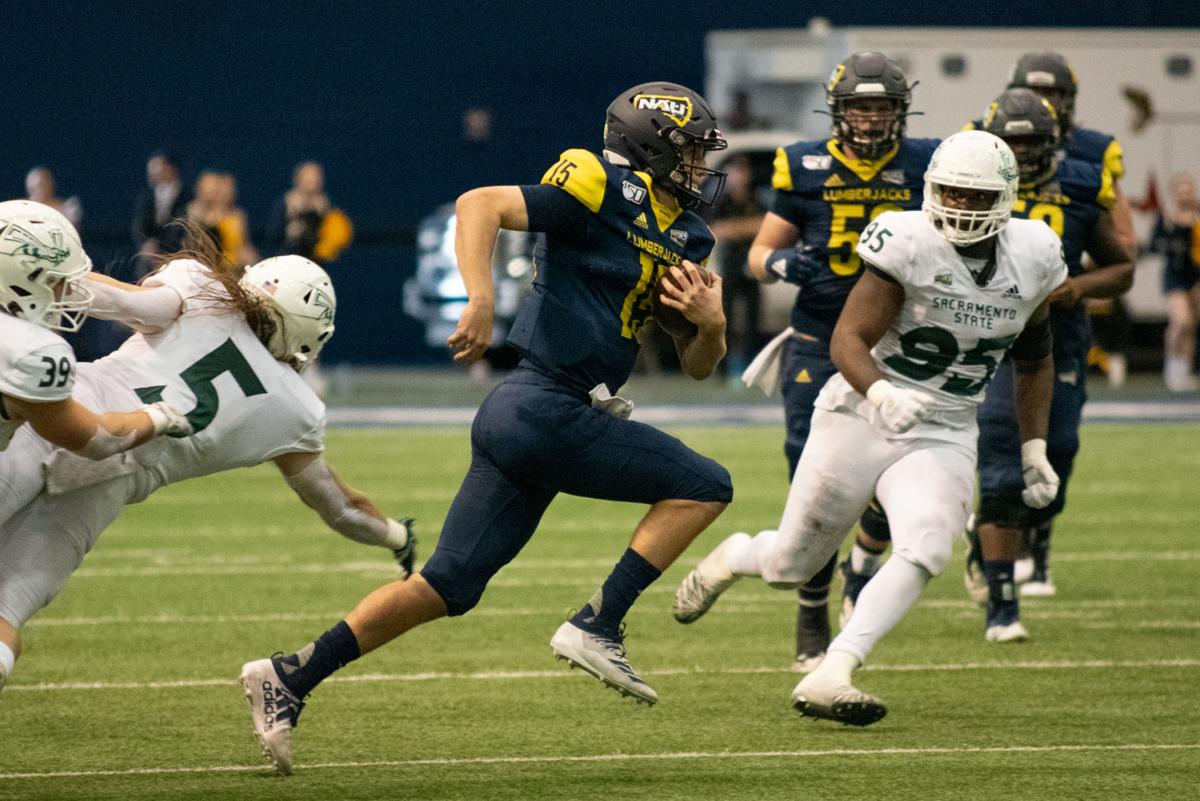 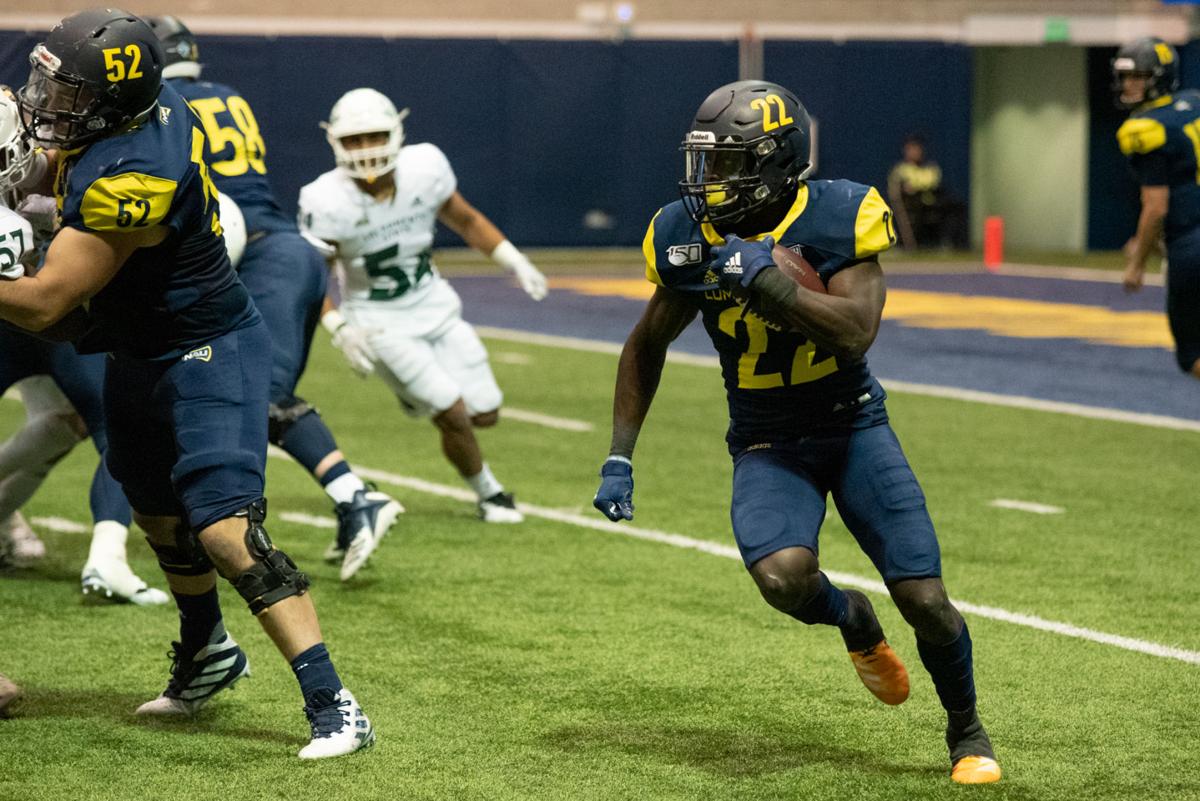 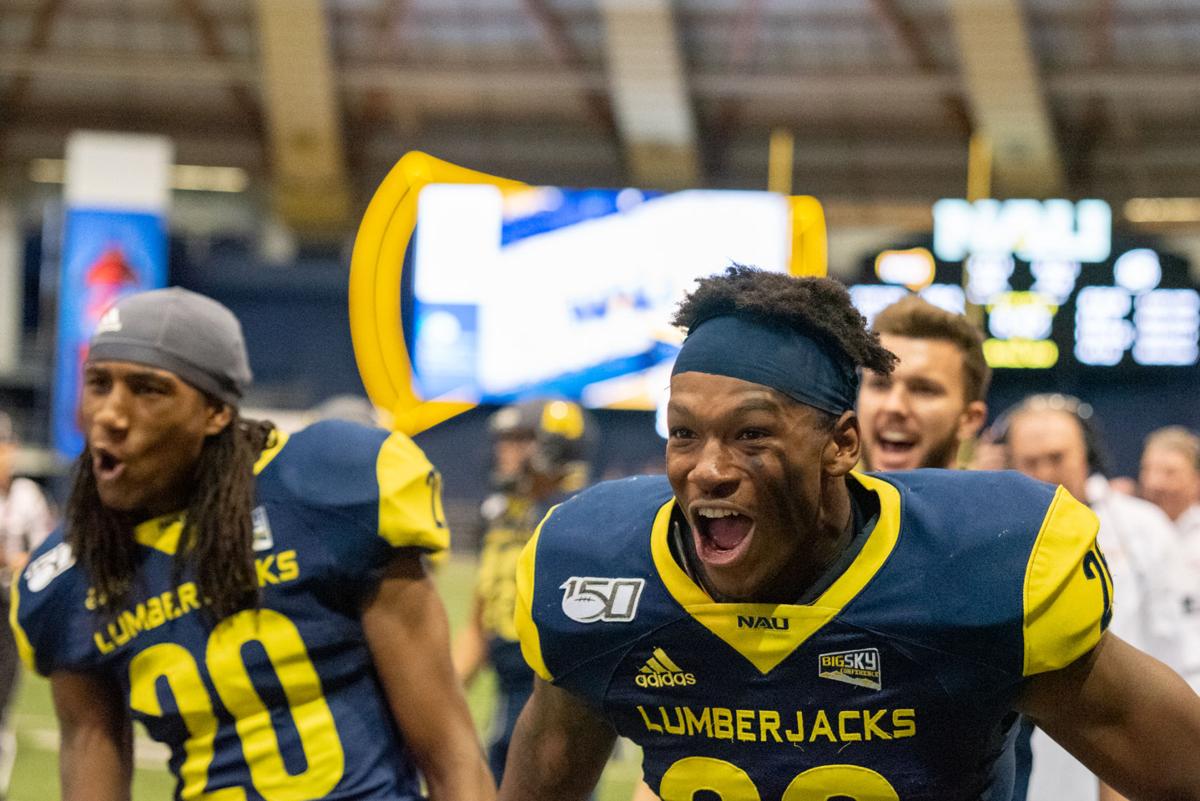 Freshman defensive back Daego Albert (20) and freshman athlete Nate Perkins (26) celebrate on the sideline at the Walkup Skydome Nov. 9. 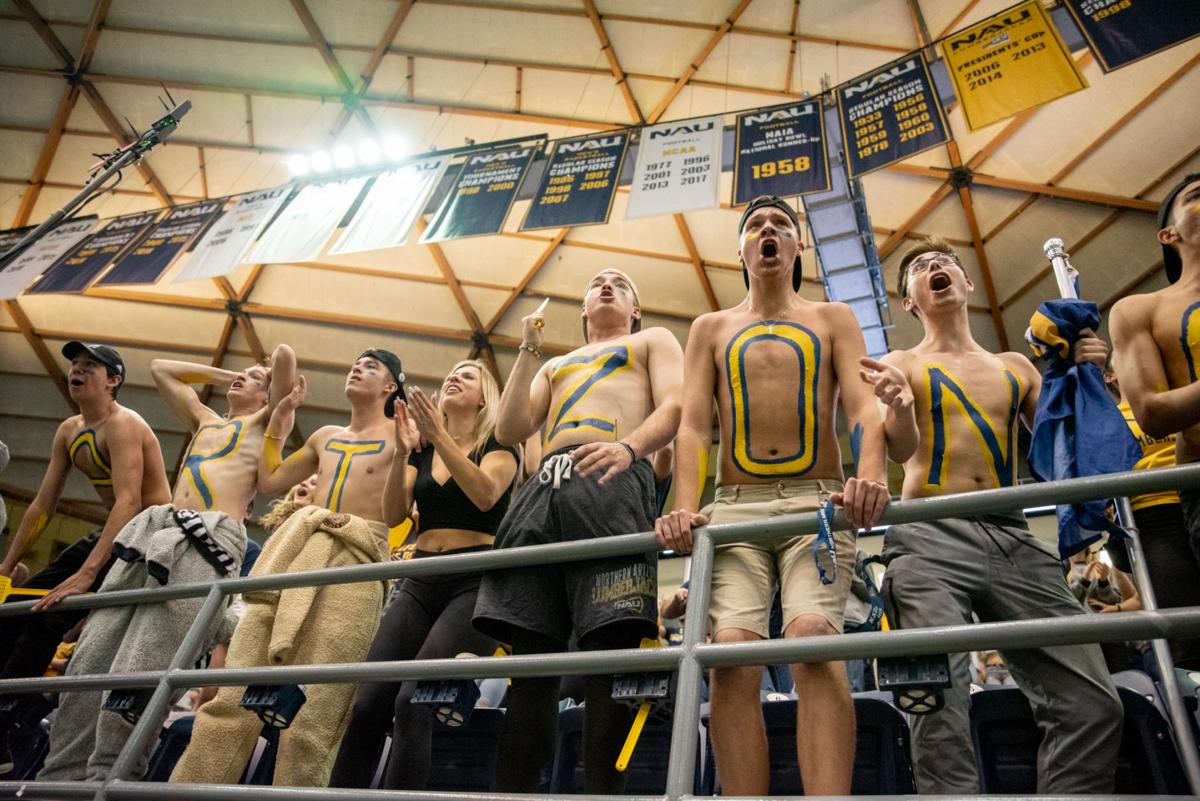 NAU fans celebrate in the stands at the NAU vs. Sacramento State football game Nov. 9. 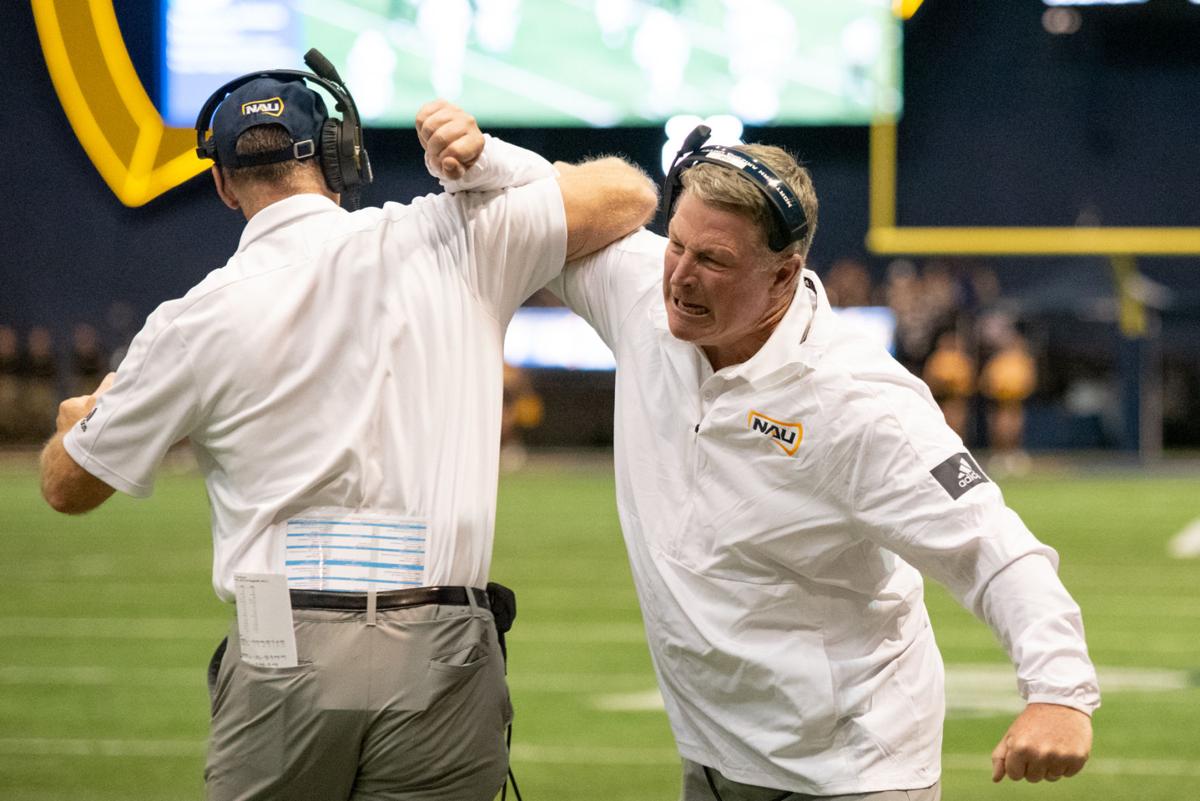 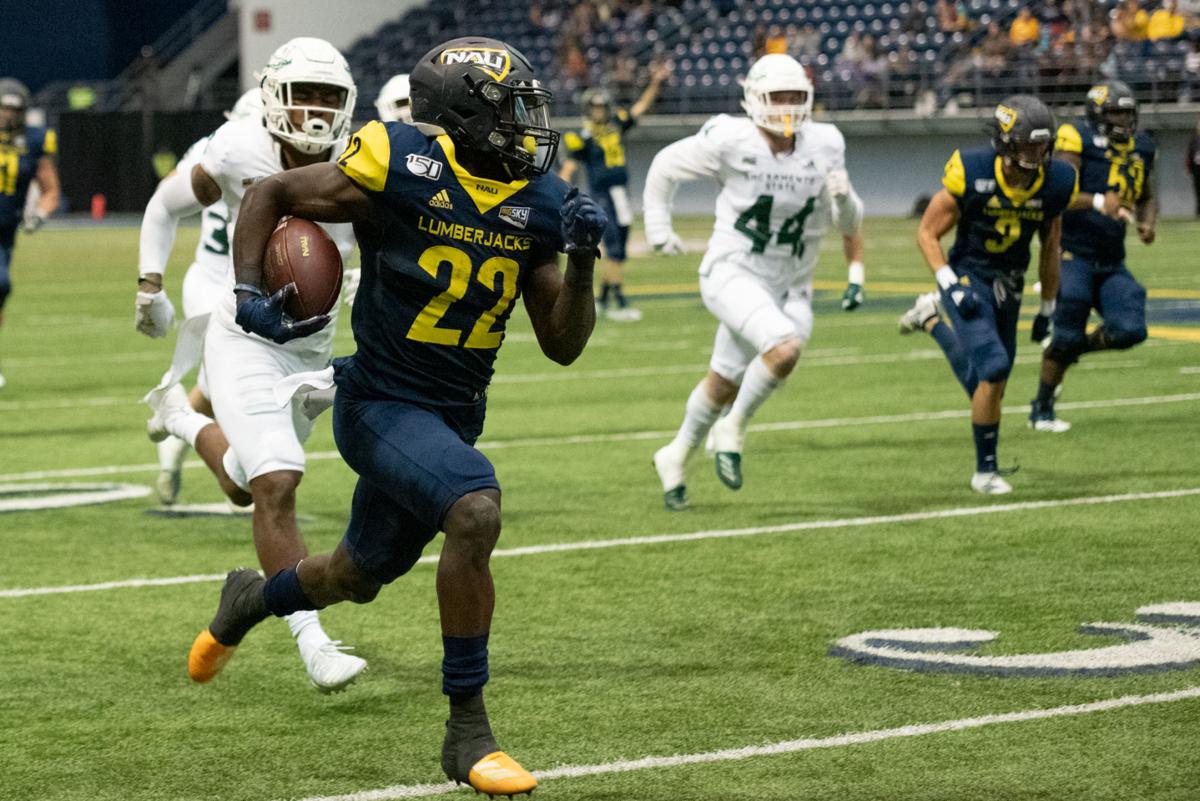 Freshman defensive back Daego Albert (20) and freshman athlete Nate Perkins (26) celebrate on the sideline at the Walkup Skydome Nov. 9.

NAU fans celebrate in the stands at the NAU vs. Sacramento State football game Nov. 9.

NAU played the Sacramento State University Hornets coming off a loss against Eastern Washington University and hoped to hold their ground at home. The Hornets attempted to bounce back after losing their starting junior quarterback, Kevin Thomson, to a blindside hit and ending their 4-game winning streak last week against Weber State University.

Sacramento State came out strong with a 63-yard touchdown from sophomore quarterback Jake Dunniway to freshman tight end Marshel Martin on the Hornets' first drive. Following an unsuccessful drive by the Lumberjacks, Dunniway completed a play action touchdown pass of 14 yards to Martin — their second connection of the quarter — and took a 14-0 lead. NAU quarterback Case Cookus was held to just 3 yards in the first quarter, and the team did not manage to score.

A strip sack by senior linebacker Chris Jules gave NAU the ball at the Hornets' 24-yard line early in the second quarter. They capitalized with a 1-yard rushing touchdown by senior running back Joe Logan, bringing the score to 14-7.

Sacramento State responded with a field goal, making it 17-7, but Logan came back with a 51-yard rush — by far the longest rush of the season for the Lumberjacks. The score was 17-14 with just under five minutes left to play in the first half.

After the Hornets' first three and out, NAU was stopped on a 16-yard loss on a sack by junior linebacker Marcus Bruce, forcing another punt. NAU managed to tie the game at 17 with a 44-yard field goal by junior kicker Luis Aguilar. The ball flew through the goalposts with just eight seconds left in the half, capping off a 17-3 scoring run

The biggest story of the first half was Cookus being held to just 66 passing yards, compared to Sacramento State's 176.

At the start of the second half, a 32-yard carry from Dunniway to freshman running back Elijah Dotson brought them down to the NAU 9-yard line. An interception by Lumberjack redshirt sophomore Anthony Sweeney led to a 73-yard Cookus connection with redshirt junior wide receiver Stacy Chukwumezie. An extra point from Aguilar tied the game at 24.

NAU's defense looked much stronger in the second half and got the ball back early in the fourth quarter, setting up a go-ahead 54-yard field goal by Aguilar. Logan then broke off with his third score of the day: a 63-yard touchdown run, which gave the Lumberjacks a 10-point lead and brought the score to 34-24 with just under six minutes left to play. Thanks to the touchdown, Logan became the first 200-yard rusher for NAU since 2013.

An onside kick gave Sacramento State hope, and the team drove 49 yards in just five plays, reaching the NAU 2-yard line. With no timeouts left, the Hornets took the lead 38-34 on an 18-yard touchdown pass from Dunniway to Williams.

The NAU home crowd was stunned. A last-ditch effort of rugby-style laterals got the Lumberjacks close, but the ball was called dead when their time expired. NAU was handed a devastating loss.

NAU’s defense looked poor at times and seemed to crumble under the pressure of the end game. They allowed Sacramento State’s backup quarterback to throw 384 yards and 4 touchdowns. The Lumberjacks hope to bounce back next week at Southern Utah University, while Sacramento seeks to carry their momentum to a game against Idaho State.