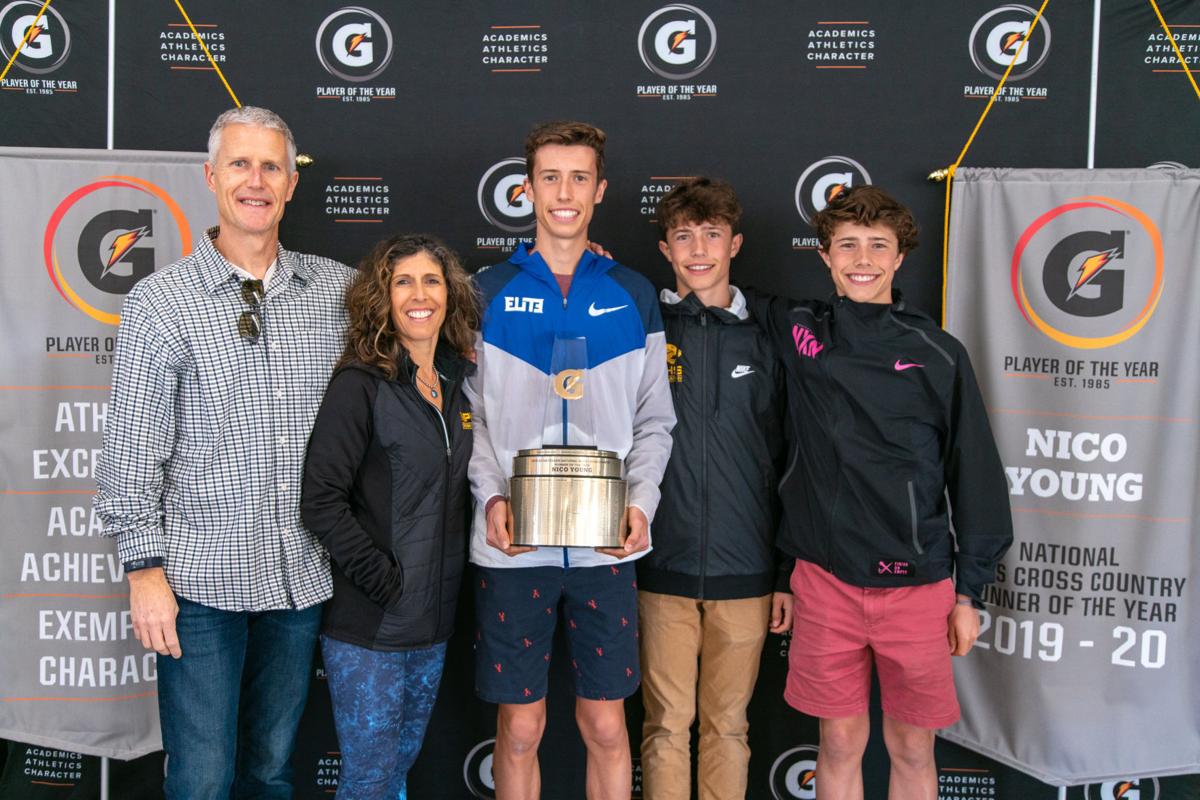 Young and his family posing for a photo at Newbury Park High School, Feb. 20. Photo courtesy of Lyndsay Goldstein, Gatorade Player of the Year Program. 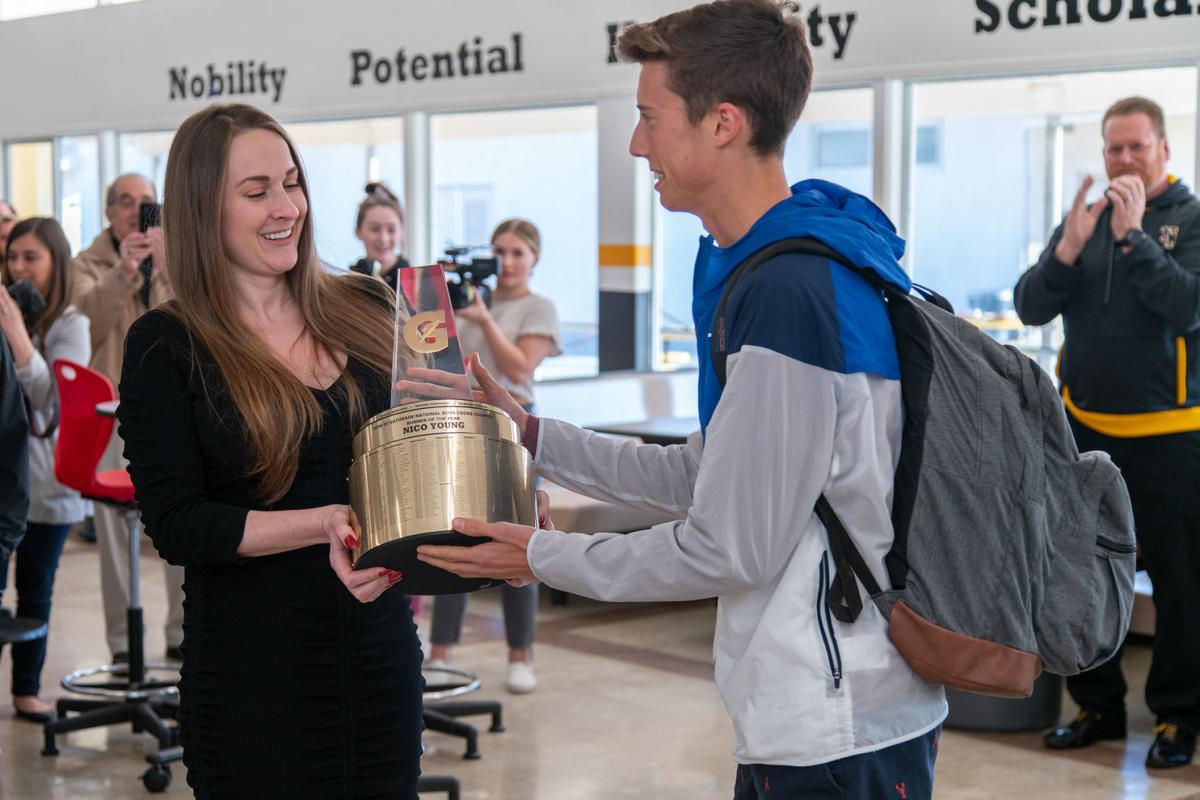 Young being awarded with the 2019-2020 Gatorade National Boys Cross Country Runner of the Year. Photo courtesy of Lyndsay Goldstein, Gatorade Player of the Year Program. 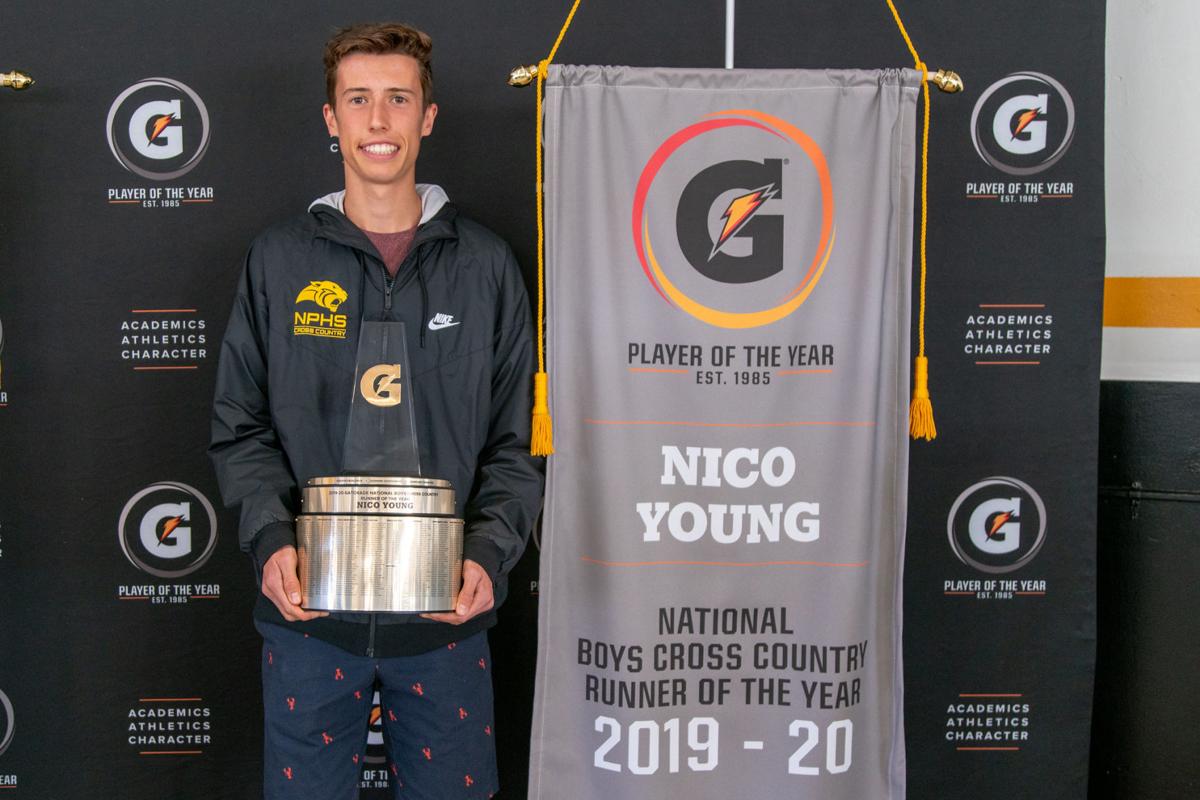 Young and his family posing for a photo at Newbury Park High School, Feb. 20. Photo courtesy of Lyndsay Goldstein, Gatorade Player of the Year Program.

Young being awarded with the 2019-2020 Gatorade National Boys Cross Country Runner of the Year. Photo courtesy of Lyndsay Goldstein, Gatorade Player of the Year Program.

Cross country and track and field have been two of the most successful teams of late for NAU Athletics. According to NAU Athletics, the cross country team was the first non-power five school to win three consecutive national championships when it went on a dominant run in 2016, 2017 and 2018. Track and field is on the rise as well, as it recently received the United States Track and Field and Cross Country Coaches Association’s No. 1 ranking for indoor track and field. These two programs are about to get even more talent next season when star track athlete Nico Young joins the Lumberjacks.

Young is a high school senior at Newbury Park High School in Newbury Park, California. He has quickly become one of the most sought-after track and field recruits in the nation. When it was time for him to choose where he wanted to further his career, NAU made sure to put its name in the running, and luckily, the Lumberjacks were the winners.

“On my visit there, I definitely felt a good connection between myself and the team, as well as coach [Michael] Smith,” Young said. “I think that environment and the team at NAU were unlike any other team that I visited.”

Young also discussed how Flagstaff appealed to him during the recruiting process.

“The place and the location are pretty awesome,” Young said. “Everything just went really well on that visit and I think Flagstaff is the best place for me to be.”

Young will have a lot of support when he makes the transition from high school to college as well, especially from his high school coach Sean Brosnan.

Brosnan has been coaching cross country at Newbury Park High School for the past four years. He was named the California High School Cross Country Coach of the Year in 2019 by the U.S. Track & Field and Cross Country Coaches Association, and has had a helping hand in Young’s development since his freshman year.

“I actually started working here at Newbury Park the same time Nico was beginning his freshman year, so he and I have a very good relationship,” Brosnan said. “We have very open communication about his training and I knew early on that he was going to be something really special.”

Brosnan was not wrong. During his time in high school, Young started racking up championships and records. According to MileSplit, he was a two-time California Interscholastic Federation Division II state champion, the reigning champion of the Nike Cross Nationals (NXN), as well as the current record holder for the best time in the NXN 5K meet.

Given Young’s impressive accomplishments, NAU cross country assistant coach Jared Cornfield realized Young was a recruit the Lumberjacks could not pass up.

“The recruiting process was very competitive,” Cornfield said. “Every top school in the country was going after Nico and we are just really excited he chose NAU. We can’t wait for him to have the NAU letters displayed across his chest.”

On Feb. 20, Young was awarded one of the most prestigious awards any athlete can receive at the high school level — the Gatorade National Boys Cross Country Runner of the Year. Young was surprised with the award when he walked into Newbury Park’s halls that day.

Young explained how it felt to be in the same conversation as other notable names that have received the award.

“It definitely means a lot to me,” Young said. “It’s really awesome to get such a prestigious award that all of these other amazing athletes have received from years past. It’s awesome to be a part of that and to be on that list.”

Brosnan shared this moment with his star track athlete as well, as he explained how it felt to see one of his runners earn the award.

“It’s pretty amazing to see him get it,” Brosnan said. “In the high school athlete world, getting that award is like an actor getting an Oscar. The Gatorade award is special, so when they finally came to the school and surprised him with it, it was a special moment. As his coach, it was great to just sit back and celebrate him.”

While all of the accolades are great for a young athlete’s confidence, Young knows that academics come first. He said he is looking to study either exercise science or business when he starts classes at NAU this fall.

The biggest aspect that Cornfield expressed is that he wants Young to go through the same experiences all college students go through.

“We just want him to be a normal freshman and have that normal college experience here at NAU,” Cornfield said. “A guy like Nico has all the potential in the world, and we cannot wait for him to get to Flagstaff and start showing that potential, not only on the track but in the classroom as well.”

For an athlete like Young, the sky is the limit. He said it has been inspiring to see what the NAU track and field team has done recently and is ready to contribute when he arrives to Flagstaff.

Brosnan said he has a lot of confidence that Young has the ability to be great in all aspects at NAU.

“Nico is a phenomenal athlete and student,” Brosnan said. “I don’t have any doubt that he will excel in whatever he decides to major in, as well as whatever he does on the track. Being in the program with [Michael] Smith and all those great athletes that they have in the program, I’d love to see him win a national championship with NAU. As long as he listens to his coaches, I think he will be able to do great things with the Lumberjacks, I really do.”

With an already impressive roster and three national championships to show for it, the NAU cross country team and track and field team have found a new weapon that will help keep its winning culture alive for years to come.