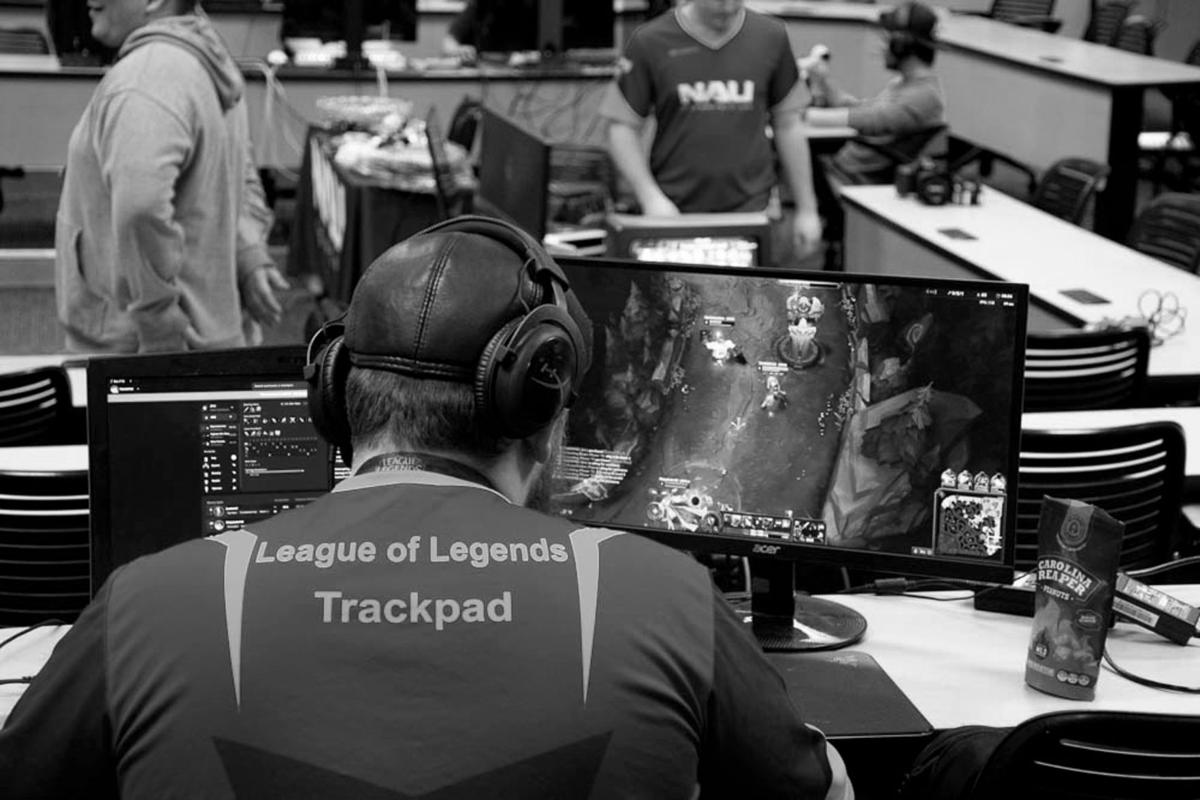 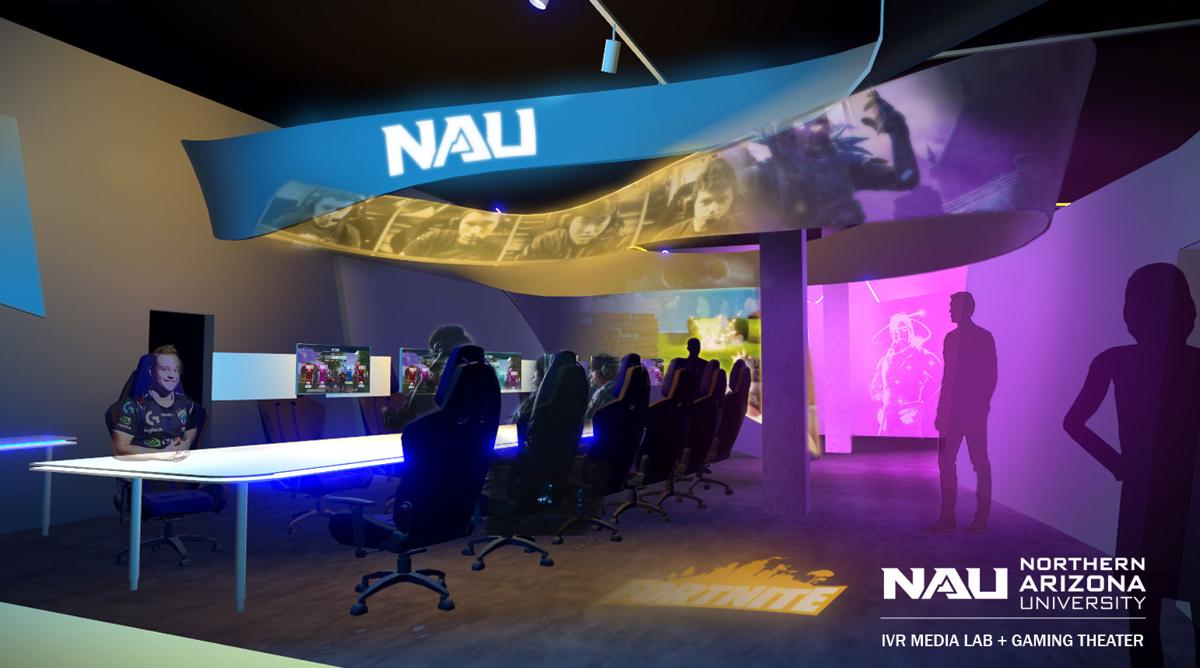 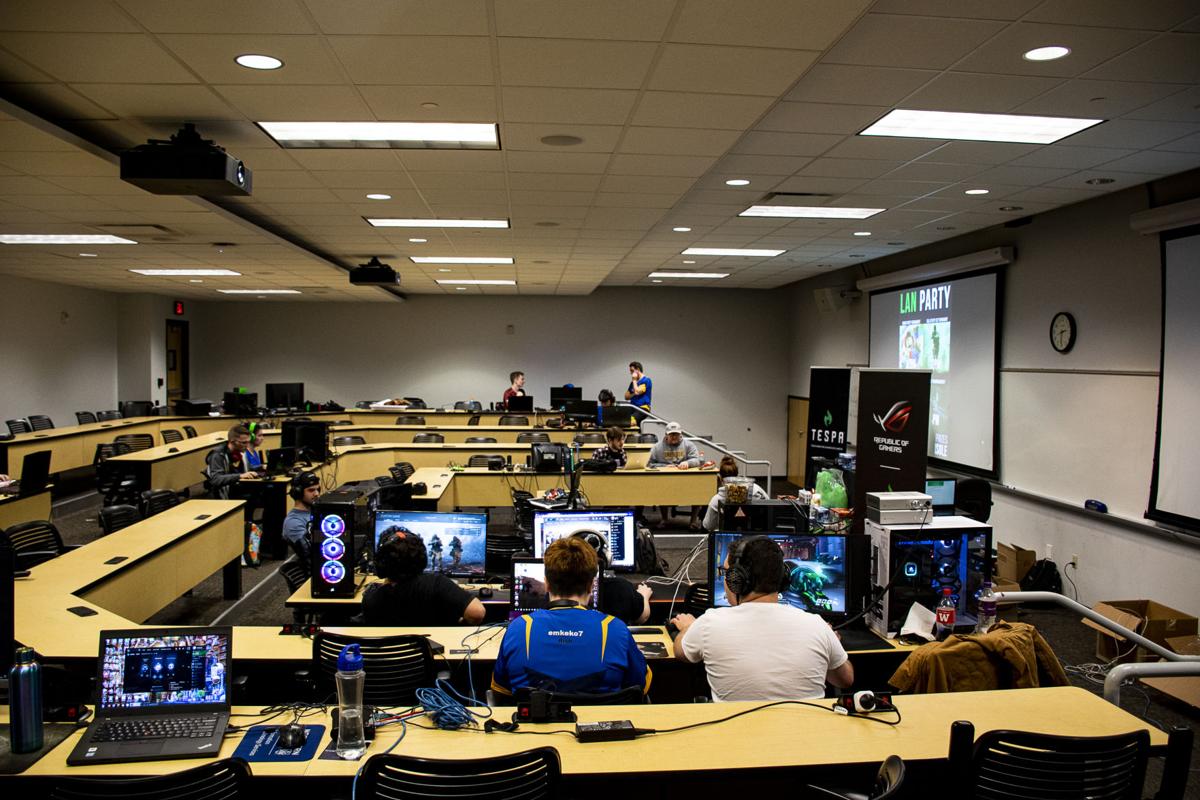 Members of the NAU Esports club gathered to particiate in a 12 hour gaming event in the engeneering building Nov. 9, 2019.

Members of the NAU Esports club gathered to particiate in a 12 hour gaming event in the engeneering building Nov. 9, 2019.

Cables scattered across the floor, fingers frantically tapping on keyboards and the occasional scream of defeat or victory comprised the 12-hour NAU Esports club gaming event. Cups of coffee and bottles of water stood next to a majority of gamers’ computers, as they stared at their screens with their headsets on, listening to every sound their game produced.

The 12-hour gaming event, which took place Nov. 9, was the second one hosted by the club in the fall 2019 semester. Including the club officers, there were over 30 students, men and women, in attendance for the majority of the day. Lugging their expensive computers, keyboards and headsets to the Engineering building on south campus was not easy, but it was well worth it for many of the student gamers.

The event was sponsored by Tespa, an esports company comprised of students and competitors to help bring together collegiate esports athletes. There were four competitions at the event that attendees could enter to win prizes, provided by Tespa.

The esports club was founded in 2017, as an unofficial club by the current president and senior Gabriel Santos. In 2018, it became an official NAU club after being connected with True Blue Connects and the Office of the Dean of Students.

Santos said while some may not consider esports to be a conventional sport like baseball or football, the sport has gained popularity over the last few years, including at NAU. The NAU Esports club and its members casually and competitively play games, such as Overwatch and League of Legends, with the goal of being part of the expanding sport.

“We want to turn it more like football where we have scouts come to our games, they look at our players and we can start feeding into [a] proper system like traditional sports have built,” Santos said. “So, that was kind of the end goal but it’s just really building up a strong community of building all these teams.”

Similar to traditional sports, the NAU Esports club has coaches and two playing divisions — the Division I gold team and the Division II blue team. Senior Devlin Nipper, League of Legends game captain, is one of the esports coaches. Nipper joined in 2017 when it was still an unofficial club. Since then, Nipper said he has seen the club make huge leaps.

“Instead of being like multiple individual game clubs, it’s come together as a unified community, we’ve become more formally recognized by NAU and, within the club itself, we’re competing in more tournaments,” Nipper said. “It’s basically just become a more official deal over the span of time.”

As a coach, Nipper guides and develops gamers. Like any other sport, Nipper encourages his gamers to develop healthy habits so they are fit to compete in tournaments.

“It very closely resembles what you would expect from a traditional sports team,” Nipper said. “It sounds cliche, but it’s all the standard stuff, you know, drink enough water each day, eat a balanced diet, get eight hours of sleep each night, prioritize school over the game and even exercise is a part of it.”

Nipper said there are a variety of exercises that work the reflex muscles in the arms, back, shoulders and neck. Although esports is not a very physical sport, gamers need fast reflexes and reaction times. Nipper said when a gamer is playing at peak performance, it will take half a second to recognize and react to something happening in the game.

To warm up, Nipper encourages his gamers to jump right into the action and just start playing the game of the player’s choice. Nipper said that after a certain amount of lessons, players will pick up on key themes that he wants them to work on.

Being an esports competitor requires a strong mentality as opposed to being physical like in traditional sports because players need to make in-game adjustments and focus for several hours during a tournament. Nipper said healthy habits, exercise and diet all play into a strong mentality, but there are supplemental materials he can provide.

“There’s all kinds of sites, videos — little just warm-up strategies that I’ve used over the years,” Nipper said. “But the biggest thing to improve the mental is just to get in the right mindset. You have to go in there in that right frame of mind to play at your best level because if you are even distracted by any one little thing, it’ll hamper how you play.”

Nipper said the biggest misconception that surrounds esports is that it is not a sport, and its participants are not athletes.

“There’s many elements to esports that mirror traditional sports,” Nipper said. “We’ve got competitive audiences that like to watch and we’ve got [a] win or lose environment. There’s so many parallels that can be drawn and people still tend to think that it’s not on the same level as an actual, traditional sport.”

Similarly, how sports are broadcast on TV, esports competitions, along with gamers content, can be publicized on streaming services such as Twitch and YouTube.

Sophomore Eliseo “Eli” Cruz joined the club this semester and uses Twitch to stream his gameplay. He has played Tom Clancy’s Rainbow Six Siege for years before joining the club, which is the game he plays competitively for the DII team.

Although he doesn’t have many Twitch followers, Cruz said the platform is great to get recognition. Two of his followers are his parents, who have supported his gaming passion since before he was in high school.

“I am able to stream my games and so they watch them over Twitch, and they’ll watch a couple when they have time,” Cruz said. “They’ll ask me how the team’s going and everything like that. So, they’re very supportive.”

Vision of the Future

Since the club was founded, Santos said he has a vision for the club to expand since esports are growing in popularity nationwide. Santos said the goal for the NAU Esports club is to be on the same level as Ohio Technical College and Grand Canyon University, two private universities with top esports teams.

Santos said his vision is to have scholarships for players, a dedicated playing space — which is being brought to NAU in the form of a new virtual reality (VR) lab — and most importantly, equipment.

“One of the primary things we are working on sooner rather than later is equipment,” Santos said. “We have players that are playing on their own computer that are playing at 40 frames per second, which is like playing with a plastic bat in baseball.”

Although the club is fairly new to NAU, President Rita Cheng, along with other faculty members, are supportive of the club’s growth due to its rising popularity and opportunities for students.

“I was aware pretty early on that there was a lot of attention being given to esports, even by the NCAA, as an opportunity to bring competitive spirit to a non-athletic type of sport,” Cheng said. “I think that when I look at our club, they’ve done so much in a very short time that I can’t wait to see what a more structured environment [it] will provide.”

Steven Burrell, ITS vice president and chief information officer, along with the esports secondary adviser Rye Heidinger and primary adviser Jeremy Anderson, are excited and supportive of the club’s growth.

Anderson said NAU is not currently looking to become an NCAA affiliated esports program, but it is something to consider in the future.

“At this moment, I think our ideals don’t line up and we’re just focusing on trying to build the community we have here,” Anderson said.

Giovanni Castillo, the founding director of NAU’s VR lab, is the mastermind behind the designs of the lab, which will be located in Room 112 of the Communication building. The lab, which has the working title of Advanced Media Lab, will be a dedicated space for the esports club to use, however, it will also be used to integrate students from a variety of different majors.

Castillo said the VR lab is a culmination of a five-year plan, which is what he considers to be his legacy at NAU. The development of the VR lab is a commitment that Castillo described as something that would be meaningful for students, faculty and researchers.

“The idea of beginning the lab was trying to find some sort of lab we could develop that would create collaborative research opportunities with undergrads and also people from different disciplines and scholars,” Castillo said.

Castillo said Burrell asked him to create a proposal for the lab and that if it could integrate research opportunities, then he would consider the proposal. Castillo presented the proposal and designs for the lab, which he created himself.

“Now the university is essentially looking at ways to fund the buildup of the lab that would potentially cost anywhere between $500,000 and $1.5 million,” Castillo said.

Looking ahead to the spring 2020 semester, the esports club will be competing in a League of Legends season. Anderson said the club is currently registering a 10-player roster that will compete in the season, which will take place from January to March 2020. There will be two games per weekend during the season and each tmatch will consist of a best of three competition.

The NAU Esports club, along with its players, officers and supporting faculty, wants to continue to grow the club and have it be recognized as a legitimate and valued sport that many students can participate in.