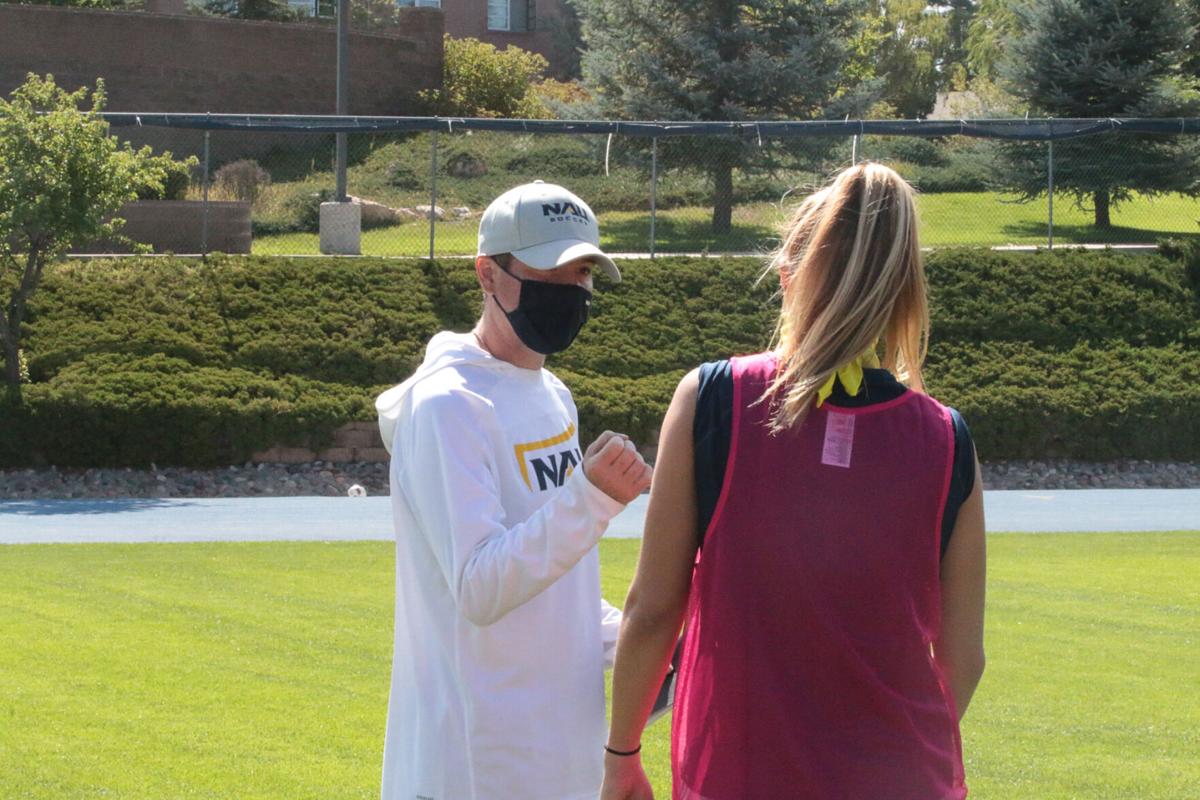 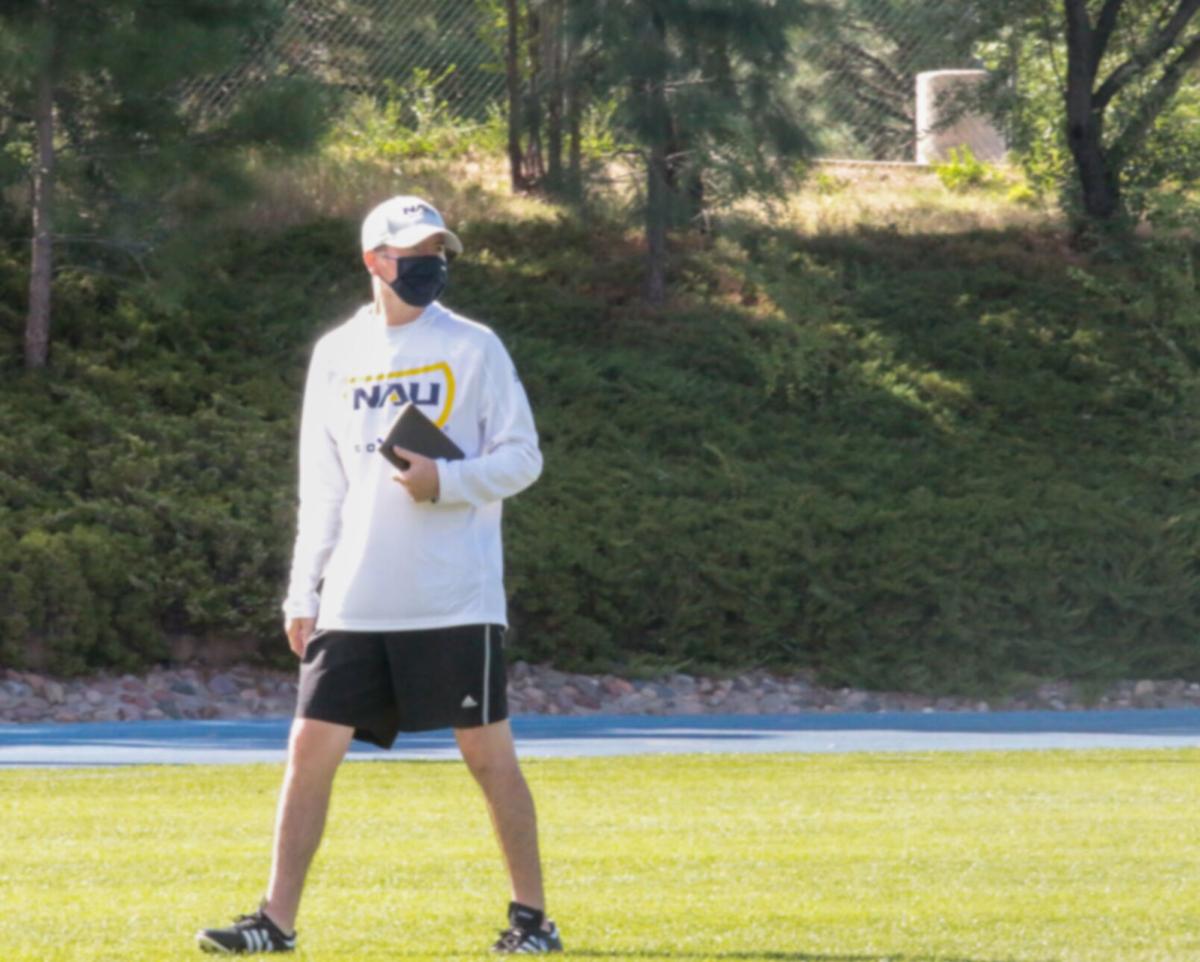 When talking to new assistant NAU soccer coach Taylor Spradling, one thing quickly becomes clear about his coaching: relationships. The former Big East champion had a clear emphasis not just on his relationship with the players, but the coaching staff around him and everyone else that he interacts with ­— and it showed when talking to anyone who had been in his presence.

Spradling, who will be stepping in as the new recruiting coordinator and assistant coach, had been the goalkeeping director at Xavier University in Ohio since 2017. In his three seasons there the Musketeers excelled, finishing last season as Big East champions, the first title in school history. In his time there, one of the players he worked closest with was goalkeeper Olivia Jenkins.

Jenkins was the first player Spradling recruited at Xavier, beginning his work with her in the first few weeks of his time there.

“He was very involved in my recruiting,” Jenkins said. “During my visit, I could tell that he cared and would be a fun coach to play for.”

The two had a clear chemistry. Both brought up Spradling’s shooting ability, though they had different opinions about the quality.

Spradling was no slouch of a player during his time at  Northern Kentucky University, and his brief professional career with the Cincinnati Kings. However, in his first professional season, Spradling suffered a career-ending head injury that would change his life forever. While most people would perhaps view an injury like this as a curse, especially one of such severity, Spradling did not seem to let it affect him.

“It’s probably the best thing that ever happened to me,” Spradling said. “Of course I would never wish injuries or significant moments like that on peoples playing careers, but it was something that happened and you move on.”

Spradling has a unique optimism and talked about how he trusts the coaches around him, the great attitude of the players and how grateful he is for his past and the people that have helped him along the way. Jenkins mentioned that as well, and said his positive attitude makes him easy to go to and helps build their relationship.

Relationships were also a key role in what brought Spradling across the country. Head coach Kylie Louw is one of the many reasons why he is excited to coach the Lumberjacks.

“She absolutely sold me on where the program was headed,” Spradling said. “It was very difficult not to feel the passion, so that got me excited.”

Louw mentioned that during the hiring process, she used the unorthodox method of giving some of the team leadership an opportunity to meet Spradling and the other candidates for the job.

Ultimately, Spradling became the choice. Louw said she felt that due to the similarities of the programs and the success that Spradling had at Xavier, “it became obvious that it would be an easy transition and a good fit for both sides.” The other thing that set Spradling apart from the other candidates was “his emphasis on relationships,” Louw said.

So, what does Spradling bring to the Lumberjacks who have remained stagnant in recent years, being unable to make the jump from contender to title favorites in the Big Sky Conference? First, Spradling will step into a new coaching role, moving out to work with the defense. Though this is a new role, both he and Louw were optimistic that this would be a smooth transition due to both Spradling’s experience and the strength of the coaching staff.

Spradling will also be working closely with fellow new assistant coach Ali Conquest, which should shorten the learning curve. The reality, however, is that Spradling will likely see the greatest impact and responsibility in his new role as recruiting coordinator.

Spradling was clear that he wants to be ambitious in his approach. While he doesn’t have the recruiting pipelines set up on the west side of the country, he still has a strong connection to the East Coast and Midwest that he plans to use to strengthen the Lumberjacks in the coming years. This may be vital in the early days, until Spradling can establish those strong connections on the West Coast. Still, Spradling feels that he will not need to rely on those old connections.

“I don’t think it’s a priority, but are we gonna try and pull kids from there? Absolutely,” Spradling said. “We’re always looking for great talent.”

Spradling will have some work to do, as this is the furthest west he’s been for a coaching job, but he seems excited for the start of the new challenge, season and relationships.

While the Lumberjacks have not seen the success that they hope for, the changes to the coaching staff are a clear indication of a focus to get the team to the next level. Last season, the Lumberjacks could not hold onto momentum, but with a more experienced roster this season, they should look stronger come the postponed spring season.

The coaching staff, outside of head coach Kylie Louw, has gone through a major revamp with two new assistants stepping in. With the additional time to adjust due to the impacts of COVID-19, the staff will have to get creative in these unprecedented times.