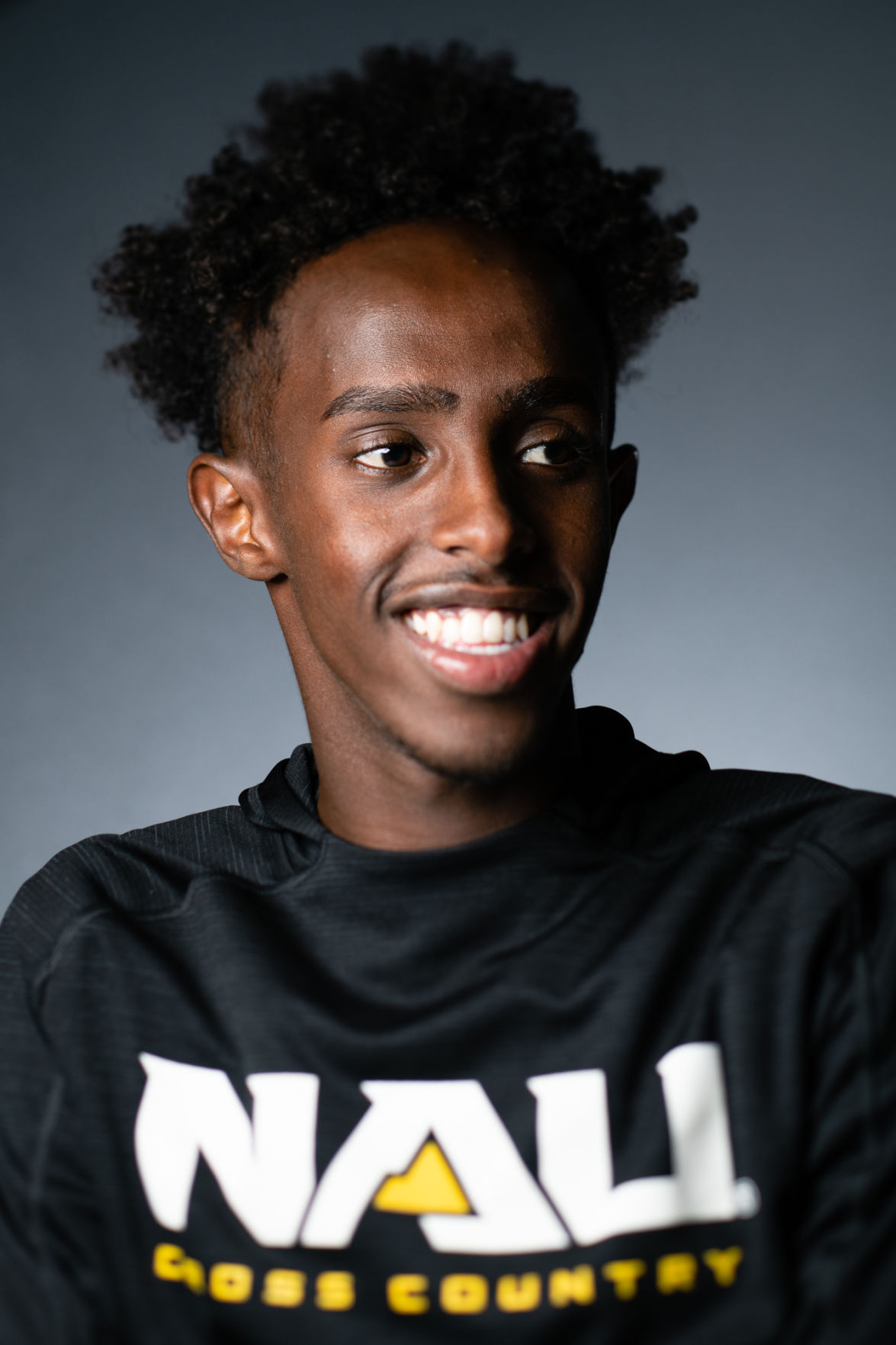 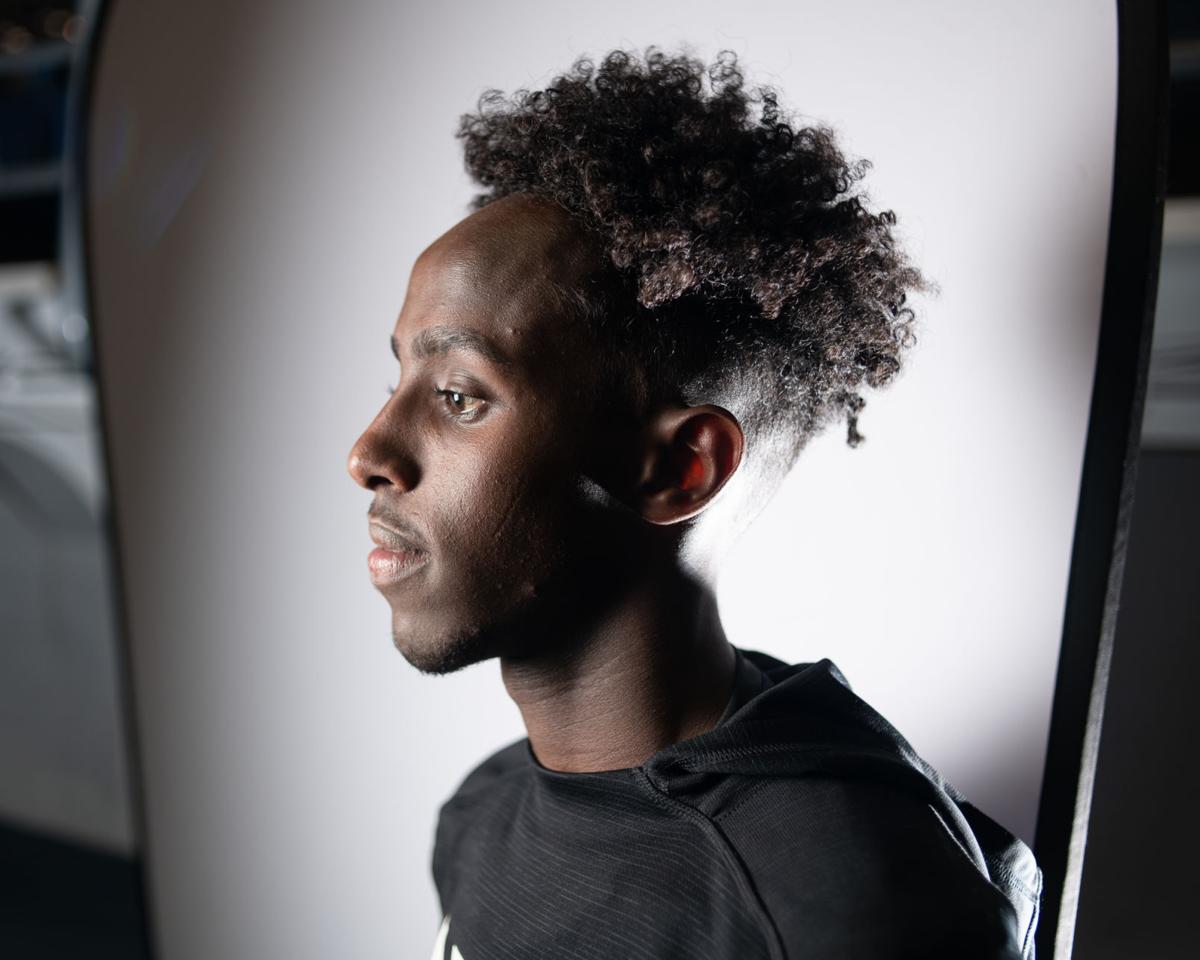 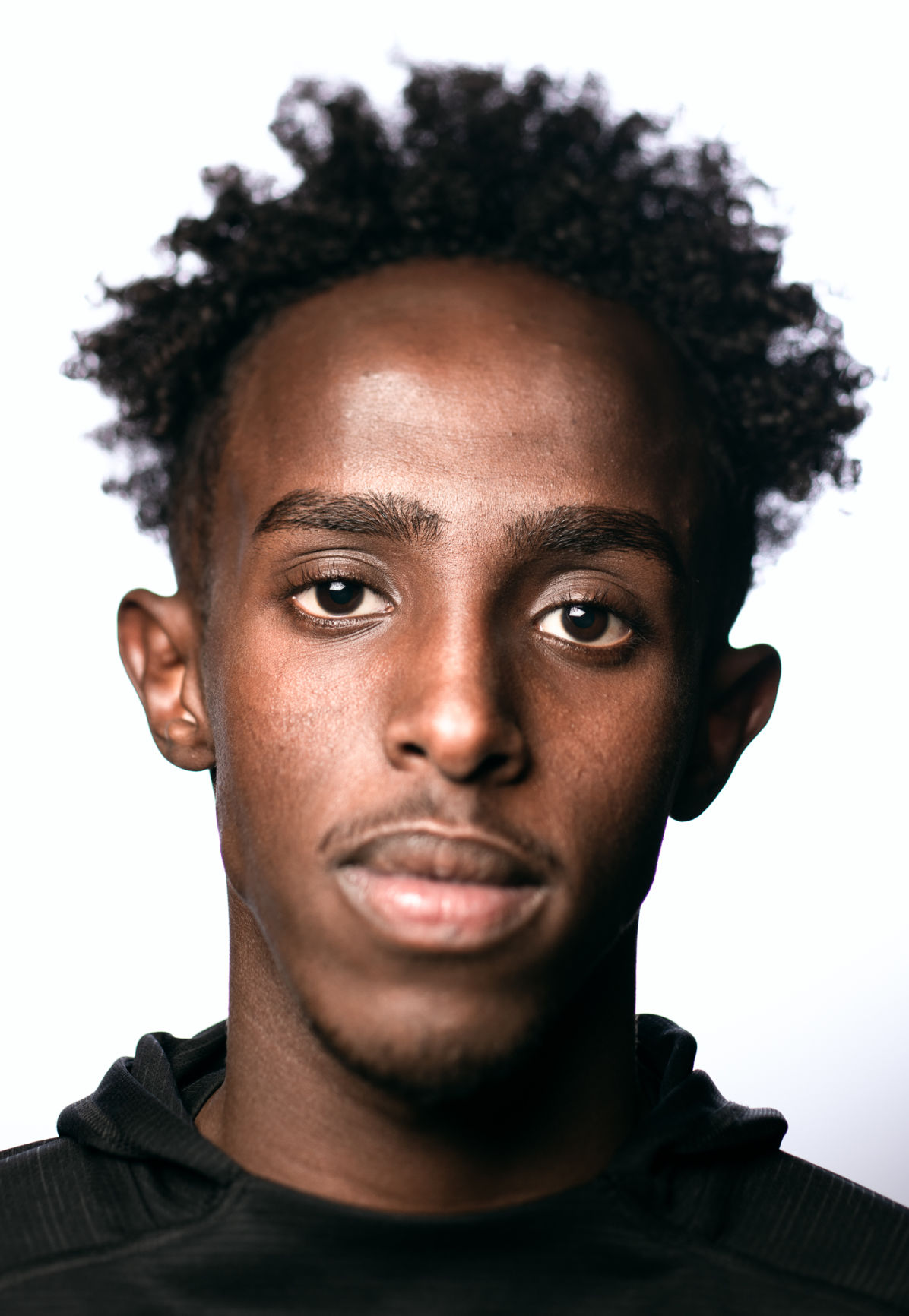 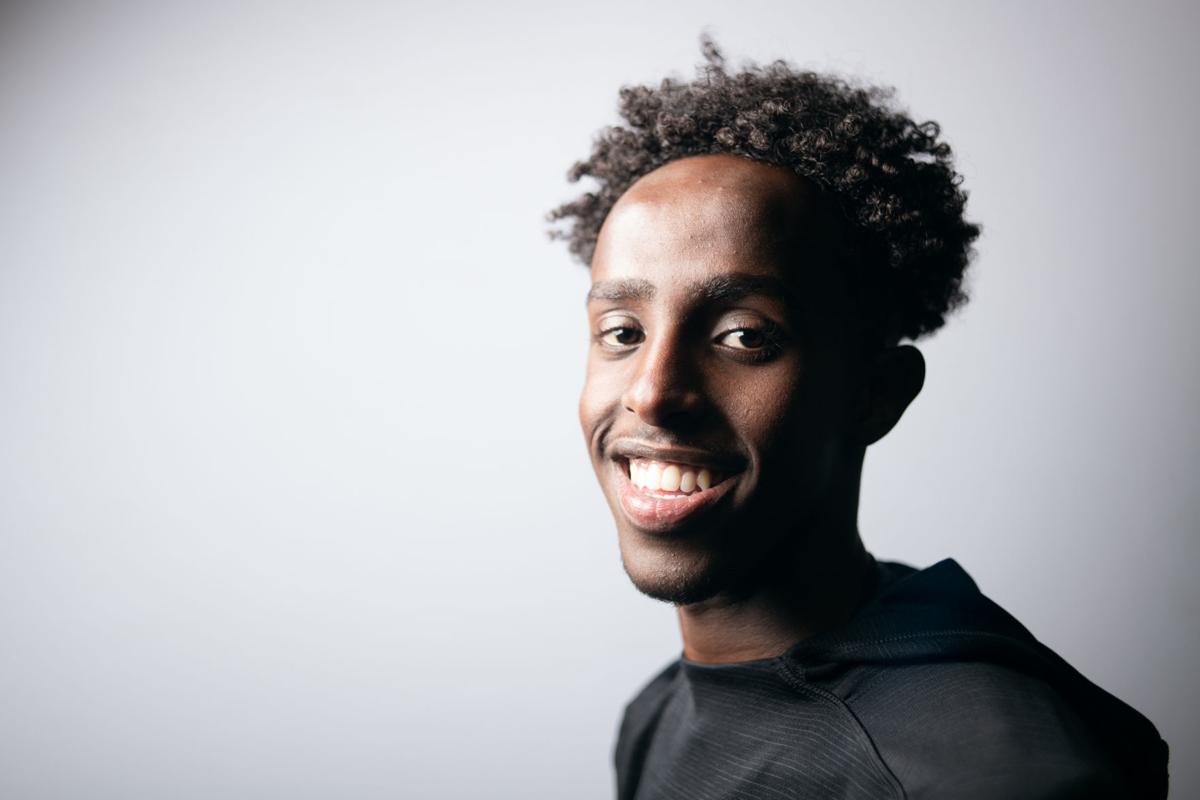 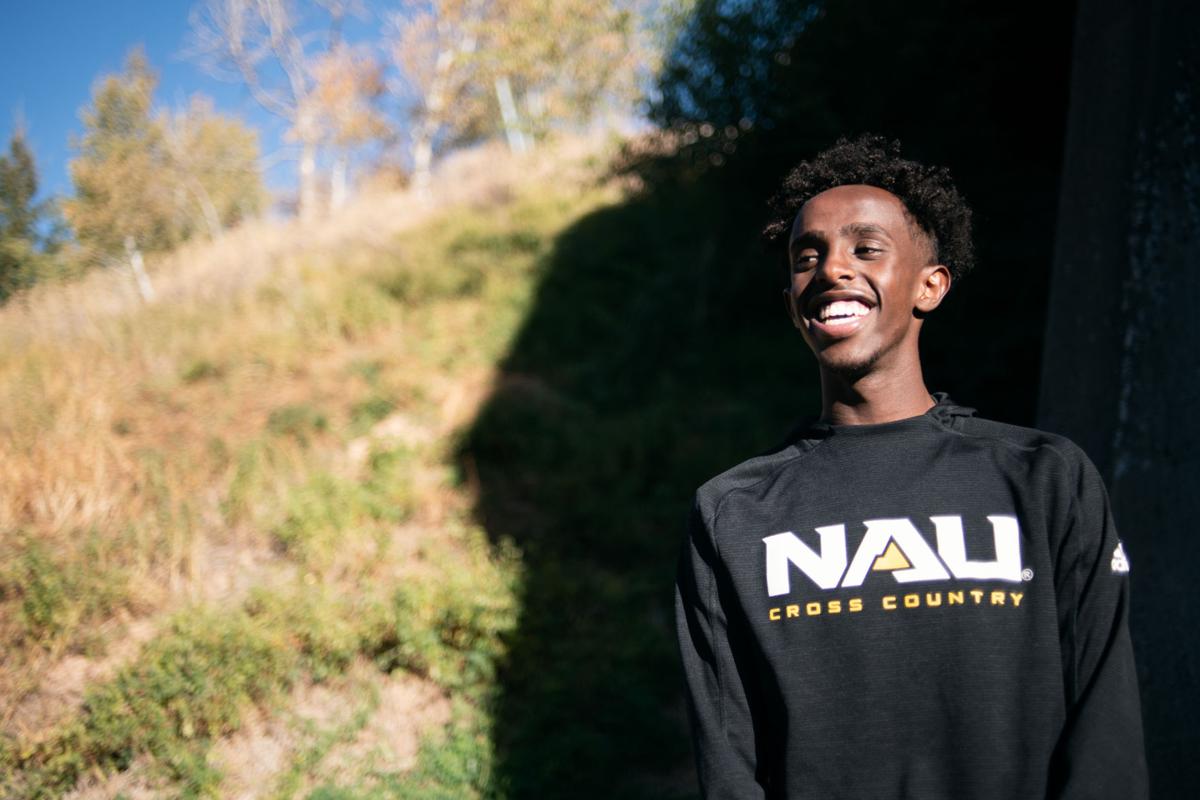 When he arrived in Flagstaff to join the three-time defending national champions NAU cross-country team, freshman runner Abdihamid Nur was welcomed with open arms. Standing slightly shorter than the rest of the pack, you can find Nur at the front of any race. His yellow uniform sticks out like a sore thumb in a sea of green, blue, red, all hustling down the trail. Unlike his fellow runners, Nur’s arrival to NAU was not the strangest transition he’s made.

The first chapter of Nur’s journey to Flagstaff began in Mogadishu, Somalia.

Mogadishu is the capital of Somalia and home to over 11.2 million people, the majority identifying themselves as Sunni Muslims. Affected by instability and famine, the country has seen little to no peace over the past two decades of civil war.

For Nur, there is not much he remembers about his home country, but he keeps in contact with his family back home and is concerned about their safety often.

Nur left Mogadishu at a very young age to live in Cairo, Egypt for about five years before he landed in Phoenix, which became his home and the place where he discovered his athletic gifts.

Before Nur put on the running shoes and became a cross-country runner, he could be found in a pair of soccer cleats and shin guards. Nur attributed sports for his smooth transition to the United States by allowing him to acclimate to a new culture.

Nur’s passion for running was not something he immediately discovered but instead was born from catastrophic beginnings. Shortly after trying out for the soccer team at North High School in Phoenix, he found himself in a nearly fatal car accident.

“[The accident] really messed me up really bad,” Nur said. “I was out for the whole season and couldn’t go to school for three months. It was a really bad time for me.”

After missing the entire season due to being bedridden for months, Nur returned determined to get back on the field by any means necessary. With a hunger to make a strong comeback, Nur was ready and willing to do anything to get back to his previous shape.

As Nur trained to make his comeback for the upcoming soccer season, he was advised by his coach to take up cross-country as a way to get back into shape. As he began to get his feet under him again, he started to notice something. Just north of campus at Buffalo Park, Nur and his coach came across a life-changing revelation.

“My first meet was here in Flagstaff,” Nur said. “I got third place. I saw how good I was, and my coach said, ‘Let’s do this. Forget about soccer — you can do this.’”

Nur found a new direction in running that set him on a course to the championships. He won the AIA Division I State Championship his senior year of high school and created a plethora of opportunities thereafter.

“Winning the state championship was big for me,” Nur said. “That opened up opportunities to college and a lot potential that I never thought of before that.”

Nur is now a freshman runner at the most elite running program in the nation, according to the NCAA national rankings. Nur fits right in. At their last meet, he finished ninth in the men’s pack at the Nuttycombe Invitational in Madison, Wisconsin in 23:48.6 — a 0.1 second behind senior runner Geordie Beamish, who finished eighth with a 23:48.5 time.

Those involved in the program have praised the budding freshman. Among the staff, there’s only been discussion of his potential as a runner in this year’s championship, as well as others after.

NAU cross-country head coach Michael Smith said Nur is an integral part of the Lumberjack team and one of the key pieces to the next generation of championship contenders the program’s staff is putting together.

“Nur initially came to NAU as a nonqualifier, so he wasn’t able to compete right away, and that time allowed him to focus on his school work and his training,” Smith said. “[Nur] got really serious in [cross country], and now he brings in a lot of ownership and a great attitude to our team. He’s really an example of someone who elevates everyone around him.”

For Nur, one major component to his growth and success as a runner is the relationship with his coaches, bonding and being open to the different styles of teaching that each brings to the table. Nur said while he still keeps a strong connection with his former high school coach, he described Smith as an instrumental part in his growth as a runner, calling him a near-father figure.

“[Smith] is more than a coach to me,” Nur said. “He’s almost like a father. He looks out for me and teaches me a lot about life. Our relationship is very little about running and a lot about life and the kind of character I should have and display.”

In addition to his coaching staff, Nur attributes his success to his relationships with his teammates.

“The results I have this year and all the things I’m showing right now comes from my teammates and how we push each other,” Nur said.

One of his teammates and closest friends, junior Luis Grijalva, is one of Nur’s top motivators and running partners. Nur said the two push each other and work to bring each other up, both as runners and as people. Nur said his team’s success comes from these types of relationships and the atmosphere that surrounds the team.

Above all, Nur said what keeps him grounded is his family.

“[My mother] is my biggest role model — the person I look up to the most,” Nur said. “I really owe all the good things about who I am from her.”

With a strong foundation from his family, in conjunction with the growth that comes from being around his teammates and coaches, Nur has a good head on his shoulders and big aspirations set for himself and his team.

“Our potential is really high,” Nur said. “I’m starting off my [running career] here at NAU, but I see myself winning a lot of titles and bringing in a lot of good for this team.”

The Lumberjacks finished the regular season with a win at the Nuttycombe Invitational Oct. 18 and are preparing for the Big Sky Conference Championship in Greely, Colorado Nov. 2. The Lumberjacks will attempt to sweep the conference championship and the NCAA Mountain Regional Championships in Salt Lake City, Utah Nov. 15.

Having taken the No. 1 spot at every meet in their schedule, the Lumberjacks are in a prime position to make NAU and NCAA history as they aim for their fourth consecutive national championship Nov. 23 in Terre Haute, Indiana.