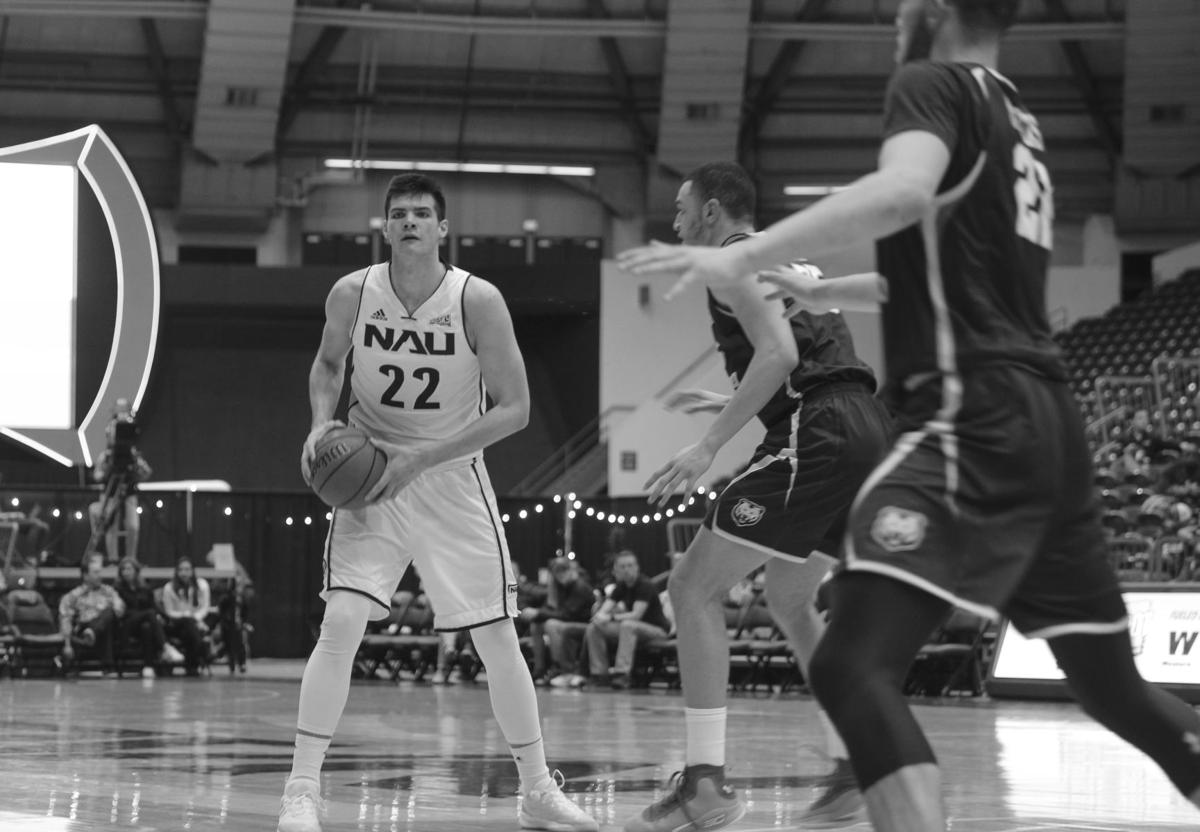 Senior forward Brooks DeBisschop (22) looks for a open shot during the second half of the game against the University of Northern Colorado Jan. 26, 2019, at the Walkup Skydome. 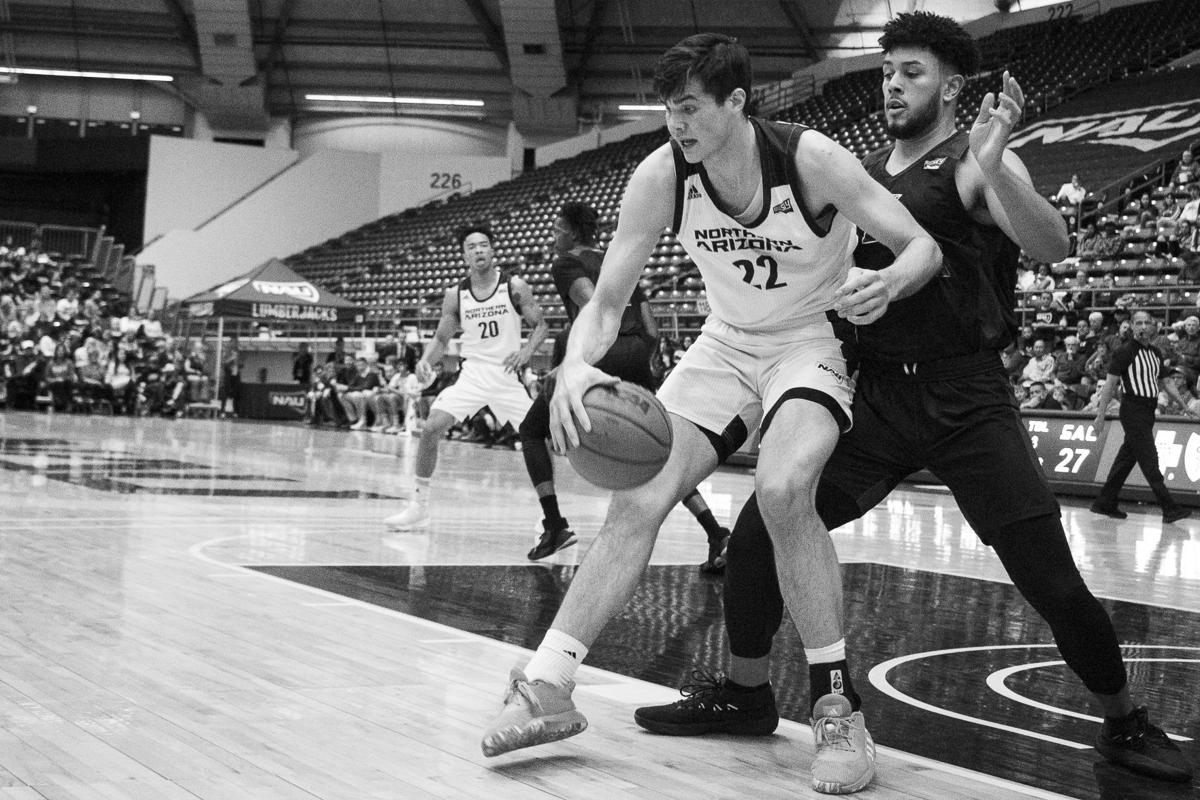 Senior forward Brooks DeBisschop (22) dribbles and turns against Sacramento State University's player in the first half of the game at the Walkup Skydome, Jan. 27. The final score was 69-54, victory for NAU.

Senior forward Brooks DeBisschop (22) looks for a open shot during the second half of the game against the University of Northern Colorado Jan. 26, 2019, at the Walkup Skydome.

Senior forward Brooks DeBisschop (22) dribbles and turns against Sacramento State University's player in the first half of the game at the Walkup Skydome, Jan. 27. The final score was 69-54, victory for NAU.

Making a mark and leaving a legacy is something few people achieve at the collegiate level. It happens when an individual’s work ethic and leadership become memorable because of the positive impact they left in the place they called home. The NAU men’s basketball team will say goodbye to senior forward Brooks DeBisschop as his senior season comes to a close.

Being around sports was common for DeBisschop growing up. His father played football at the University of Oregon and his mother grew up as a big sports fan. DeBisschop said his family was always into sports and he was always supported well at his games.

DeBisschop was a three-sport athlete at West Linn High School in West Linn, Oregon where he played football, baseball and basketball. He played baseball until his sophomore year and football until his junior year. It wasn’t until his senior year, when he fully committed to basketball, that he realized he wanted to play at the next level.

While playing Amateur Athletic Union basketball in the summer of his junior year, DeBisschop didn’t have any offers lined up until he was recruited by the University of Idaho and NAU. He also earned preferred walk-on status to the University of Oregon, but decided he wanted to play somewhere he felt he would have a more meaningful role.

DeBisschop stepped into a starting position his sophomore year at NAU and averaged 5.2 points and 7.4 rebounds per game. As each year passed, DeBisschop continued improving. In his junior year, he averaged 7 points per game (ppg) and in his senior year, he is averaging 11ppg.

“He works his butt off,” NAU interim head coach Shane Burcar said. “His scoring, rebounding and assists are stats of a player that you can see that he is getting better every year, and it’s because of his hard work and his belief in his coaches.”

Burcar wants DeBisschop to leave the program with the “never give up” mindset that he has portrayed throughout his final year. Burcar said it was difficult for DeBisschop coming into summer ball and learning that he was going to have an interim head coach, but his attitude did not change since he has the mindset of a winner.

“That’s what successful people do,” Burcar said. “I have a saying, ‘winners win,’ and Brooks DeBisschop is a winner.”

The young players who came into the program have taken notice of the senior’s leadership. DeBisschop has welcomed the newcomers into the program with open arms and has helped prepare them along the way.

“When I first got here, he was helping me with plays and defensive rotations,” freshman guard Isaiah Lewis said. “He is a good vocal leader and demonstrates how to do it right, too. He’s a good guy to follow.”

Redshirt sophomore forward Nik Mains plays the same position as DeBisschop and has been able to learn from him during practices and games.

“He’s one of the smartest players I have ever played with. His IQ is unreal,” Mains said. “He’s always teaching me in the game of defense, where to be on offense and helping me improve my game every day.”

DeBisschop’s high IQ is not limited to just basketball — he is one of three people in program history to be named an Academic All-American.

DeBisschop said West Linn prepared him well and challenged the students mentally. In his first semester at NAU, he got one B and the rest were A’s. He was soon told he had a great opportunity to become an Academic All-American and since then, he has never received a grade lower than an A in any of his classes.

“I’ve always been a pretty good student,” DeBisschop said. “I went to a high school with high expectations and there were a lot of good students.”

With DeBisschop’s career coming to a close, he has cherished a lot of the memories he has gained since joining the basketball team. Although his most memorable season has been the current one, he said he is trying to cherish every minute and every moment since there isn’t much left.

DeBisschop’s plans after college are to either play professional basketball in the NBA or overseas.

“If you have a plan A and a plan B, then you’re kidding yourself,” DeBisschop said. “You’ve got to put everything into one plan. I haven’t applied to any jobs and I am not going to. I am just going to try and play basketball.”

DeBisschop and the Lumberjacks are winding down their season as they have eight more conference games until the end of their season. NAU enters the last month of the season with an 12-8 overall record and a 6-5 conference record. The Lumberjacks Senior Night is against Montana State University Feb. 24 at the Walkup Skydome.

In his final games, DeBisschop and the rest of the NAU men’s basketball team only have one goal on their minds: Win a conference championship and make it to the NCAA Tournament.