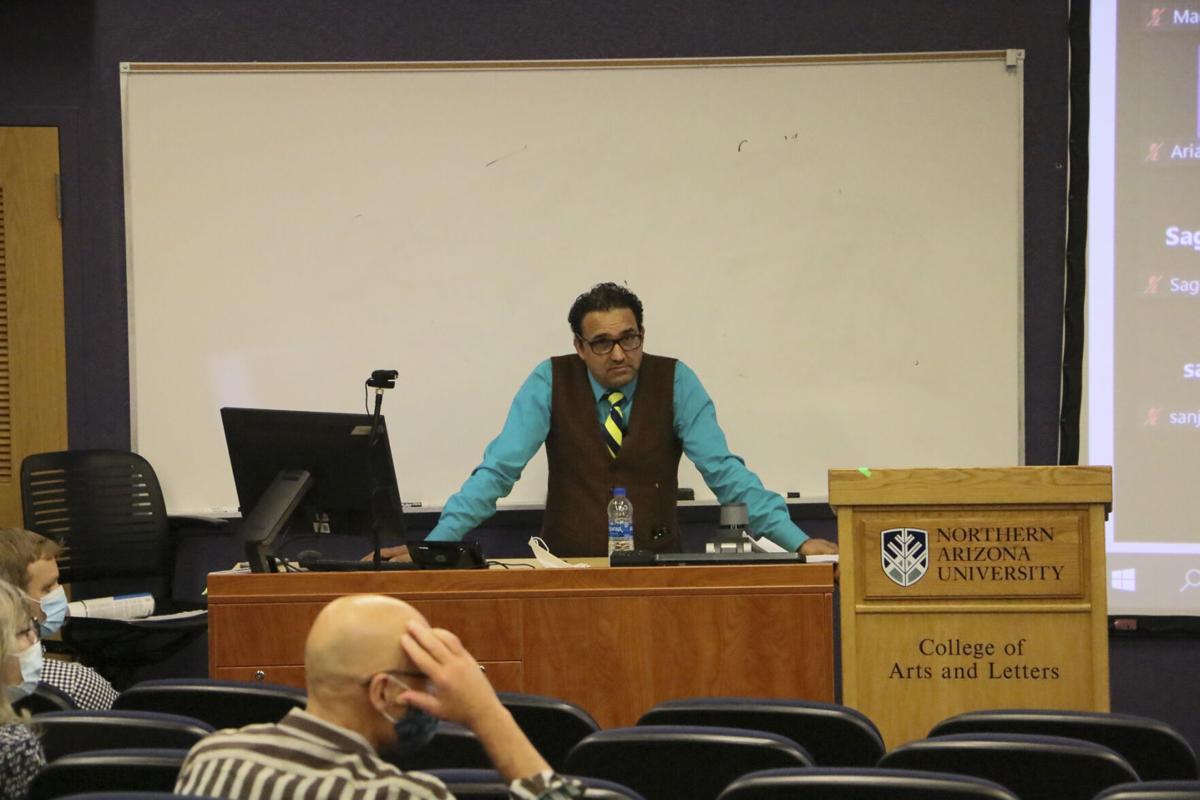 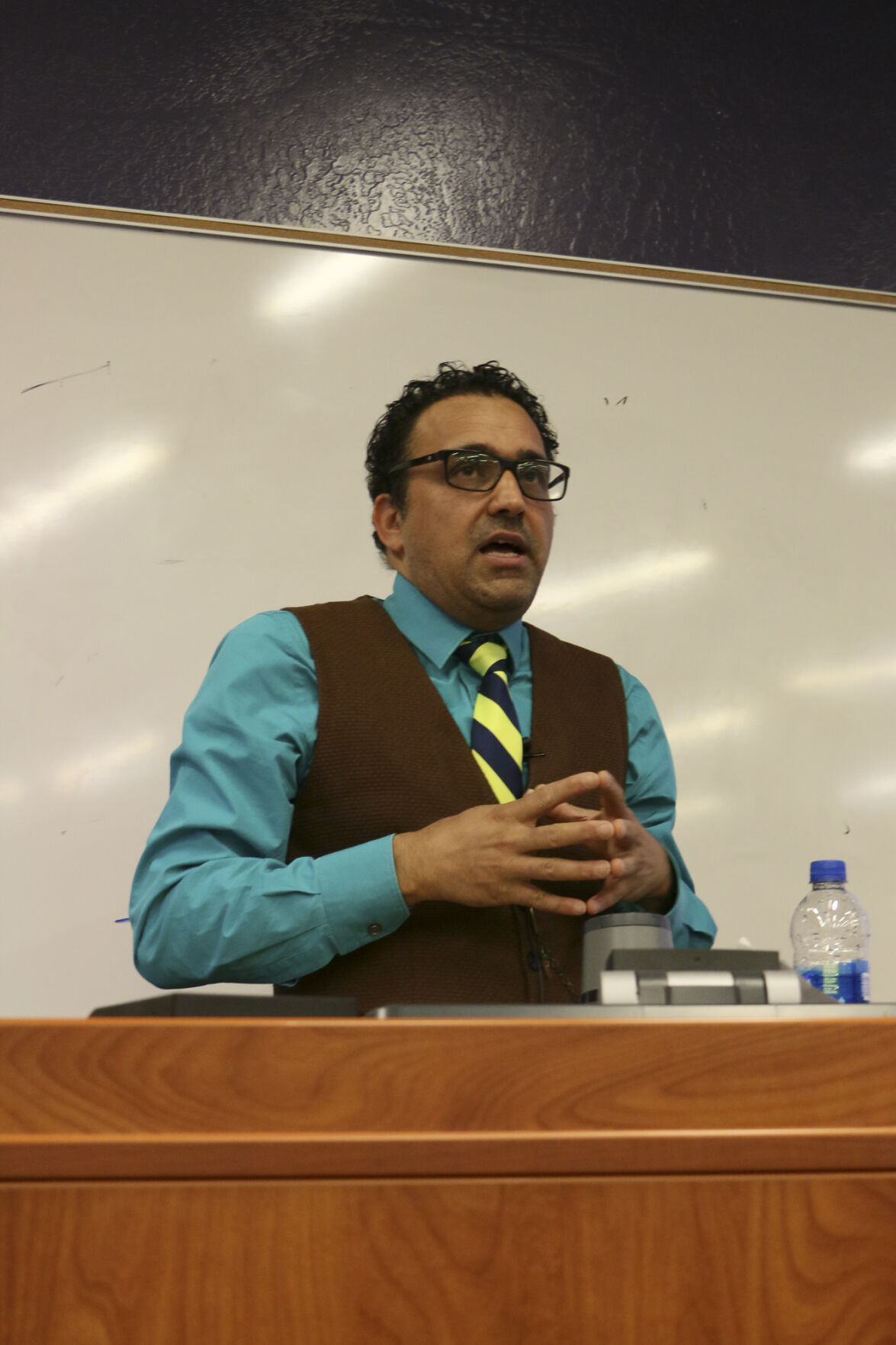 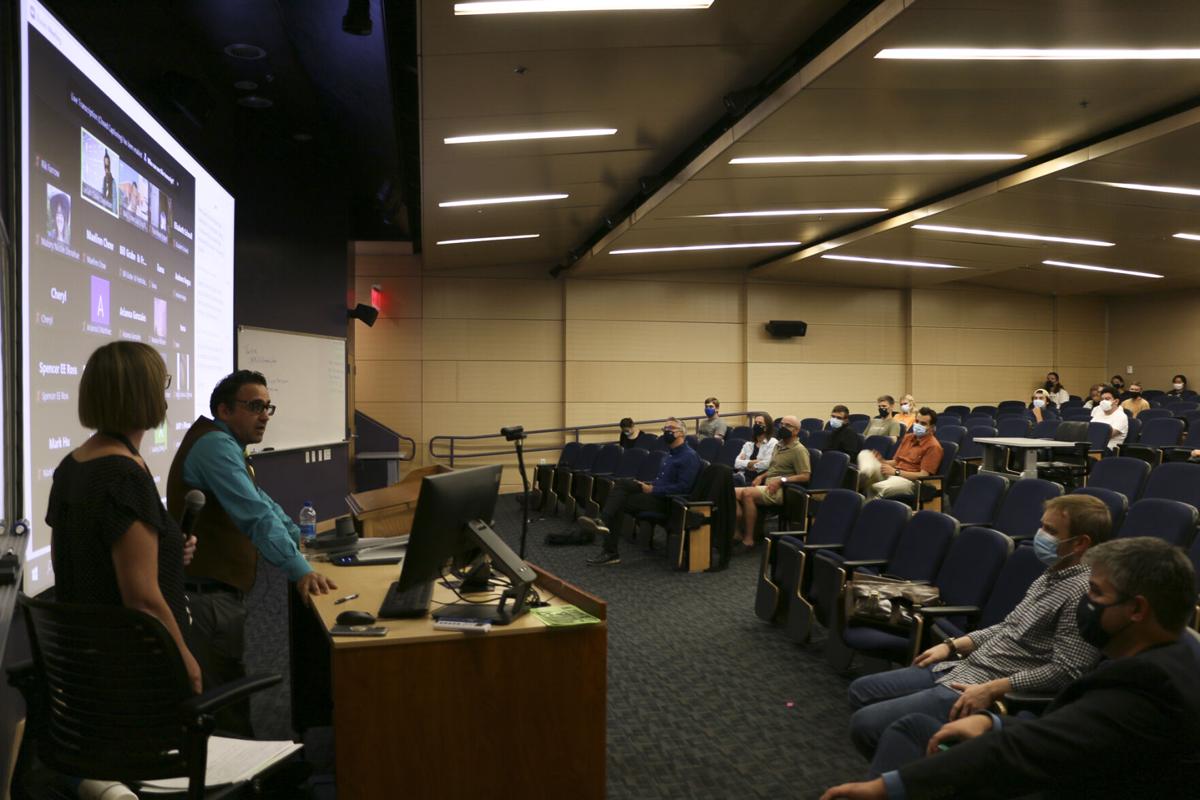 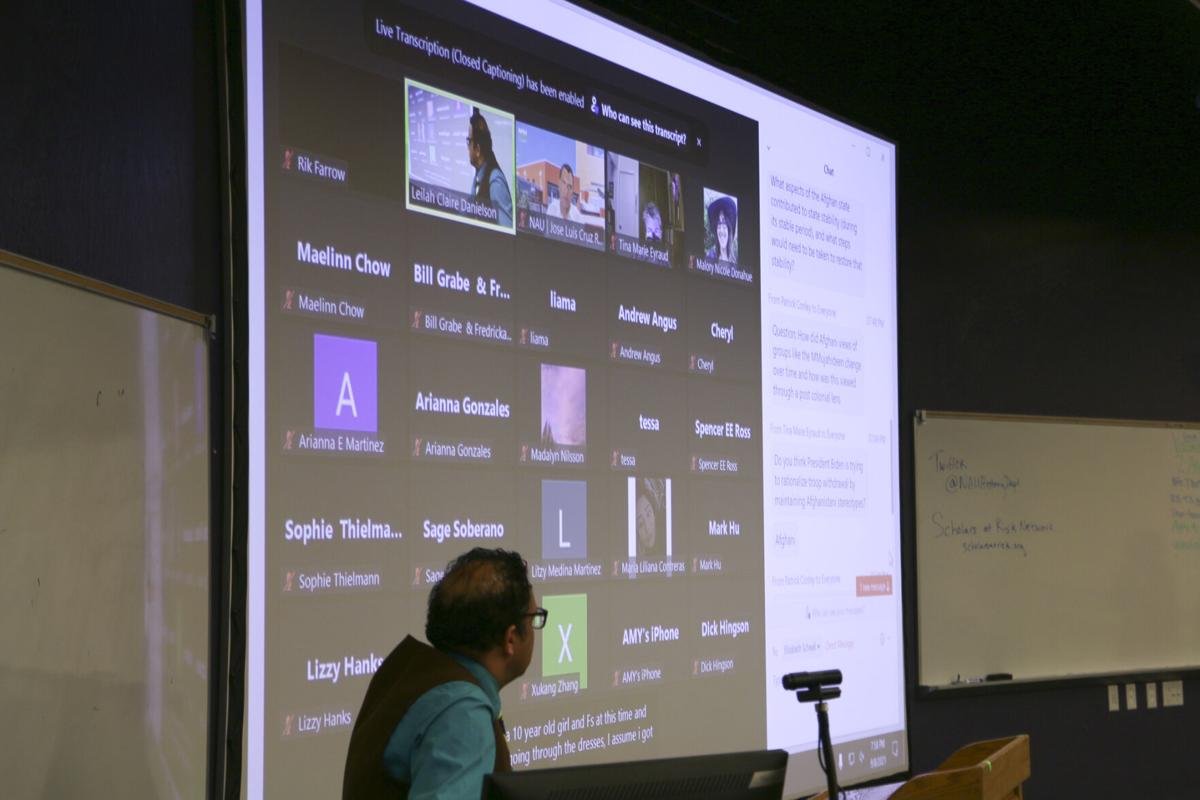 About 60 additional people attended Dr. Naim's lecture via Zoom and he entertained their questions too, Sept. 9. 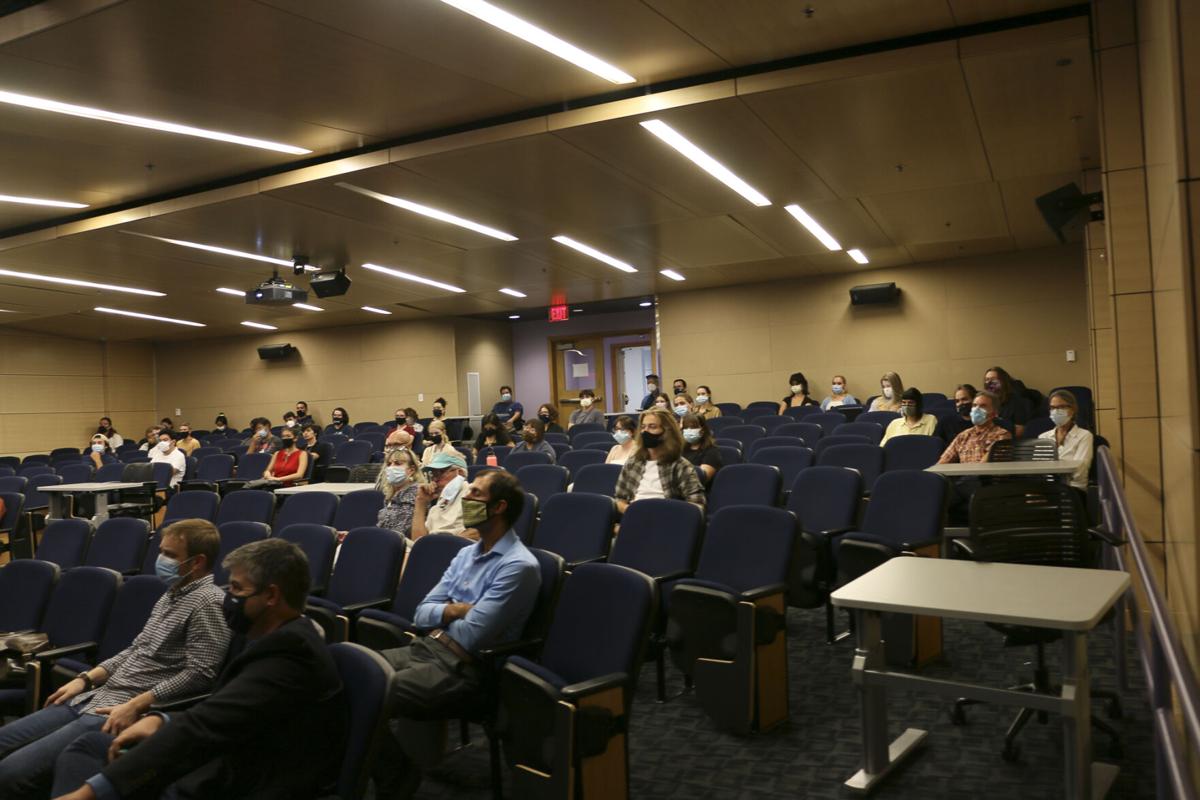 About 60 additional people attended Dr. Naim's lecture via Zoom and he entertained their questions too, Sept. 9.

Following the U.S. military withdrawal from Afghanistan, the Taliban has retaken control much faster than anyone anticipated. Despite not being a widely held view, some are blaming Afghans themselves for the Taliban’s resurgence and falling back on the old stereotype that “Afghanistan is stuck in the past.”

Department of History Lecturer Hakeem Naim said this stereotype is even affecting how President Joe Biden views the situation in Afghanistan. On Sept. 8 in Liberal Arts, he presented his case.

Despite current claims that he never supported nation-building, Biden made other statements in a 2001 interview, including that it was a mistake not to invade after the Soviets left in the late 1980s. He believed it gave the Taliban an opportunity to come into power.

“The complexity of modern Afghanistan history comes from the dehumanized process of knowledge production on Afghanistan,” Naim said. “The constant wars and interventions of foreign powers dictated what questions have been asked rather than asking and telling the stories of people, their struggles and their history.”

Naim was born in Afghanistan two years before the Soviet invasion, and he lived through both U.S. and USSR occupations, as well as three civil wars. Due to foreign intervention and activity, Naim said the world’s view of his home has changed multiple times.

Among these perspectives are British colonizers labeling the Afghans as south Asians, the Soviets believing that Afghanistan was simply another Soviet satellite and our own nation considering the country part of the Middle East. There has been no shortage of foreign intervention with preconceived ideas.

“The geography that’s Afghanistan goes back to a thousand years ago,” Naim said. “It was populated by different groups, was a center of trade, a center of immigration and a center of civilization for all of the surrounding regions including the Middle East, south Asia and central Asia.”

Due to this history, Naim said there are over 40 different ethnic groups and 10 languages spoken in the country today. He added that, despite this diversity, the country is not made up of fragmented tribes but is indeed modern and unified.

Unfortunately, some still cling to the Afghanistan stereotypes and use them as an excuse to explain how the Taliban was able to take power in the country once again. In an Aug. 16 speech, President Biden placed some blame on Afghans themselves.

“We gave them every chance to determine their own future,” Biden said. “We could not provide them with the will to fight for that future.”

The Taliban first came to power following two civil wars in the early 1990s, when the provisional government was weak. Ironically, the U.S. helped to train and arm many Taliban fighters during the 1980s, when they were part of the Mujahideen that battled the Soviet invasion.

Although this armament began during the last year of President Jimmy Carter’s administration, President Ronald Reagan increased the Americans’ presence throughout his two terms in an effort to destabilize the Soviet Union.

However, the U.S. impacted areas separate from weapons and militarization, including religious teachings.

“The most dangerous policy of anti-Soviet war was to organize religious schools in which they [the students] were taught jihadi [religious extremist] lessons,” Naim said.

This plan was the brainchild of former CIA director William J. Casey, who was convinced that the Soviets, who had atheist tendencies, should be suppressed by religious believers — no matter the religion. By the time he finished, over 25,000 informal religious schools were set up.

Once the Soviet Union finally collapsed, most of the western world subsequently forgot about Afghanistan, and the civil wars of the early 1990s began enabling the Taliban to take power.

Suddenly the U.S. was interested in Afghanistan again, and the war on terror began. The Taliban was initially deposed and defeated, but never destroyed. While the U.S. may have intended to spread democracy following its invasion, all attempts to establish such a structure failed, mainly due to corruption.

Naim said it was no surprise that the provisional government the U.S. helped set up collapsed so quickly last month. Even before the Taliban’s resurgence, he added this structure lacked a good foundation to stand on.

In February 2020, President Donald Trump negotiated and agreed to a deal with the Taliban, which was also dangerous because it helped to legitimize their power as a major political force in the region. In order to promote peace talks with the Afghan government, 5,000 Taliban prisoners were released.

Whatever the future holds for Afghanistan, Naim said he does not believe the Taliban has changed — as the group claims — but holds hope that its political power will not have the same control it used to.

“The Taliban will not and cannot rule as they did in the 90s,” Naim said. “It’s not because they have changed; that’s a false assumption. The Taliban has not changed, and they cannot change. We have a group of people who can resist nonviolently, and the Taliban is very scared of them. And that is the Afghan woman.”

The women in Afghanistan are already protesting and facing backlash from the Taliban.

Naim said he hopes the mistaken ideas that Afghans are unchangeable, and that the country is frozen in time, can be corrected, but we must be the ones to change our views of the country. Above all, he said we must realize they are human — just like we are.