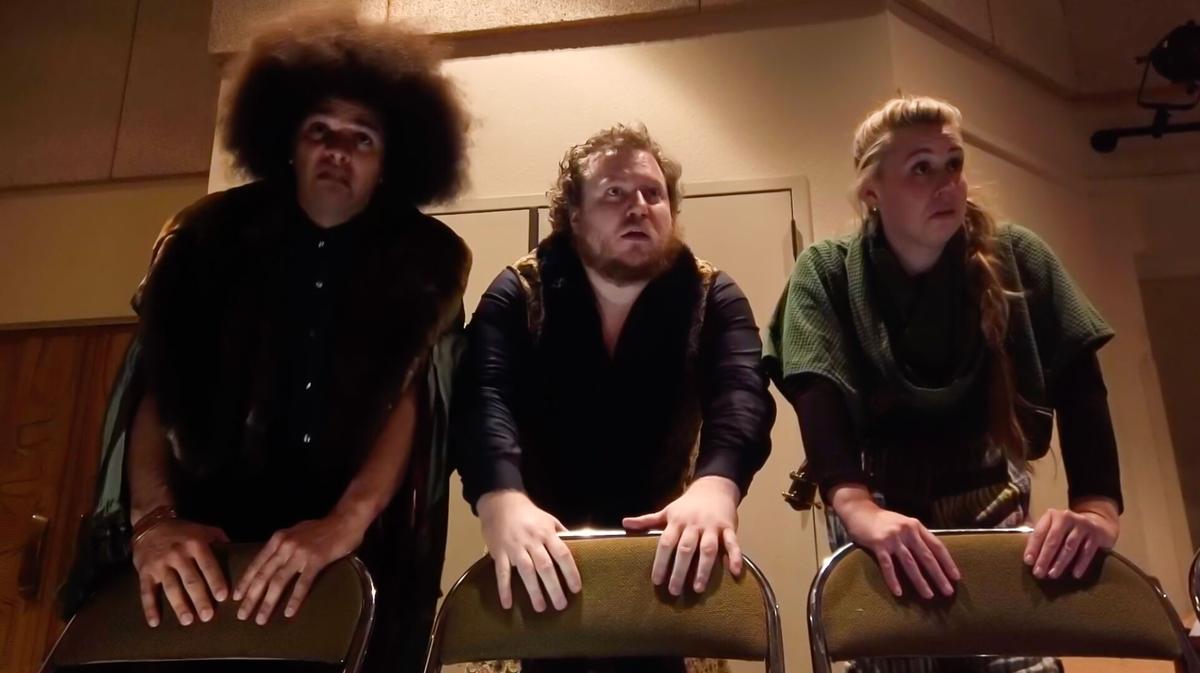 Actors Edward Peace Jr., James Cougar Canfield and Hannah Fontes spy on another cast member from within the audience during “Twelfth Night,” which was digitally released by the Flagstaff Shakespeare Festival, Feb. 12. 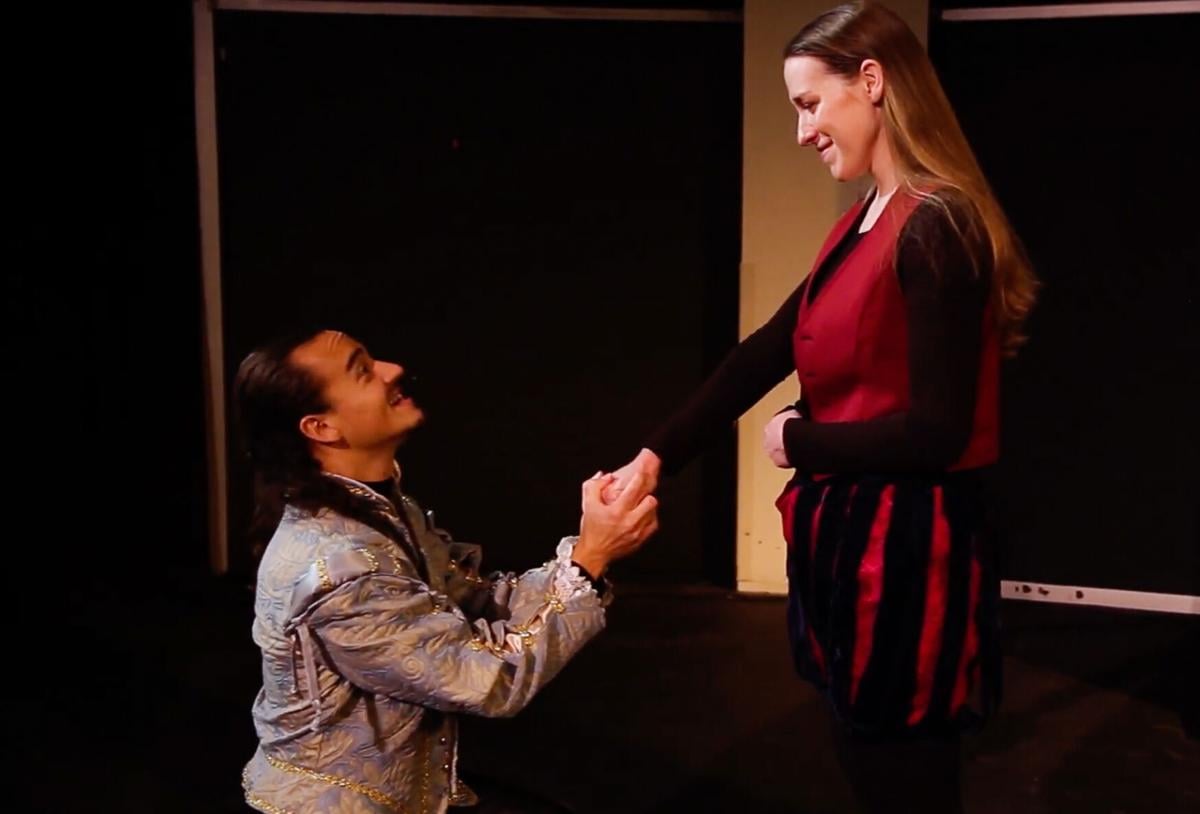 Nick Marchetti’s character Duke Orsino proposes to Viola, played by Cadence Lamb, during "Twelfth Night," which was digitally released by the Flagstaff Shakespeare Festival on Feb. 12.

Actors Edward Peace Jr., James Cougar Canfield and Hannah Fontes spy on another cast member from within the audience during “Twelfth Night,” which was digitally released by the Flagstaff Shakespeare Festival, Feb. 12.

Nick Marchetti’s character Duke Orsino proposes to Viola, played by Cadence Lamb, during "Twelfth Night," which was digitally released by the Flagstaff Shakespeare Festival on Feb. 12.

The company recently released a virtual showing of William Shakespeare’s classic comedy, “Twelfth Night,” which follows Viola, a woman who dresses as a man to find a job and becomes a servant to Duke Orsino. Meanwhile, the duke is in love with Lady Olivia, who is crushing on Viola, who she believes to be the male, Cesario. Chaos ensues as characters begin to fall in love with other characters who are all unaware of Viola’s true identity.

“Twelfth Night” has been available for purchase and streaming since Feb. 12, and tickets are still available on the FlagShakes website. The show is directed by Jim Warren, a distinguished Shakespearean director and former owner of the American Shakespeare Center’s Blackfriars Playhouse, a performing arts theater in Staunton, Virginia that is “the world’s only recreation of Shakespeare’s indoor theater,” according to its website.

Warren and other cast members stress FlagShakes “Twelfth Night” is not like the often dreaded Shakespeare experience felt by students when the plays are taught in school.

“We often have not-so-great introductions to [Shakespeare] in high school when we’re forced to study some of his plays in English class,” Warren said. “We often walk away from those experiences thinking that the language is some kind of weird poetry written in another language. Shakespeare wrote plays to be seen and heard in live performance, not books to be read in English class.”

James Cougar Canfield, who is cast in the play as Sir Toby and Antonio, said he agrees.

“What I want the public to know is that ‘Twelfth Night’ is hilarious and silly as all heck,” Canfield said of the virtual performance. “Sometimes Shakespeare can feel a bit old and stale, but this play and this production is goofy, fun and heartfelt.”

Cadence Lamb, who plays the lead of Viola, as well as Sebastian, emphasized that a Shakespeare play can actually allow for creativity.

“I love acting Shakespeare for a lot of reasons,” Lamb said. “The craft of acting his text is meticulous and detailed work, but I’ve found it liberating because of its boundaries.”

This was the first full-scale production for FlagShakes since March 2020. Although virtual, the show still encompassed the veracious nature of a Shakespeare play. According to its website, the company upholds Shakespeare’s vision by using universal lighting, cross-gender casting and other things like minimal sets and special effects. This all gives the effect of what the play would have been like back in the 1600s.

COVID-19 has impacted the arts all around the country and FlagShakes was no different. The pandemic was taken seriously by everyone involved at the company, seen in the halt of live performances.

“I believe that theater fosters empathy, and this year definitely needed some empathy fostering,” Lamb said.

Although live performances came to a stop, Warren said that him and the entire cast are trying their best to bring the authentic experience of the live theater to the online medium.

On top of pandemic safety, other topics like consent and cultural equity are principles the Flagstaff Shakespeare Festival upholds.

Actor Edward Peace Jr., who was cast as Sir Andrew Aguecheek, said the cast took great importance in consent behind the scenes.

“All moments where actors touched were talked about and everyone’s boundaries were established,” Peace said. “We also talked about various moments that could be problematic, such as making comments about my hair, which is an afro.”

Cultural equity is stressed by FlagShakes seen in the list of commitments found on its website, as well as a message of respect toward Native Americans seen at the beginning of the virtual performance.

The message at the beginning of “Twelfth Night'' acknowledges that this play taking place in Flagstaff means it is taking place on Sacred Space and recognizes the injustices of the Hopi, White Mountain Apache, Navajo and other neighboring tribes. On its website, a list of other commitments can be found that the company upholds in order to maintain diversity and representation among casts.

“Twelfth Night” kicked off FlagShakes’ seventh season of production in Flagstaff. FlagShakes also has a drive-in performance of “Twelfth Night” May 22 at the Coconino Center for the Arts. Other performances like “A Midsummer Night’s Dream” and “Hamlet” are coming to Flagstaff this summer.