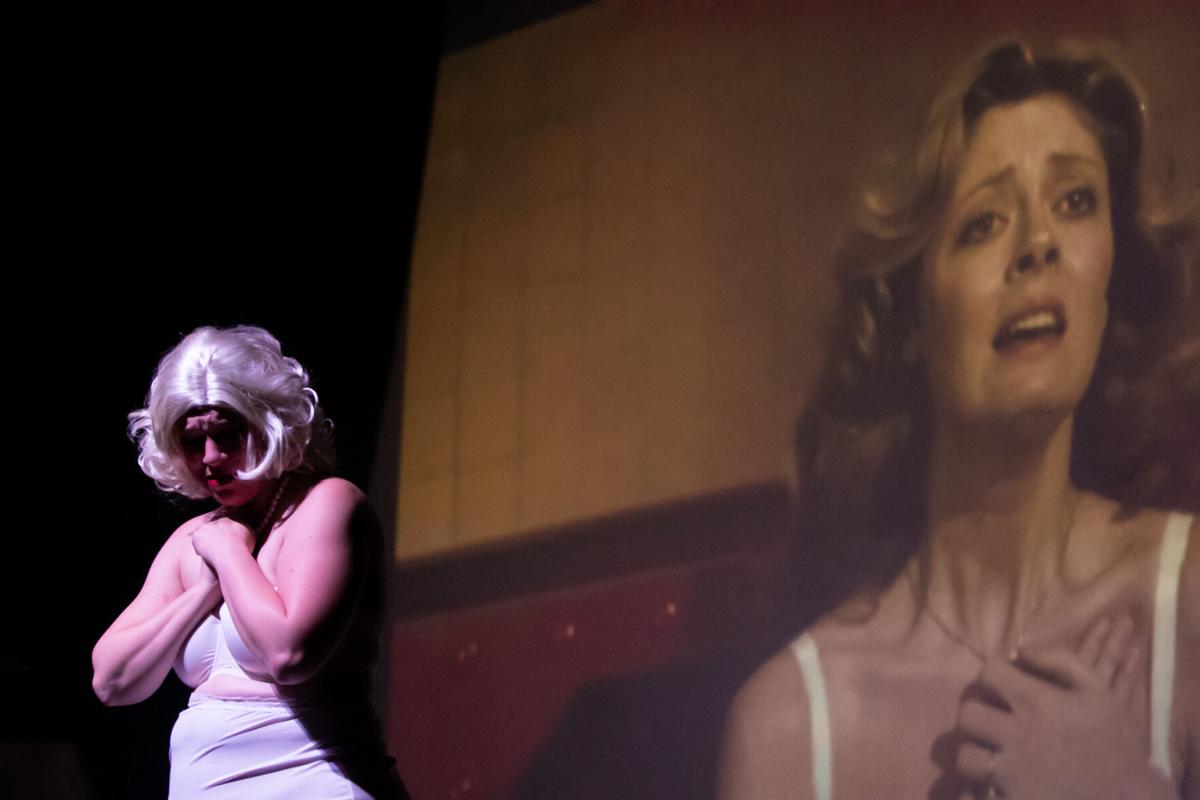 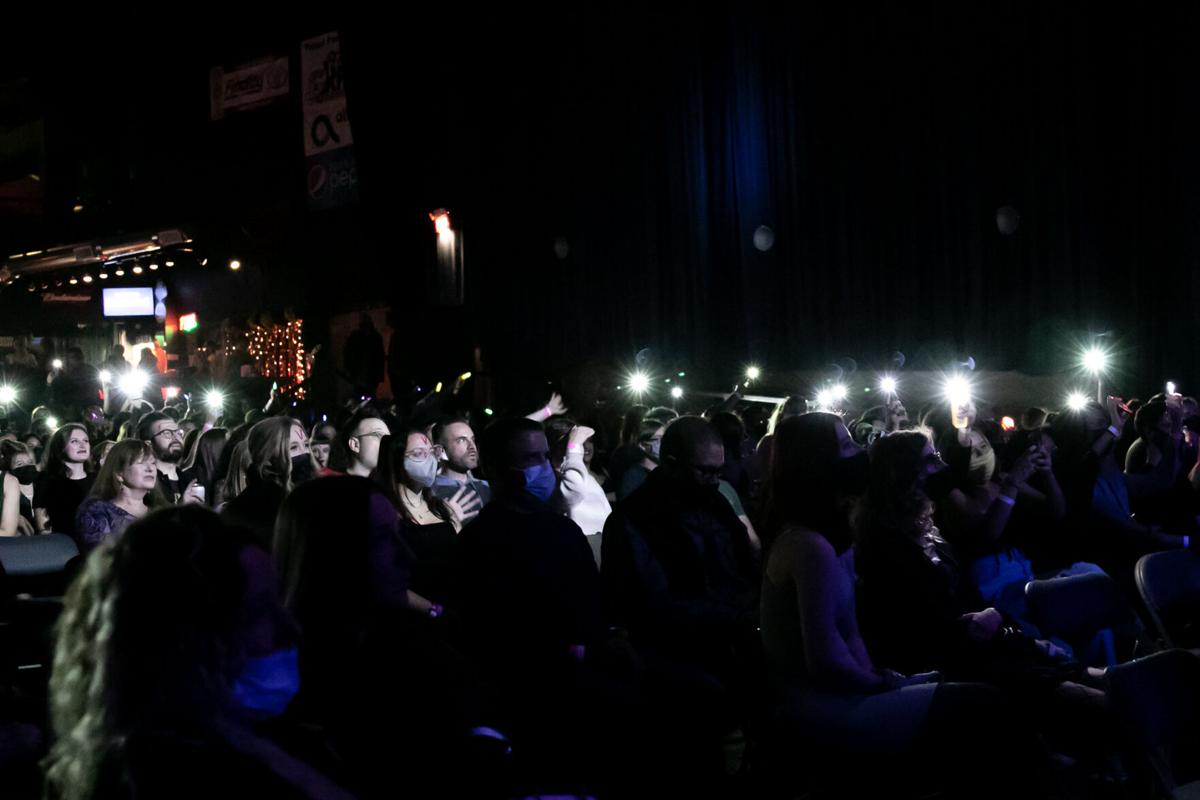 The Orpheum Theater was packed to the brim with people eager to watch the Rocky Horror Picture Show, Oct. 22. 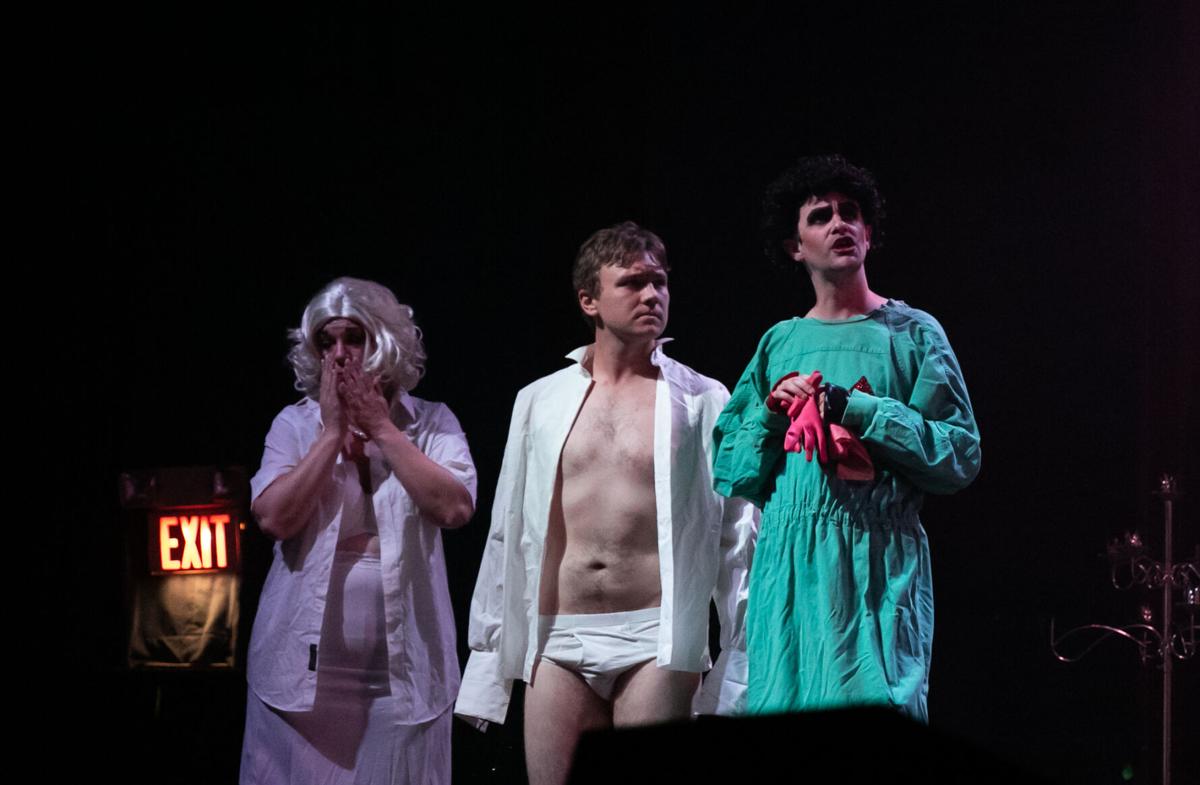 Members from the One Stage Family Theatre portraying their on-screen counterparts, Oct. 22. 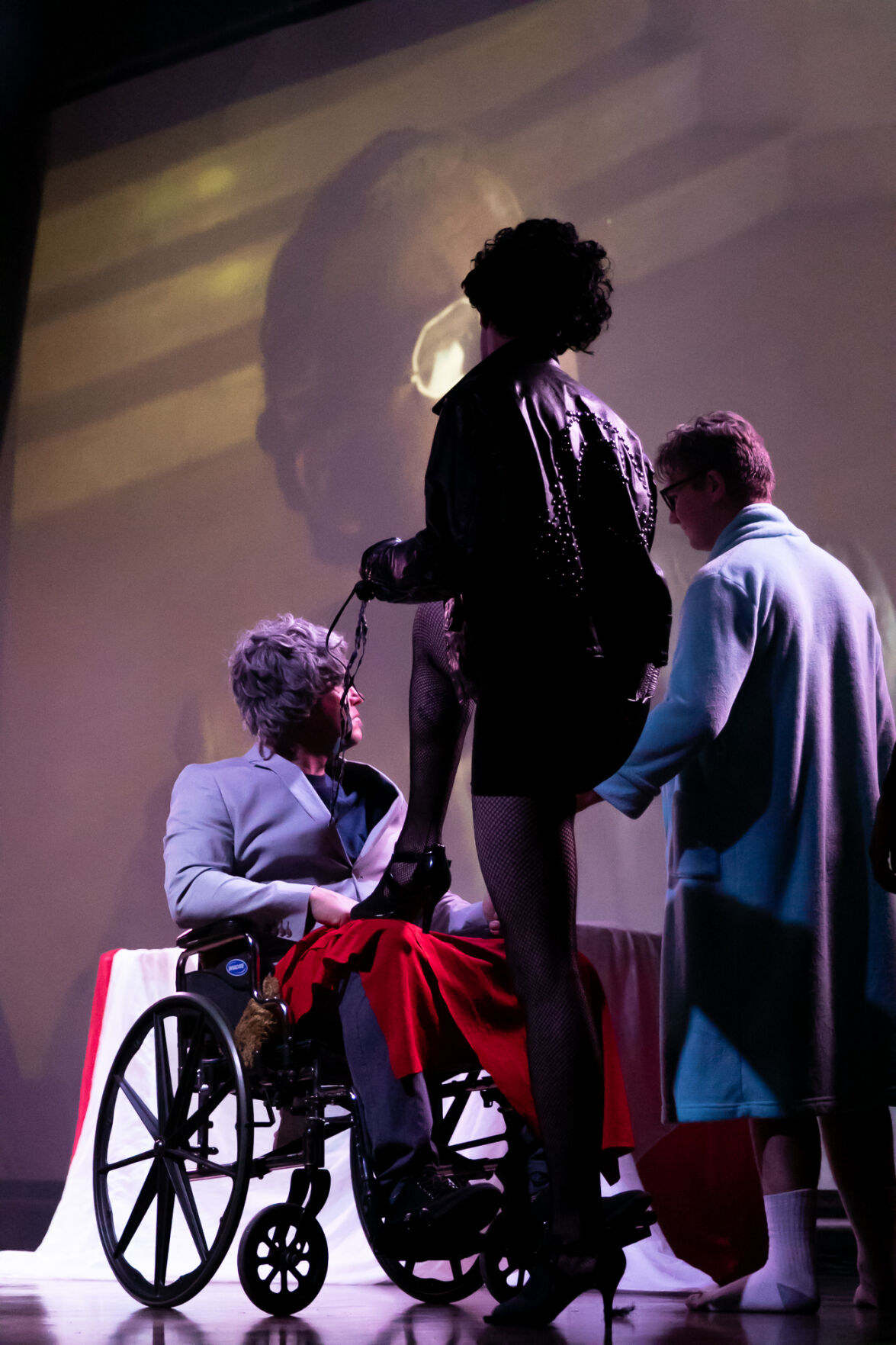 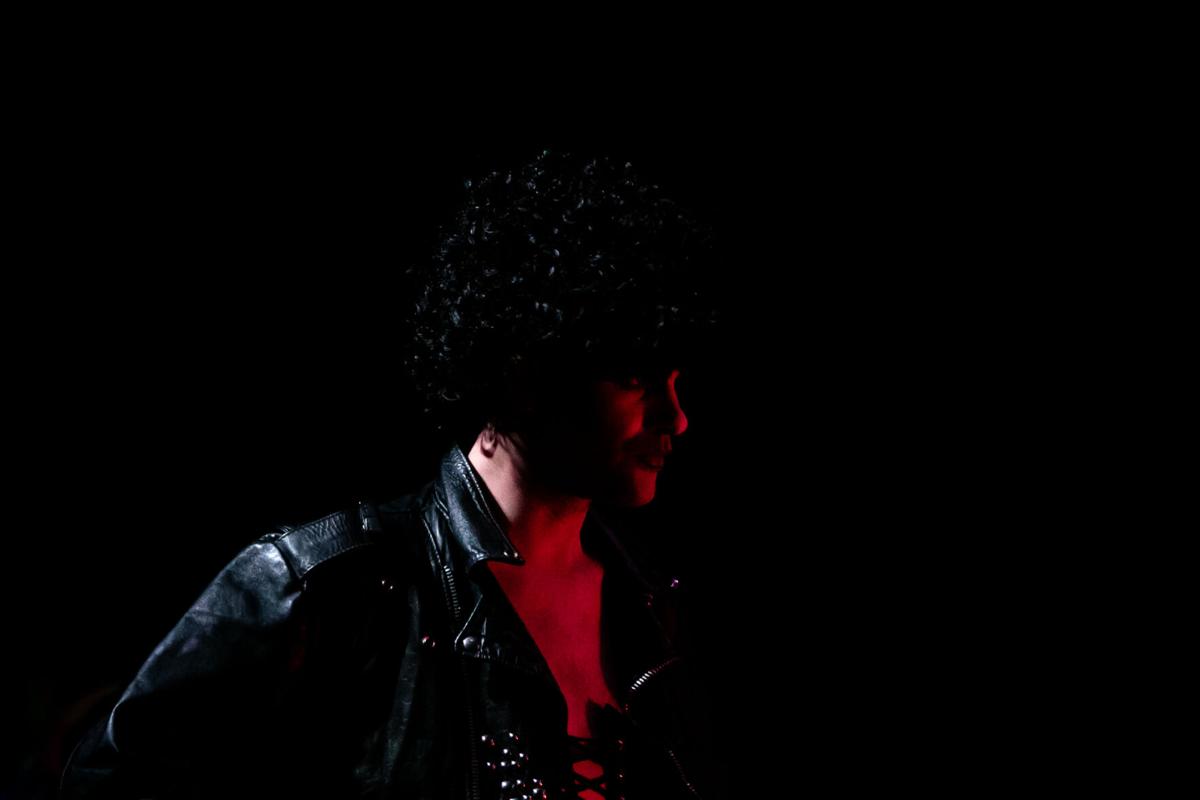 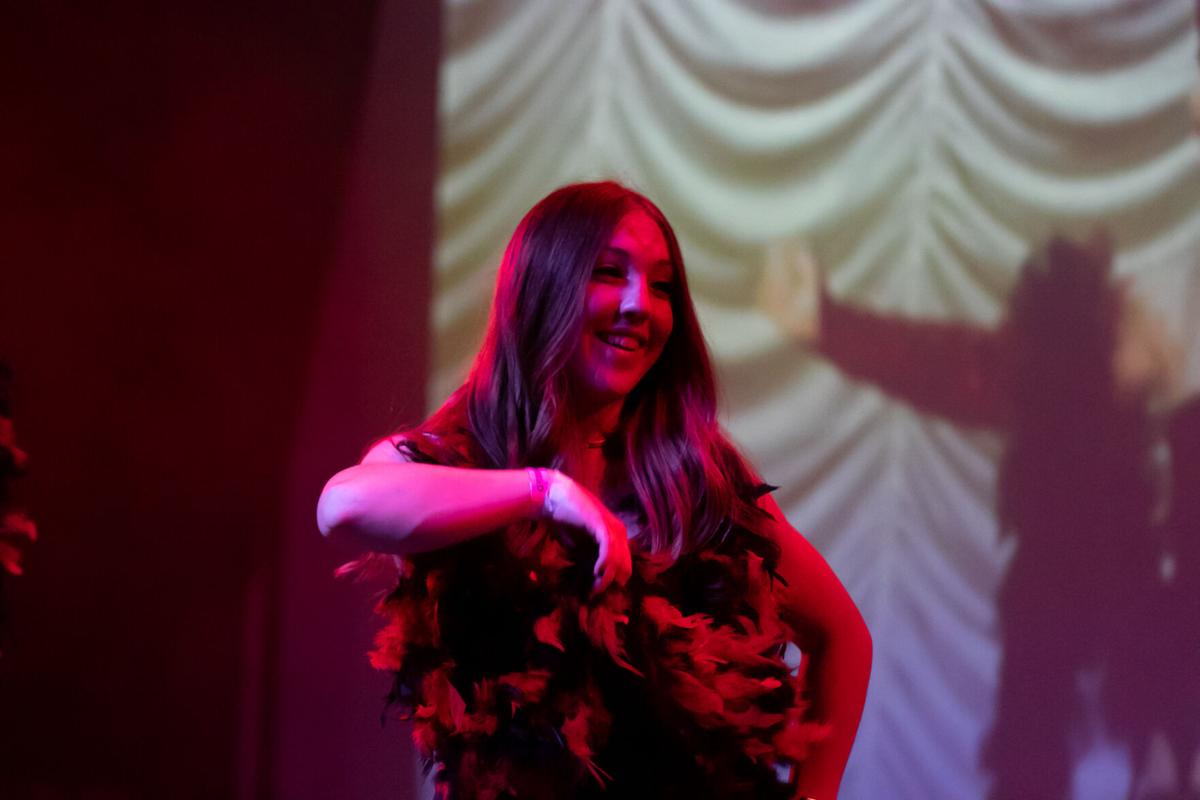 Katrina Cuevas, an audience member brought up to participate as ‘Rocky’ in the Rocky Horror Picture Show, Oct. 22. 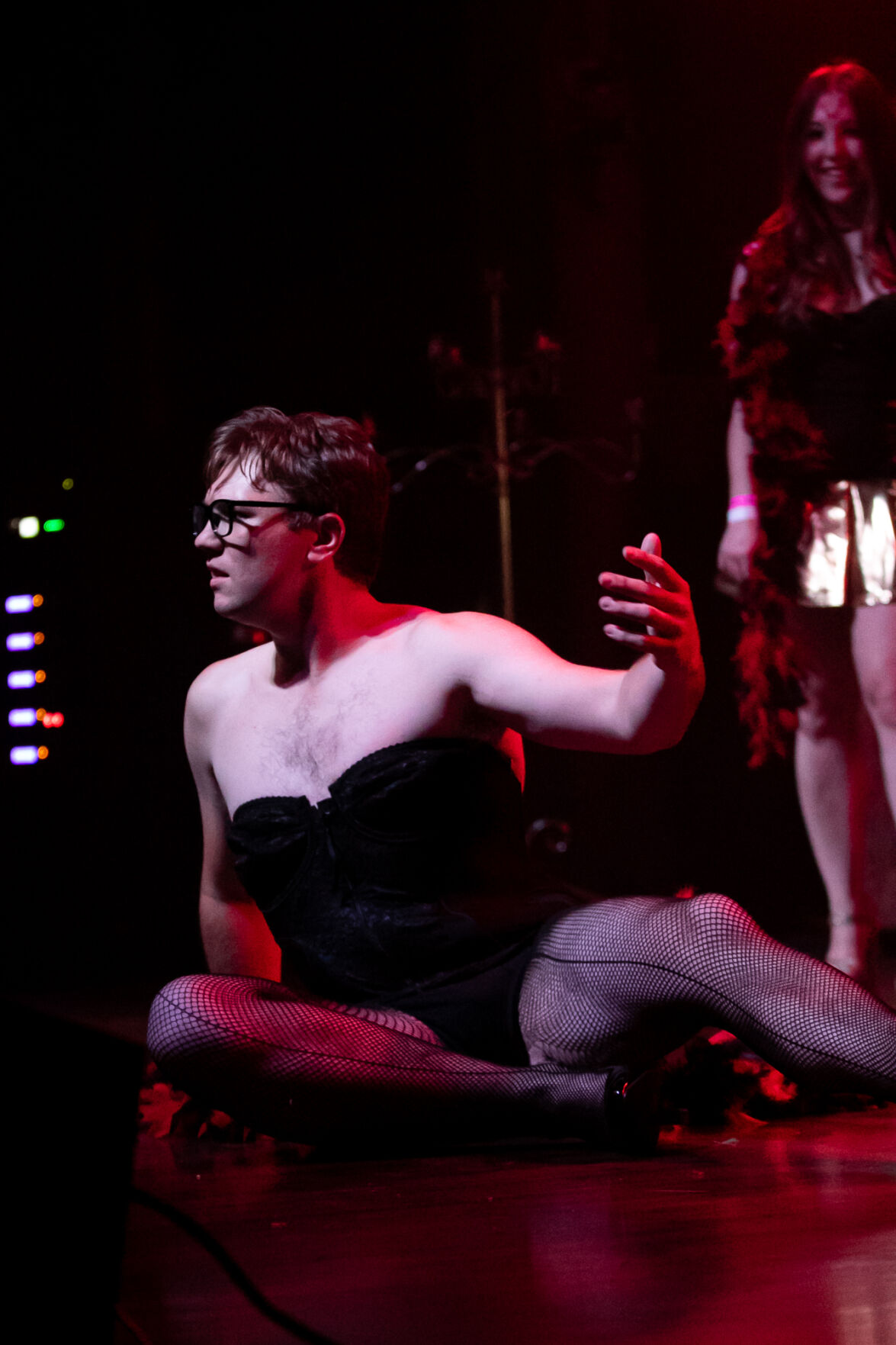 The Orpheum Theater was packed to the brim with people eager to watch the Rocky Horror Picture Show, Oct. 22.

Members from the One Stage Family Theatre portraying their on-screen counterparts, Oct. 22.

Katrina Cuevas, an audience member brought up to participate as ‘Rocky’ in the Rocky Horror Picture Show, Oct. 22.

Orpheum Theater hosted the One Stage Family Theatre company as it performed the iconic cult classic, “The Rocky Horror Picture Show,” on Oct. 22. Attending a live performance of Rocky Horror is nothing less than an experience.

To start, audience members were marked with a red lipstick drawn “V” from staff members if they identified themselves as “Rocky Horror virgins” — those who have never seen the show before. A typical Rocky Horror audience also consists of an eclectic blend of costumes relating to the show. Some passionate attendees go all out and dress in head-to-toe replication of iconic film characters such as Dr. Frank N. Furter, Brad Majors, Janet Weiss, Magenta, Columbia and of course, Rocky Horror. The Flagstaff audience that sold out the Orpheum lived up to its predecessors’ costume expectations.

A cast member began the show by addressing the audience in search of anyone who had dressed up as Rocky Horror. They pulled three contestants on stage, each vying for the evening’s title of “Best Rocky Horror.” The winner, chosen by audience approval, was pulled backstage for a “special prize.”

As the lights dimmed, the crowd filled with excitement and anticipation. Those unfamiliar with a live production of Rocky Horror had to get used to the atmosphere quickly, as it is unlike any other. A typical performance involves the original 1975 film playing on screen just behind the stage, while cast members perform the show simultaneously, live on stage. It is also customary for the audience to shout varying responses based on what is happening in the show. For example, whenever anyone says “Brad” or “Janet” — two of the main characters — it is met with yells of “as***le” in reference to Brad, or “s**t” directed at Janet. These traditions tend to result in a boisterous crowd, and those in attendance at the Orpheum were no different.

During one of the first scenes, Brad and Janet are driving through a storm. The cast and staff members producing the show went to great lengths to ensure audience members truly felt like they were stuck in the storm with the couple. The lighting crew created flashes of light synonymous with the lightning in the film, and staff members used spray bottles to pelt nearby audience members with water droplets to mimic the rain.

Nearly every song within the Rocky Horror performance was accompanied by singing from those in the audience who were familiar with the show. However, one song made the crowd truly come alive: The quintessential “Time Warp.” The attendees jumped out of their seats to dance the time warp with cast members.

Sophomores Lindsey Thornton and Kristen Carver said the time warp scene and dance was, by far, their favorite part of the show. The pair made a last-minute decision to attend, having never experienced Rocky Horror before.

“We came into this totally blind and super excited,” Thornton said. “One of our friends said she was coming, and we were just very spontaneous about it. We decided yesterday.”

Carver said she and Thornton did not necessarily know what to expect, having never seen the show before, but were excited nonetheless.

“I think we both walked into this really open-minded and ready to have fun,” Carver said.

Shana Lujan, who played Janet, explained the cast often has as much fun as the audience while performing. They love when the crowd plays along with them and enjoys the show overall, Lujan said.

While the majority of cast members have been part of the Rocky Horror performance for years, Lujan said it is still a lot of work to prepare for such a multi-faceted show. Each performer has seen the Rocky Horror film numerous times, Lujan explained, in order to portray everything perfectly.

“It’s so different from any other show that we do,” Sturdevant-Moylan said. “It’s kind of a show where, especially us adults who work with the theater company, we can just let loose, be fun and free without having to worry about the kids watching us.”

The show ended with a standing ovation from the entire audience as cast members filed back on stage for a collective bow. From beginning to end, “The Rocky Horror Picture Show” had an energetic cast and crowd. Still in high spirits, the audience poured out of the Orpheum — many remaining just outside the theater, chatting excitedly about the performance they had just experienced.

Thornton said, overall, the show exceeded her expectations. She and Carver said they will definitely be making Rocky Horror an October tradition for years to come.