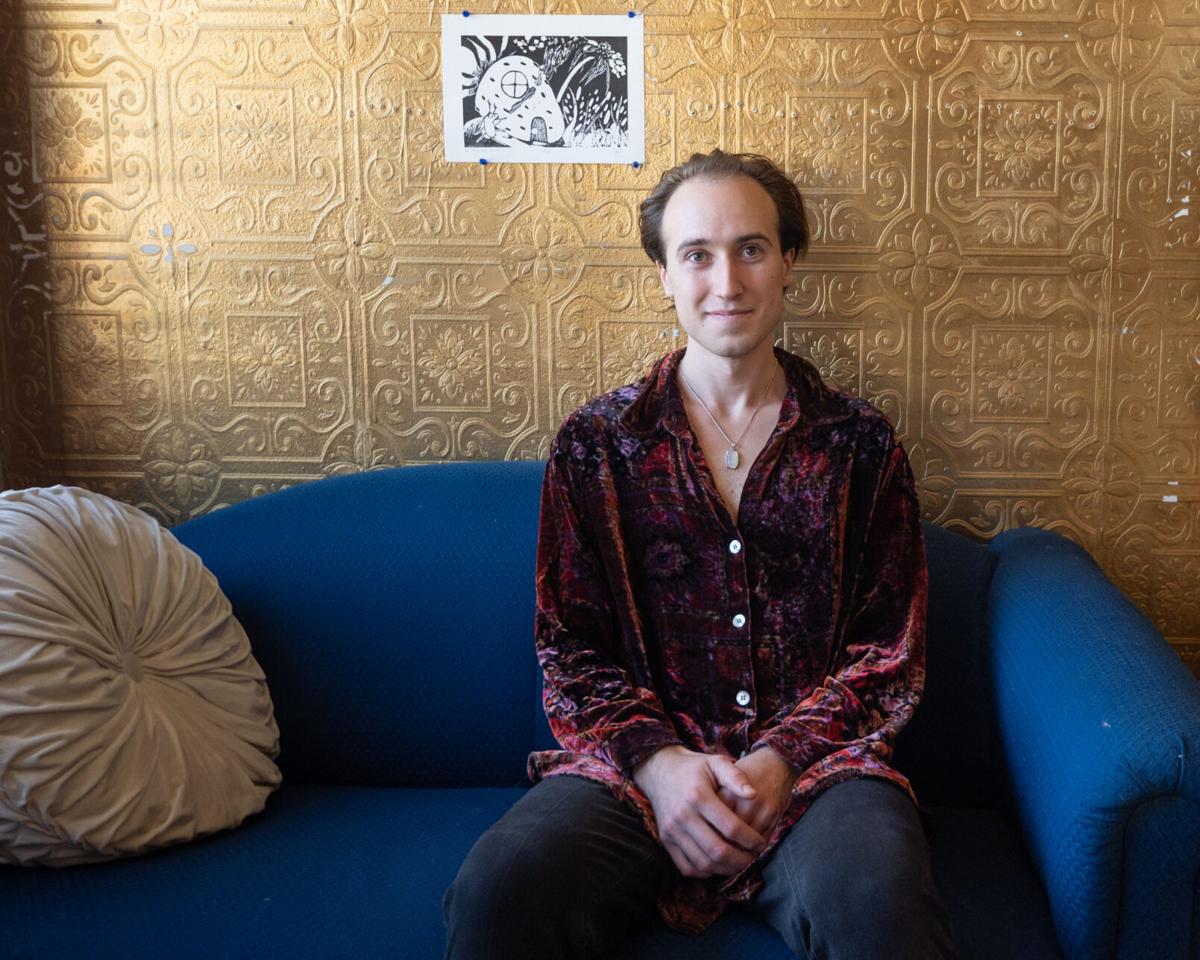 Christopher Alagna, co-founder and co-director of Liminal sits for a portrait in a study space, Oct. 22. 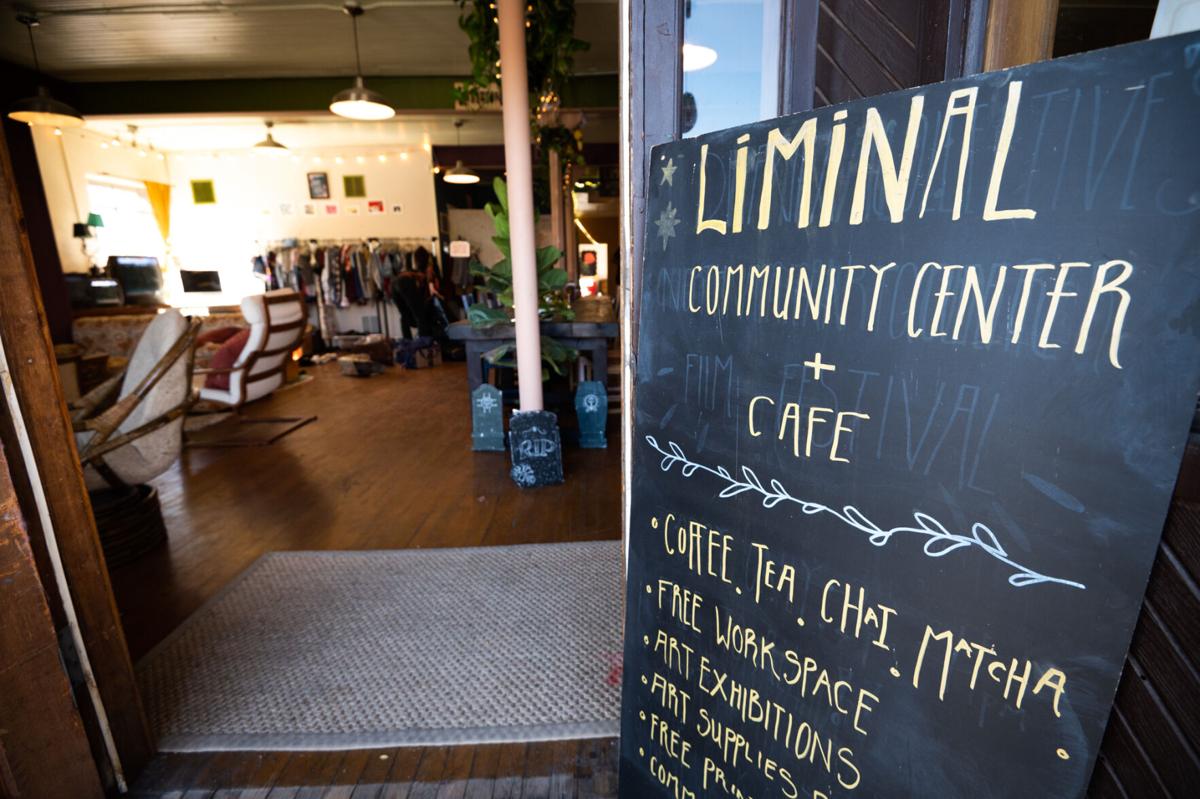 Liminal is a volunteer-run organization where customers are encouraged to pay what they can for drinks and food, Oct. 22. 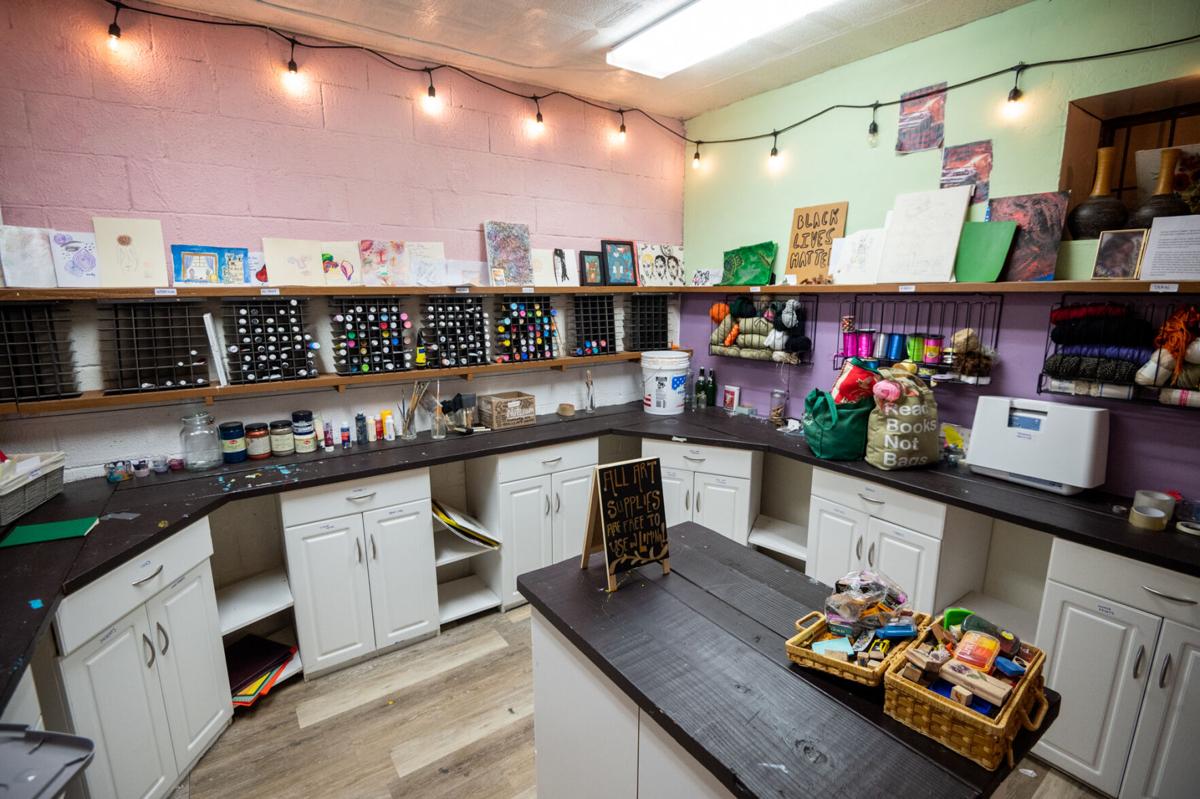 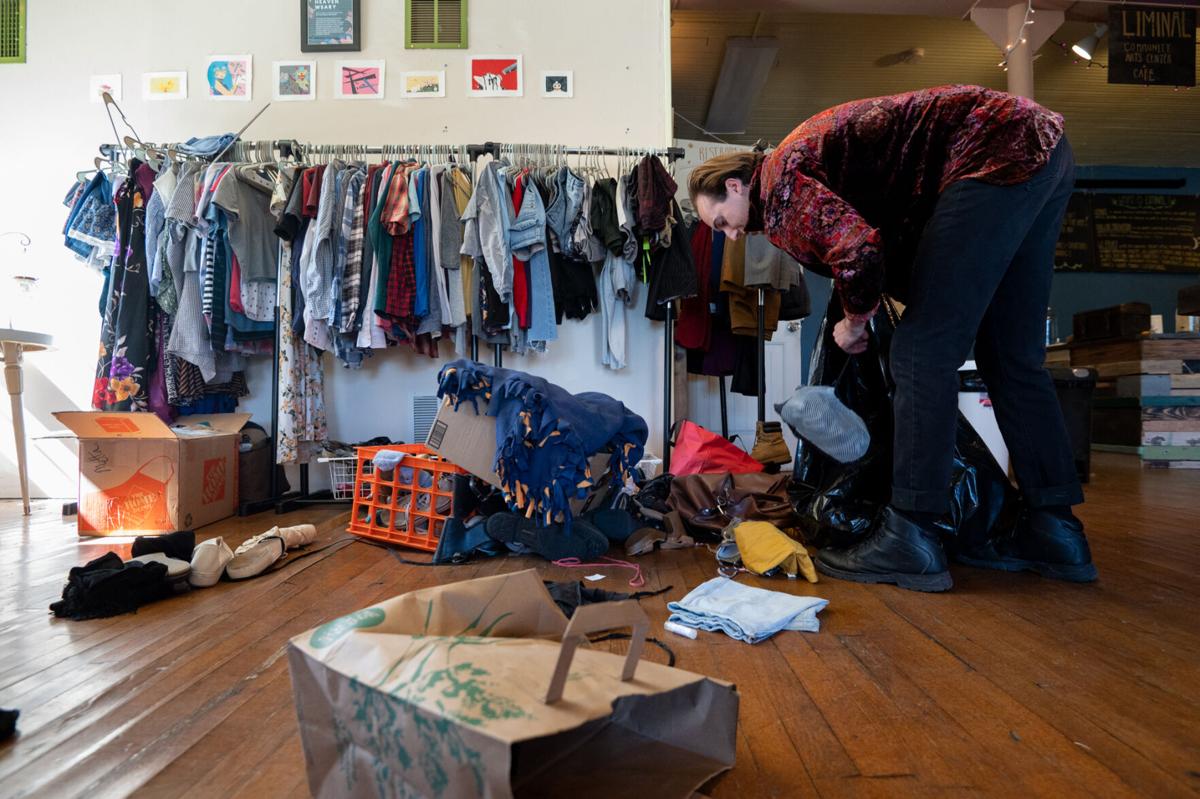 Christopher Alagna organizes donated clothes at the clothing exchange space in the cafe, Oct. 22. Guests are encouraged to leave an article of clothing when they take one with them. 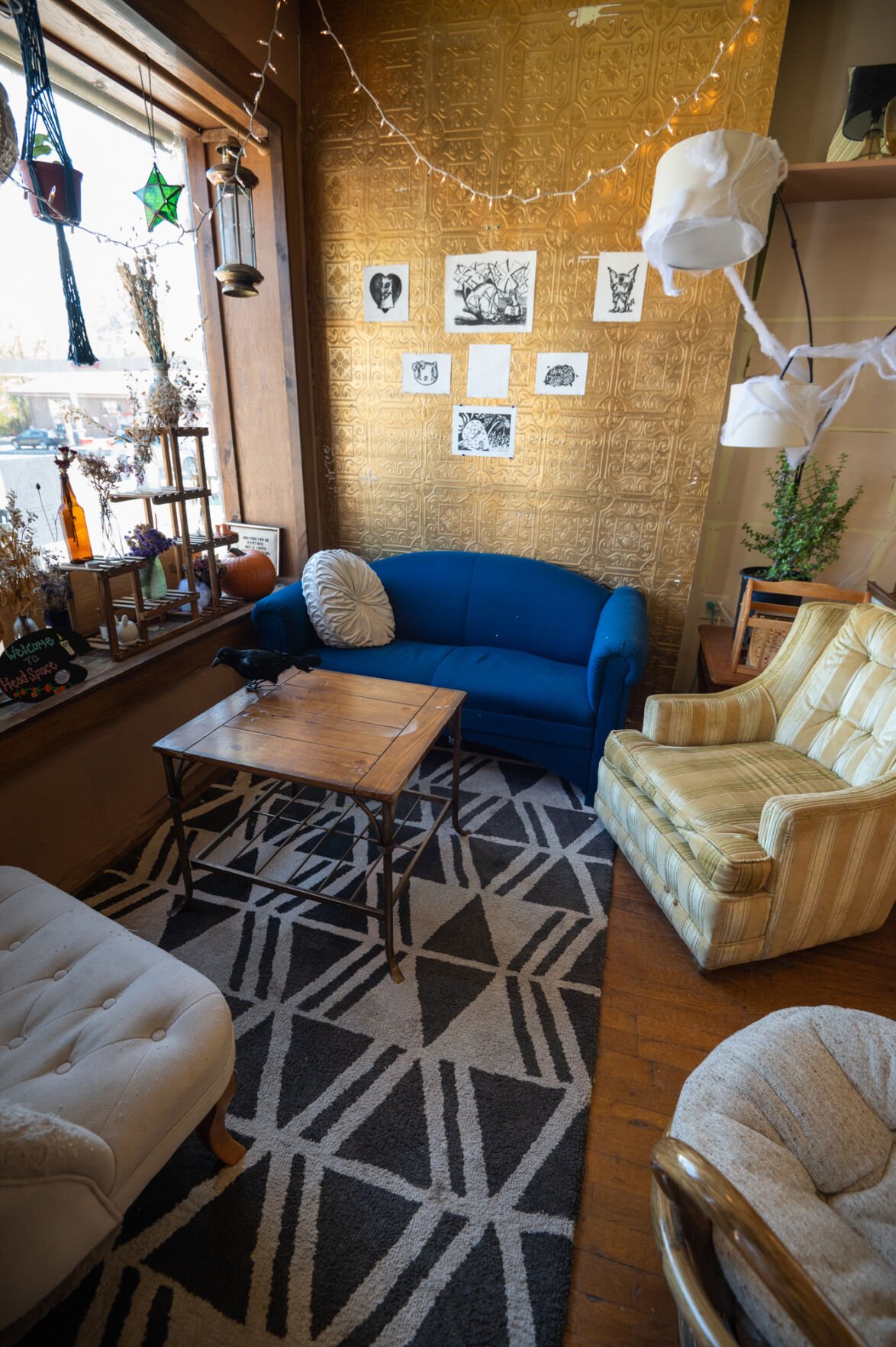 A study space at Liminal Community Center and Cafe, Oct. 22. 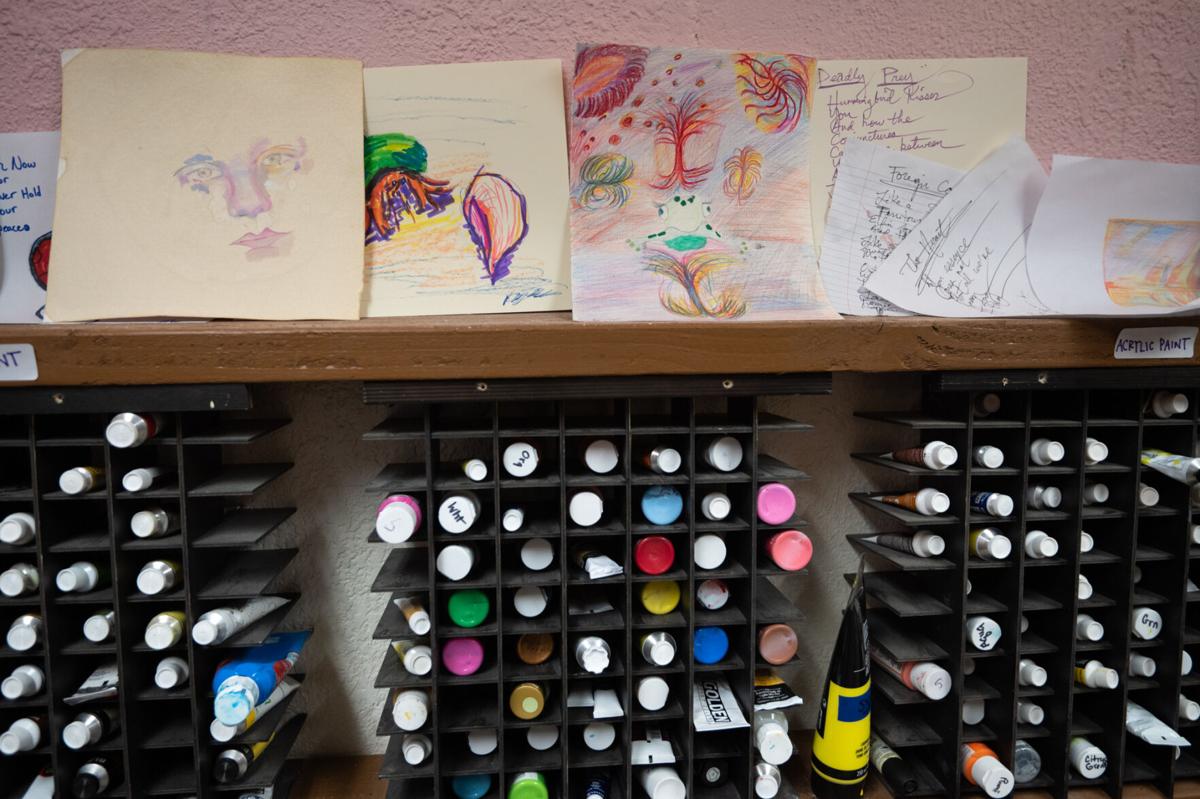 Christopher Alagna, co-founder and co-director of Liminal sits for a portrait in a study space, Oct. 22.

Liminal is a volunteer-run organization where customers are encouraged to pay what they can for drinks and food, Oct. 22.

Christopher Alagna organizes donated clothes at the clothing exchange space in the cafe, Oct. 22. Guests are encouraged to leave an article of clothing when they take one with them.

A study space at Liminal Community Center and Cafe, Oct. 22.

Walking into Liminal, a nonprofit community arts and education center, one is greeted by warm-toned lights and plenty of comfortable seating. In the early afternoon, individuals can be seen studying, conversing or drinking a beverage from the cafe. Liminal orchestrates events such as the Queer Goth Party or the Liminal Monster Mash.

Liminal was co-founded in April 2021 by Christopher Alagna and Ryan McElligott, who both attended NAU as queer studies majors. It is located at the corner of South San Francisco Street and East Butler Avenue, across from Awa Kava Bar. The space was created to maintain the founding principles for anyone who enters, which include treating all individuals with equal respect and opportunity.

McElligot mentioned the idea for creating this space flourished due to COVID-19.

“I had a lot of time during the pandemic to sit with these ideas and begin scheming with Christopher for how to breathe this concept into being,” McElligott said.

Alagna and McElligott are longtime friends who moved back to Flagstaff together after living in Montreal, Canada. McElligott said while living abroad, they took inspiration from grassroots organizations they became familiar with. After conceptualizing together, the pair decided to get the ball rolling.

“Liminal was firstly an abstract concept of what it would mean to radically develop the community in Flagstaff, before we at all considered what such a thing would look like in practice,”  Alagna said.

The community center was formed over six months ago, and the co-founders have transformed it into the space they once dreamt of. The area is free and offers many public resources, such as a pay-what-you-can cafe, free clothing, art supplies, stationery items, reading materials, a computer and printing station, a small classroom and an all-gender restroom.

Liminal offers these resources with the intention of providing materials and spaces to those in town who usually lack access to such opportunities. Donations and optional cafe purchases allow individuals of any economic status to enjoy Liminal.

Something the co-founders emphasized is the “pay-what-you-can” policy. To buy drinks, enter events or join other activities that usually cost money, they decided to implement a structure that does not force anyone to pay a specific amount. The phrase is exactly how it sounds: Individuals are never forced to pay for resources or entry to Liminal, which is only possible due to the volunteer system in place.

“Liminal is run by volunteers who want to contribute to the space,” Alagna said. “Not because they want to get paid, but because they genuinely believe in and feel comfortable in the space.”

“No one ought to profit off of the community,” Alagna said. “Working with the community should be about creating fun and healing bonds with one another, and about empathizing with and humanizing one another.”

Both co-founders described their experiences with unsheltered people as nothing but positive. Alagna said creating this space allowed volunteers to have realizations about houseless community members, including the lack of resources for this demographic.

Besides acting as a resource center, Liminal intends to offer a safe space for queer-identifying individuals.

“We’ve learned that queer people are really craving a fun safe space,” Alagna said. “We absolutely prioritize the inclusion of marginalized populations, and that includes the queer people of Flagstaff.”

The co-founders often host queer-friendly parties, community fundraisers, saftey trainings, community meetings and more, all with the intention of allowing individuals to feel comfortable and included in their space.

To both co-founders, who continue to learn as individuals and community members, the goals of Liminal are important. Overall, they said the hope is to continue promoting creativity and cultural understanding.

“Ideally, Liminal will become an arts and culture center for marginalized people and issues, which will inspire similar local projects,” Alagna said.

By providing resources and encouraging the public to use Liminal as a safe space, Alagna said they can imagine a room full of people enjoying coffee and community discussions. They want Liminal to foster a creative and inclusive space that empowers those who are underrepresented.

Whatever the future holds for Liminal, the community is optimistic that it will continue to provide comfort and support for everyone. For the sake of Flagstaff’s people, the co-founders of Liminal are an example of selflessness.