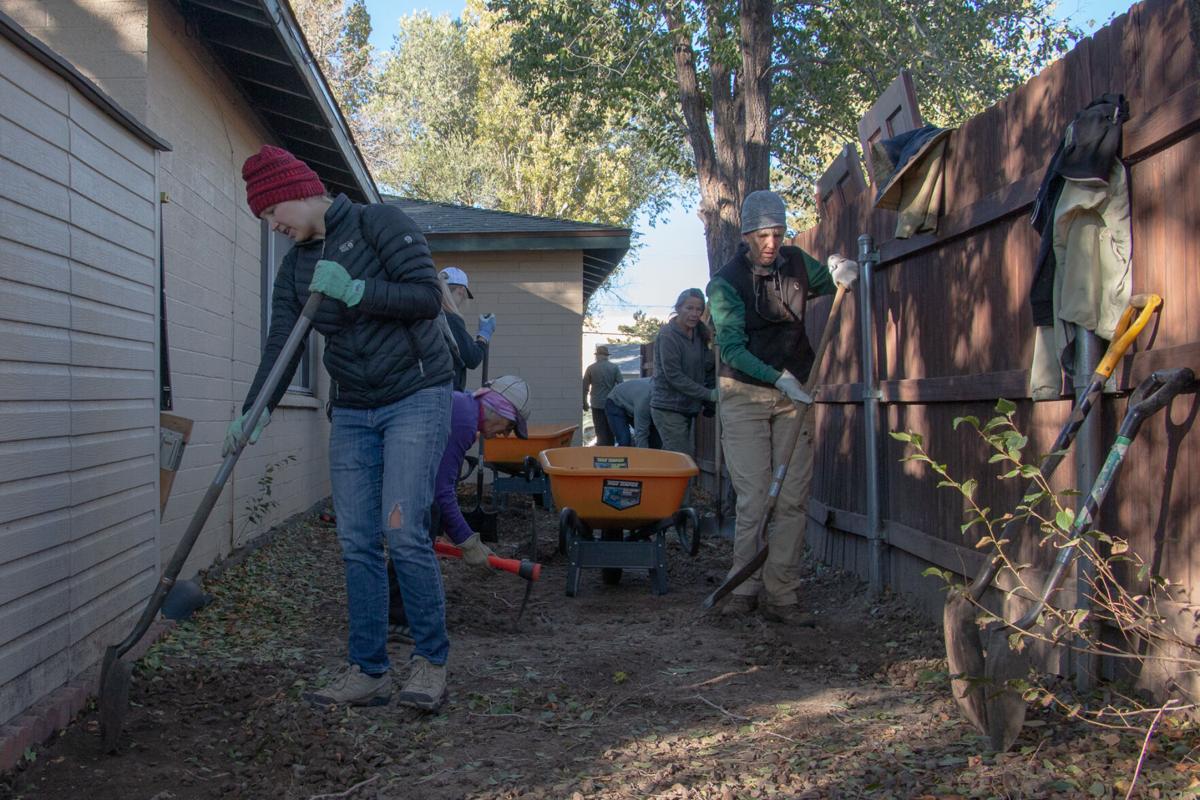 A group of volunteers cleans up the soot deposited in a yard from floodwaters using shovels, pickaxes and wheelbarrows, Oct. 16. 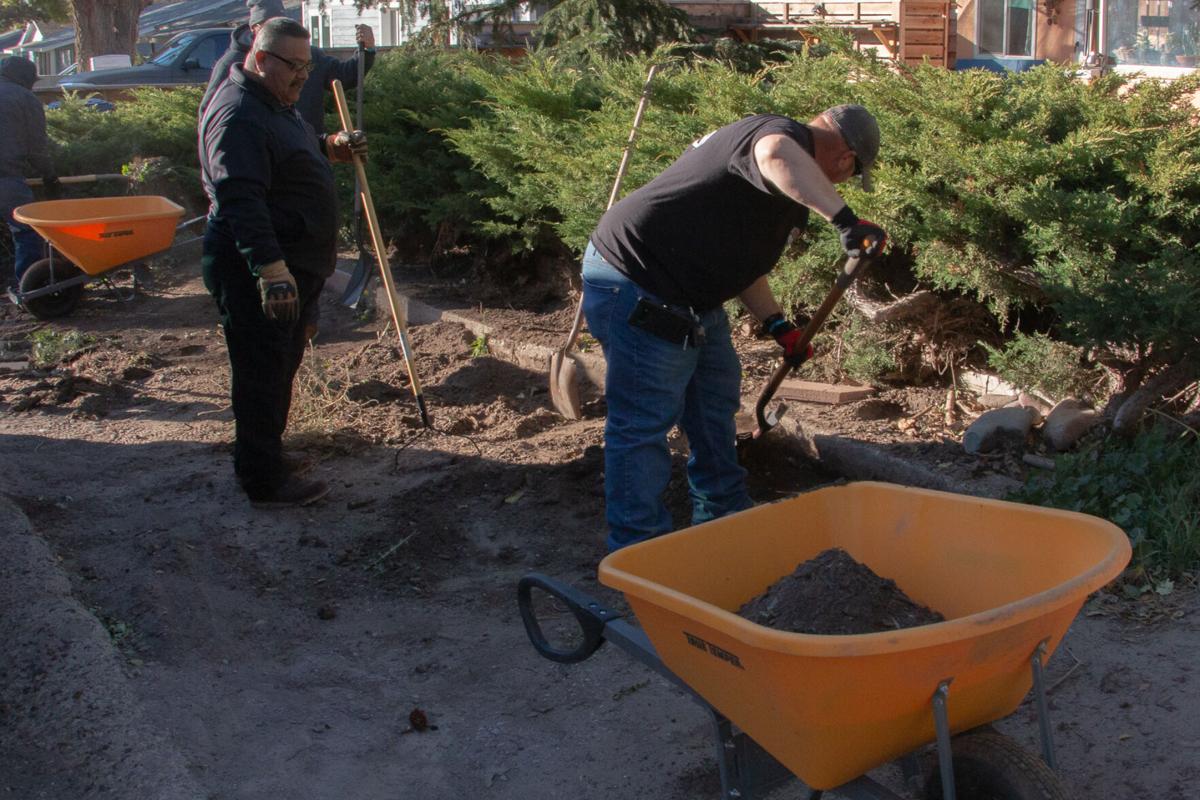 Traveling all the way from Phoenix, Hector Hernandez (left) and Dan Hanson (right) clear out soot left from monsoon flooding in front of a Sunnyside residence, Oct. 16. 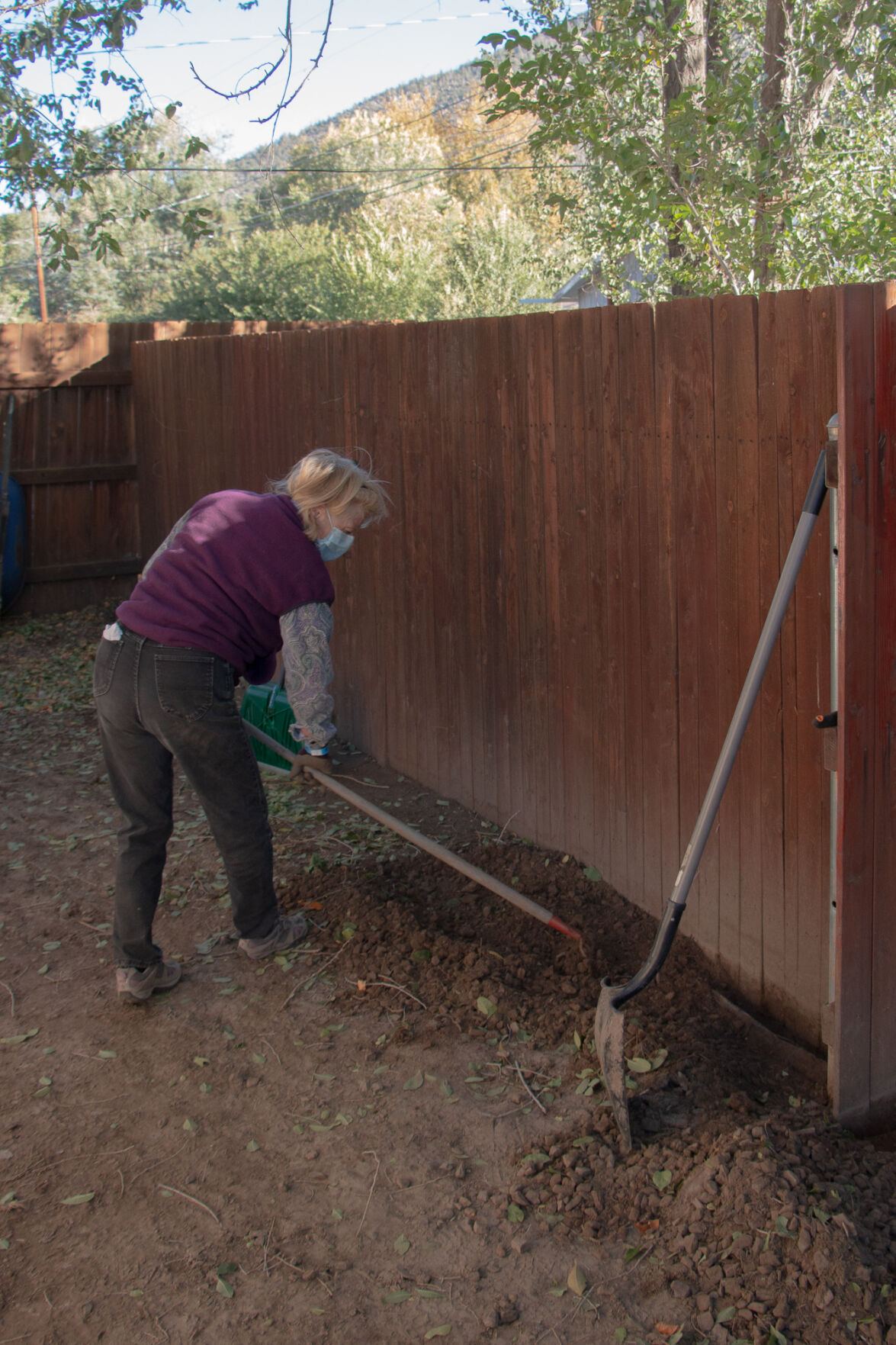 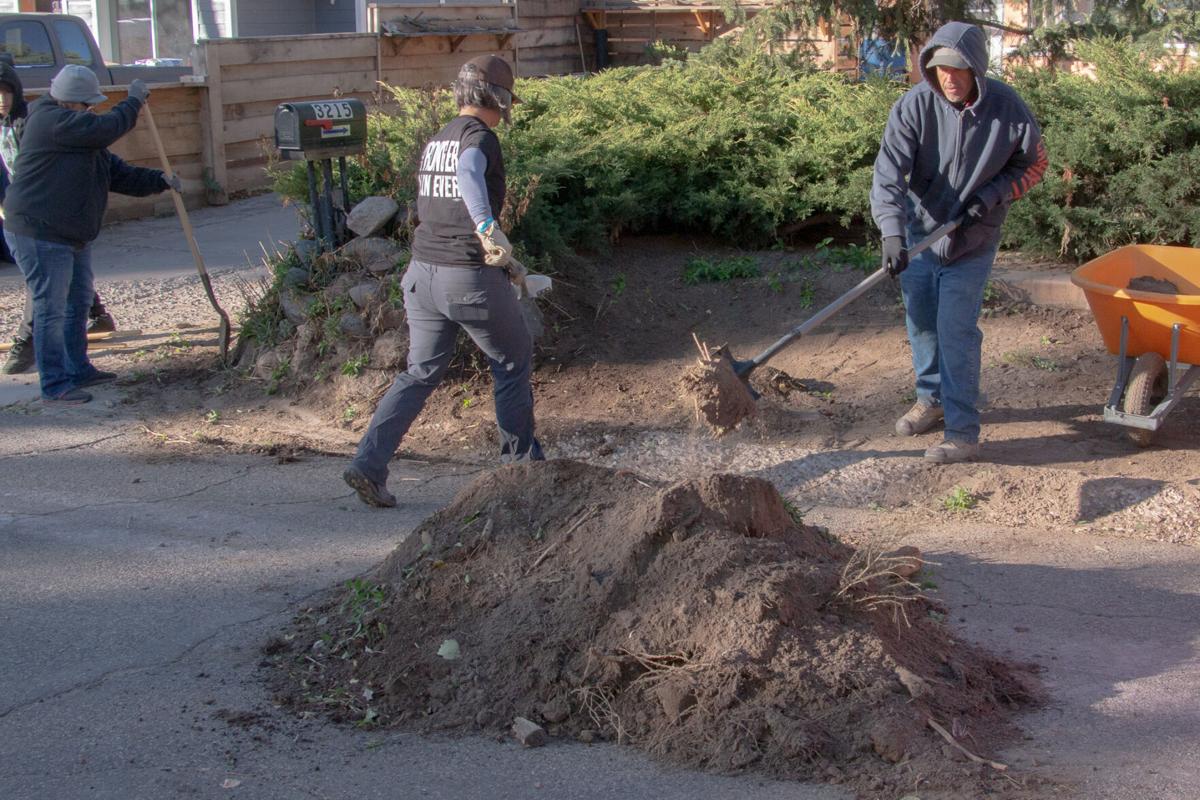 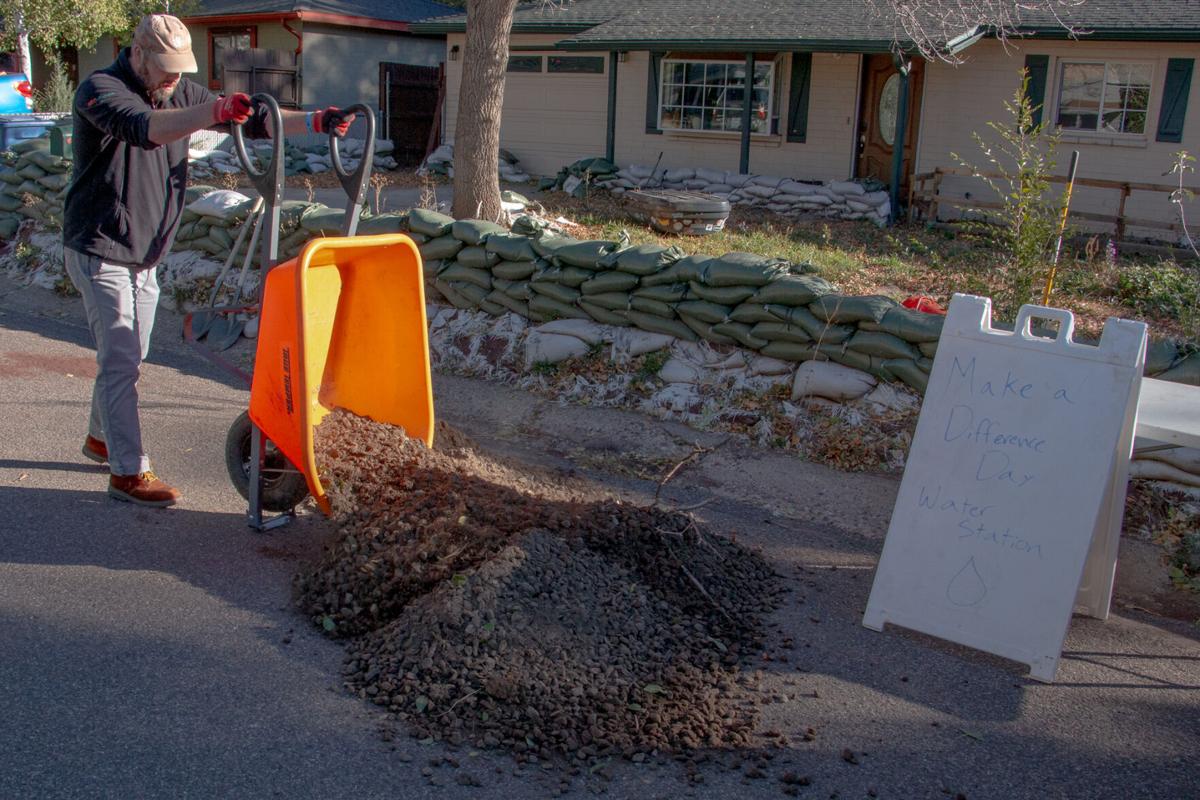 Volunteer Bill Stewart unloads another bucket full of soot and debris left from the monsoon flooding this past summer, Oct. 16. 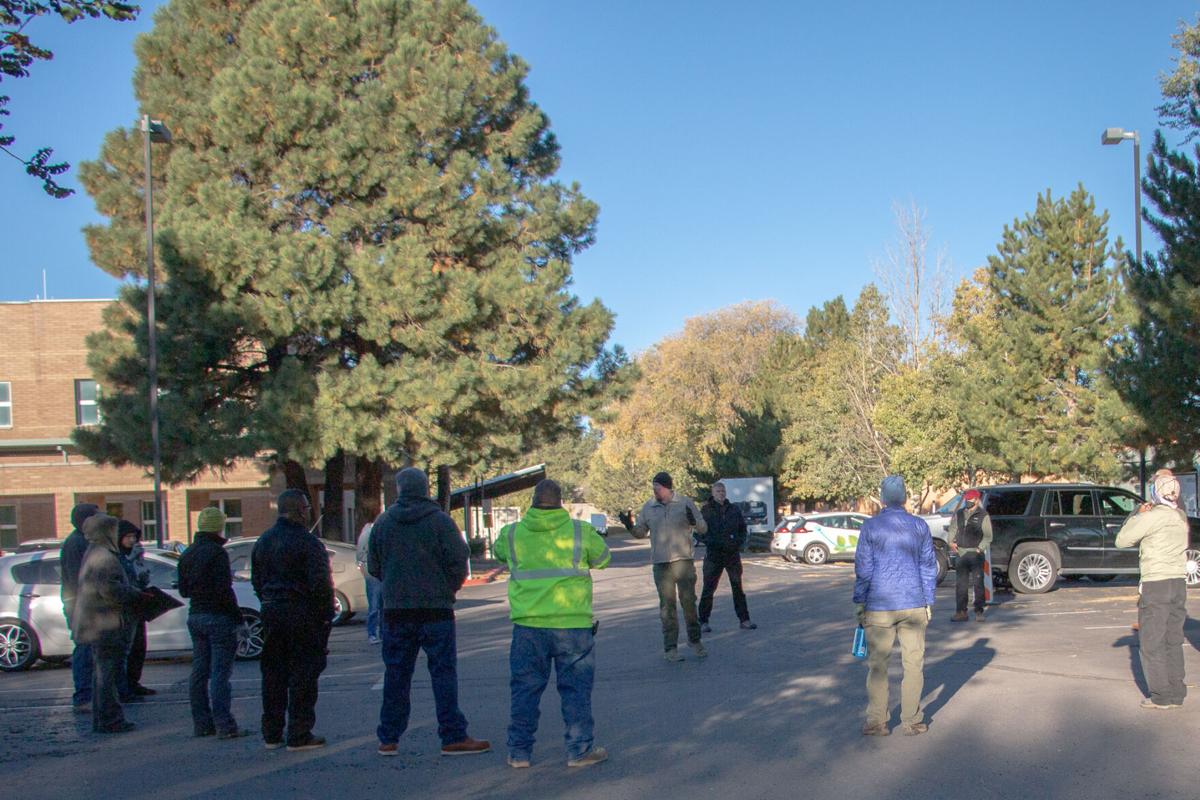 A group of volunteers cleans up the soot deposited in a yard from floodwaters using shovels, pickaxes and wheelbarrows, Oct. 16.

Traveling all the way from Phoenix, Hector Hernandez (left) and Dan Hanson (right) clear out soot left from monsoon flooding in front of a Sunnyside residence, Oct. 16.

Volunteer Bill Stewart unloads another bucket full of soot and debris left from the monsoon flooding this past summer, Oct. 16.

On Make A Difference Day 2021, which fell on Oct. 16, volunteers around Flagstaff joined one another to clean debris from the monsoon flooding this year. They worked from early morning to late afternoon.

Volunteers came together at 7:30 a.m. in 38-degree weather to work on cleaning up homes where flooding occurred. The neighborhood had sandbags lined up a couple feet in preparation for flooding events.

In 2019, the Museum Fire left an impact on the Flagstaff community that was strongly felt during last summer’s monsoons. The areas in which trees and root structures were gone made it so rainwater was carried down the mountain into residential sectors, flooding roads and houses along the way.

Efforts from the City of Flagstaff’s Sustainability Program have led to the city working together with United Way of Northern Arizona in attempts to clean up monsoon debris in affected areas.

Flagstaff Administrative Assistant Marissa Molloy explained Make A Difference Day has happened for over 15 years, longer than both her supervisor and Molloy have worked in their positions. In previous years, the day entailed volunteers working to create storm drains in the community watershed, along with cleaning the area.

“We run volunteer events all the time,” Molloy said. “Make a Difference Day and Earth Day are some of our larger events, but we host clean-up events year round.”

The sustainability office hosts summer events that focus on cleaning up litter swept away by weather and causing more problems for waterways. In the winter, to keep roads clear and safe, they clean up after it snows and remove debris.

Each of the events rely on volunteers to make a big difference in the workload. Molloy added to this importance by explaining post-flooding volunteer opportunities would lead to a good turnout.

“Our volunteers are awesome,” Molloy said. “They love to get outside and get their hands dirty.”

Some of the volunteers came from a group called the Southwest Carpenters, which volunteers around Arizona — and the greater Southwest Region — by constructing roads and commercial buildings. According to its website, the council has more than 57,000 members spread through six states.

Special  representative Hector Hernandez said as part of the community, these carpenters believe in helping those around them. The group has visited Flagstaff twice this year.

“Our responsibility is to help,” Hernandez said. “It doesn’t matter where you live; if you need help, we are there.”

Sam Beckett, public works liaison to emergency management for Coconino County, gave a briefing on the event and explained their hope that because monsoon weather is over, their work will not be washed away. When water comes down the burn scar, Beckett said it collects dirt and debris along the way, increasing its volume until flooding stops.

“We will hopefully be prepared for next year’s monsoons,” Beckett said.

Beckett said he has helped those within parts of Flagstaff affected by the Museum Fire, specifically following the burn scar that led to severe flooding. He put sandbags in front of homes to stop flood waters from reaching the structures, in addition to removing debris.

Saturday’s volunteer efforts took many tools, including shovels, rakes, wheelbarrows and pickaxes. The participants gathered at the two homes and began their day, although the sediment on the ground was a few inches thick. After several hours of digging and diligence, one could finally hear the tools hitting concrete.

Volunteer Mimi Murov said she noticed the damage caused by flooding and wanted to get out and help.

Murov also explained she has seen the effects of the water, which sometimes floods higher than the sandbag walls. Murov and her friend got to the event ready to do a full day’s work in helping the residents of Flagstaff who were hit and left with inches of debris in their homes.

“I hope it’s a productive day, and [that] whoever’s house we work at is happy with how it goes,” Murov said.

Though the Museum Fire happened two summers ago, in 2019, Molloy explained that the office of sustainability will continue to work closely to address future complications through resilience efforts.

Volunteers worked on backyards and front gardens, using wheelbarrows to continuously dump debris onto the road for eventual removal via city equipment. Residents who had their homes worked on expressed their gratitude. Make A Difference Day showcased the significance of volunteers proving their commitment to the community following the Museum Fire and flooding.