Skip to main content
You are the owner of this article.
Edit Article Add New Article
You have permission to edit this article.
Edit
Home
News
Opinion
Features
Culture
Sports
Multimedia
Gallery
PRINT EDITION
LJ in the UK
Search
1 of 10 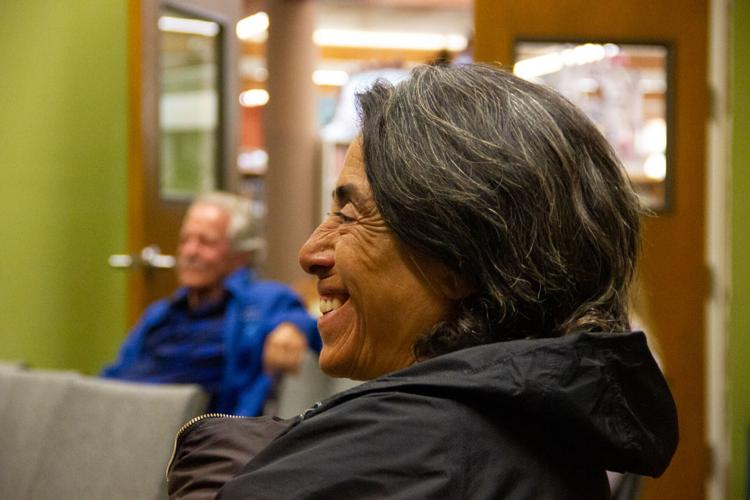 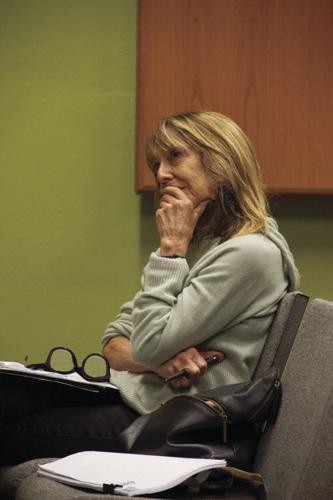 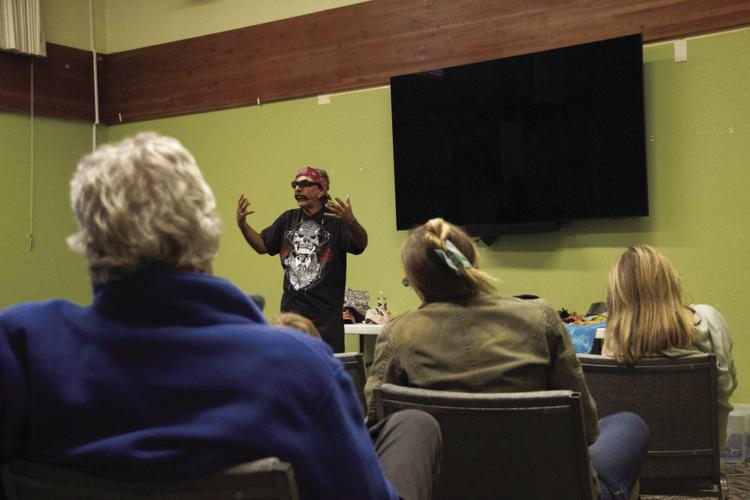 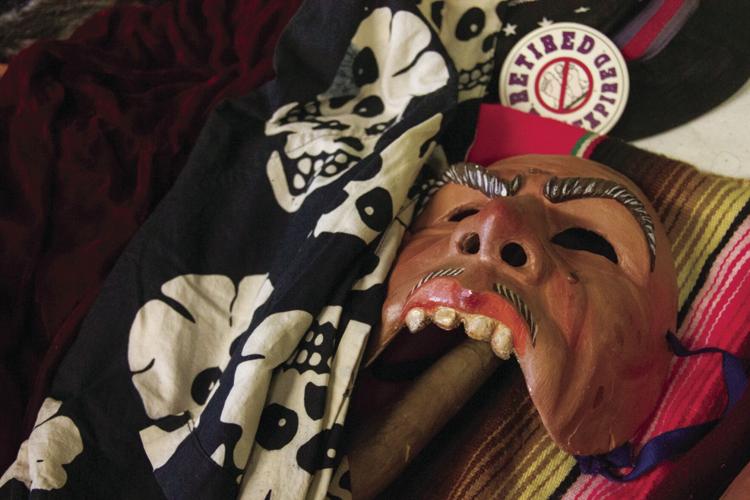 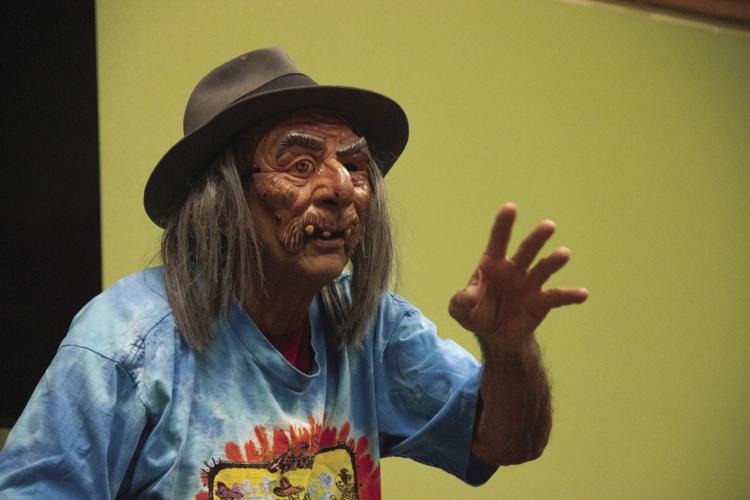 One of the characters Zarco Guerrero dresses as during his storytelling event in the Jan Romero Stevens Community Room at the Coconino County Public Library, is El Viejo, Oct. 17. 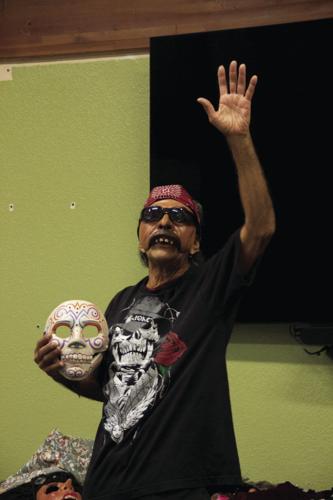 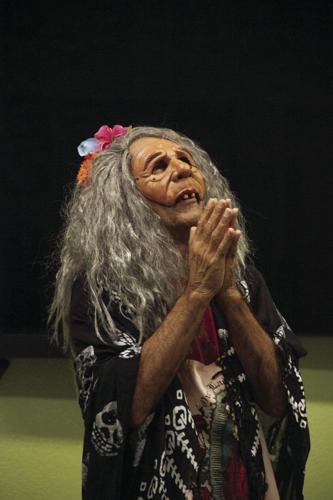 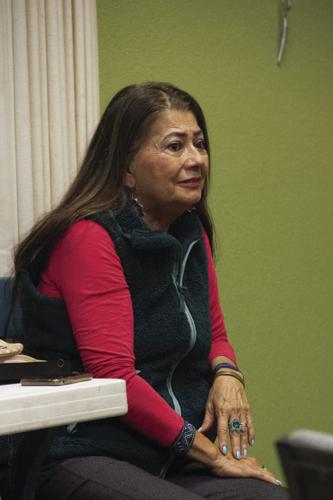 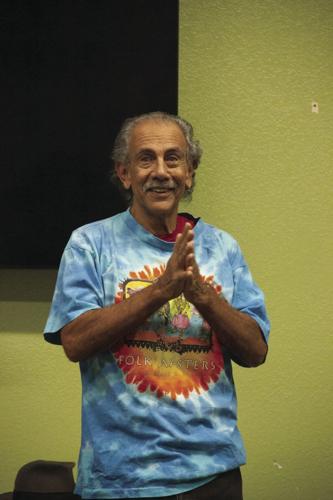 Zarco Guerrero answers questions and listens to comments after the end of his storytelling event in the Jan Romero Stevens Community Room at the Coconino County Public Library, Oct. 17. 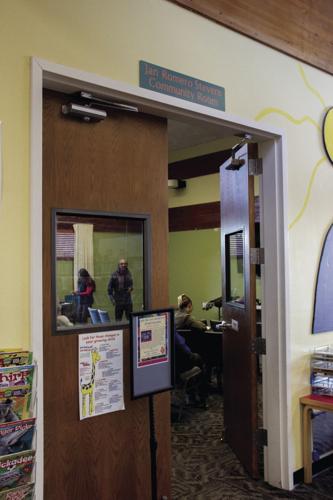 In the Jan Romero Stevens Community Room at the Coconino County Public Library, Zarco Guerrero holds a Día de Los Muertos storytelling event, Oct. 17. Guerrero explains the traditional Mexican holiday with a variety of characters and music to express the humor and sadness of our lives.

One of the characters Zarco Guerrero dresses as during his storytelling event in the Jan Romero Stevens Community Room at the Coconino County Public Library, is El Viejo, Oct. 17.

Zarco Guerrero answers questions and listens to comments after the end of his storytelling event in the Jan Romero Stevens Community Room at the Coconino County Public Library, Oct. 17.

In the Jan Romero Stevens Community Room at the Coconino County Public Library, Zarco Guerrero holds a Día de Los Muertos storytelling event, Oct. 17. Guerrero explains the traditional Mexican holiday with a variety of characters and music to express the humor and sadness of our lives.

Poet and sculptor Zarco Guerrero recently held an interactive storytelling session at Flagstaff Public Library. The event, which took place on Monday, Oct. 17, involved a performance from Guerrero in which he wore handmade masks and different costumes to convey a variety of characters.

Each character had a different look and different traits and taught audience members something about the Day of the Dead, or Día de los Muertos.

The event was held in the library’s Jan Romero Stevens Community Room, where seats were set up for the audience in front of a table upon which the costumes and masks could be seen.

The types of masks used by Guerrero were not ordinary, but rather a specific style he calls the invisible mask.

“I call it invisible because it disappears on my face,” Guerrero said. “And in doing so, I’m free to become the character of the mask, I don’t have the burden of being me, I have the pleasure of becoming the character.”

The inspiration behind the use of masks initially came to Guerrero after viewing ancient artwork at a museum and was later reaffirmed after seeing street performers in Mexico use masks as part of their act.

“I loved it because they brought the masks to life,” Guerrero said. “And I couldn’t forget that because I was doing sculpture and painting, and at that point, it became boring and stale, it sat still, you know, it was motionless. So when I saw these people bring the masks to life, I wanted to start experimenting with masks myself.”

As people began to trickle into the community room and take their seats, Guerrero greeted them with a smile, while he finished setting up for the performance.

As well as members of the general public, Programming Librarian Mary Corcoran was in the audience for the performance. Her role at the library involves the organization of library events.

Corcoran explained the process of the organization that went into setting up this storytelling event.

“It is something that we’re doing through the sponsorship and help of AZ Humanities,” Corcoran said. “They’re a statewide organization about culture, arts, storytelling, all that kind of stuff.”

Guerrero’s performance was not like an ordinary lecture. He did not just speak to the audience about Día de los Muertos, but through the interpretation of each character, he offered a comedic and lighthearted lesson and even performed some poetry.

Each persona he took on offered a different perspective on the festival, such as the old lady who spoke about the traditional culinary practices, or the smoker who, upon reaching the end of his life, realized the importance of family.

These various characters, interpreted by Guerrero, were based on real people that he has encountered throughout his life. They were created by the artist to convey positive and deeper messages after he heard some of the negative lyrics within the music his son was listening to.

“You know, it was a lot of profanity, a lot of misogyny,” Guerrero explained. “I didn’t like it. So there had to be another message, and I wanted a positive message, so I started writing a bunch of monologues about healthy lifestyles, and positive choices, and so I created these characters to tell their stories.”

As well as positive messages that can be applied to people’s lives, the performance also offered audience members the chance to learn something new about Día de los Muertos and its history.

Something that Guerrero stressed during his performance was the ancient nature of the festivity, which people are often unaware of.

“They call it a Hispanic celebration,” Guerrero said. “It’s not! We didn’t get this from Spain, it preceded Spain by thousands of years. So words are important, because they have meaning, so I want to try to get the truth out, and I have fun doing it.”

Audience member Dolores Rodriguez, who is a regular attendee of library events, was very intrigued by these historical elements of Guerrero’s performance.

“I learned something new with the historical topics,” Rodriguez said. “I didn’t know that it had started over 3,000 years ago, and that was really interesting. I’m a historical buff and I love doing research, so stuff like that is going to spur me to dig up some more information next time I’m on the computer.”

When discussing the origins of Día de los Muertos, Guerrero also highlighted the fact that it is often mistakenly absorbed into the American culture of Halloween.

“It’s very important to me to tell this story,” Guerrero explained. “Especially now, because it’s spreading, it’s becoming more and more popular, so it’s becoming gentrified, it’s becoming commercialized, and people think of it as being a Mexican Halloween, which it ain’t!”

During the event, Guerrero conveyed the true meaning of Día de los Muertos, which is not about trauma or mourning, rather about remembering our loved ones who have passed and keeping them alive through memory.

This sense of love and togetherness is something that Rodriguez, who grew up in a household which celebrated this tradition, also said she believed was a key feature of the holiday which must not be overlooked.

“The ‘Calaca,’ the skulls that they make, a lot of people think it’s a death thing, a Halloween thing,” Rodriguez said. “But what it really is is a reminder, because the way they saw it is that you never really die as long as your loved ones remember you and keep you in their hearts by celebrating you with the altars.”

She said the bond with a passed loved one is never broken and the love never dies. It is not to remind of death or mourning, but to celebrate the relationship.

Guerrero managed to convey this lightheartedness and absence of fear through his performance, which treated the topics of death and spirits with humor and cheerfulness.

Corcoran also spoke about a variety of other seasonal events that Flagstaff City-Coconino County Public Library will be hosting in the period leading up to Halloween, including stories of the library itself being haunted.

Details regarding upcoming events can be found on the Library Calendar.