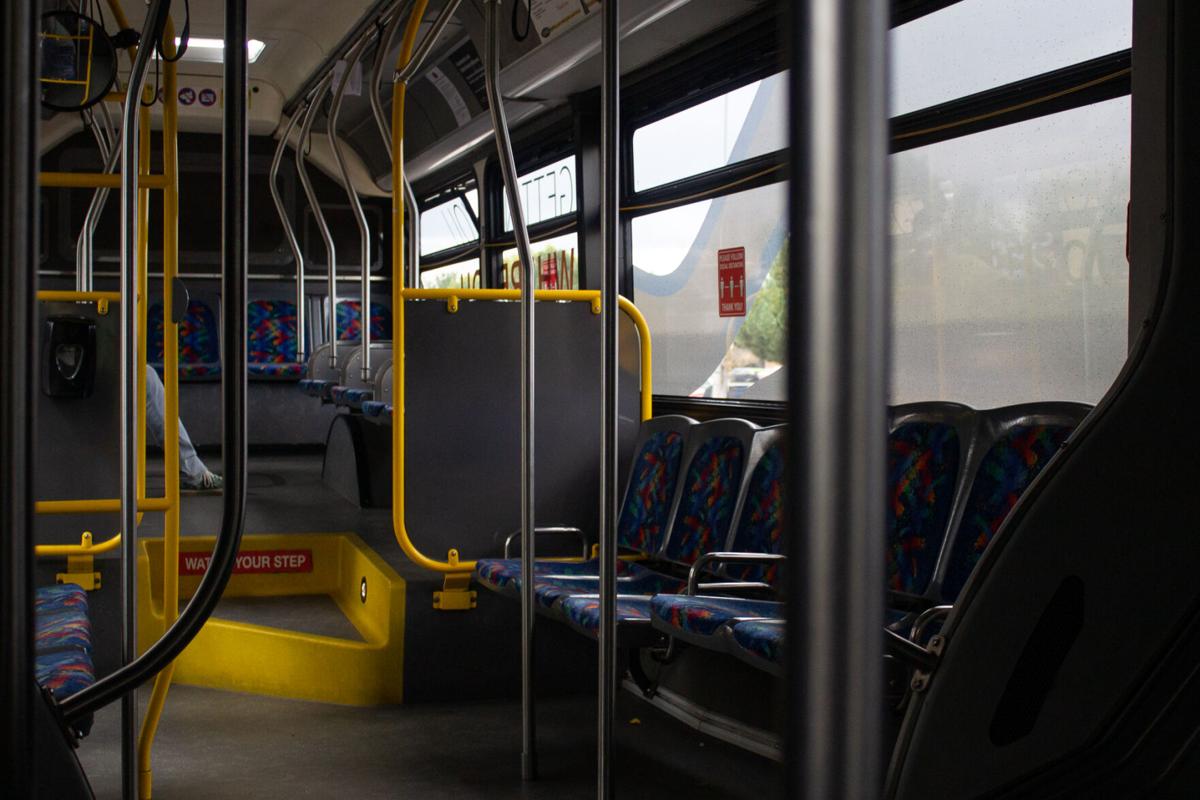 A Mountain Line bus sits empty as it is running its route through campus and around Flagstaff, Sept. 30. 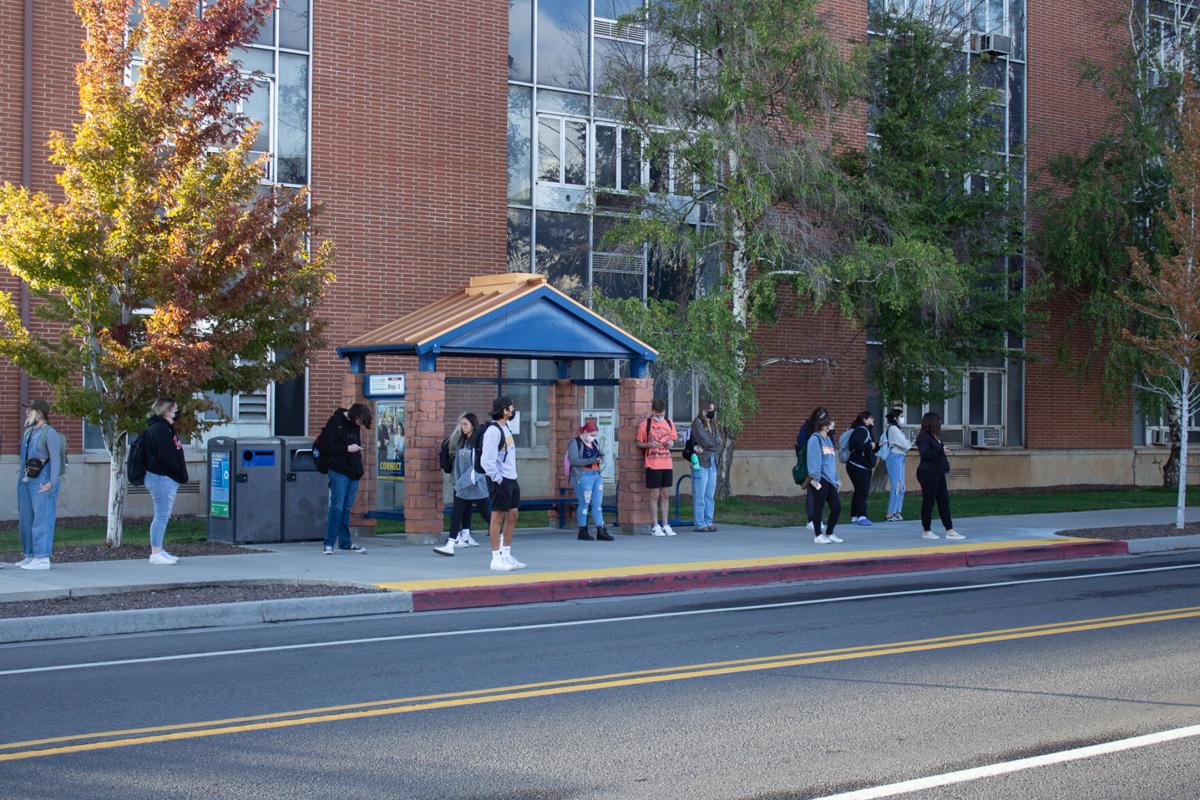 A group of students wait at the bus stop outside of the Biological Sciences building, Sept. 30. 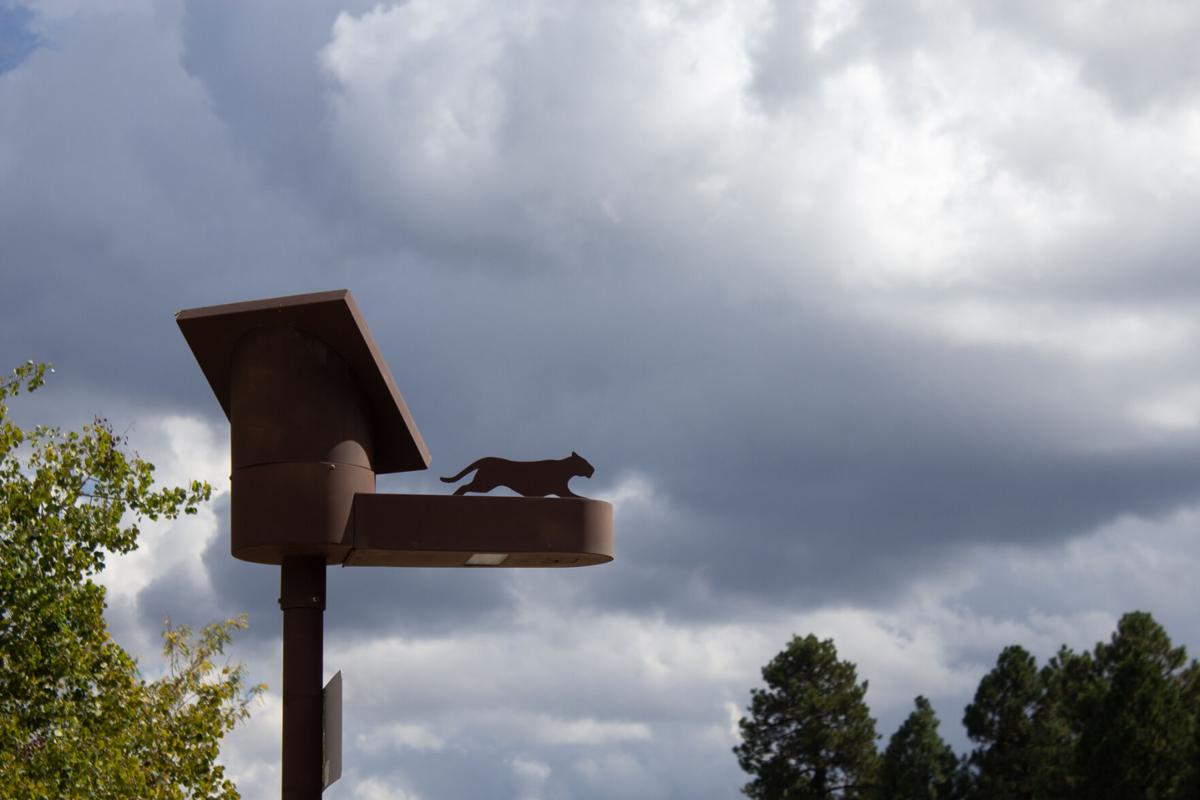 A Mountain Line bus stop sits outside of an off-campus apartment complex, Sept. 30.

A Mountain Line bus sits empty as it is running its route through campus and around Flagstaff, Sept. 30.

A group of students wait at the bus stop outside of the Biological Sciences building, Sept. 30.

A Mountain Line bus stop sits outside of an off-campus apartment complex, Sept. 30.

For students attending universities far from home, means of travel and transportation can be difficult. Many students, especially freshmen, are bound to experience these struggles at some point.

This year, freshmen are not the​​ only ones considered new students on campus — many sophomores are also arriving for their first year of in-person instruction. In 2020, sophomores could decide to home and attend virtually, thus sacrificing what would have been their first year on the Flagstaff Mountain campus. Bus routes are a source that many students, especially those without cars, have become reliant on, and popularity is likely to grow as the weather gets colder.

As students become accustomed to on-campus bus routes they are acquainted with the Louie and Jacks lines. However, Flagstaff’s Route 10 Mountain Line is still something that many find themselves easily confused by.

According to AccuWeather, temperatures will drop dramatically during October, and students will generally be less willing to walk to classes. When this happens, buses could be filled to maximum capacity — and wait times at stops may become much longer.

Late arrivals and appearances in class could be more common due to bus wait times. While this problem is different from unreliability, sophomore Chris Belanger said it happens every year during the cold season.

“[I’m] taking into account that NAU is now housing one of the largest student body populations it ever has,” Belanger said. “This year, the bus system can be expected to be at its worst in terms of making students play the waiting game. It’s not going to be an easy winter.”

However, circumstances can also become difficult when thousands of students bring cars, despite limited campus parking. It is this circle of transportation issues students find themselves in: are perceived and promoted as expendable, but the shuttle system causes difficulties.

Bringing a car to Flagstaff proves to be expensive and, at times, finding a spot is all but impossible. According to NAU’s website, annual garage passes are sold for as much as $640.

Even the $470 outdoor parking passes can be difficult for students to afford.

For a college student, traveling and going back home are not as easy as one might think.  For those who live within driving distance, finding a ride home may be overly difficult without a car. FlixBus is a bus service that offers routes from Flagstaff to Phoenix, Tucson and other areas.

Flixbus typically only has a few busses running, except on holiday weekends, per it’s scheduling on the website. Therefore, tickets sell out quickly, which leaves many students searching for alternative methods of transportation.

Other than FlixBus, students can also utilize Greyhound Lines and train rides as additional options. Greyhound, however, has inconvenienced some students recently.

Sophomore Savannah Ortiz explained her experience from two weeks ago, along with another over the last year. On Sept. 17, she said her bus was canceled, but after calling she was told it is not company policy to give out refunds. Ortiz’s other mishap came in October 2020, when her bus was three hours late and the company misplaced her luggage.

“During my ride on the bus, I received a phone call that told me my luggage was left behind and still in Phoenix,” Ortiz said in an interview conducted through email. “I have no clue how this happened, as my mom and I made sure it was on the bus ourselves, but I was devastated. It took a total of two weeks for me to even get it back.”

Students have had their fair share of Greyhound horror stories. Freshman Michael Boesl, who was also supposed to be on the bus with Ortiz in September, faced the same cancellation. He and a few other students who were supposed to be on the ride were rescheduled to a bus that afternoon, which Boesl said was mostly filled.

“Unfortunately, it’s like jumping through hoops to try to find a number to call Greyhound with immediate questions,” Boesl said in an interview conducted through email.

Boesel and Ortiz’s rescheduled Greyhound bus was supposed to leave by 4:55 p.m., but upon arriving, they were greeted by an empty parking lot. Additionally, a small note on the door stated the Phoenix bus would arrive approximately 30 minutes late, which was all the context given to passengers. When 5:30 p.m. came and went, there was still no sign of the bus, frustrations began to rise Boesl said.

Passengers soon learned the bus would not arrive until 6:30 p.m., nearly two hours late. With a ride time of approximately three hours, Ortiz and Boesl both said similar sentiments about not being enthused to be arriving in Phoenix shortly before 10 p.m.

Eventually, Boesl said the bus pulled up, much to the relief of the passengers who quickly filed into a line.

However, much to everyone’s shock, the driver stepped off and explained he only had 12 available seats for the 25 people with paid tickets who were waiting to board. Boesl said the  only recommendation the driver gave was asking everyone to call the customer service number.

Upon calling the number, customers only receive updates about Greyhound bus locations.  Inquiries about tickets and payments are not handled; instead, passengers are told to write emails petitioning for a refund or new ticket.

“Greyhound has proven to not be a supportive nor customer service based company,” Boesl said. “It is clear to see that they put the money ahead of the customer.”

Greyhound Bus Services made no comment involving the incident.

Overall, this semester is off to a rocky start in terms of transportation. However, considering everything that has happened in the past year — and with school finally coming together — services including transportation need to resume normal operations.  This does include transportation to a certain degree.